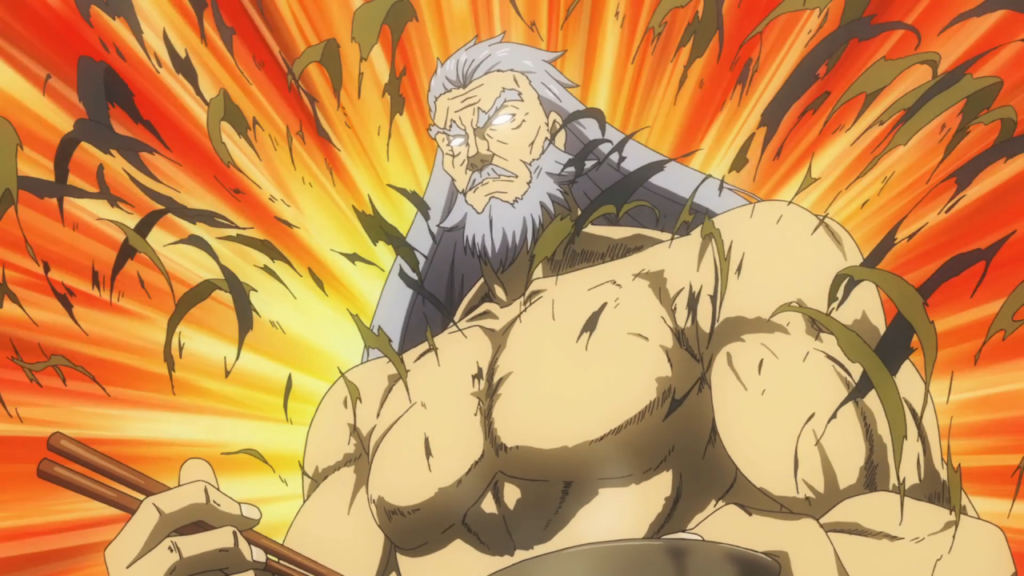 They say never judge a person based on their age and appearance, and this is so true in anime and manga. That’s why I want to pay tribute to the most powerful old men of anime and show why you shouldn’t underestimate them. If they wanted to, these individuals can channel some old man power to beat down their opponents with raw strength or unmatched skill. So here’s a list that breaks down ten of my favorite powerful geezers in anime. 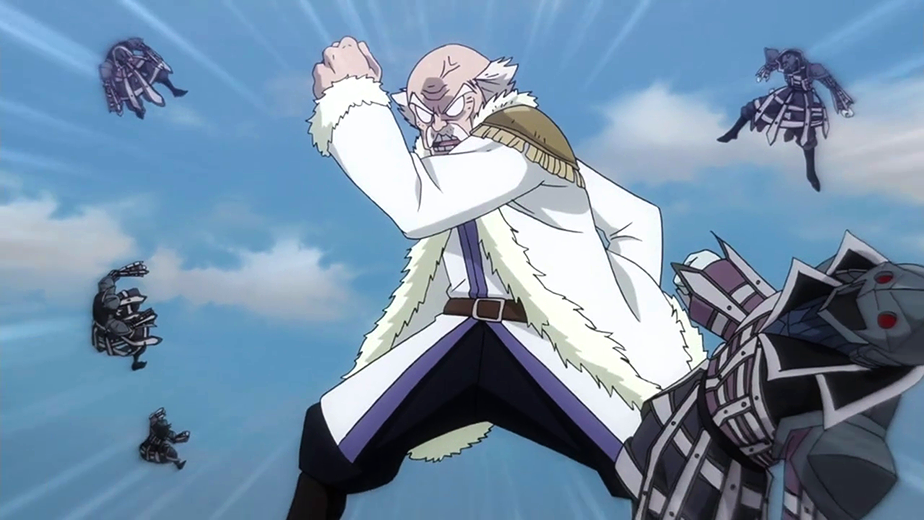 Makarov is Fairy Tail’s Guild Master and one of the elite Ten Wizard Saints. As the leader of Fairy Tail, his small, diminutive stature may not seem all that threatening. However, don’t test Makarov’s temper. He can channel his magic to grow to a giant size and can attack and defend using his exceptional light, fire, wind, and ice magic. His ace move, Fairy Law, destroys his opponents by enveloping them in a blinding light. Makarov’s experience and powerful magic make him a formidable foe for enemies. 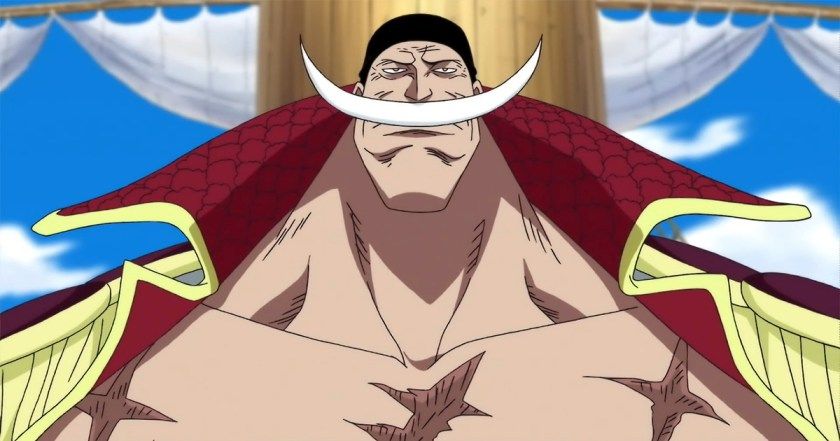 Whitebeard is the leader of the Whitebeard Pirates and was known as a close rival to legendary pirate Gol D. Roger. Rocking a stark white mustache and standing at a Titan’s height, Whitebeard is one of the most powerful figures in One Piece and allies himself with Luffy and his crew. Despite being 72 years old, he’s in excellent shape and has enough muscles to bench press some weights. 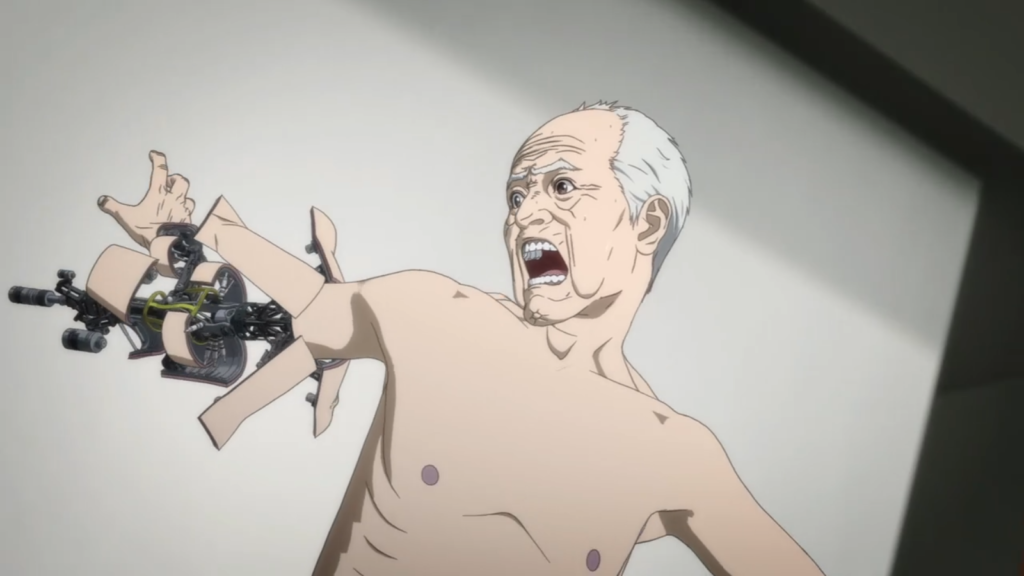 Ichiro Inuyashiki is a pitiable man. His family doesn’t appreciate him and everyone seems to take advantage of him. To make matters worse, he’s diagnosed with stomach cancer and doesn’t have long to live. Everything changes when an accident transforms his entire body into a robotic killing machine. In addition to superhuman strength and durability, his supercomputer brain allows him to access various types of communications. He’s also able to fly at soaring speed and can turn his arms into any type of gun. 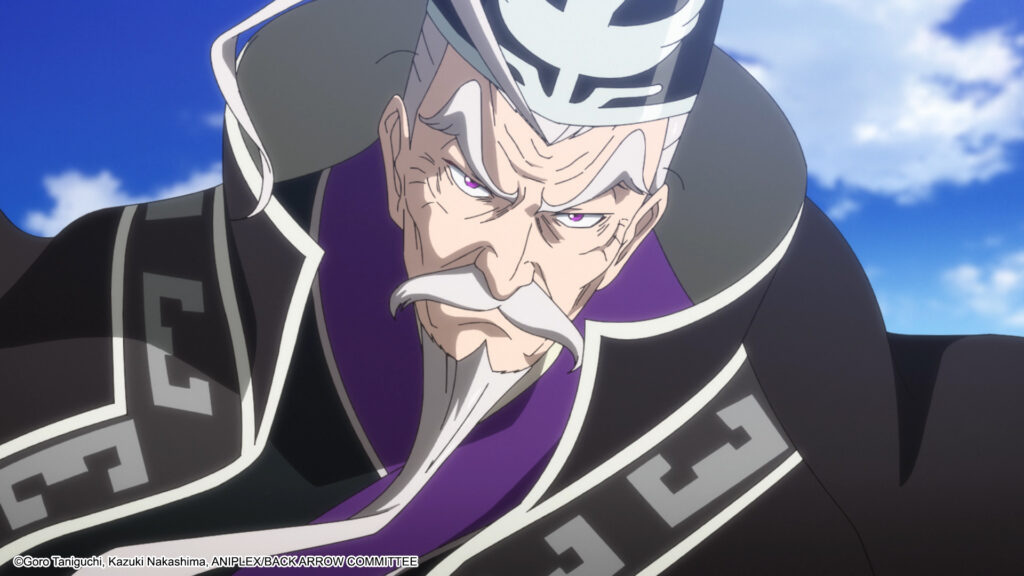 Emperor Zetsu is a well-respected leader in the Republic of Rekka and has a strong willpower that keeps him powerful in his old age. He’s able to control multiple mech robots at once and his charisma draws many soldiers to his cause. He’s also a cunning strategist and always has a trick up his sleeve to change the momentum towards his favor. He and protagonist Back Arrow seem to enjoy an adversarial relationship until the final battle when Zetsu channels all his power to defeat an enemy. 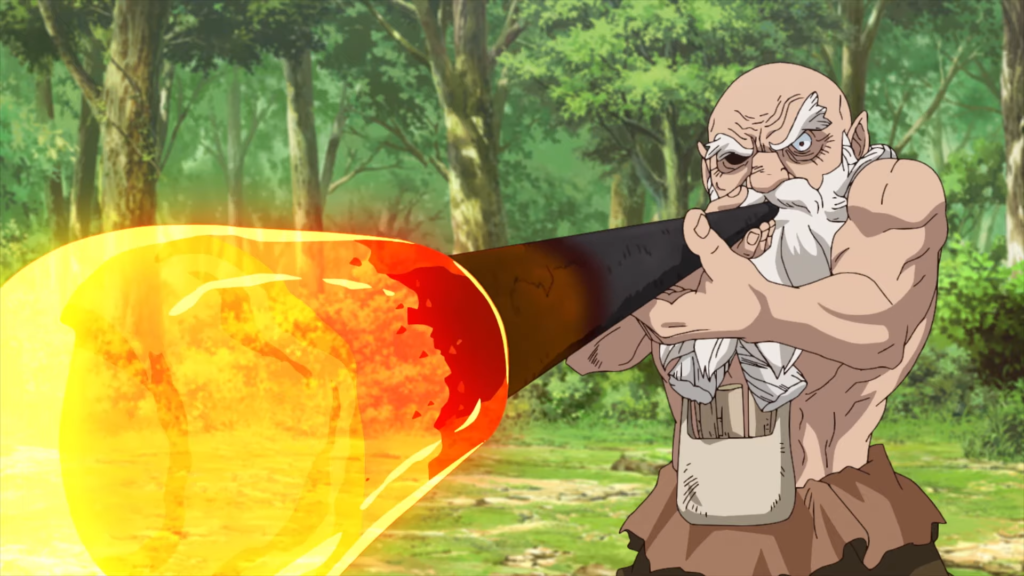 Kaseki is the skilled artisan from Ishigami village in Dr. Stone with impeccable crafting skills and a deep curiosity. An ardent supporter of the Kingdom of Science, he devotes much of his time helping Senku build modern technology. When clothed, he appears as a small old man. When he’s shirtless, however, he’s basically a well-toned hunk. His physical strength helps him lift and craft the toughest metals and rocks out there.

Hakurou (That Time I Got Reincarnated As a Slime) 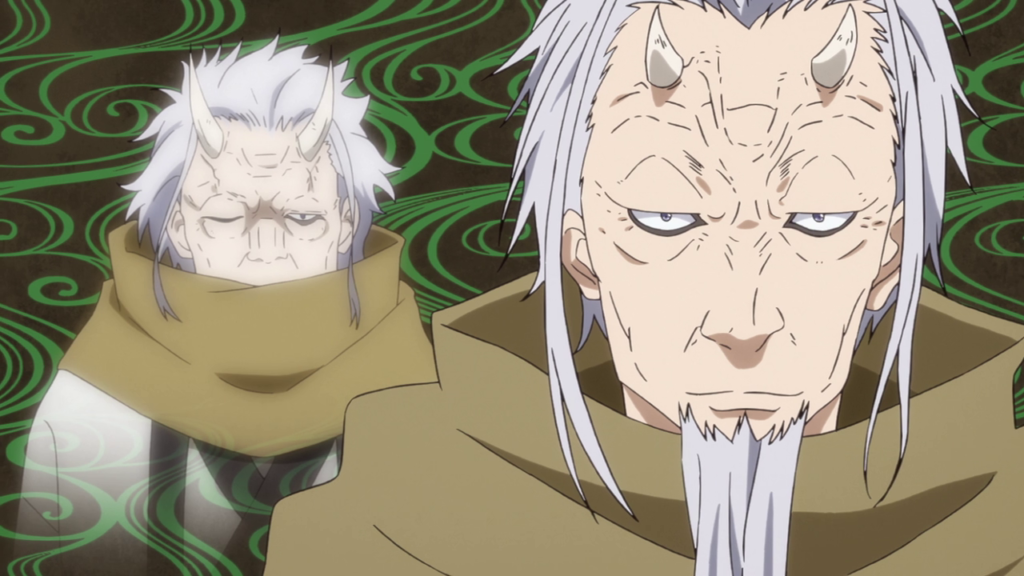 Hakurou originally meets his master, Rimuru, with three other wild ogres. After being accepted by him and given a name, he ages like fine red wine and develops supernatural sword skills that can strike down anyone in his path. Hakurou remains loyal to Rimuru and his calm demeanor makes him an unsuspecting foe to fight. He has since mentored a few apprentices, with Gobta often being his punching bag. 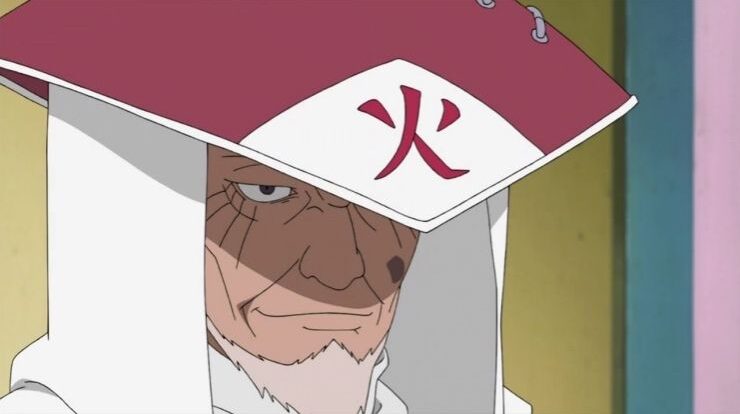 Known as the legendary Third Hokage and the God of Shinobi, Hiruzen mentored the three Sannin: Jiraiya, Tsunade, and Orochimaru. He’s one of the strongest characters in the series and has looked after a young, ostracized Naruto. His immense chakra allows him to channel powerful ninjutsu that summon legendary beasts and perform advanced sealing techniques. 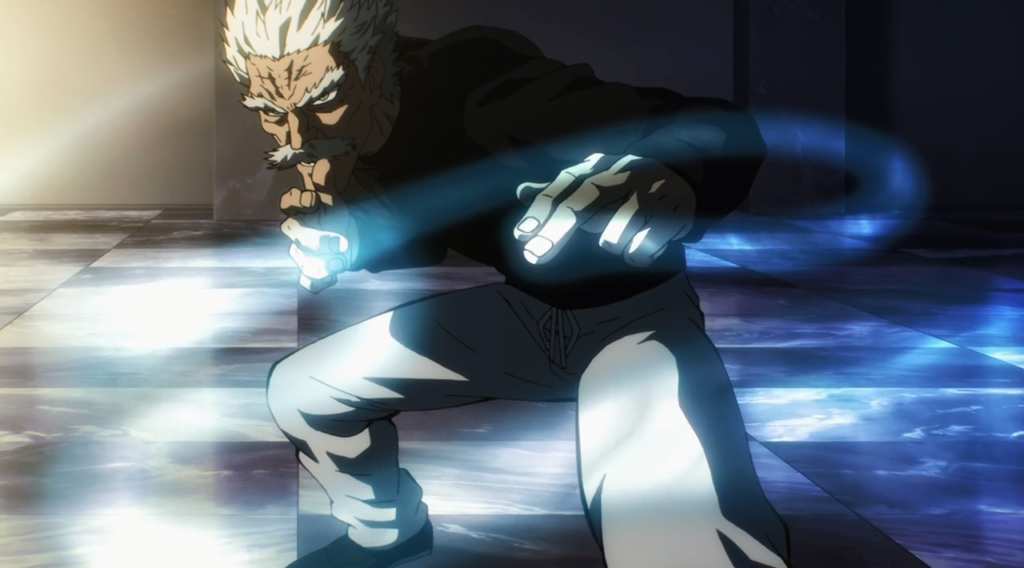 Veteran martial artist and professional hero Bang (aka Silver Fang) is a practitioner of the Water Stream Rock Smashing Fist. Silver Fang is the third ranked S-Class superhero and has absurd strength, speed, and reflexes that can pierce through an enemy’s body. Once you’re hit with his water Stream fist, you’re done. Despite his power and experience, he respects Saitama’s powerful abilities and has tried recruiting him to the dojo. 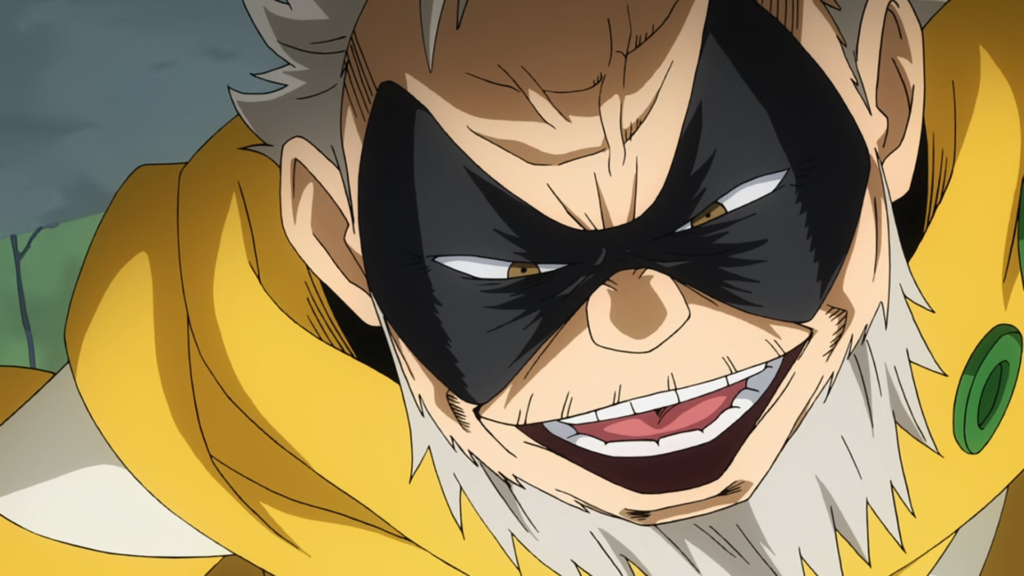 Retired pro hero Gran Torino is a speedy old man despite his small stature. He reminds me a bit of Yoda because he serves as a crucial mentor for both Izuku and Toshinori (All Might). When Izuku first met him, he thought Gran Torino was a senile old coot, but his keen intellect keeps him one step ahead of others. His quirk, Jet, grants him great mobility by letting air flow from the soles of his feet, increasing his speed, mobility, and kicking power. 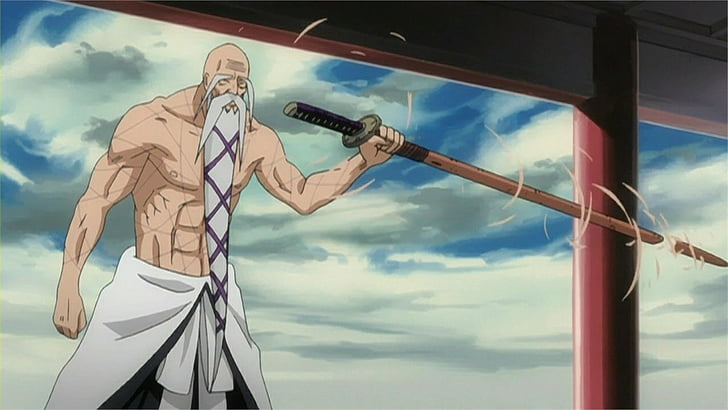 Shigekuni is the captain of the 1st division in the Gotel 13 and is known as one of the most powerful swordsmen in the Soul Society. He’s the founder of an elite training academy and wields a potent sword technique called the Hitotsume: Nadegiri, which cuts down opponents with precision speed and force.

He’s also a proficient martial artist with the ability to punch his way out of jams and utilize his great strength and durability to his advantage. Did I also mention he’s jacked when he’s shirtless. A lot of old men in this list are.

Anime always has its fair share of powerful geezers. As a top 10 list, we obviously couldn’t fit every one of them. Who’s your favorite powerful old man? Who did we miss on this list?