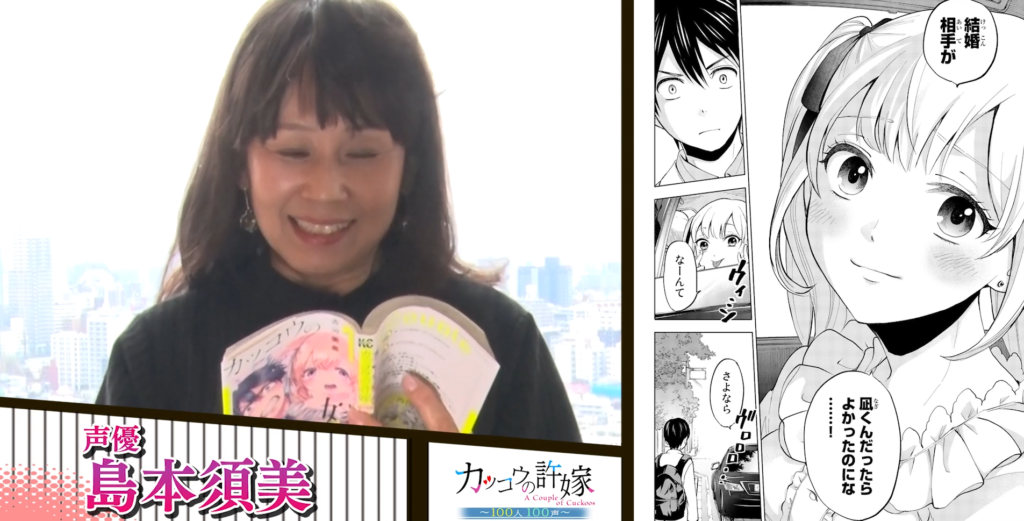 If you haven’t been intrigued enough by the record-breaking success of A Couple of Cuckoos to pick up the series yet, then Kodansha has launched a new campaign to try to convince you. Titled ‘100 Cuckoos,’ it sees 100 celebrities and industry figures come together to read the series and share their thoughts in YouTube videos shared daily via the official Weekly Shonen Magazine channel. Today’s video features SKY-HI from the idol group AAA, but there’s plenty more where that came from.

Initially launched on 14 February (Valentine’s Day, which is fitting given the series’ lovey-dovey theme), the 100 Cuckoos campaign started off with a flurry of activity, uploading three videos with three sets of industry figures. The first saw legendary voice actress Sumi Shimamoto (Nausicaä in Nausicaä of the Valley of the Wind, Kyouko Otonashi in Maison Ikkoku) apply her decades of experience to the role of Erika, opposite an unnamed Nagi. The idols of SUPER☆GiRLS then divided up the roles between them, after some debate. Konomi Kohara then took up the role of Sachi, for a change.

Even SKY-HI tried his hand at voicing Nagi in today’s video, but he was more interested in sharing his actual thoughts on the series. He’s not a voice actor, after all.

My first thought on seeing the concept behind the 100 Cuckoos campaign was that it couldn’t have been cheap to book out an hour of the schedules of one hundred industry figures, but I suppose money isn’t really a problem for A Couple of Cuckoos: it was one of the best-selling new series last year, coming in at number four on Hon no Hikidashi’s list of highest-selling first volumes.

Furthermore, with 96 more videos set to come over the coming weeks and months (if my calculations are correct), then this’ll provide even more promotion for A Couple of Cuckoos, boosting sales even more and netting Kodansha even more money. It’s a harmonious circle.

You can keep up with the 100 Cuckoos campaign via the official website. Incidentally, the first three volumes are available to read in English now from Kodansha Comics.