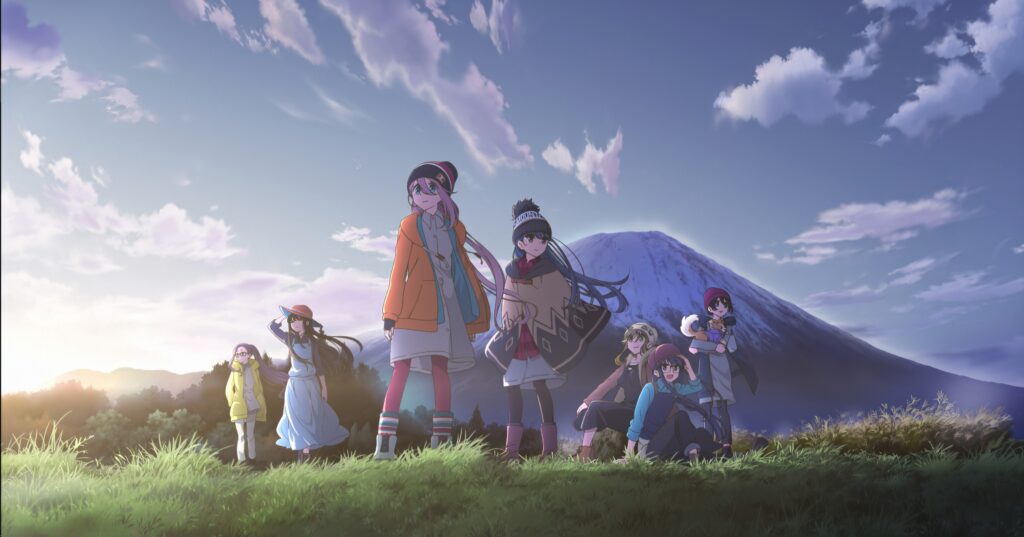 One thing is abundantly clear: as a society, we’ve established that anime like Yuru Camp (Laid-Back Camp) are the most comfy series for maximum warmth and happiness. Yuru Camp has completely taken over social media and inspired a new generation to want to embrace and enjoy the great outdoors. Exemplifying the iyashikei genre, its outdoor tales have proven to be the perfect balm for our weary Vitamin-D-deprived souls during this past hellish year of quarantine.

Waiting for a new episode of Yuru Camp Season 2 each week can feel like an eternity. In the hopes of filling that void, we’ve compiled a list of anime like Yuru Camp with a similarly familiar and comfortable atmosphere; shows that you can flip on after a hard day of school or work; shows without drama or faced-paced action. These are series that will leave you feeling warm and happy, and that’s something we all need right now.

Let’s start with a cup of hot tea. 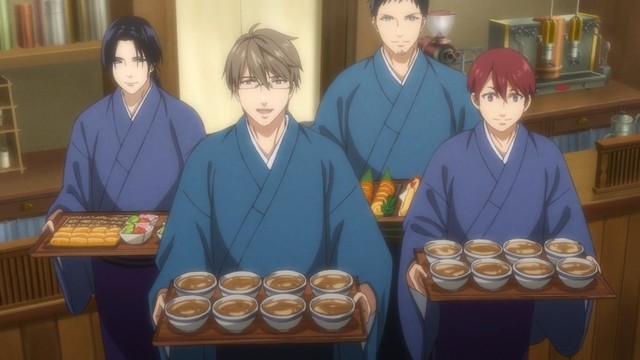 A group of handsome young men are ready to welcome you to a tucked away tea house in the middle of Tokyo, hidden behind thick bamboo in the neon city. Yotsuiro Biyori is a series which makes the food look utterly delicious, and one which seems very much like a shoulder to cry on: the kind hearted cafe staff take turns listening to visitors’ worries and problems, doing anything in their power to solve them by the episode’s end. This is a slice-of-life series perfect for all audiences who need a pick-me-up.

Go pull up a seat at the café and get something off your chest. Yotsuiro Biyori is streaming now on Crunchyroll.

A unique and futuristic tale set on Mars focusing on gondola rowing? It’s hard to describe everything that Aria is; but since the anime series came to the west back in 2008, it’s constantly mentioned as one of the most gorgeous and scenic series (with a soundtrack to match). The story follows a girl named Akari in her journey to become a master gondolier; a lofty goal, but one which isn’t at all rushed. Over each season, we find ourselves traveling much like the rivers we see on screen: leisurely, without a fuss.

All three quiet and calming seasons are available to watch on Crunchyroll. (And a brand new film is coming this March!) 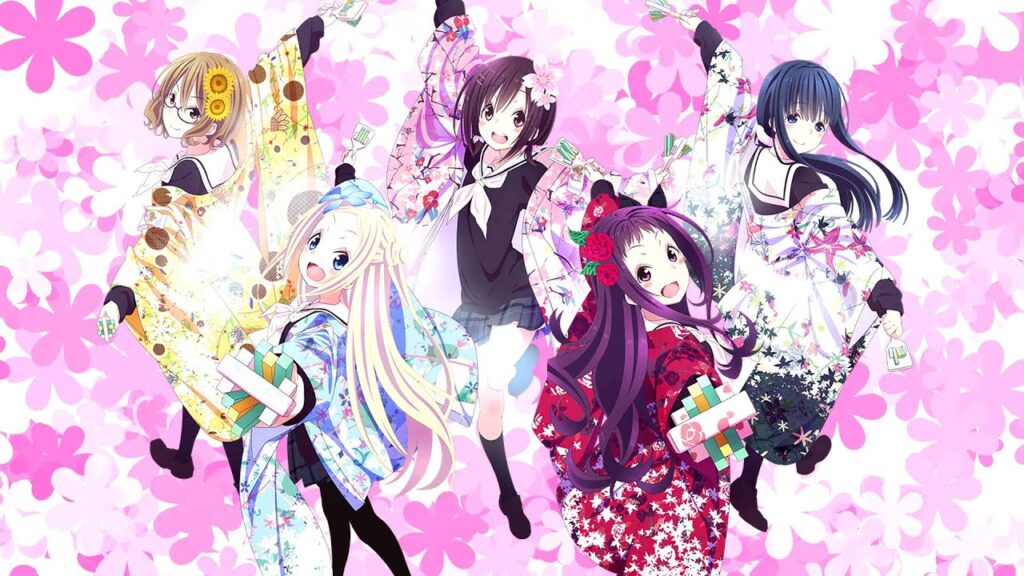 Have you ever heard of yosakoi dancing? An energetic form of Japanese dance, it mixes the traditional with the modern. In Hanayamata, schoolgirl Naru finds herself suddenly obsessed with the art after seeing a beautiful blonde girl practicing yosakoi in the moonlight. As cliché as its themes may be on paper, the anime is sweet like candy, giving us bright colors, close friendships, and some of the most gorgeous animation we’ve ever seen. It reminds you to do what you love, and more importantly, reminds you that not being perfect at everything is totally okay. That’s a message we can get behind.

This fanciful blend of traditional Shikoku culture and pastel-soaked fairy tales is ready to watch now on Crunchyroll. 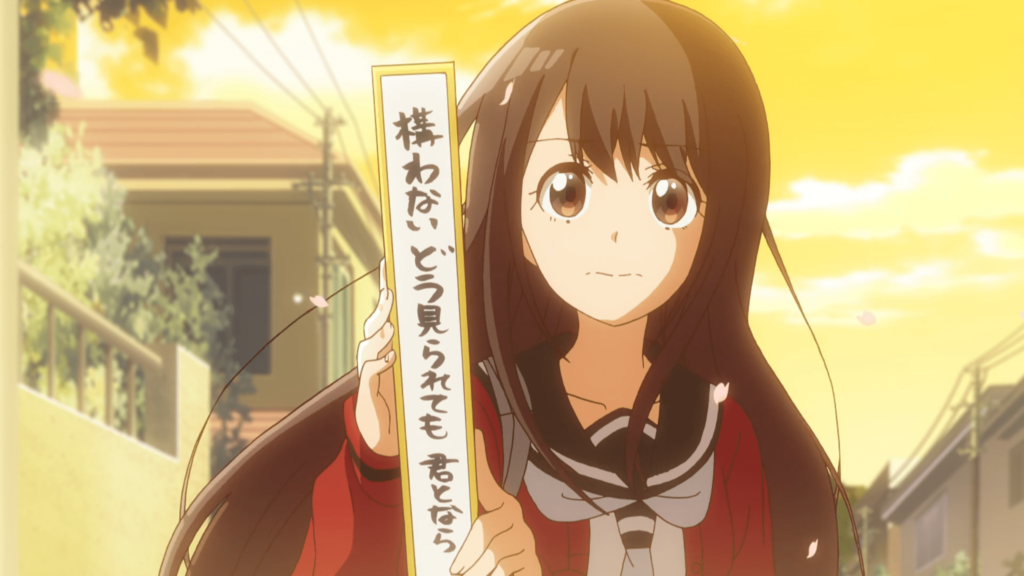 It may come as no surprise that a series about poetry is wonderfully quiet. The main character Nanako only communicates through short poems which she writes down when needed. A love story at its core, there’s something about the series which makes you want to crack open a classic book or write something of your own. It oozes creativity, and each episode will leave you with a smile on your face (often more than once.)

With bite-sized 12-minute episodes, Senryu Girl is an anime like Yuru Camp, in which you can sneak in any time you need a pick-me-up. Yes, it’s on Crunchyroll. 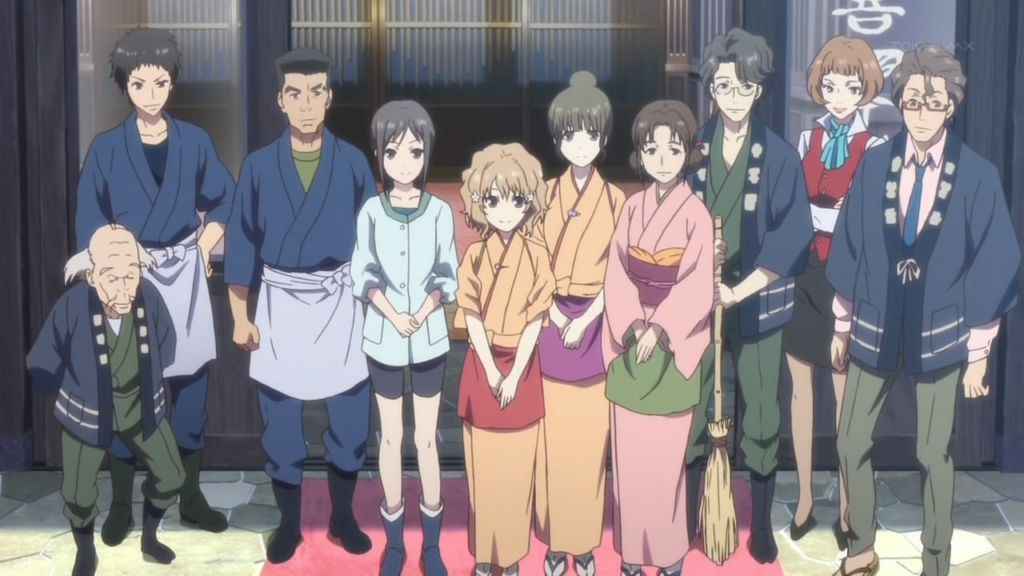 Previously mentioned in our piece highlighting traditional Japanese culture in anime, Hanasaku Iroha proves itself as an intro to life at a hot spring inn. 16-year-old Ohana learns the ins-and-outs of hospitality, interacting with an ever-evolving cast of excellently written characters. The realistic animation will make you feel as though you’ve traveled to Japan, with a score capable of upping the whimsy. We’d recommend watching while in a warm bath, if at all possible.

Soak in a hot spring and rent a room at Kissuiso Inn. Hanasaku Iroha is available now on Crunchyroll. 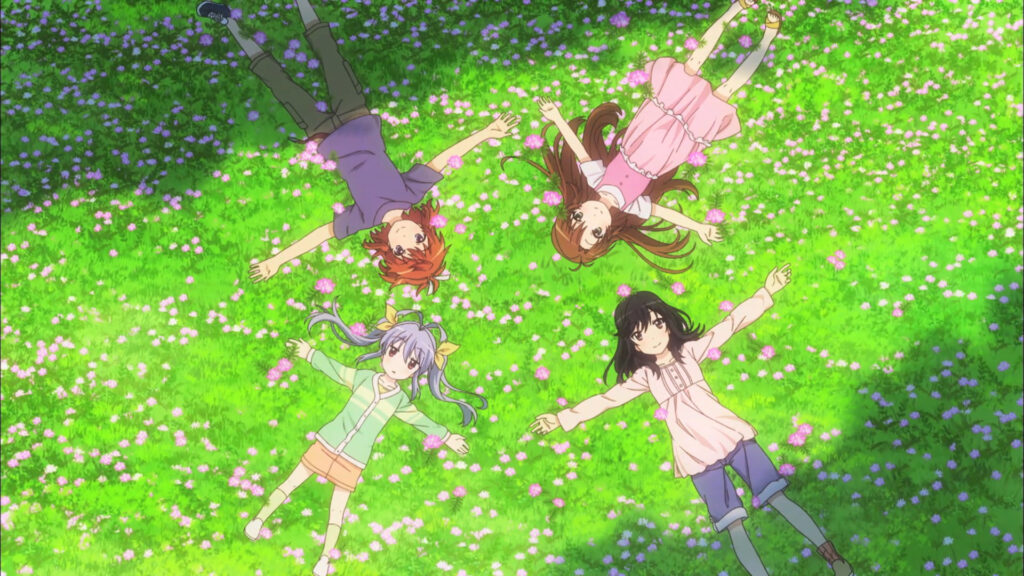 An entry which likely needs no introduction, Non Non Biyori often follows Yuru Camp in discussions about which anime series is the coziest. The extremely simple story follows a group of young girls living and going to school in the very rural village of Asahigaoka. Their days are filled with nature and hijinks, with no konbini or shopping malls to speak of. Oh, and their school only has five students. It’s a glimpse into a quieter life somewhere far away, and always manages to lift our spirits.

Season 3 is currently airing on Crunchyroll, with the previous seasons also available to binge (or re-binge.) 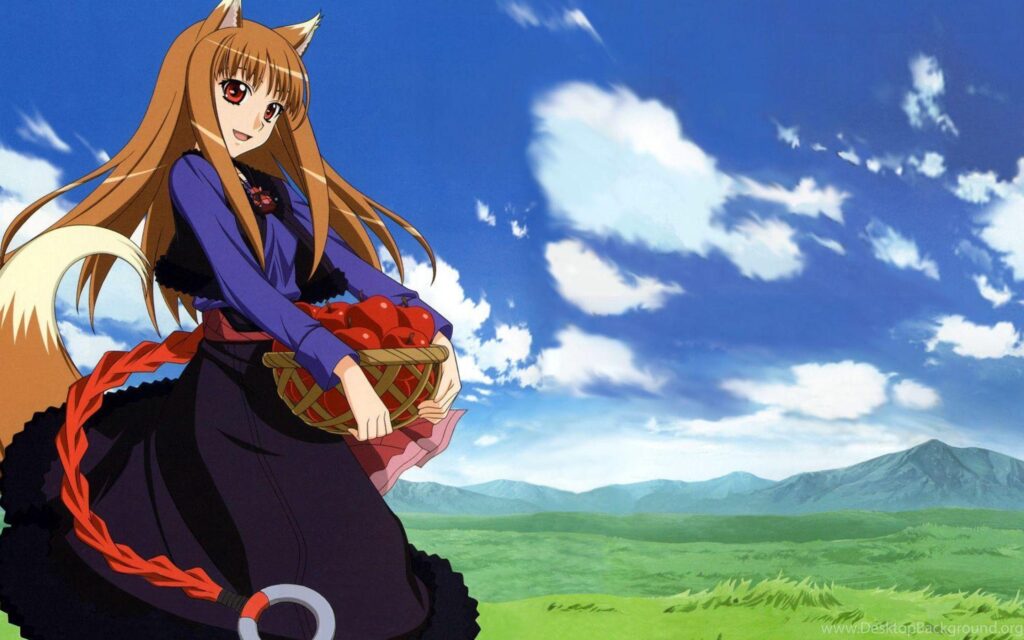 It’s not the first series that comes to mind when looking for anime like Yuru Camp, but the popularity of this series knows no bounds. People are so desperate to live in the European-style world of Spice and Wolf, that a recent VR crowdfunding campaign earned 453% of its original goal. The series does something unique in its historical setting: it follows a merchant instead of a soldier. One day, traveling peddler Kraft Lawrence finds a wolf-deity in his cart, and the rest is history. With gentle melodies and sweeping plains, it’s difficult not to be swayed to sleep as you watch this curious love story unfold.

Jump in the back of the cart and catch the series streaming on Funimation and Hulu. 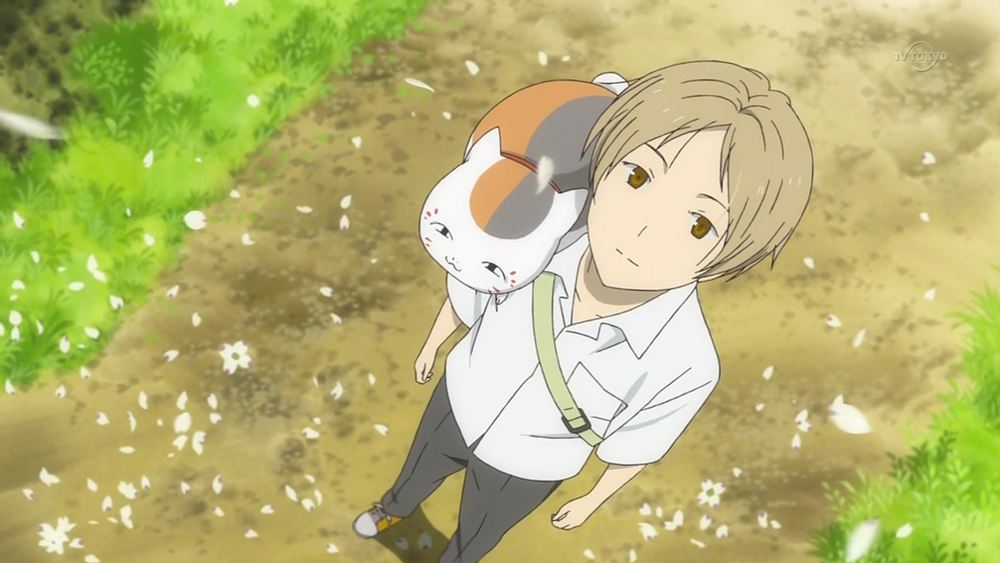 Natsume has always had the ability to see spirits, a power that isolated him from his peers growing up. But when his grandmother dies, he finds himself in possession of a literal book of friends; or, at least, spirits she had forced into servitude. Seeing a chance to do good, Natsume decides to find these spirits and sever their bonds, setting them free while avoiding those who wish to take the book for evil purposes. Natsume’s Book of Friends has a constant air of optimism, with some adorable spirits to inspire a merch haul or two. We’d say it’s the perfect series for when loneliness has you feeling down.

Join Natsume on his journey from the very beginning: the first season is on Crunchyroll. 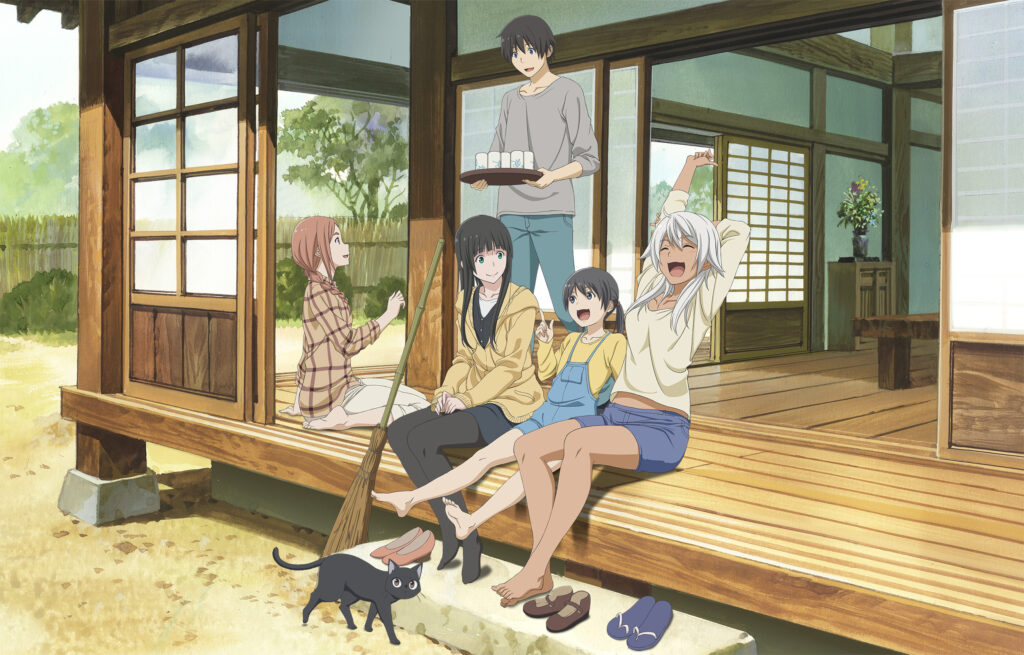 With many calling this yet another pinnacle of the iyashikei genre, you won’t want to miss out: head over to Crunchyroll for some complete and utter tranquility. 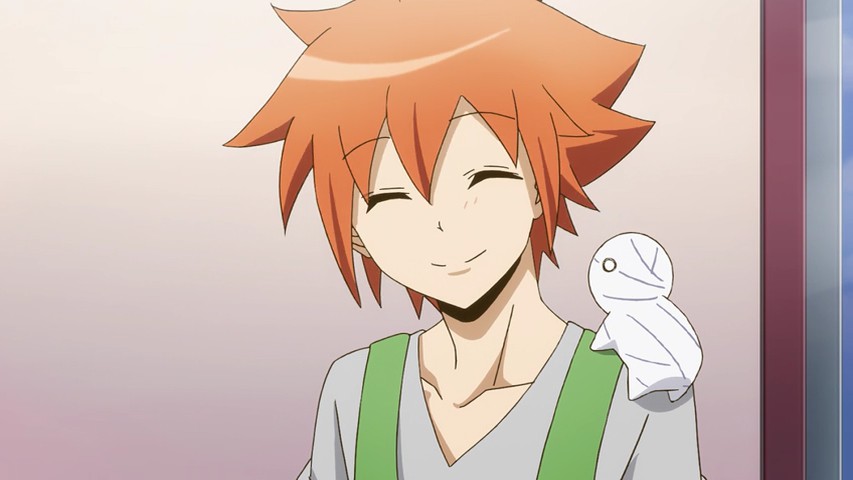 Sometimes, what we need is something tiny and adorable to help us relax. It’s why cat videos are so popular on YouTube, right? It’s impossible to watch this series and not just grin constantly during every episode! Sora, a young boy, is sent a tiny Egyptian mummy by his father, and when he awakens, he proves to be very useful, enjoying doing the chores and sewing. The fact that he fits in Sora’s pocket and cries when he screws something up is just a bonus. Honestly, you just need to watch it for the chance to say ‘aww’ 8,000 times. 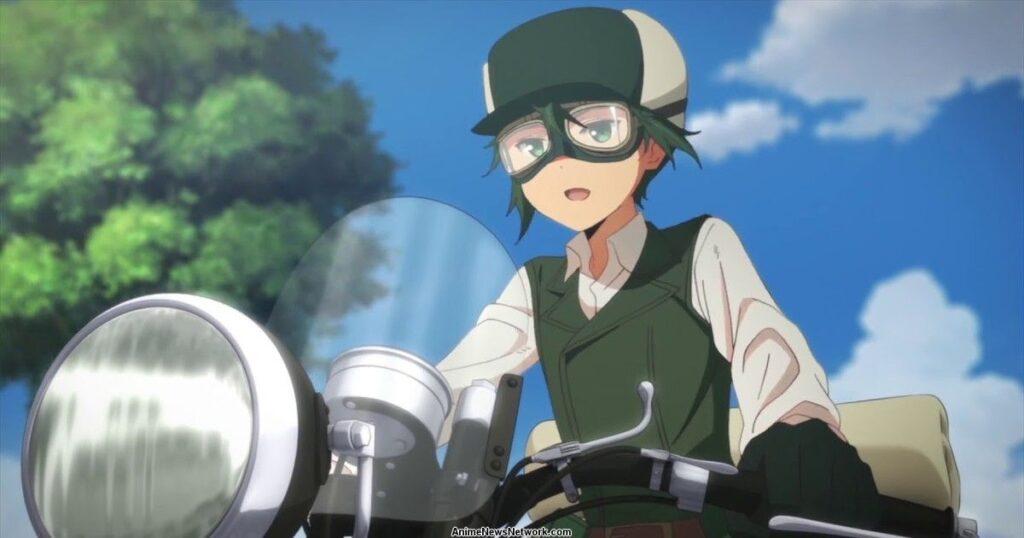 Any story which invites the viewer to explore another world has a chance to be calming. After all, what’s more calming than simply leaving our planet and problems behind? Kino likes to spend just three days in each new place they visit, learning all there is to learn, before moving onto the next. The freedom of the series is good for the soul and is the reason why it’s had such staying power. The light novel dates back to 2000, and the most recent TV series came in 2017, proving that we all just need a chance to get away.

Contemplate the beauty of the world as you journey with Kino and her talking motorcycle on Crunchyroll and Funimation.

Do any of these anime like Yuru Camp look up your alley? Are you all ready to curl up with a piping hot cup of tea and a fluffy blanket? Are there any we left off the list? Head over to our Discord and let us know! Who knows: a part two might be incoming. The world needs it.