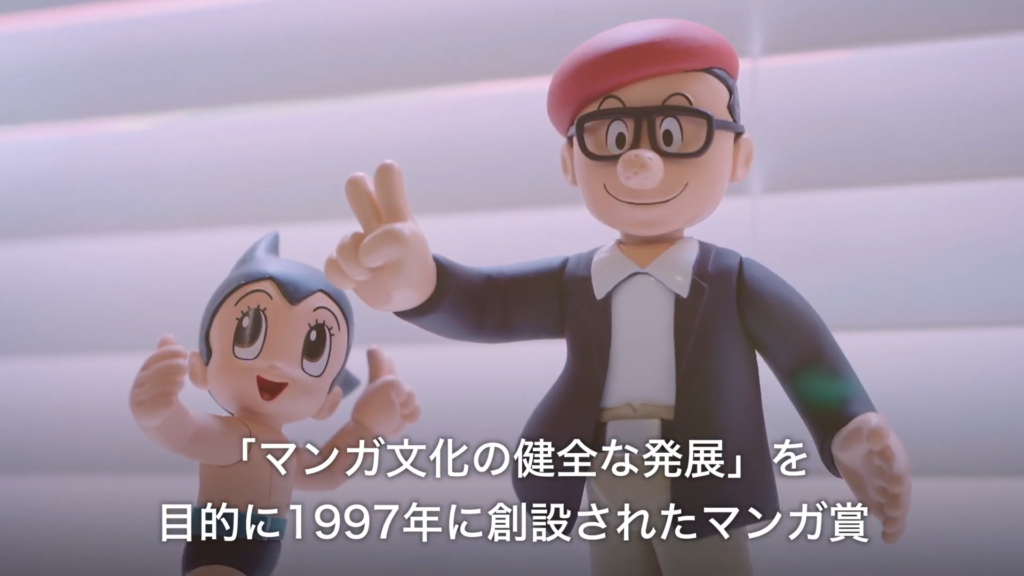 The Osamu Tezuka Cultural Prize is awarded every year by a panel of judges to creators that best follow the “Tezuka manga approach,” rewarding individuals or organizations for their “wholesome contributions” to the world of manga. This year’s winners were already announced back in April, but the award ceremony was unfortunately postponed due to the spread of COVID-19. Asahi Shimbun has just put together a special video to commemorate the winners of this year’s 2020 Prize, however, featuring several interviews and interesting conversations.

First up was Kan Takahama, who received the Grand Prize this year for her series Nyx no Lantern. Taking place in 1870s Japan, Takahama admits that she has drawn a lot of “dark series” in the past but wanted to create something “a little more cheerful” this time around. At first, she was surprised to receive the 2020 Osamu Tezuka Cultural Prize, but felt “more of a sense of responsibility” once time had passed. She also expressed her gratitude and surprise at being allowed to put together six volumes by the publisher, as well as the fact that young readers were able to buy them despite costing over 1000 yen.

Retto Tajima, recipient of the New Creator Prize for Mizu wa Umi ni Mukatte Nagarere, appears behind a caricature in this 2020 Osamu Tezuka Cultural Prize video and is one of two to do so. Recounting her thoughts upon receiving the prize, she said that she thought she “didn’t need” to tell her parents about it since they already read Asahi Shimbun, but received a sudden call in the morning when the results were announced! She expressed her gratitude to the readers for “letting her eat” and also said that she wants “music to play” within them whenever they read one of her manga. Her particular aim in drawing Mizu wa Umi ni Mukatte Nagarere, by the way, was to “politely” depict the cuteness of a girl in contrast to other authors, many of whom are also “obsessed” with this.

Yama Wayama also appeared behind a caricature for her segment in this 2020 Osamu Tezuka Cultural Prize video, having received the Short Work Prize for her manga Muchu sa, Kimi ni. As a new creator, this prize came with a fair bit of responsibility and Wayama was even “fearful” that she didn’t deserve to receive it: Muchu sa, Kimi ni was a “self-satisfying” manga, drawn for no one but herself and published online, with no interference from editors. Nevertheless, she says that the prize “gives her courage” and promises that she’ll continue to draw manga, hoping that the readers will come along with her.

The late Machiko Hasegawa was the final recipient of the 2020 Osamu Tekuza Cultural Prize, winning the Special Prize for Sazae-san in recognition of what would have been her 100th birthday on January 20. Director of the Machiko Hasegawa museum, Junji Kawaguchi, accepted the award on her behalf and talked about how while the late creator was very “shy” and didn’t often meet with other mangaka, Astro from Astro Boy did appear in one of the Sazae-san stories. So, she would have been very honored to accept this award bearing the name of Tezuka.

Finally, Makoto Tezuka – Osamu Tezuka’s son and director of Barbara – congratulated the winners of 2020 Osamu Tekuza Cultural Prize and talked about how important manga was “in this time of large societal problems” in the sense that it can “give us happiness and help us unwind” in much the same way as it did for Tezuka and his generation after the Second World War. I couldn’t agree more.

You can read more about the 2020 Osamu Tezuka Cultural Prize via Asahi Shimbun.