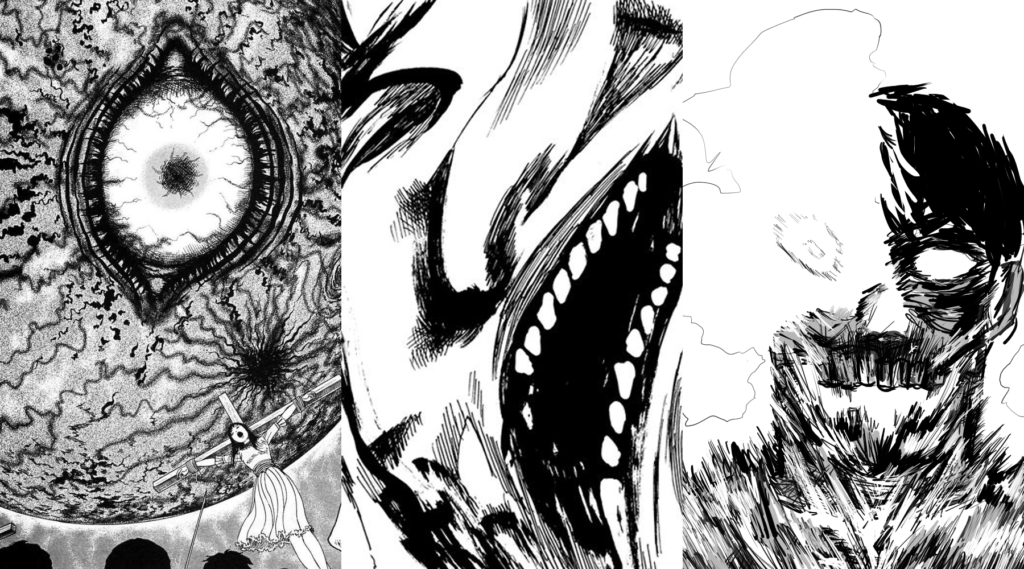 We gave you a list of left-of-center anime to watch, best enjoyed after your partner or parents have safely departed to their slumber. Only then can you truly savor fine wines like Welcome to the N.H.K. or Boogiepop Phantom, both incredible but require some precise timing and maturity on the part of the viewer.

Of course, plenty of manga fit this bill too and we’d be remiss to not share a few of our favorites. Now we’re not using the phrase ‘unsettling manga’ as a synonym for horror alone (though some of that’s here), and for that we reason we’re opting not to include any Junji Ito on the list.

If you’ve stumbled on this list, you already know Junji Ito.

Chainsaw Man forced audiences over to its gorey side by redefining what a Shonen Jump title could look like. Despite all of its excessive violence and death, given weight through truly sublime story-telling, Fujimoto’s previous work Fire Punch may well win out in an unsettling manga contest.

Not quite as ambitious with its pen, the tale of the eternally burning Agni, who continues to burn simply because he cannot die, traveling through a post-apocalypse to combat an Ice Queen goes some very unexpected places for an action comic right off the bat.

Loved by the people who actually know what it is, Kurosagi Corpse Deilvery Service always unsold for just how good the comic is. It is the only traditional horror comic on our unsettling manga list, smack dab with one evocatively grizzled splash page after the next, depicting all sots of post grave contortions.

The manga centers around a group of college kids who work as corpse retrievers part time, and the reason we recommend this over Otsuka’s more famous MPD Psycho, is that it somehow retains a lot of heart despite being so creepy.

3. Blood on the Tracks

We clipped some art from Shuzo Oshimi’s Happiness for this piece’s cover, and you can read more about that artistically boundary pushing look into depravity here, but tit for tat his newer Blood on the Tracks bores deeper into your bones the further you read.

Much like how a Godspeed You! Black Emperor album only starts to crescendo after 60 minutes, but once it does there’s nothing like it, each volume of Shuzo Oshimi’s most unsettling manga insanitizes bit by bit voyeuristically watching a family get pushed to the brink because of a certain person’s unbelievable actions.

Audiences would have otherwise never heard of Hideo Yamamoto’s mystifying Homunculus, if not for a surprising move made by the Netflix original that has unsurprisingly led people to believe it’s only okay.

Centering around a homeless man who agrees to let an unlicensed doctor drill some holes in his head in hopes to commune with the paranormal, and the hallucinatory world he enters, Homunculus’s dark descent into how the subconscious seeps into our personalities like poison makes for one of the most unsetting manga out there.

Too bad it’s not legally available in English.

The original No Longer Human novel was written by the seminal Osamu Dazai (who is not just a character in whatever Bungyo Stray Dogs is) and it’s a book just about every person who grows up in Japan reads at some point in school. Multiple film, manga, and other miscellaneous adaptations have been crafted from its 100 odd pages, including a more recent take by horror god Junji Ito, but we have to tip our hat to Usamaru Furuya’s 2009 manga adaptation above the rest.

It is such an unsettling manga he actually drew it twice, mirrored by hand for overseas release. Only a mangaka as equally salient as he is willing to get into that Shintaro Kago style muck could accurately cultivate Dazai’s one-of-a kind harrow novel atmospheres in comic form.