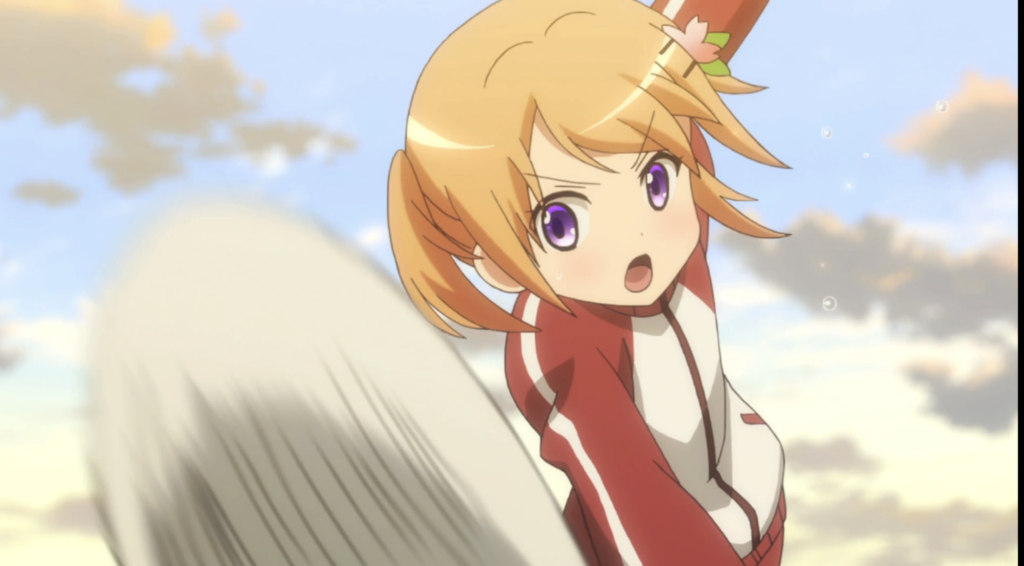 Typically, ‘that one sports episode’ will feature the usual gang of characters playing a game of sportsball. In some cases, this is because the series is a comedy, and parodying the sports genre is a great source of laughs. But it can also be similar to the beach or vacation episode, where it represents a break from the usual routine.

In addition, school-themed anime series will often have an episode dedicated to the local school Sports Day festival. While the ‘sports’ featured in these episodes are often wacky or unconventional, they still promote teamwork, fair competition, and aiming for victory. 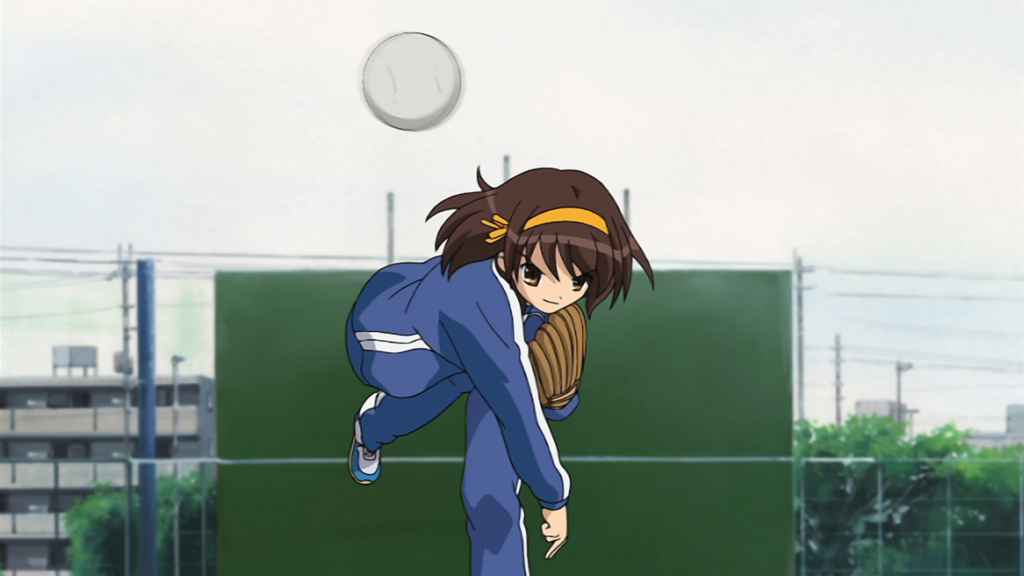 The Boredom of Haruhi Suzumiya features the SOS Brigade taking part in a baseball tournament. It’s a fun, absurd episode which pokes fun at the sport. It’s also a canon chapter in the third light novel.

The episode is something of a callback to the very beginning of the Haruhi Suzumiya franchise. In the first episode, Haruhi briefly joins every club at school, including the sports teams. It’s clear that she is not just an eccentric, tsundere genki girl, but an athletic one as well.

Boredom highlights Haruhi’s active, competitive side, as well as her desire to have fun at all costs. (And in this case, having fun means winning.) It also gives Kyon plenty to complain about, as it’s painfully obvious that the rest of the brigade isn’t as skilled as Haruhi. Mikuru is adorably helpless as usual. In the end, Kyon needs Yuki’s alien power to force the SOS Brigade to win; and avoid certain disaster in the process.

You can find the episode at Funimation. 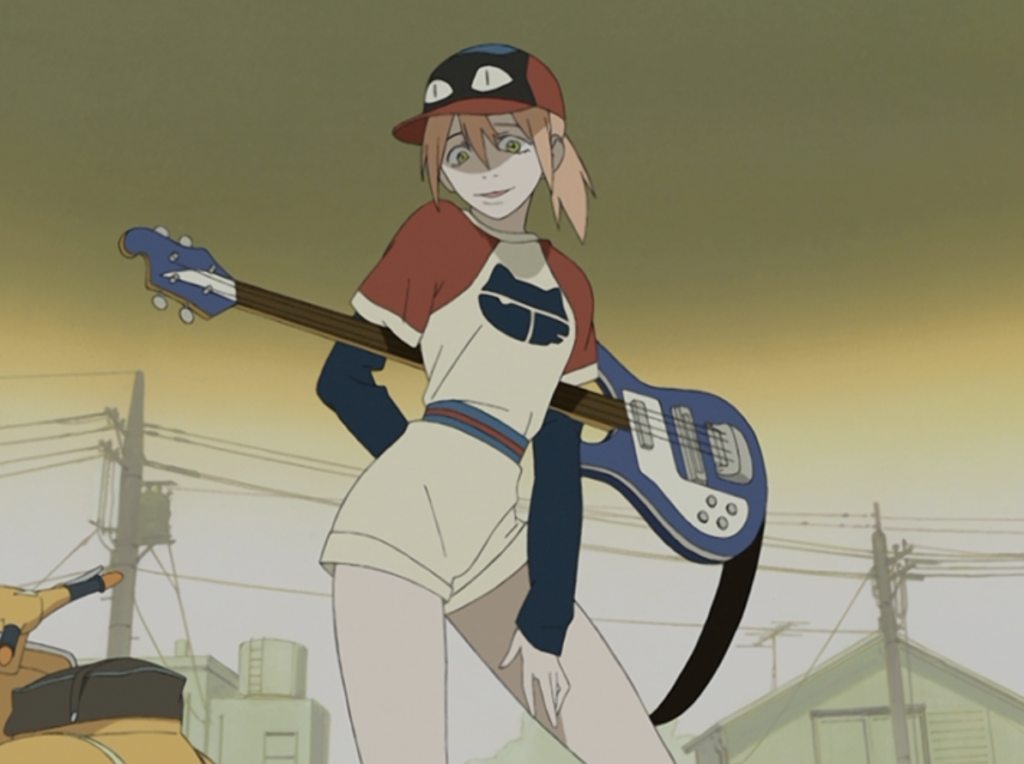 At the beginning of FLCL, it’s revealed that Naota’s big brother has gone off to America to become a star in the big leagues. Naturally, baseball becomes a major symbolic theme throughout this unusual, philosophical, and metaphysical growing-up series.

But Full Swing really emphasizes the sport. Given the nature of the series, it’s a weird, metaphorical take with a lot of sexual innuendo and hidden meanings, but it’s fun. The alien Haruko is unnaturally good at hitting and pitching. (The superpowered robot Canti also plays defense with predictable results.)

Naota is horrible at the game, and being in the shadow of his brother doesn’t help. In the end, Naota’s big ‘hit’ comes in the form of a baseball-shaped bomb. He’s only able to knock the ‘ball’ into space with Haruko’s help. 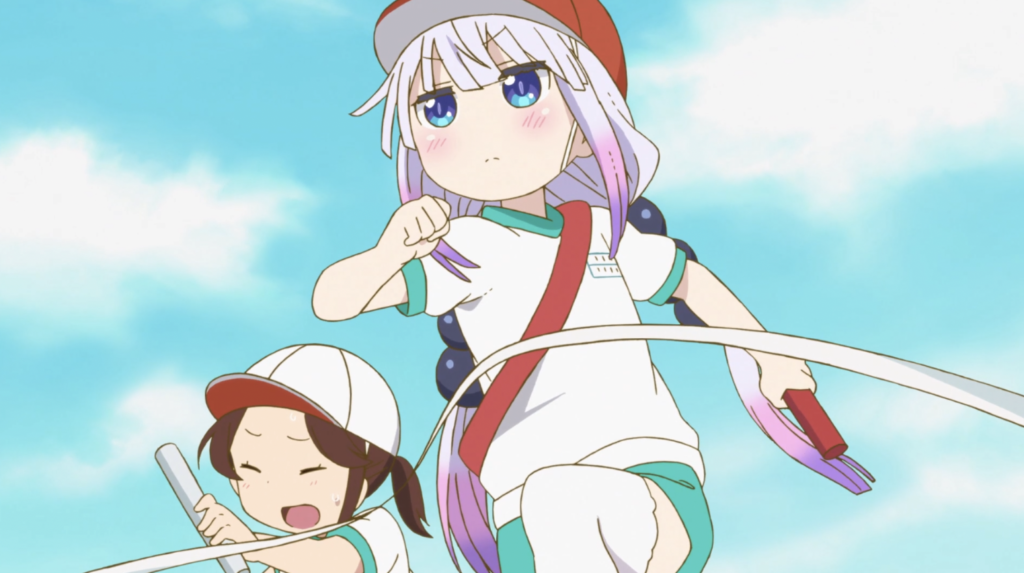 This episode falls into the classic ‘school sports festival’ category, but it’s also unique and touching. It focuses on Kanna, the youngest and cutest of the dragons.

Initially, she has no idea what an elementary school sports festival involves, but she’s still excited about it. Unfortunately, she also has trouble getting Kobayashi to come to the festival. Eventually, Kobayashi works extra hard so she can take time off for the big event.

Once the actual festival arrives, there’s a lot of cute gags and silliness, some pure sweetness, as well as a little bit of Kanna/ Saikawa third-grade yuri crush.

You can watch the episode on Crunchyroll. 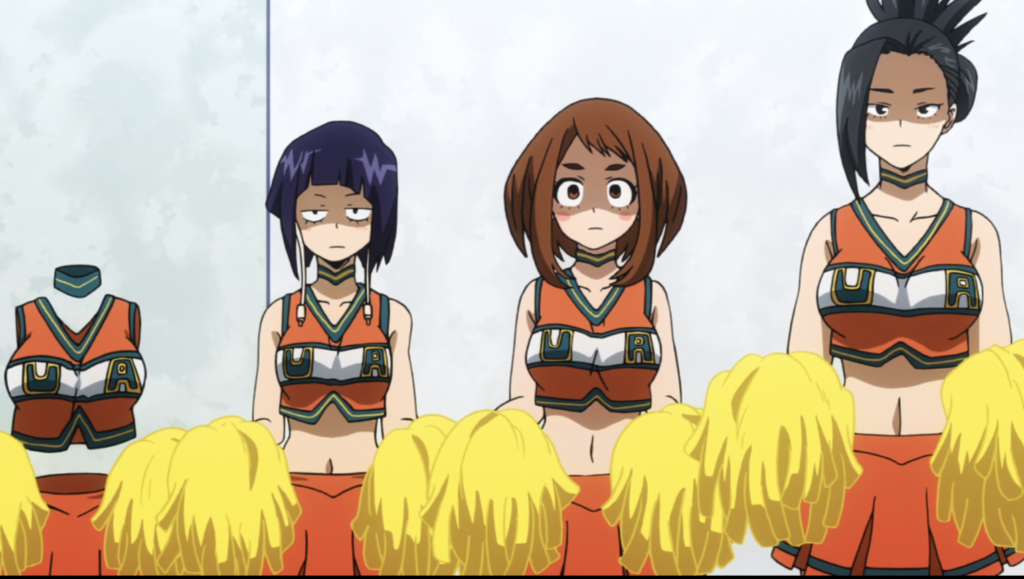 My Hero Academia takes a superhero series and applies school anime logic to it. Naturally, U.A. High School would have a sports festival.

Of course, the U.A. version combines the typical school sports festival stuff with events modified to take advantage of the school’s superpowered student body. And, in case students aren’t enthusiastic or excited enough about the event, pro heroes watch the festival and pay attention to the winners. The sports festival is clearly serious business.

And the events are entertaining. The obstacle race, the cavalry battle, and the final battle tournament give all of the various young heroes-in-training opportunities to show off their powers. Cheerleader Ochaco also makes an appearance (more cute than sexy).

The arc starts in season 2, episode 14; although the actual event starts in episode 15.

‘Cocoa and Murderous Intent Without Malice’ from Is The Order A Rabbit? 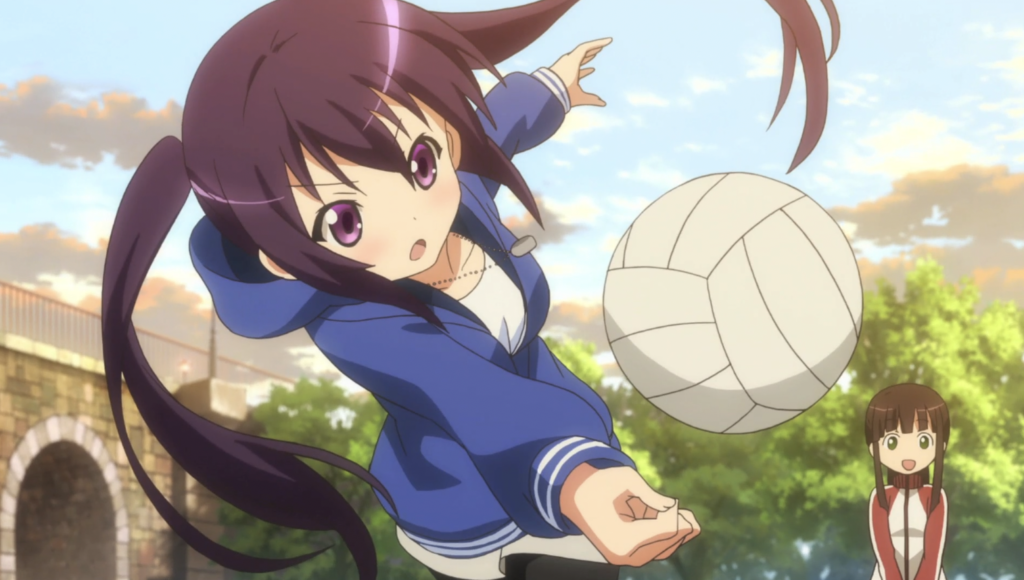 The fifth episode of this supercute slice-of-life series focuses on sports: specifically badminton and volleyball. You won’t learn anything about either sport, but it’s clever and funny.

Chino’s friend Maya is convinced that a shonen action pose will help them win at badminton (it doesn’t). The volleyball practice doesn’t go much better, as Chiya knocks out Cocoa with a perfect spike to the face. (Later on, Chiya learns that her true calling is dodgeball.)

Eventually, they get enough girls together for a practice volleyball match. It’s not exactly Haikyu!!, but Haikyu!! isn’t as cute as Is The Order A Rabbit? There’s a touch of romantic comedy as well, as half the girls seem determined to impress the other half.

You can watch the episode at Crunchyroll.

‘Such As It Was’ from Osomatsu-san 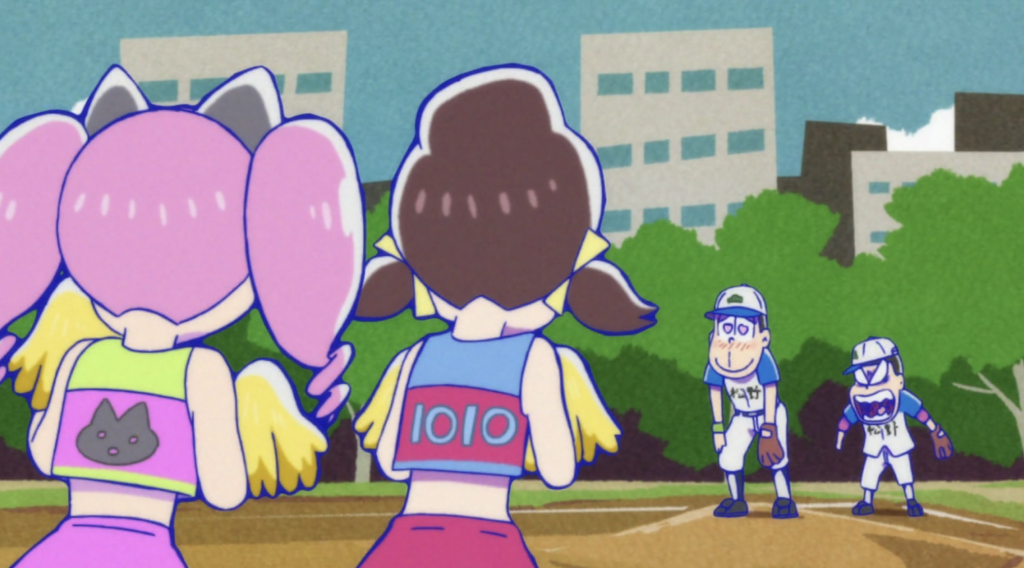 Throughout the entire farcical Osomatsu-san anime series, the hyperactive, happy, and weird (even by Osomatsu standards) Jyushimatsu is constantly obsessed with sports, especially baseball. He even creates a baseball-themed doujin for a sketch about Comiket.

However, in one episode, the Matsuno sextuplets take part in a baseball tournament. After a quick fake-out, the tournament turns out to be across the expressway from Koshien. Naturally, the episode consists mostly of silliness, sports anime parodies, and other fun gags. With Totoko and catgirl Nyaa providing cheerleader fanservice, the brothers make it to the final round. But they lose anyway, because that’s who they are.

The episode is at Crunchyroll.

‘Energetic Despite Not Being Myself’ from Lucky Star 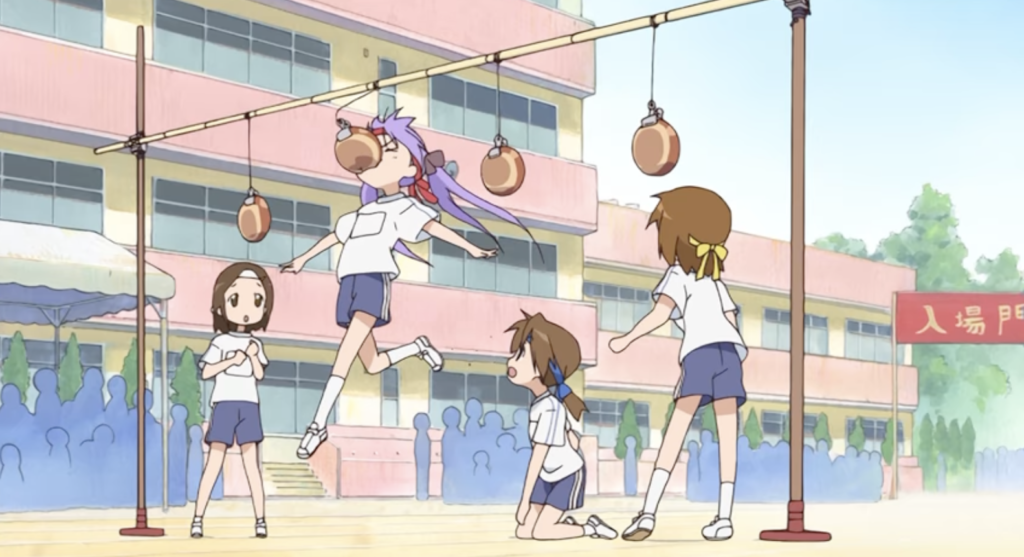 The eighth episode of Lucky Star features a school sports festival. This slice-of-life series is definitely on the cute side of the school anime sliding scale. And its sense of humor wanders all over the place.

But the episode does capture the awkwardness of school sports wonderfully. Tsukasa fails at jumping hurdles, despite all of her mental preparation. Konata’s father is the proud (but kind of creepy) camera dad. Kagami takes part in that one weird bread-eating race (which actually does happen sometimes in Japan).

The festival only takes about half of the episode, but it’s definitely worth watching.

The episode is at Funimation.