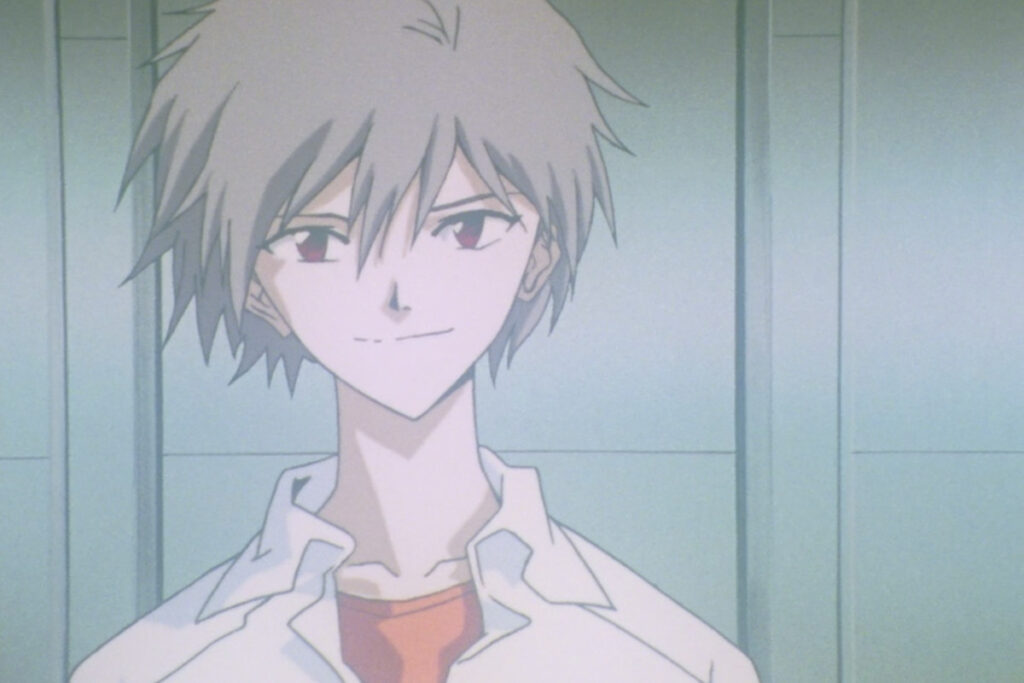 The twenty-fourth episode of the original Neon Genesis Evangelion series has continued to stir up conversation and discourse nearly a quarter century after release. While the series becomes more and more popular as the years go on, certain aspects of the fandom haven’t budged an inch; namely, the most popular characters. Asuka and Rei have their place in the halls of beloved anime heroines, while Shinji remains divisive, his nature either relatable or exasperating depending on who you ask. Kaworu Nagisa, however, has sat towards the upper echelon of the Evangelion cast since his red eyes first hit the screen.

In his primary episode (and his final one), Kaworu appears on screen for only about 8 minutes and 32 seconds. Despite this, he manages to place highly on polls decades later, ousting popular current characters with ease. It’s an incredible feat, and one which may stem not only from his interesting backstory, but from how he displays emotion in contrast to many other characters. The way he interacts with Shinji is singular and unique to the show and their brief meeting is something that audiences were parched for in the twenty-three episodes prior.

It Took an Angel to Show Some Humanity

Shinji’s journey is intense. In the first three minutes of episode one, he’s thrown headfirst into his new role of ‘savior,’ forced into a situation so far out of his control it’s laughable. His own detested father at the helm of his new life, his own worries and fears are pummeled into submission and tossed to the wayside, in favor of his growth and ability at the helm of Unit-01. He is a tool to be used, much more than he is a human boy.

Despite how we may feel about him throughout the series, the audience is thrust into his shoes. We, too, stand in a broken world, pulled into a strange reality with which we have zero familiarity. We want Shinji to learn and succeed, even if at times it seems impossible. We want him to overcome his anxiety and self-hatred, and we want him to step into a much stronger role. We want him to be loved.

Close to the final moments of the series, he’s thrown a lifeline… he’s thrown Kaworu Nagisa. 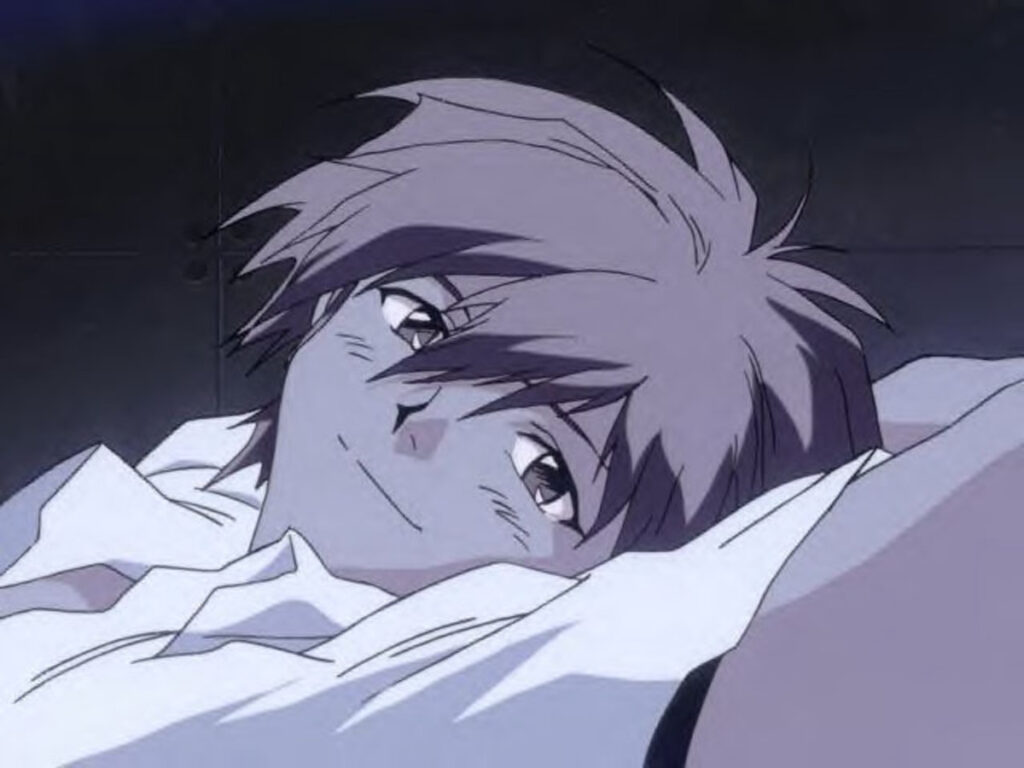 Though Misato showed an affinity for Shinji from the very beginning of the series, by episode twenty-four the two have grown apart, largely due to their distinct coping mechanisms. Asuka, despite showing some interest in him, displays her feelings unintuitively, constantly pulling Shinji and the audience through a rigmarole of muddled emotions. Rei is often unexpressive, only opening up a small bit as the children’s fight draws to a close. Indeed, at the beginning of this episode, Shinji utters the words ‘There’s nobody that I can call a friend now.’

Kaworu, in stark contrast to all other characters, instantly shows Shinji what he’s needed all along: a sense of unconditional love and acceptance, and a willingness to listen. There seems to be no strings attached, and despite his true identity as an Angel revealed later in the episode, his words carry no palpable or understandable threat. Despite the heavy meaning of ‘Angels’ in Evangelion, perhaps this is meant to conjure images in our heads of what an angel would be like in our own lore: soft-spoken, clad in white, radiating peace. Shinji doesn’t just grow fond of Kaworu; he clings to him instantly, as if starved of what the other boy offers.

What Kaworu does is so simple: he takes a genuine interest in Shinji’s thoughts and feelings given the bleak situation he finds himself in, yet his warmth seems so uncomfortably out of place in the series, letting us know how we, the audience, have also been starved of warmth. We only realize how lonely Shinji has truly been through these brief interactions with the Angel, who, by all rights, is a stranger. Without hesitation, he asks Shinji if he is afraid of intimacy, and we realize that this boy can see things in the protagonist which Shinji either can’t see, or more likely, could never admit. Kaworu acknowledges Shinji’s pain and seems truly about to comprehend it; the others at NERV scarcely seem to know Shinji at all, in comparison. Kaworu represents freedom, an ideal which he also mentions briefly throughout his short screen time. 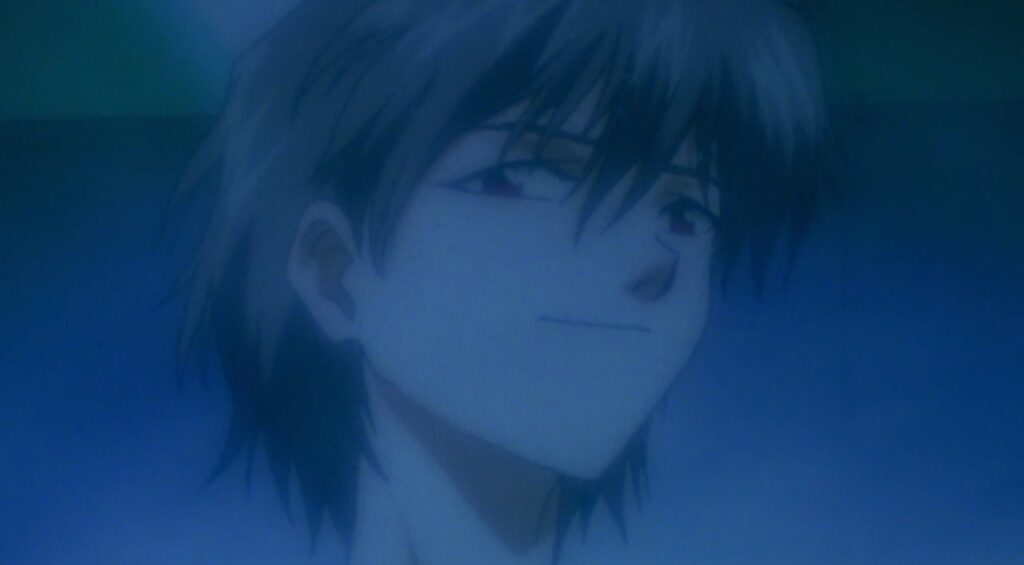 There are plenty of theories about Kaworu’s appearance in the show, with detractors calling him nothing but ‘yaoi fuel’ while others see him as a vital piece of the Evangelion puzzle. Truthfully, it’s hard to imagine Shinji being able to tap into his inner strength without this chance encounter. Kaworu knew just what to say; we just wish he could have stuck around a little longer.

Neon Genesis Evangelion is available to stream on Netflix.