’86 Eighty-Six’ Episode 1 Review: The Oppressor vs The Oppressed and a Challenge Against Militarism 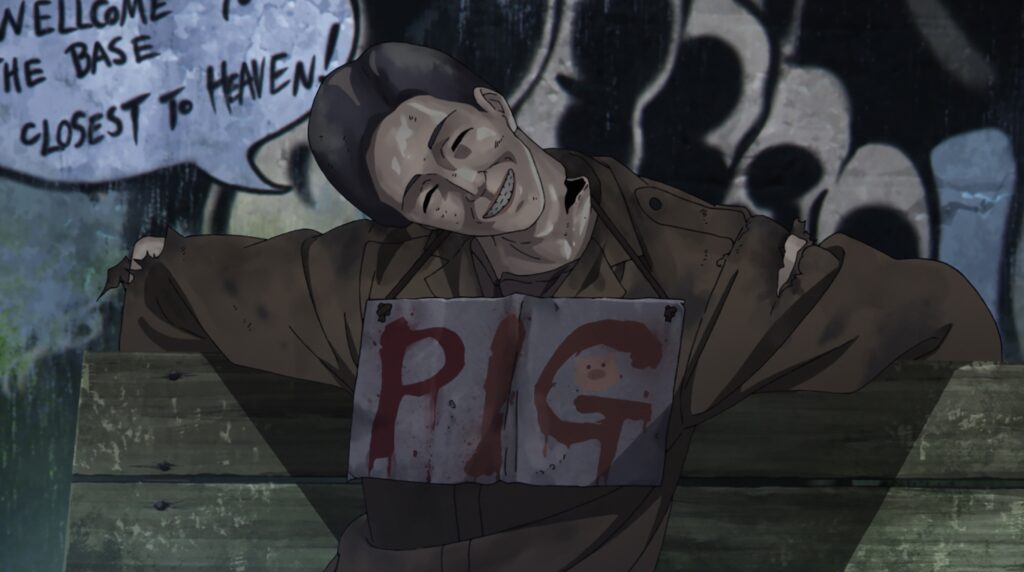 86 Eighty-Six episode 1 may just be scene-setting for the story to come, but that’s not necessarily an issue when the story, if familiar territory for the genre, is as interesting and well-executed as this.

It’s hard not to see this anime as one of the most unfortunately relevant anime airing during the Spring anime season.

A militarized force is institutionally designed to uphold the status quo at home and use its might to impose national values beyond its borders, with the purpose of protecting those in power from potential external influence from other countries or the lower classes. The purpose of a military force is to achieve the desires of the ruling class, using a so-called ‘righteous’ form of violence to implement an idea for the national direction that protects power through the sacrifice of the individual.

Regardless of if we class the military as solely referring to an international army or expand the definition to include militarized domestic forces like the police, the role of violence and its existence in conflict to equality and the dismantling of systemic inequality is an issue undergoing incredible international reckoning in recent years.

Whether we take a look at the Black Lives Matter movement and its attempts to dismantle systemic racism and the forces that uphold it, the protests against the Myanmar military coup that represent a struggle for non-military democracy, protests built on decades of imperial unrest and driven by Brexit in Northern Ireland, or the civil war in Yemen, militarism is an ideology that stands opposed to racial and social equality and brings harm to ordinary civilians and the oppressed who are left to deal with the consequences. 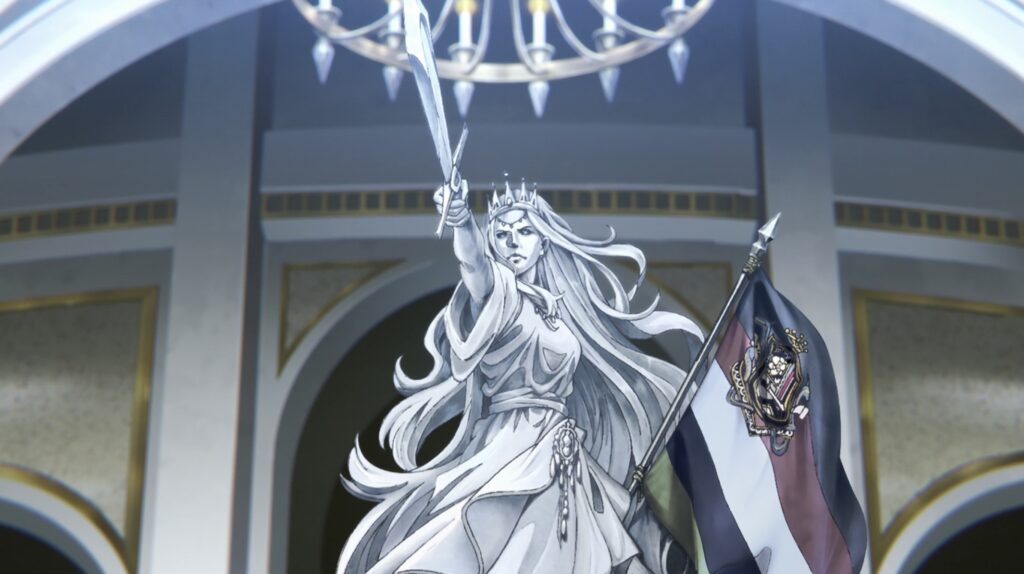 It’s these considerations that make the exploration of the relationship between military action and disguised ethnic cleansing in episode 1 of 86 Eighty-Six, handled with clear callbacks to European fascism masquerading under the imagery of French revolutionary figures, so engaging. In the series, The Republic of San Magnolia has been fighting against the Empire of Gaiden for several years, keeping the country on the side of the struggle through the use of automated Juggernauts that fight the war without human pilots, ensuring zero human casualties.

The issue is that there are human casualties. Only these casualties aren’t a concern to military leadership. While they keep the truth a secret from the general population, few seem to care about discarding a few sub-human pigs to the slaughter on the battlegrounds from the undisclosed 86th Ward of the Republic’s territory if it ensures military success. They can keep the systems of power and their white-haired, blue-eyed citizens safe while ethnically cleansing the undesirable races by throwing them into battle.

The military laughs and jokes about the sacrificed Eighty Sixers, as though their lives are nothing but pawns on a chessboard being strategically sacrificed, with the only person interested in their safety being a young major named Lena. Still, an unjust institution isn’t fixed by the actions of one person, and a kind voice directing these forces to slaughter is still a voice sending people to die in a war they won’t ever reap the rewards of. 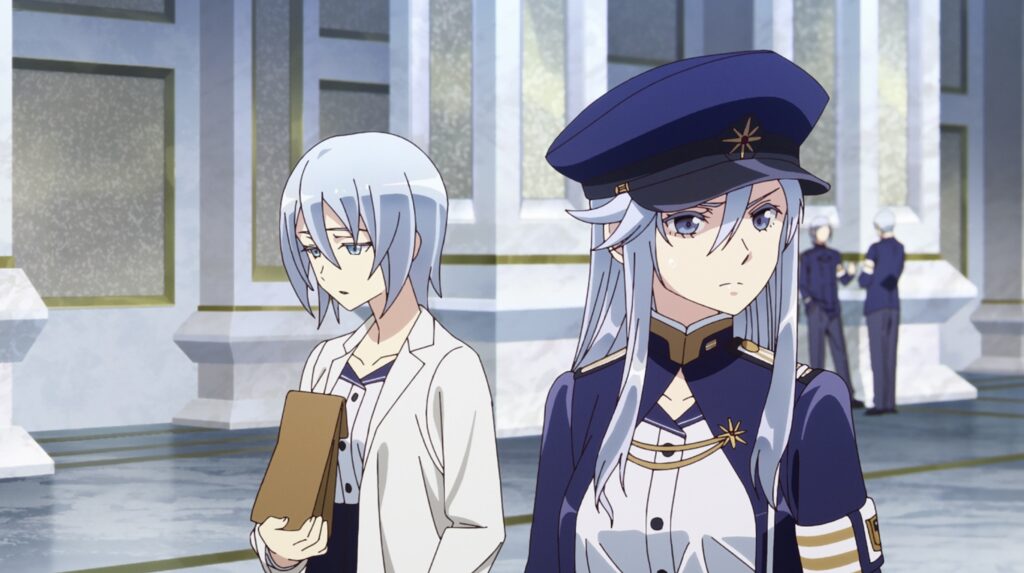 As 86 Eighty-Six episode 1 makes clear, this is a story about the clear racial conflict that exists in the role of the military, and the dehumanization, often of racial minorities in battle or as a target, that perpetuates the cycle of violence. Anti-war and anti-military anime are nothing new, with Gundam being an example of a franchise that has regularly tackled the misuse of military power that will once again be explored in the upcoming Gundam Hathaway films. Still, what impresses me with this series is how it goes about expressing these themes.

While there is an undeniable issue with the anime’s desire to invoke discussions of specifically racial tensions, while still portraying the oppressed force as mostly white (with one notable exception being killed off), the anime clearly identifies the co-opting of revolutionary narratives to serve the oppressor. The giant stone statues inspired by iconic French revolutionaries are no coincidence; they show how stories of working-class solidarity standing up to oppressors can later be weaponized to justify violence, by those same forces, against the very people who would have fought alongside them. 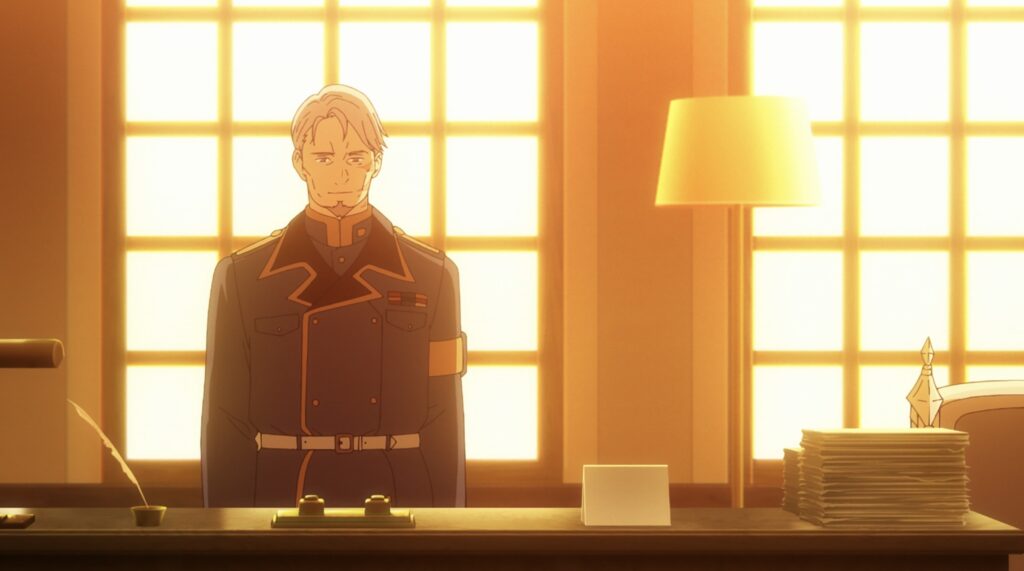 I also appreciate how we are drawn into the military propaganda with an idealized image of the nation that gets torn down as we enter Lena’s world and learn the truth of the dehumanization of the Eighty Sixers. The way the bright idealist city is tinged in darkness as we learn the truth is an effective visual representation of the Republic’s darker core. It’s a touch that speaks to a level of polish from A-1 Pictures, coupled with strong animation, that brings the series together.

Admittedly, this opening sequence would be more effective without the opening action sequence that somewhat gives the game away. 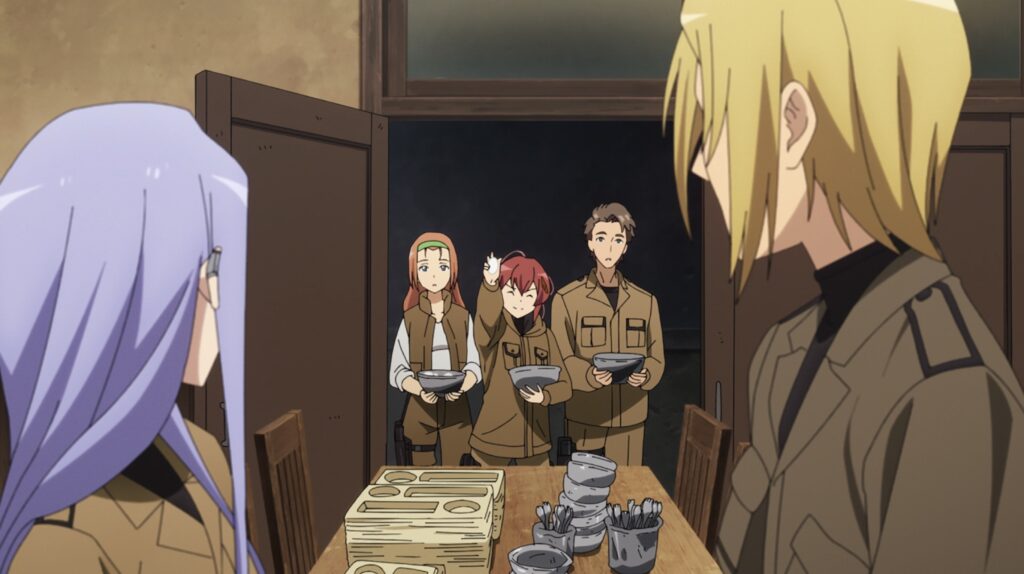 Having heard positive things about the original light novels, I have hope that the series can continue to deliver on these ideas. Even if it may be a little on the nose at times, it doesn’t stop 86 Eighty-Six episode 1 being any less effective or, more importantly, any less relevant.

86 Eighty-Six is currently streaming on Crunchyroll.