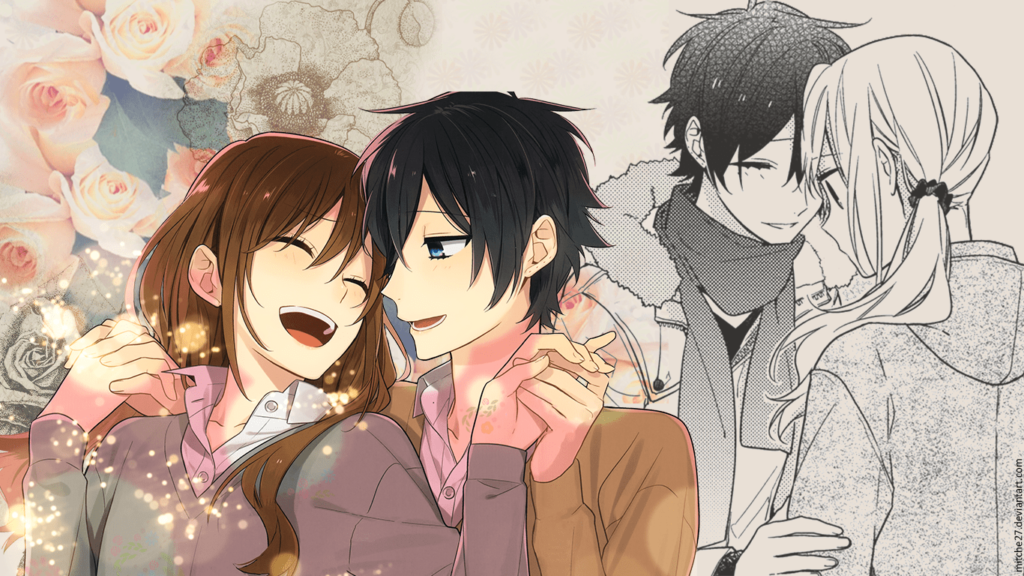 There are two very passionate camps when it comes to Valentine’s Day: some people adore the red bouquets and chocolate hearts lining the grocery store aisles and shopfronts, and some people prefer to lock themselves away to avoid the lovey-dovey public displays of affection.

It’s hard to let the 14th drift by without spending at least a little time in that smothering romantic headspace, at least in regards to the media we consume. Certain series or games have the uncanny ability to make us feel a twinge in our soul when we least expect it. Two people might come together in just the right way, or say just the right words, or do something so relatable, and then we stand in a fictional character’s shoes, if only for just a brief moment.

You may be single. You may be in a relationship. You may not know WHAT you are. But all of those things are irrelevant here: these are just those couples from our favorite anime, manga, and games that we always come back to when we want our heart to skip a beat. These are the romances that deserve a shoutout, the ones that melt our somewhat icy hearts. They might just do the same for you. 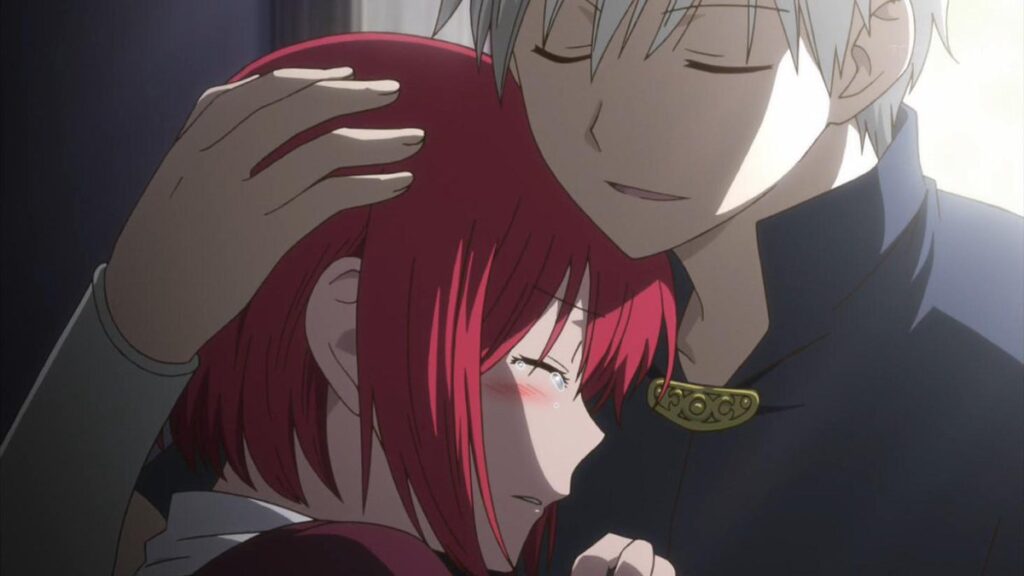 If more traditional love stories are your thing, we’d be remiss not to mention Sorata Akizuki’s fantasy work to start things off. Shirayuki is an independent girl, taught to hide her peculiar red hair when venturing to new places. When she is discovered by a narcissistic prince, she flees, meeting Zen, a royal who mistakenly eats a poisoned apple meant for Shirayuki. They become inseparable, and despite their very large social gap, their love can’t be stopped.

You can watch the anime series on Hulu and Funimation, and if you’d like your heart to skip a few more beats, the manga series can be picked up from VIZ! 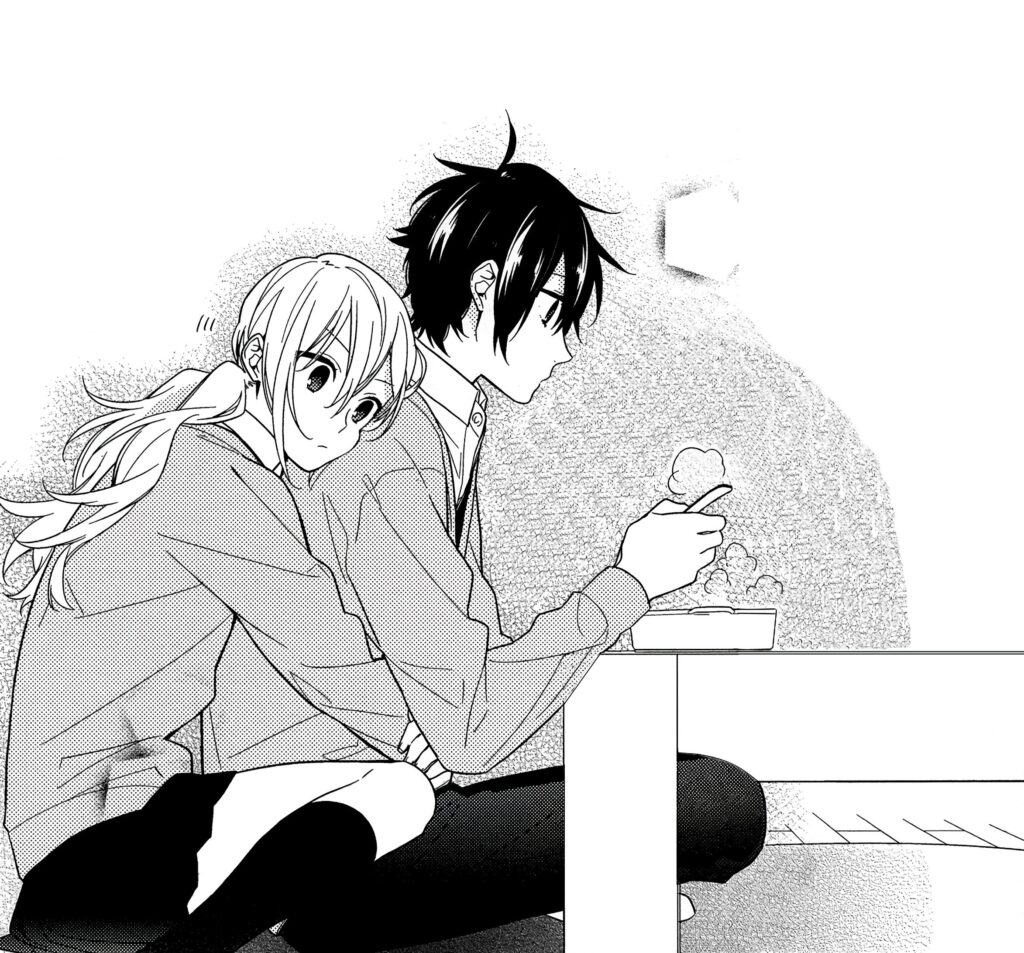 Authentic, relatable, honest: all words that instantly come to mind when thinking of Kyoko and Izumi’s budding relationship. Most of us have experience with wearing masks when around others, feeling that we can’t be our true selves out of fear of rejection or judgement. This is a story of unconditional love, and its beauty lies in the fact that only these two know each other’s secret selves. In each other, Kyoko and Izumi find a safe place for self-expression and honesty, while at school they must live up to society’s harsh expectations. We can all hope for a relationship as pure and simple.

This highly relatable and surprisingly deep love story is available to read through Yen Press, and of course, the anime adaptation is currently airing each week on Funimation and Hulu! 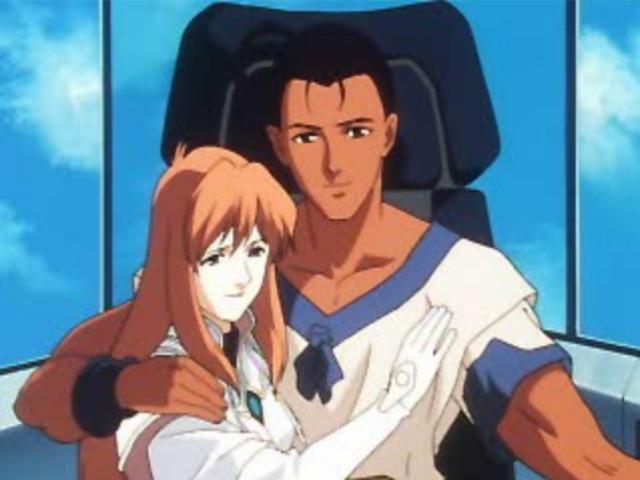 In retrospect, Xenogears feels ahead of its time. A game dealing with incredibly deep issues like war and prejudice, we couldn’t help but root for the pony-tailed amnesiac protagonist Fei as he searches for clues to his mysterious past. Meeting Elly, they traverse a dangerous world side by side, with Fei serving as a saving grace to the mysterious woman. (If you haven’t played it, I’m not inclined to give spoilers. But this relationship goes through some SERIOUS ups and downs.)

Every day, we pray that Xenogears will become more accessible to fans. Right now, your options are finding an original PSX copy, downloading the PS3 version, or grab the title for your Vita. Maybe news of a remake will come down the pipeline this year. (We can hope, right?) 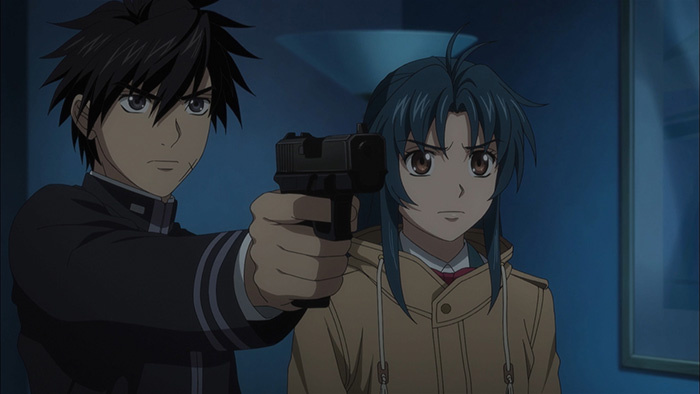 To my ladies reading: what is it about military guys that drive us crazy? In the case of Full Metal Panic, despite Sousuke initially coming off as a gun-nut with a complex, the way he protects Kaname is so instantly attractive. Though it starts out as a job for him, season after season we see him becoming more and more enamored with the blue-haired high schooler. Kaname doesn’t stand a chance either, not when such a handsome guy is risking life and limb for her.

Full Metal Panic! Is streaming on Hulu, Crunchyroll, and Funimation, and with multiple seasons and spin-offs to binge, you’ll fall down the Sousuke/Kaname relationship rabbit hole pretty quickly. We can’t help loving a protective military man. 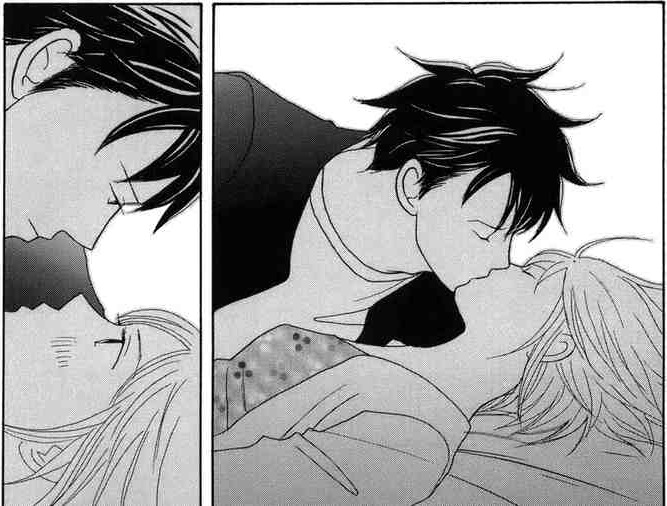 Music is a key to passion. Something about the jingle of piano keys or the pounding of drums can bring something out of us, and Nodame Cantabile is a testament to this. Shinichi is an arrogant perfectionist who dreams of performing his violin abroad, but who is trapped in Japan because of his fear of flying. Megumi is a free-spirited pianist who prefers to play by ear, rather than read sheet music. As they become closer, they make each other better people. Isn’t that what a relationship should be about?

Turn on some classical music and start reading Tomoko Ninomiya’s award-winning manga series, available from Kodansha Comics. (We also hope that the live-action drama makes its way back to Crunchyroll at some point, because it’s a treasure.) 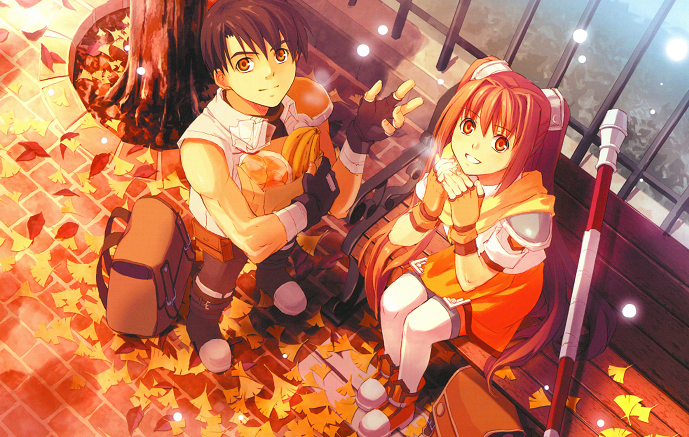 This may be the most controversial pairing on the list, but to be clear: Estelle and Joshua are not brother and sister, and are more like childhood friends. Playing the game will have you rooting for Joshua, who constantly pines for a painfully oblivious Estelle. That’s how love is sometimes, though, right? Sometimes, we can’t see it, even if it’s right in front of our face.

As mentioned in our must-play classic JRPG piece, Trails in the Sky is on Steam and GOG. While this romance does stir up controversy, we’d recommend playing the game before making your ultimate decision. You’ll be surprised. 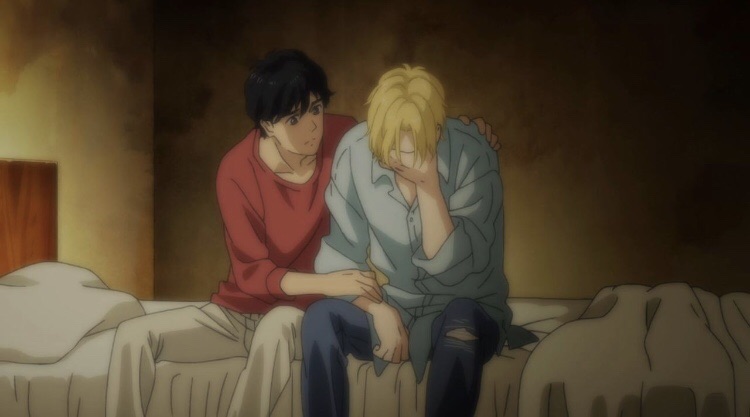 Banana Fish is rough. The manga is a masterpiece, and the recent MAPPA anime series is award-winning, and for good reason. But the relationship between Eiji and Ash is unconventional: it isn’t cut and dry like the others on this list. Ash suffers deeply from the unspeakable trauma he’s experienced in his life, while Eiji wants nothing more than to be a comforting presence to the New York youth. In a side story, the author Akimi Yoshida wrote that while they didn’t have a physical relationship, they were connected, ‘soul to soul.’

The most emotionally harrowing anime series I’ve ever seen is available on Amazon Prime Video, but be warned: it deals with very heavy subjects and isn’t always an easy watch. It’s impossible to not be impacted by Ash’s plight, and to not fall in love with Eiji’s pure and unconditional love. 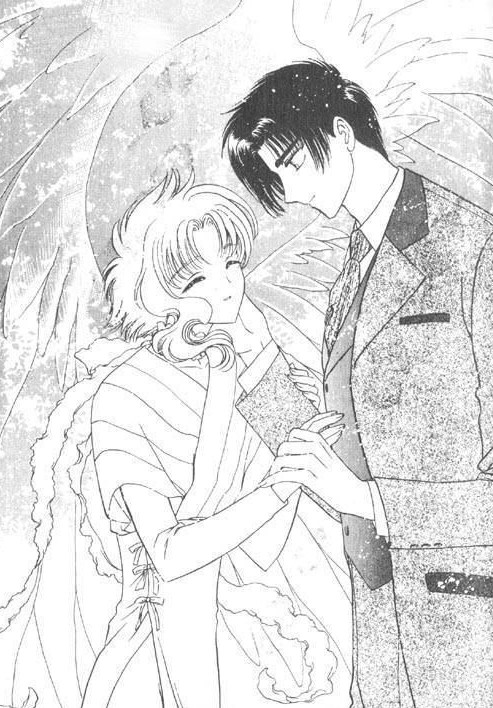 Don’t worry: WISH is a CLAMP work that was actually completed. Despite only running for four volumes, this is the fantasy romance of our dreams: an angel falls for a human, choosing to disobey God in order to be with him in this life and all lives after. For a story you can binge in one sitting, it’s got what you need: emotion, comedy, and characters you’ll never want to let go.

Pick up the Omnibus edition containing all four volumes from Dark Horse or on Amazon. It’s a quick read and the perfect fantasy love story to escape from these weird 2021 vibes. 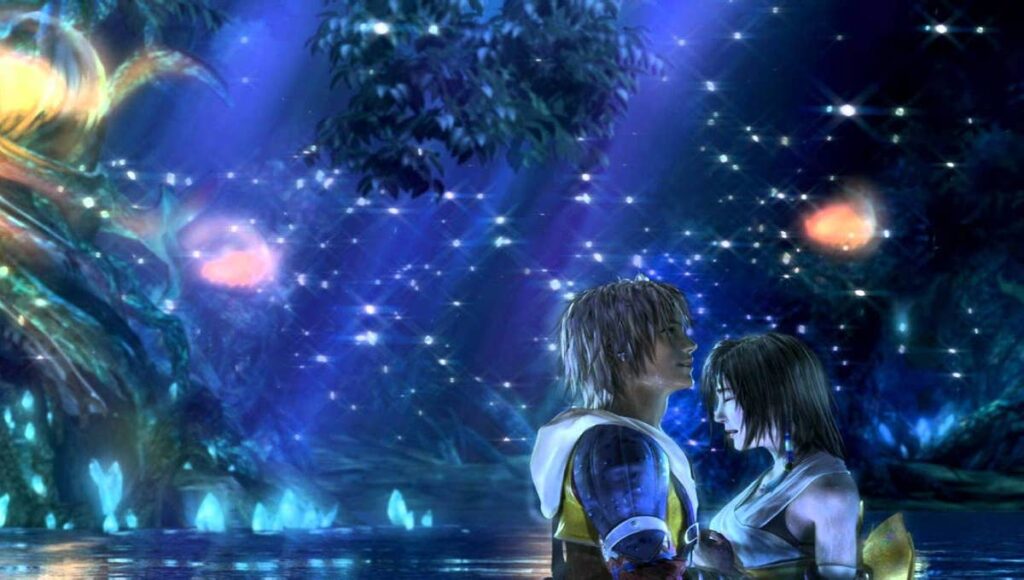 Truthfully, plenty of Final Fantasy titles could fit perfectly on this list. Having to choose one wasn’t easy, but Tidus and Yuna’s journey (both literally and figuratively) seems to have a lasting effect on fans of the franchise more than any other pairing. Is it the heartache Tidus feels as he watches Yuna constantly sacrifice herself for others? Is it the strange world he finds himself in, and the comfort she provides? Does Yuna see in Tidus the freedom she wishes she could have for herself? Whatever it is, it keeps us coming back.

The best way to experience Final Fantasy X is to pick up the X/X-2 Remaster for Playstation 3, Playstation 4, Switch or even PC. It’s never been easier to get your hands on this legendary title. Just have plenty of tissues handy; crying isn’t optional.

Is your heart about to burst? Are you suddenly looking more forward to the 14th, the perfect day to binge one (or more) of these epic love stories? Did we miss your favorite Japanese pop culture couple? Do you want to sing our praises? Head over to our Facebook, Twitter, and Instagram pages and let us know your thoughts. We’re also always available to chat on our Discord!

No matter what your Valentine’s Day plans are, we sincerely hope it’s a happy day. Sending tons of love from the OTAQUEST team.