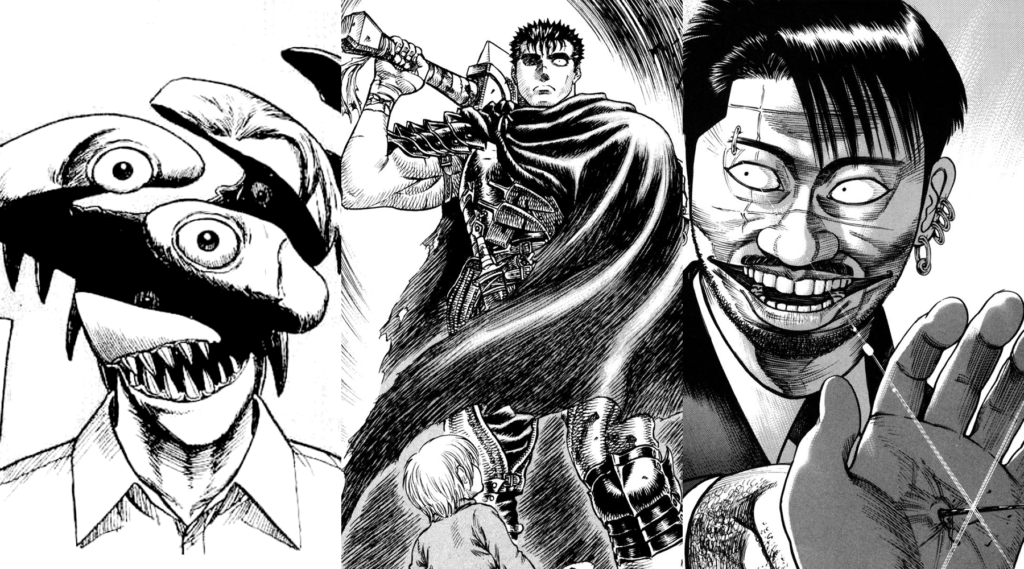 Certainly, with Shonen Jump being the best-selling manga magazine for decades, audiences’ thirst for brolic men and swordsmen bashing, clashing, and thrashing endures well into adulthood. Not that there’s anything wrong with devoting yourself to comics made for a younger audience (OTAQUEST’s prolific manga writer Jacob sure does in his Jump Time series), but some who’ve gotten bored with Boy Heroes may be itching for something more intellectual in theory, and cut-throat in execution.

The seinen demographic is full of dark and edgy titles that contain brutal violence, but there are many shonen titles that also fit the description. If you are looking for something with more mature themes, make the leap with these 9 mature action manga.

God, there’s a whole lot of Baki: five separate manga and three anime adaptations, in fact, and thanks to both Netflix and Comixology, some of it is now available in English. It is considered a shonen manga, serialized in Weekly Shonen Champion, but you would be forgiven for thinking that its brutal violence is more suited for the pages of a seinen magazine.

The martial arts manga to end all martial arts manga, the grotesque over-inflated muscles and extreme violence might lead you to believe that the 100+ volumes of this shonen manga across its different iterations might be all spectacle. Spectacle it does provide, but the more you delve into Baki Hanma’s bone-crunching world, the more author Keisuke Itagaki’s poeticism makes itself available to the reader.

You’ve either already read Berserk or you’ve been putting it off for over a decade. The objective pinnacle of seinen manga, if not all manga, Kentaro Miura’s never-ending tale of an enduring mercenary hellbent on revenge in an equally fantastical and nightmarish medieval world has long been celebrated as one of the most significant works of art on this planet.

Miura’s ghoulish concepts and grand storytelling are masterfully explored through flawless, ink-heavy illustrations you’ll hardly believe could even be printed on a page.

While Fujimoto’s found extreme success with his Chainsaw Man sensation, his debut shouldn’t be ignored. A man constantly on fire who feeds people with his regenerating limbs as he wanders around a post-apocalyptic frozen world, occasionally throwing down with other weirdos along the way, makes for a great comic.

We’ve talked a lot about Gantz on OTAQUEST recently, from highlighting its author Hiroya Oku to speculating on its supposedly-in-development Hollywood adaptation. The reason we can’t stop bringing up this series that’s already faded from the limelight is because, ultimately, nothing else like it exists.

Gantz portends ultraviolence and over-sexualization on the surface, but beneath its pages, via an art style striving for a sense of the real, you will find bold meditations on the nihilism rampant in society.

Forgive me for putting Parasyte on the cover, but I like to play a bit with expectations. If you are reading a list, do not expect things. My advice to you. But it was not a complete misdirection, because I’ve opted to include Historie by the same author instead.

While Hitoshi Iwaaki’s genius fusion of body horror and street fighting remains classic, he took everything he learned about making manga in Parasyte to create his follow up, Historie. Centering around Eumenes, assistant of Alexander the Great, this rare manga take on ancient Greco warfare could be called the most sophisticated of seinen manga. Iwaaki approaches his artistic depiction with a strong, intentional sense of geometry that builds into these incredible comic composition crescendos.

The basis for Takashi Miike’s seminal Ichi the Killer, Hideo Yamamoto’s original Koroshiya Ichi’s also a forced to be reckoned with: a manga about a crybaby assassin opposite a Yakuza member who makes Majima look like a Togapi.

We might not call this one better than its film adaptation (though we would certainly say Yamato’s Homunculus is better than its recent Netflixization), but it’s still one of the more interesting and eerie action-infused seinen manga out there.

What happens when you suddenly start having to literally eat people to survive in an otherwise normal society? Say, if you befriend a group of people who’ve always had to do so?

Tokyo Ghoul had a certain reputation gained from its original 15 minutes of fame, but look at both manga in their totality and it’s clear that author Sui Ishida succeeded at telling an intricate, grey scale story with ambitious artistic presentation and a narrative that doesn’t spoonfeed the reader its morals and conclusions.

Vagabond remains a giant not just amongst seinen manga but the medium as a whole. Created by Slam Dunk’s Takehiko Inoue, this esoteric and thoughtful reimagining of famed Miyamoto Musashi’s life gets recommended often, being one of the most obvious examples of manga’s dearth.

As beautiful as the Mona Lisa and as dense as a history book, with all the classical action of your favorite Kurosawa film, not much more about Vagabond can be said that hasn’t by its 82 million copies sold.

WIT Studio‘s beautiful adaptation of Makoto Yukimura’s Vinland Saga, a brutal tale of Viking savagery, may have caught your attention, but with the manga having sailed much further into unexplored territory, going ahead and switching over wouldn’t be a bad call. The manga has been aimed at both demographics, as it was first serialized in Weekly Shonen Magazine before moving to the seinen Monthly Afternoon, aimed at young adult men.

Besides, as good as the animation was, Yukimura’s a technical genius at his comic craft. The detailed illustration and historical accuracy of Vinland Saga, with all the heart the author showed in his previous cult classic Planetes, propels it to seinen manga excellence.