One of the mainstays of Japanese animation, the mecha genre, has remained popular since the late 50s, hitting a comfortable stride in the 70s and 80s. These were the decades which brought us Mazinger Z, Mobile Suit Gundam, Macross, and Gunbuster. Mecha is a genre perfect for merchandise tie-ins and the scale model obsessed, its popularity is guaranteed to stick with us for the long haul. Things changed, however, in the 90s.

While the decade introduced many popular series, it was clear that a shift in substance had taken place: no longer were these series solely focused on war alone, but on the humans behind the robots. We start to see more personal stories, more emotion, and less formulaic construction. Gone are the days of a simple ‘monster of the week’ formula. And that’s what made 90s mecha so memorable. That, and Toonami.

Evangelion is a masterpiece, and it’s easy for it to outshine anything in its way. But these are nine series not to be missed, even if giant robots aren’t exactly your thing.

All aboard the nostalgia train! 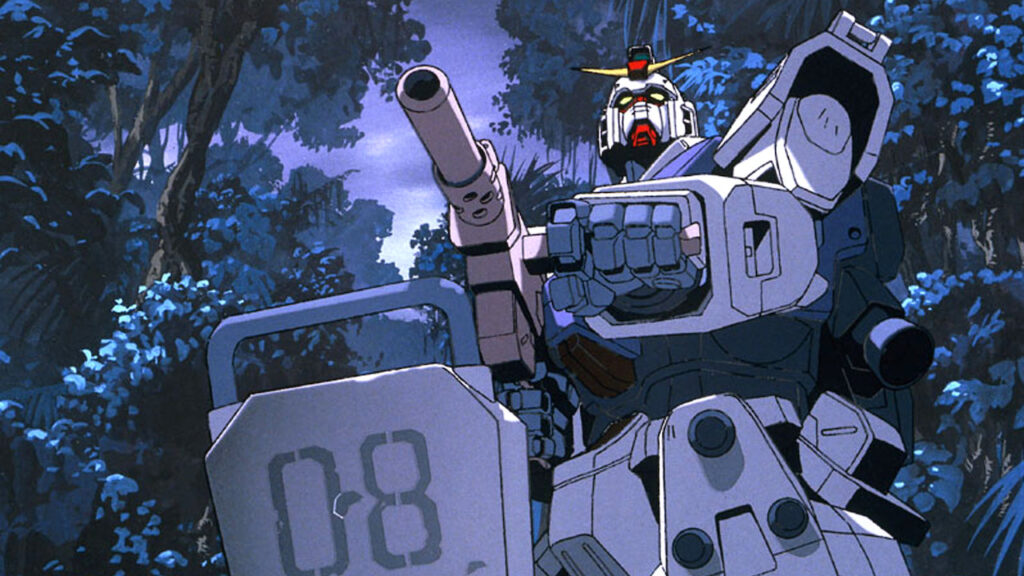 Yes, you’ll see a few Gundam series on this list: it’s inevitable. Gundam 08TH MS Team is a 12-episode OVA series perfect for newcomers to the Gundam universe, not overcomplicated and not depending on the twenty years of lore to come prior.

It tells the story of Shiro and Aina, two soldiers on opposite sides of a massive war, with the former beginning to question his motivation for fighting. Why not run off and marry the enemy instead? This is a perfect example of the 90s mecha shift: the complex characters drive the show forward, not the robots themselves. (There are robots with laser swords too, if that’s important to you. Don’t worry.)

Luckily, Gundam 08 MS Team is available to stream on Hulu. For the physical media types out there, the complete Blu-ray collection is available on Amazon. 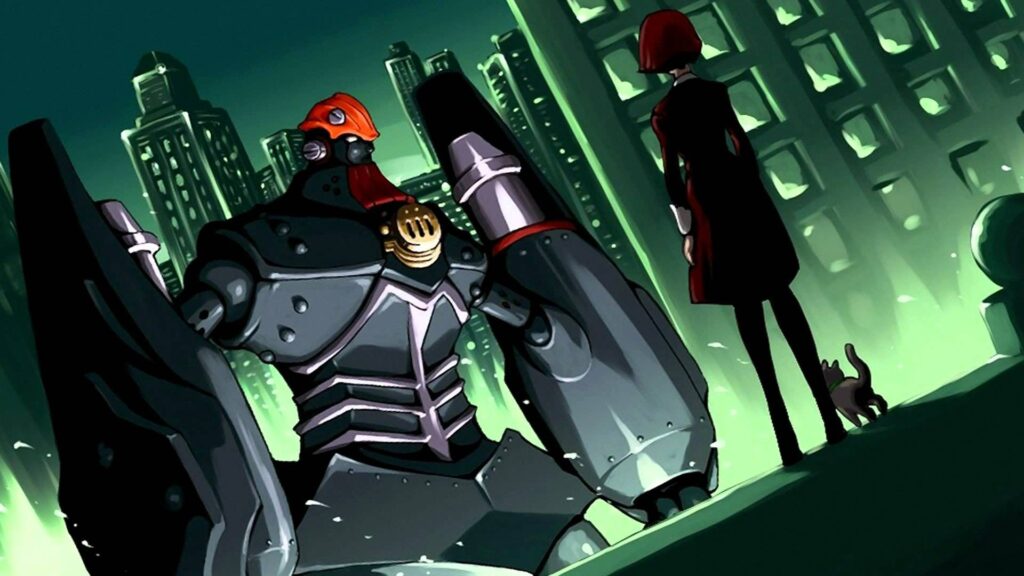 The Big O was a curious creation. With serious Batman vibes, its original release in 1999 was set to bring 26 episodes to the table, but viewership in Japan was so low, that number was cut in half. It was the massively positive reaction from international viewers which led to the final 13 episodes being aired years later.

Set in a bizarre city-state and following Roger Smith and his android Dorothy, the series brings unique elements of tech-noir and detective fiction to the mecha genre, making it one of the more memorable series from the decade, for better or worse. Fun fact: the head writer, Chiaki J. Konaka, also wrote the Serial Experiments Lain series.

For those ready to relive their Toonami days, The Big O is currently streaming on HIDIVE, while a swanky Blu-ray release is decently priced on Amazon.

3. The King of Braves GaoGaiGar 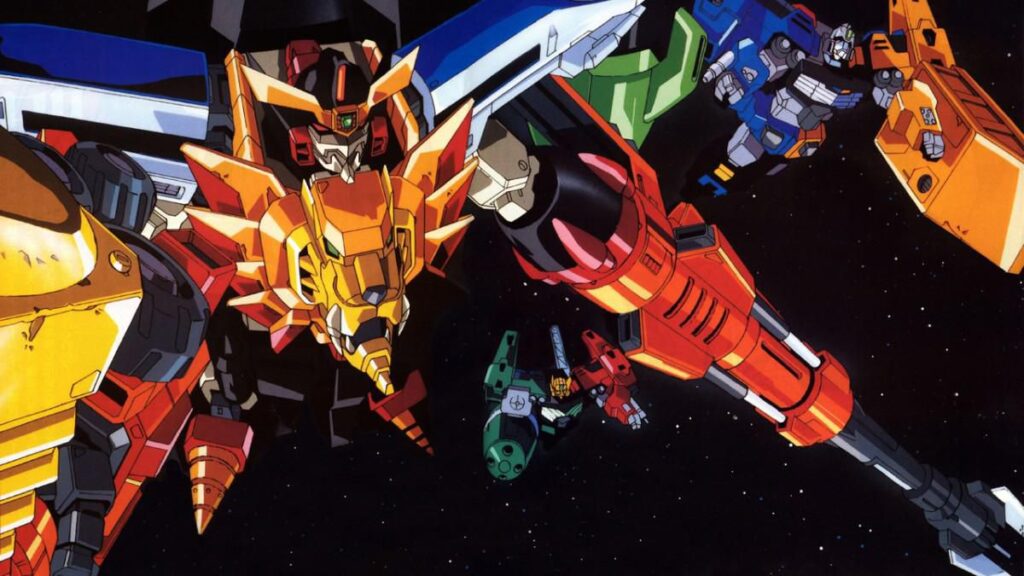 Cyborgs? Expected. Aliens? Been there, done that. A giant robot lion? You have our attention. GaoGaiGar didn’t only have a great theme song: it was a giant boiling pot of every genre you could think of, conceptualized by the people who brought you Transformers. Robots transform, they merge with other robots, they battle evil alien robot monsters, and the main robot is an artistic blend of a lion, bullet train, and stealth bomber. It’s a mess, and that’s what makes it fun to watch. GaoGaiGar served as an inspiration for many mecha series to come, and the horror series Betterman even takes place in the same universe!

Regrettably, GaoGaiGar isn’t currently streaming anywhere, though we’re hoping someone will change that ASAP. The series is still generating plenty of buzz, and we can’t see it being utterly lost to time. Let’s get some buzz going on Twitter! 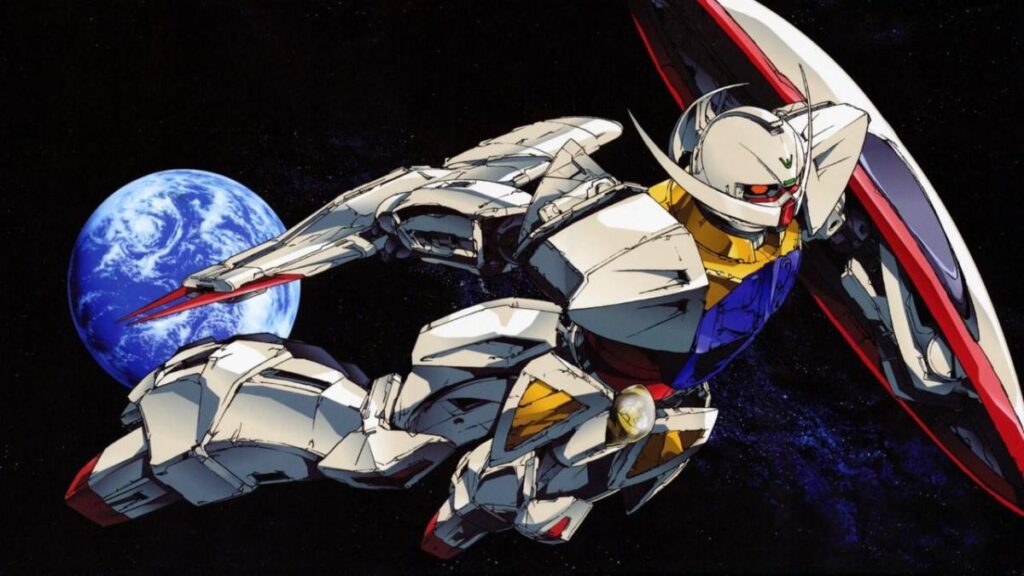 Along with the previously mentioned Gundam 08TH MS Team, Turn A Gundam is another newbie-friendly series in the franchise’s massive canon. One of only a couple series in the Gundam universe to be specifically classified as a romance, it caters to a slightly different audience than most.

It’s protagonist, Loran Cehack, is also a peculiar protagonist. He is a pacifist only willing to fight when absolutely necessary, and he doesn’t exactly fit the profile of a mecha hero. We love that.

While Turn A Gundam currently isn’t available to stream, the utterly gorgeous Blu-ray collection is available on Amazon, thanks to our friends at Right Stuf. 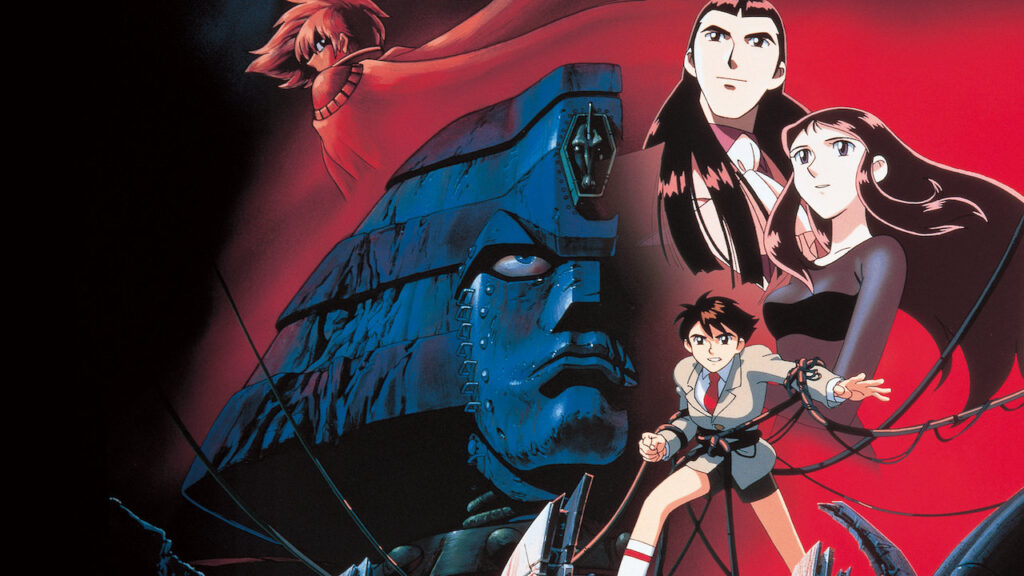 A manga series from the late 1960s, Giant Robo did inspire a 2007 anime series, but the seven-episode OVA series The Day the Earth Stood Still is the adaptation that really stood out.

Still recognized today for it’s powerful score and retro-futuristic setting, it tells a bleak story of an entire society being demolished in a single week, all because of reliance on one energy source. The series also manages to seamlessly blend in homages to Hong Kong cinema, and was directed by Yasuhiro Imagawa of Aura Battler Dunbine, Berserk, and Zeta Gundam fame.

Though we’re looking forward to a streaming option soon, Discotek Media’s 2019 Blu-ray release can be picked up on Amazon! 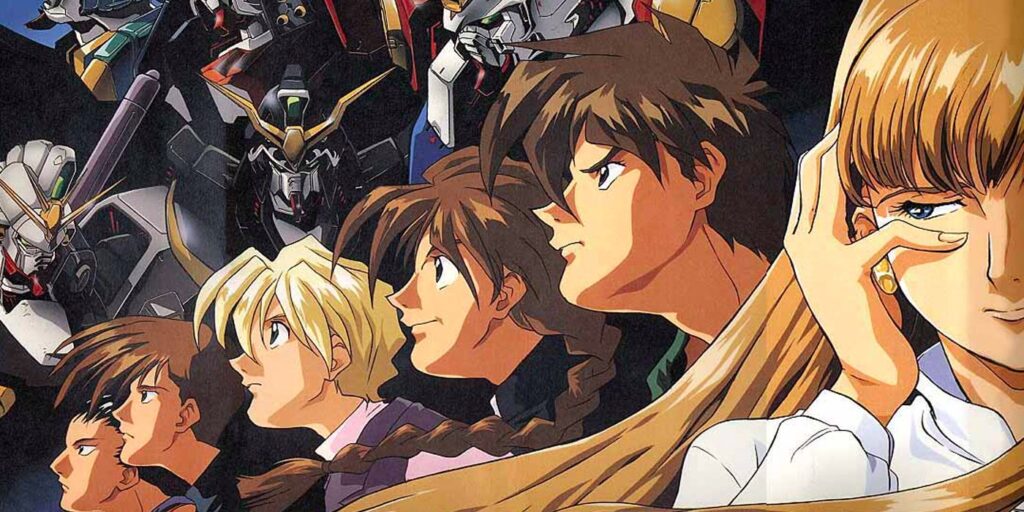 Initially, Gundam Wing wasn’t too popular in Japan, but it absolutely killed in North America. Why? Was it the handsome (and extremely shippable) dudes? The infamously catchy Two-Mix openings? Were those sleek Toonami promos voiced by Peter Cullen (Optimus Prime) enough to suck people in?

We’d like to think it’s all of the above, mixed with a story that continues to hold up, even in 2021. While not the first Gundam series to be dubbed and released in the United States, it was the first to be aired on American TV, making it a big piece of western anime history.

Grab some snacks, plop down on the couch, and pretend that your homework is all done for that perfect nostalgia feel: Gundam Wing is available to stream on Hulu and Crunchyroll, and yes, Endless Waltz is available on the latter as well. Let us know, what pilot is your favorite?

7. The Vision of Escaflowne 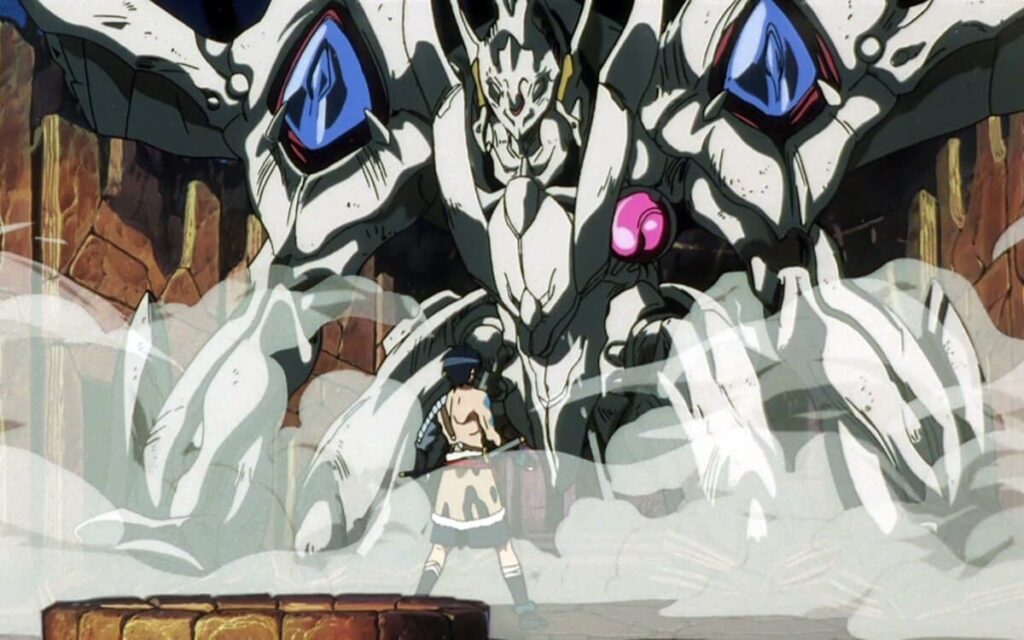 It’s no secret that the OTAQUEST staff is a tad obsessed with Escaflowne. It’s also no secret that this is one of the more peculiar choices on the list. The fantasy elements and shoujo aesthetic in the series can sometimes outshine the giant robot, in a bizarre clash of genres not often seen working together in such perfect harmony.

The story can attract fans of all kinds: high-schooler Hitomi is transported to another world alongside a magical King named Van, the latter using his mech Escaflowne to stop an evil empire. Beyond being another mecha series, it’s more of an epic fantasy, with many critics deeming it as the best anime of the 90s. Really.

Binge the entire series on Funimation, along with the movie: it’s also a must-see. 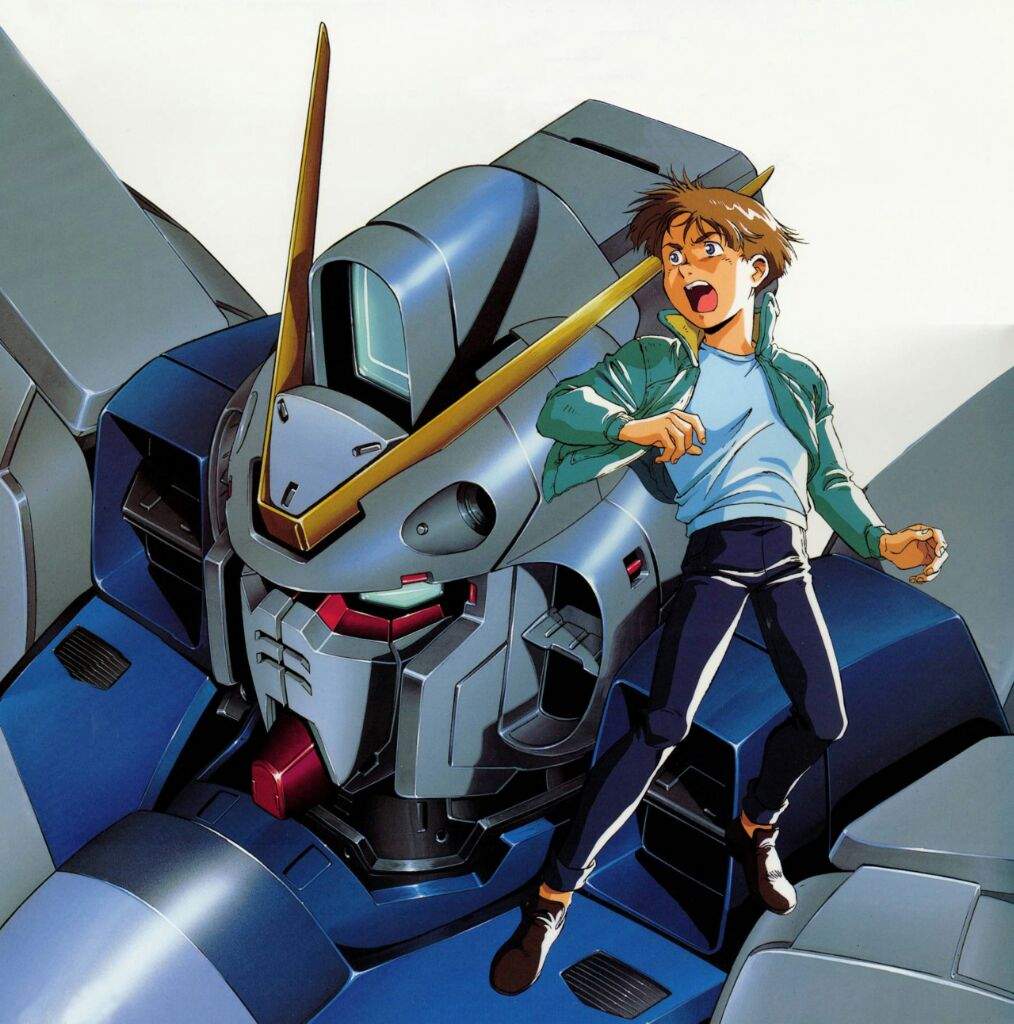 Victory Gundam (or V Gundam) is criminally underrated. Directed by original Gundam creator Yoshiyuki Tomino and released in 1993, it was the first in the franchise to be set in the current (for the time) Heisei period, giving it an odd feeling of familiarity. It also features the youngest protagonist in the franchise, 13-year-old Üso.

This helped it attract a younger audience, but don’t let that fool you: V Gundam doesn’t sugar coat, featuring the same wartime drama and mature themes you’ve come to expect. The Earth is under attack, and Üso, living quietly in Eastern Europe, is thrown into the conflict. Yes, he grows up way too fast. And that’s part of what makes the series so memorable.

It’s a sin that Üso’s adventure isn’t streaming anywhere, but Amazon has you covered with the entire series packaged into two Blu-ray sets. 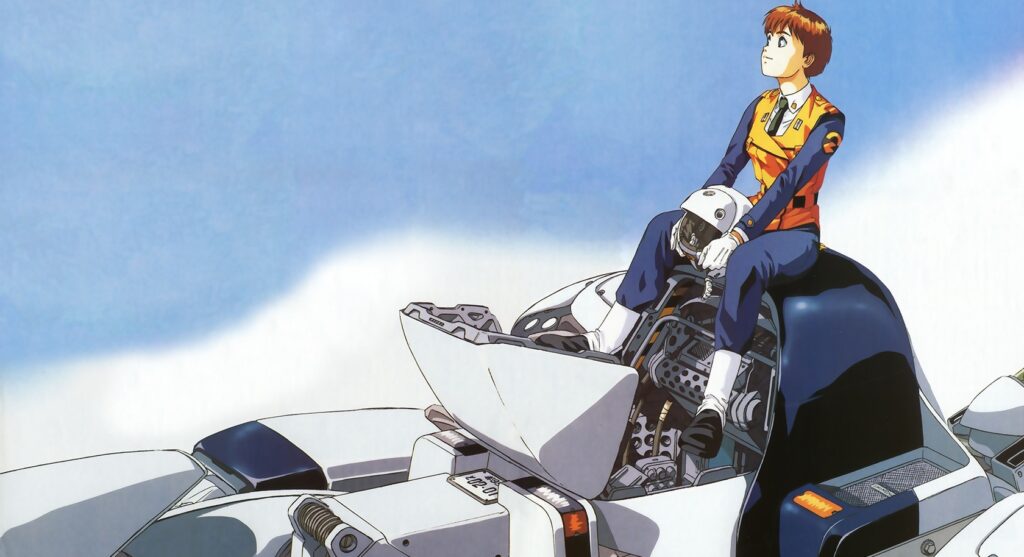 Patlabor is a bit of a mess (though, we have a guide to get you up to speed.) Don’t worry: we’re only talking about the original TV series. And before anyone points it out… yes, the TV series technically started airing in October 1989, but since the bulk of it is certified 90s goodness, it couldn’t be left off the list.

An alternate timeline to the 7 original OVAs, it’s the perfect series for someone wanting to turn their brain off and relax: police mechs going after bad guys. The franchise maintains a cult following in the west, as it should.

All 47 episodes of the mecha thriller and the original OVAs are currently available to stream on HIDIVE. 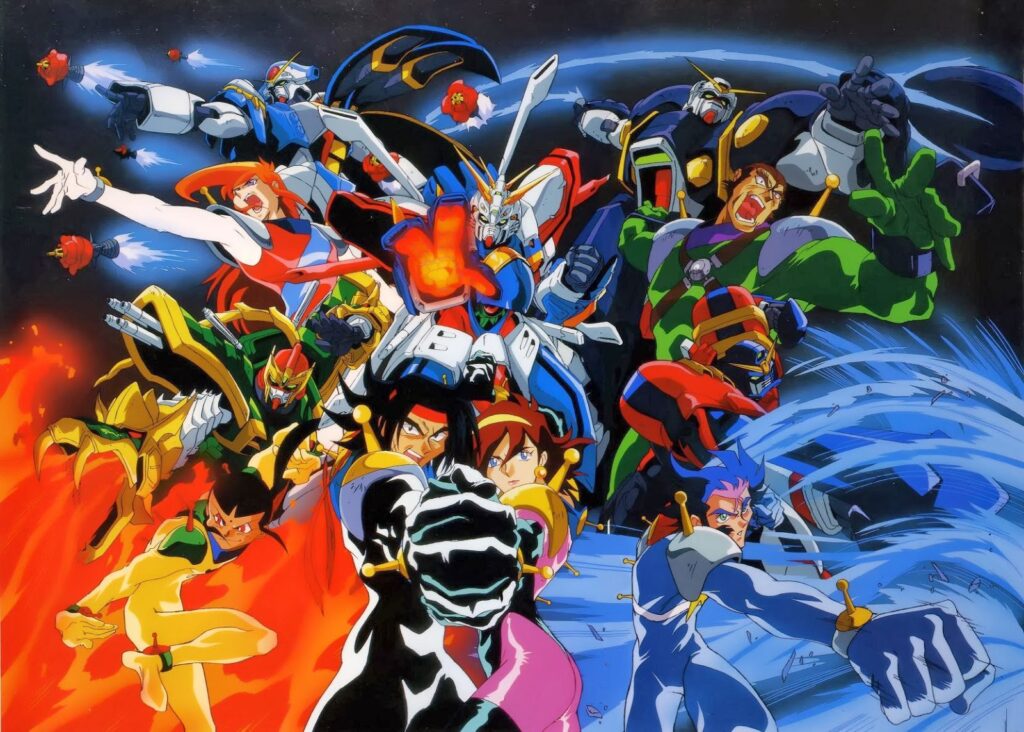 My conscience wouldn’t let me leave G Gundam off of a 90s mecha list, even if reviews maintain consistently split. It has a unique tone in the franchise, leaving behind the drama and militaristic settings in favor of more dynamic and campy characters. No more space battles: G Gundam gives us tournament-style martial arts matches instead. To describe the series in one word, ‘odd’ would be a good choice. It’s a matter of personal taste, but G Gundam is worth a watch. (It’s actually perfect for non-mecha fans.)

The entire series is on Crunchyroll now. Go. No excuses. Even if you hated it in middle school, maybe it aged like a fine wine. Maybe.

Whether you’re looking to come for me for calling Evangelion a mecha series, or you want to let our community know about a 90s Mecha series we left out, join us over on our Discord!

The best thing about OTAQUEST? We’ve got something for every type of fan. Welcome!