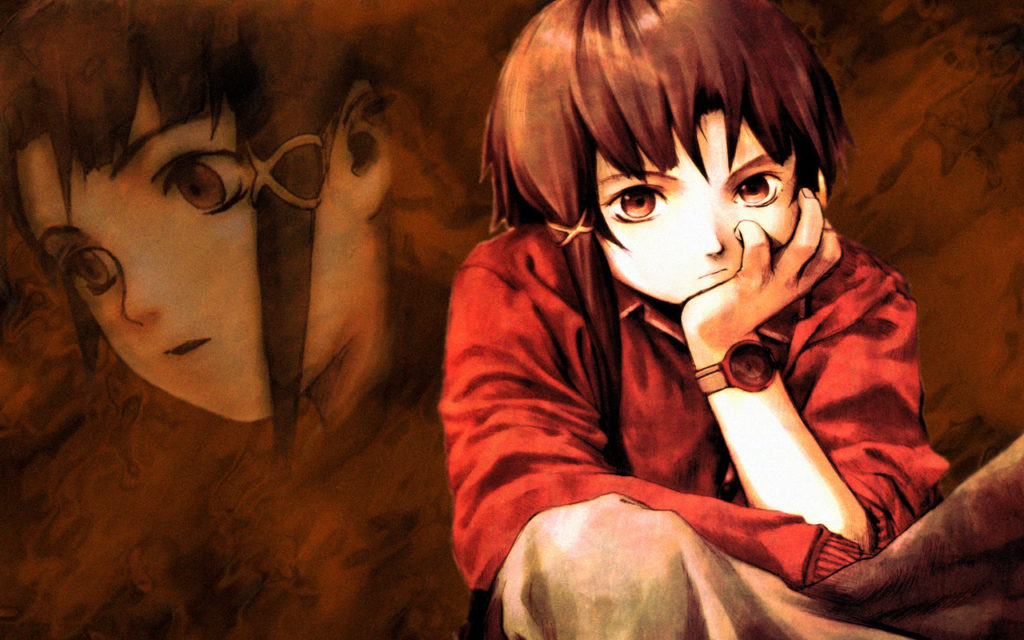 If you’ve come here to look up information on the cult classic Serial Experiments Lain, we salute you. Everyone on the OTAQUEST team adores this 1998 anime gem that largely predicted just how intertwined the internet would become in our daily lives. It is one of the last few shows to come out of the 90s experimental period in anime (no pun intended) and we think it’s absolutely required watching for anyone that has an invested interest in going through all the classics.

It’s no wonder Serial Experiments Lain was such a success when it was the meeting of several icons at exactly the right time. Maybe most notably is the involvement of illustrator Yoshitoshi ABe, who later went on to create the also quite good Haibane Renmei, whose striking character designs and illustration work are unmistakable.

You had Chiaki J. Konaka screenwriting this one, making it siblings to other out there works like The Big O and Digimon Tamers. Finally, the late director Ryutaro Nakamura put the show together, who also manned the original Kino’s Journey. With three all-time greats, the show was destined for greatness. 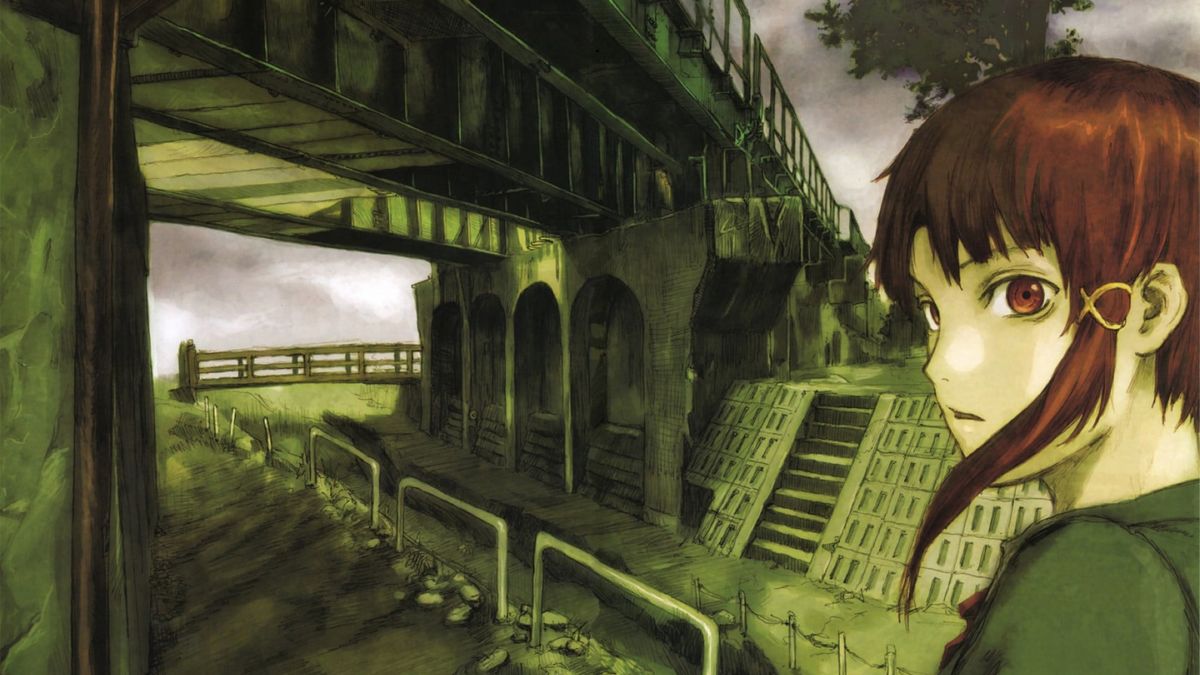 A Masterwork From Episode 1

From the very first episode of Serial Experiments Lain, you know you’re watching something completely unique.

Every single component of the show is bringing something strong to the table: from how inhabitants of the anime like the titular Lain Iwakura and her best friend Alice Mizuki ooze visual style to the show’s bleak everyday surroundings, the at-the-time groundbreaking subject about the internet’s assimilation with society, and the expert direction that brings all these elements together.

From the desolate shots of hanging wires in suburban Japan to the visual depictions of the early internet, if you’re broadly into ‘aesthetics’ you won’t be able to take your eyes off this show. Thankfully, the story has plenty to offer on its own too.

To get into Episode 1 more specifically, the entire show starts off with a high school girl flinging herself off a building. A week later, her classmates start receiving emails from her. Supposedly this girl’s still alive inside ‘The Wired’, which is the internet, and that it turns out God’s also there! What a bargain. This pushes Lain, a girl previously not so interested in technology, to learn more about how computers work and the internet, which seems to be growing larger every day.

Where does the show go from the first episode? You’ll have to watch.

We’re not saying ‘Duvet’ by the English band Boa is the best anime opening of all time, but we’re not saying it isn’t either. There wasn’t, and there still isn’t, another OP out there that sounds anything like this. Perfect for a show like Lain that has no equal.

All you need to hear its signature opening line, ‘And you don’t seem to understand…’ and you are instantly transposed to the hazy, surreal intersection of reality and the internet that is Serial Experiments Lain. Honestly, we could probably do a whole feature-length article on this song.

It’s sort of funny in retrospect, but back when the anime first came out, before there was Wikipedia, and the internet, like in the show, was still a growing new frontier, anime fans had no idea who Boa was! People weren’t sure if ‘Duvet’ was performed by BoA, the popular singer who originally hailed from Korea, but way before the K-Pop boom was successful all over Asia.

While details aren’t too clear, Yoshitoshi ABe and the band Boa had made some kind of connection in the mid-90s, which led to Duvet being used as Serial Experiment Lain’s unforgettable opening.

Serial Experiment Lain is one of those shows that’s vague to begin with, and as it crawls on, it only gets more mystifying. Like Evangelion, people have discussed and debated the plot and the ending for years. We’ll try to keep it as simple as possible.

A young girl, Lain, becomes interested in computers after receiving emails from her dead classmate who claims to still be alive in ‘The Wired’. An analog for the internet, Lain becomes more and more interested in The Wired and begins spending more of her free time inside of it. This is at odds with a group of girls saying they saw Lain at the Cyberia Club, a cool techno club where you can buy a drug called ‘Accela’ if you know the right people.

To Lain’s recollection, she had never been there. When she goes to check it out, she ends up smack dab in the middle of a shooting by a man under the drug’s influence.

Soon after, she gets sent a mysterious computer chip in the mail and goes to talk to kids she met at the Cyberia Club to see if they know anything. One says they saw Lain in The Wired, but acting much more obnoxious than her real-life self.

Again, no recollection. As she gets more into The Wired and upgrading her PC, she discovers a group called Knights of the Eastern Calculus who seem to be responsible for a number of wired related suicides. Secret agents begin to spy on her in real life.

Lain begins to hallucinate The Wired in real life, and she’s not the only one. At one point a giant image of her appears in the sky and children are able to see it. The agents confirm that the Knights have begun to target Lain when part of her PC blows up.

Soon after, we see Lain shift personalities in real life when talking to the agents, confirming that the regular Lain and wild one are both the same. By this time, she realizes that she’s so integrated with the Wired that she can affect reality. She first does so by altering the memories of her classmates, who think Lain spread rumors about her one true friend Alice.

Backstory about how research that showed consciousness could be communicated through networks, and how a researcher named Masami Eiri commited suicide. Lain receives a new microchip from someone at Cyberia and one of the kids from the club, Taro, reveals to her the chip contained a code made by the Knights to mess with human memory.

Lain then meets Eiri himself in the Wired who claims she no longer needs a body to live because she exists in the Wired. Eiri’s worshipped by the Knights as the God of The Wired but after Lain’s encounter with him, she leaks a list of the Knights members who proceed to all get murdered by the secret agents. It’s now the point of no return for everyone involved.

Lain successfully installed her Navi OS into her own brain and watches as the line between the real world and The Wired starts to erode in real-time. As the agents try to escape, they die simply by processing a picture of Lain presented directly into their eyes. Lain assumes the role of destroying the barrier between net and reality, until Alice stops her.

While Lain believes humans no longer need bodies because of The Wired, Alice convinces her otherwise using her heartbeat. After a final confrontation with Eiri over who will be the true God of The Wired, scarring Alice is in the process, Lain realizes she has to delete herself from everyone’s memory to prevent Alice from being hurt.

Essentially at the end, Life is reset and Lain goes on as the omnipresent true god of The Wired who can descend upon reality where and when she wishes.