Into an Abyss: A Disturbed Sister Analyzes the Anime Oreimo and Its Ending

I consider myself a fairly open person.

I’m all for people liking what they like as long as they aren’t harassing or hurting others.

But with that said, I draw the line at characters being subjected to excessive, gratuitous violence…and incest.

I cannot handle incest in fictional media for the life of me.

I couldn’t even handle the pseudo-brother/sister relationships and incestuous themes present in fantasy RPG Fire Emblem Fates and fantasy/sci-fi show The Irregular at Magic High School. I don’t think I could ever bring myself to watching the trainwreck that is HBO’s Game of Thrones for, well, more reasons than just the one at this point.

Regardless of my feelings on the matter, ‘incest is wincest’ obviously has a market; at least when it comes to male-oriented anime series and written works.

And no series illustrates this more than Oreimo (available on Crunchyroll).

So, how and why was this light novel series-turned anime and its ending romanticizing ‘sibling bonds’ made in the first place? 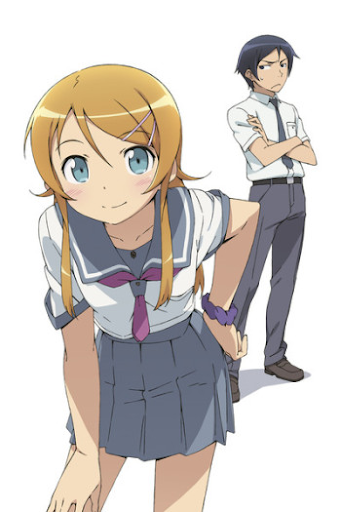 Tsukasa Fushimi’s comedy Oreimo was produced by the Anime International Company (AIC) of Oh My Goddess! and My Bride is a Mermaid fame (both which I recommend) in 2010.

The show has since spawned a second season and three visual novel video games.

The story follows estranged siblings Kyousuke and Kirino Kosaka as the former learns of the latter’s otaku hobbies that she had previously been keeping secret. The pair get the chance to bond and reconnect over said secret while encountering other characters with their own quirks along the way.

Now, if it had only stopped there…

Our protagonist Kyousuke Kosaka is as normal as they come, a young man resigned to living a simple life. However, this changes the moment he finds his sister’s eroge stash.

Though uncertain at first, Kyousuke slowly devotes himself to being a better brother to younger sister Kirino and discovers her lesser-known sides as a ‘little sister’ eroge-lover, model, and star student. The siblings’ back-and-forth is what drives the bulk of the plot, as Kyousuke is very much the passive player to Kirino’s (sigh) tsundere tendencies.

Kirino Kosaka is my least favorite of the ‘dere’ archetypes, being the combative, but coy tsundere. To her credit, she’s confident, headstrong, and knows what she wants. Even if that something is her (sigh) brother and eroge novelist dreams.

So with all that said and done, let’s get into the how and why.

After two seasons of uncomfortable ‘will they, won’t they,’ the finale results in Kyousuke and Kirino staging a marriage in name alone before deciding to return to their previous arrangement as ‘normal’ siblings.

I’m convinced it’s people without siblings who end up making things like Oreimo. I certainly hope that’s the case considering I’d rather not think about the alternative.

Aside from the health-related and societal expectations surrounding incest, the subject is often, unfortunately, linked to familial abuse and trauma in a modern context.

It’s not a subject to be taken lightly by most non-comedic means.

Then again, it’s often the temptation of experiencing something forbidden, the taboo, via a fictional medium itself that draws people to relatively harmless works like Oreimo.

We humans love, love, love going against the grain. We love the idea of being rebellious a la dystopian genre style and ‘sticking it to the man.’ And for some people, this can be done by indulging in taboos.

That which should not be discussed nor named can be quite fascinating.

Those without siblings may consume stories with incest from a ‘safe’ distance in which they possess no prior knowledge grounded in reality on the matter. You see, I happen to be a sister to a younger sibling, so that kind of content gets a big ‘no’ from me.

And yet, I would be remiss not to mention how Japan’s more traditional gender roles in comparison to those of the United States play into incest being as popular as it is.

While Japan is modern in many respects, its culture remains closed off to marginalized people and relies on larger society operating under gendered, specific, rules.

With that in mind, Japanese men, in particular, may find a misplaced sense of comfort in the idea of a woman ‘close to home’ and ‘low effort’ being a potential romantic and/or sexual partner. 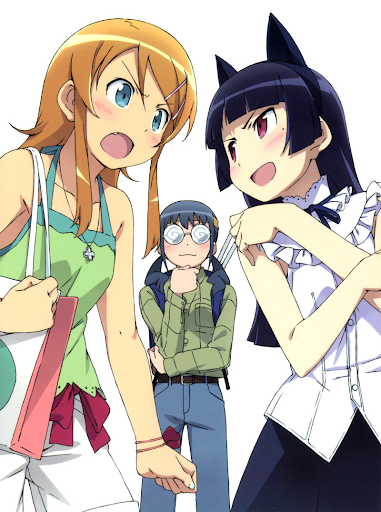 This fantasy is what makes up Oreimo’s core, tying pressure and power together with a less than neat bow.

Why are harems so popular? Oreimo deals in harem tropes with the five non-Kirino love interests so as to provide a power fantasy (which, in itself, isn’t bad nor wrong) in which Kyousuke, with his average looks and work ethic, can score with multiple women.

However, no matter how you spin it, stories with incest tend to either ignore or side-step the obvious lapses in agency and authority within such a dynamic. It can never be and will never be an equal relationship.

It’s not meant to be. That’s not the appeal.

I just think it’s telling that many shows try to work around this by revealing brother-sister pairs as ‘kissing cousins’ raised as siblings and/or step-siblings unbound by blood.

Now, that’s a whole other can of worms.

On that note, I think the non-incest aspects to Kirino Kosaka and her sisterly fantasy (as well as the niches filled by Ruri Goko and Saori Makishima) that make her an appealing love interest are also worth talking about.

Though if I’m being honest, said aspects still have a little bit to do with incest.

After all, Kirino’s otaku hobbies directly tie into her accessibility as a romantic partner.

Kirino being interested in ‘little sister’ eroge not only foreshadows her and her brother’s sudden change in dynamic, but serves as a nerdy pastime for the siblings to bond over.

Even if Kyousuke isn’t at all into this stuff from the get go.

Give it two seasons, my boy.

While the damaging mentality of, or rather, pressure to be ‘one of the boys’ and ‘not like other girls’ is one that doesn’t get touted as much these days, it still exists in guy-heavy circles.

Kirino’s hobby of choice happens to be a pastime that caters to men in fiction (as men tend to call the shots in creative industries) and in real life. Thus, making her ‘one of the boys.’ She’s cool. She’s with it. She gets what it means to have a sister complex. Which in turn, makes it ‘okay’ for her brother Kyousuke to be into it!

The siblings deciding to dive into the world of ‘little sister’ eroge may be framed as the younger Kirino’s idea, but the subject matter ain’t no coincidence.

Mangaka Fushimi knew exactly what he was doing by having his female lead take the reins (a fantasy in itself tied to my previous point on male protagonists putting little effort into their relationships)…all the while giving Kyousuke the final say.

As for Ruri and Saori, their hobbies appeal to guy-heavy, albeit niche, circles too.

Ruri, who also goes by her online persona ‘Kuroneko’ (‘Black Cat’) among a select few, is an arrogant, gothic lolita fashion-wearing chuunibyou who parades as her favorite Oreimo-exclusive anime character ‘Queen of Nightmare.’ However, she proves a caring person at heart time and time again.

Even if that caring side should come to the surface in the form of putting aside her own feelings for Kyousuke to support his and Kirino’s forbidden love.

Saori, who also goes by her online persona ‘Saori Bajeena’ (a reference to the Gundam franchise’s iconic recurring antagonist Char Aznable/’Quattro Bajeena’), is a calm and elegant woman with an outgoing otaku side.

She’s only portrayed as a love interest for Kyousuke in the Oreimo game, Ore no Imōto ga Konna ni Kawaii Wake ga Nai Portable ga Tsuzuku Wake ga Nai (There’s No Way “My Little Sister Can’t Be This Cute Portable” Could Continue), but her particular fantasy as a picture perfect nerdy girl stands.

Kirino, Ruri, and Saori all cater to the male gaze in their own way, which again, isn’t a bad thing.

This is the blatant appeal of a show that takes the plunge into a popular fetish.

On the other hand, it gets to be a problem when characters in a popular show are used as mouthpieces for a dynamic fraught with problems with no real pushback.

To bring this discussion back to Oreimo’s infamous ending, as much as it tries to frame itself as a relatively harmless ‘phase’ between siblings, this in no way erases or undoes the show’s ego-stroking, unhealthy nature (fetish fuel aside, Kyousuke and Kirino are no good for each other as individuals, let alone siblings).