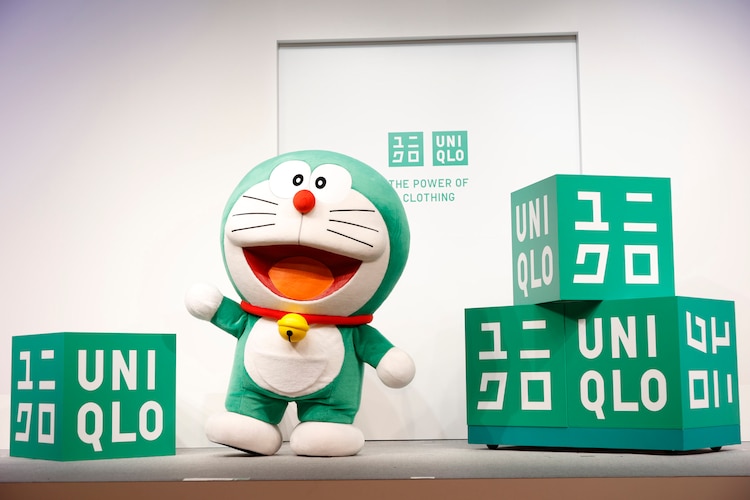 As brands embrace sustainability in a number of industries, Japan’s largest fashion brand Uniqlo has recruited Doraemon and given him a new shade of green to promote the company’s own sustainability efforts.

Everyone recognizes Doraemon, even outside of Japan, where the chances of having read the manga or seen the anime in are far lower. They’re a loveable robot from the future that goes on adventures with Nobita and his friends. Taking advantage of how much of a beloved icon Doraemon is, Uniqlo have partnered up to spread awareness of their sustainability initiative.

The idea behind the collaboration is that Doraemon’s family-friendly nature and accessibility to a wider audience can be used to make messages about recycling and sustainability that some may find hard to understand more accessible to a wider audience. It’s a shame no sustainably produced clothing that matches the company’s message is being made to show that the future is possible and featuring the rather aesthetically pleasing mint-green Doraemon, named its ‘Sustainability Mode’, but it is a positive message to share in a fun and accessible manner.

After all, they’ve done Doraemon clothing before. Doraemon is happy about it too! The robot was apparently quoted as saying, ‘I’m Doraemon and now I am green! I’ll do my best in my role as Uniqlo Global Sustainability Ambassador to help create a better future!’

The Doraemon promotion won’t just be limited to the company’s Japan-based stores but to all its stores around the world, with the new mint-green Uniqlo logo also being a prominent part of the planned campaign. It’s a positive and necessary campaign as the world comes to grips with the global ecological crisis and tries to tackle climate change. Getting the message out however you can is needed, and if helping the planet requires a cute futuristic robot, so be it.