A Happy Place: What’s the Deal With the Anime SCHOOL-LIVE!? 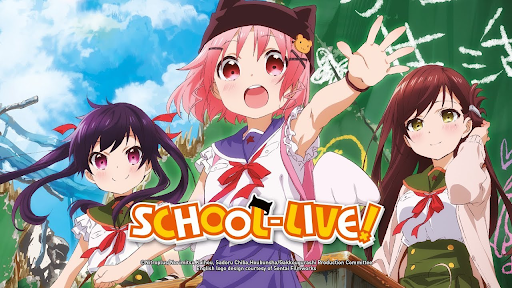 Puella Magi Madoka Magica may not have been the first magical girl anime to dive into the darker aspects of the genre, but the way it handled said darkness (with a core group of cute girls doing not-so-cute things and unique designs) is what made it iconic.

While I have yet to see a show hit quite as hard as Madoka did since its debut in 2011, the dark fantasy/survival Magical Girl Raising Project (2016) comes close in terms of at least looking the part.

However, in terms of delivering the same existential dread as Madoka, SCHOOL-LIVE! takes the cake.

It’s easy to make something for the sake of shock value alone, but SCHOOL-LIVE! has so much more going for it than its startling first episode.

The show uses a cute, moe, art style to highlight just how devastating and how sudden its inciting event was and continues to be for its unassuming cast of schoolgirls.

Needless to say, the power of juxtaposition is strong with this one… as is the number of characters dealing with survivor’s guilt.

So without further ado, let’s hunker down and take a look at SCHOOL-LIVE!.

Our story opens with four girls who partake in the exclusive and unusual ‘School Living Club,’ their activities comprising… well, monitoring the halls and staying the night at their high school.

The club grounds itself in the classic elementary/middle school fantasy of sleeping over at one’s school with crushes and friends. An innocent enough fantasy methinks.

However, if this premise still sounds a bit too weird, even for a fictional context, you’d be correct.

In fact, rather than exploring their school’s nooks and crannies a la haunted house style, the group is forced to deal with literal monsters.

I don’t recall how my younger self managed to start SCHOOL-LIVE! without knowing its shtick from the get go, but I wouldn’t have had it any other way.

The first episode left me ravenous for Episode 2.

By the end of the pilot, it becomes all too clear that our main girl, the kind and optimistic Yuki Takeya, is an unreliable ‘narrator.’ She sees the good in everything, but should you as a viewer keep your eyes peeled, you’ll notice that Yuki’s surroundings are slightly off.

As it turns out, the School Living Club is a cover of sorts and its members are the sole survivors of a zombie apocalypse that overtook the city weeks prior to the first episode. With that said, Yuki suffered a mental breakdown during the tragedy and has since been stuck in her own ‘happy place.’

Thinking it’s for the best, the other club members enable her delusions.

The rest of the show alternates between moments of terror and slice-of-life shenanigans as the quartet struggles to make the most out of each day.

SCHOOL-LIVE!’s characters, plot, and presentation are all on point. Should you decide to take the plunge and watch it for yourself, take note of each episode’s opening.

Yuki is very much the heart of the School Living Club.

Yuki’s a shoujo-esque protagonist to a fault, her boundless energy keeping the group’s spirits high, even in the face of an irrational reality.

The show also takes care not to make her fragility a liability for the entire series. We get a compromise later on.

The club’s advisor is the oft-forgotten Megumi ‘Megu-nee’ Sakura, a young teacher who keeps an eye out for Yuki in particular.

The club’s true ‘Team Mom’ is older student Yuuri Wakasa who oversees the girl’s daily schedules with a perpetual smile despite her own mental problems.

The ‘muscle’ of the club is the headstrong Kurumi Ebisuzawa who defends her friends from stray zombies with shovel in hand.

And last but not least are the pragmatic Miki Naoki and Shiba Inu puppy Tarōmaru, both of whom were saved by the club during a scouting mission at the local mall.

As of January 2020, the original SCHOOL-LIVE! manga has been put to rest.

There hasn’t been news of a potential Season 2 since the show’s finale in 2015, but just last year, a live-action film adaptation was released featuring J-pop group Last Idol.

While the anime industry is always coming up with new adaptations and original stories, I won’t be forgetting the narrative void left in SCHOOL-LIVE’s wake anytime soon. With luck, perhaps the film inspired like-minded works to be put into production.

Kirara Fantasia Brings Together a World of Moe Characters