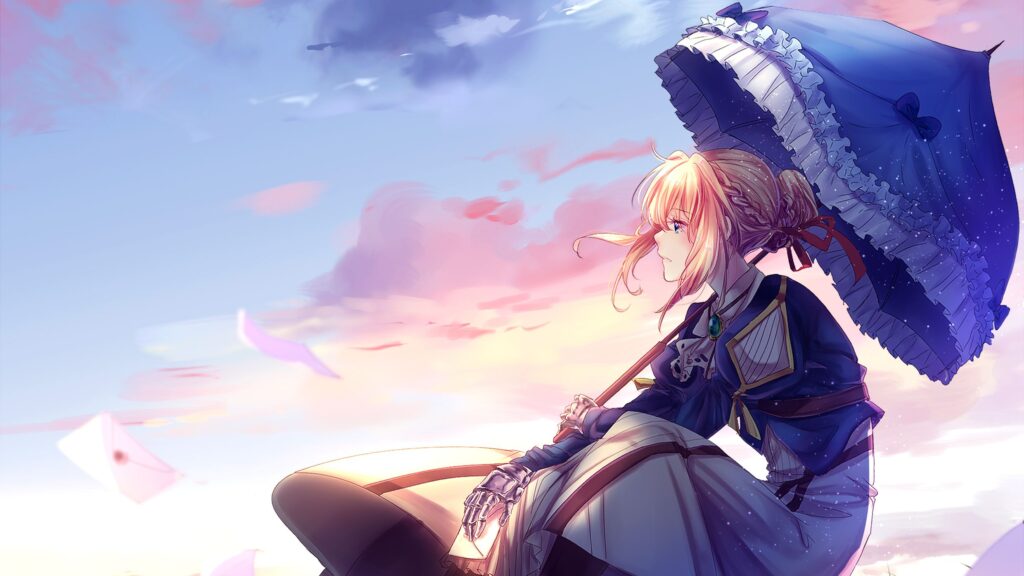 What Is Violet Evergarden? Kyoto Animation’s Most Emotional Anime

Kyoto Animation has played a pivotal role in the anime industry these past two decades. The studio has become adored by its fans for its painstakingly detailed animation and relaxed stories that are light on action and heavy on emotion. The renowned ‘KyoAni style’ was perfected in works like Clannad and Hibike! Euphonium, but 2018’s Violet Evergarden was when Kyoto Animation went all-out to go above and beyond the boundary.

Despite its existence being barely over two years, Violet Evergarden has since become one of the 2010s defining anime, and gracefully rests within MAL’s Top 100. And for good reason. Its cinematic visuals, combined with the story arc of its damaged but beautiful main character, provides an emotional pull at the heartstrings that refuses to let go with each and every one of its twelve episodes.

Violet Evergarden would be the official debut of Kana Akatsuki, who worked on her light novel for over six months alongside illustrator Akiko Takase. Akatsuki was inspired by her love of Kyoto Animation, particularly Clannad: After Story, and upon completion submitted her work in the fifth annual Kyoto Animation awards in 2014. 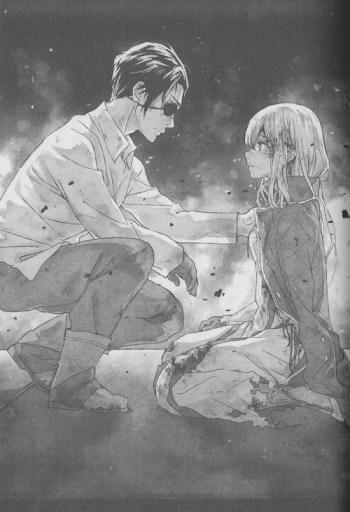 Akatsuki’s work ethic paid off when Violet Evergarden won the first-ever Grand Prize at the fifth annual Kyoto Animation Awards in 2014. The previous four ceremonies existed to give up-and-coming light novelists a chance to shine. For the fifth one, ceremony judge and anime director Taichi Ishidante was immediately blown away by Akatsuki’s novel, and saw a golden opportunity within its pages. ‘I felt something quite captivating about the protagonist,’ Ishidante would later say. ‘And since Akiko Takase’s illustrations were slightly different in style to KyoAni’s works at the time, I also felt that Violet Evergarden could provide a new challenge for the studio.’

In typical KyoAni fashion, Ishidante and his team would spend endless hours breathing gusts of life into Violet Evergarden’s anime adaptation. Ishidante assembled a committee composed of Pony Canyon, ABC Animation, and Lantis to help produce the anime (Netflix would only purchase the streaming rights). The anime adaptation would be announced in May 2017, with an animated commercial promoting the light novel complimenting the news. After four years of laborious production, Violet Evergarden’s anime finally went up on Netflix in Winter 2018.

Saying all of this, we’d be remiss if we failed to mention a particular video detailing the production of Violet Evergarden. Created by Jack Johnson and Mr. Nies Guy of Under the Scope, this 45-minute-long video is an epic sprawl of a documentary filled with insightful investigation and devoted KyoAni fanaticism. Every minute of it is more than worth your time, so check it out when you get the chance!

The World of Violet Evergarden

One quick glance at the Violet Evergarden anime and you can easily detect some Miyazaki vibes at work. Howl’s Moving Castle was clearly a primary source of inspiration here, with its early 20th century environments and themes of love being prominent throughout the series. Of course there’s a war that serves as the backdrop too, but unlike Howl, Violet Evergarden takes place after a war, and its main character is far from being lively like Howl’s Sophie.

The character of Violet is one rife with conflict and trauma hiding behind her plastic, blank, unsmiling face. Being a former soldier, nay an unstoppable killing machine, has rendered her emotionless, and she goes ballistic when her beloved is left to die on the battlefield. Unable to process whatever emotions she has left, Violet joins the CH Postal Service to become an Auto Memory Doll and write letters for others who have trouble expressing their emotions in print form. But to Violet, it’s more than a job. Above all, it’s Violet’s personal quest for love and redemption.

The show is largely anthological in nature. Though there is an underlying plot, many of the episodes are self-contained and involve Violet experiencing her emotional growth through the people she writes for. People like the playwright Oscar Webster to the youthful Ann Magnolia act as guides through the former-soldier-turned-ghostwriter’s journey to understand the complexities and depth of the human soul. 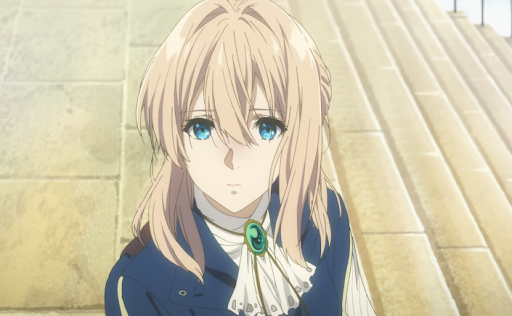 Despite being described as a girl ‘who appears to have popped out of a fairy tale,’ Violet’s backstory is far from being whimsical. Abandoned as a child, she was raised by the military to become a killing machine to fight the war that precedes the series. Towards the end of the bloody affair, she lost both of her arms and bore witness to the death of her dearly beloved Gilbert. Her prosthetic arm replacements and Gilbert’s last words inspire Violet to become an Auto Memory Doll, setting the stage for the rest of the series. 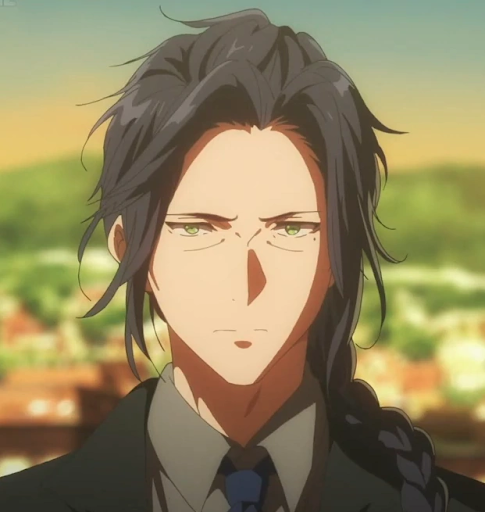 Mild-mannered and reserved, yet rough in appearance and tough as nails on the battlefield, Gilbert was a prominent military major and a father figure to Violet. He was also the first person to ever treat Violet as a person instead of a weapon for war, and was the only family she ever had. His injuries left him AWOL and presumed dead, his final moments leaving a profound impact on Violet. 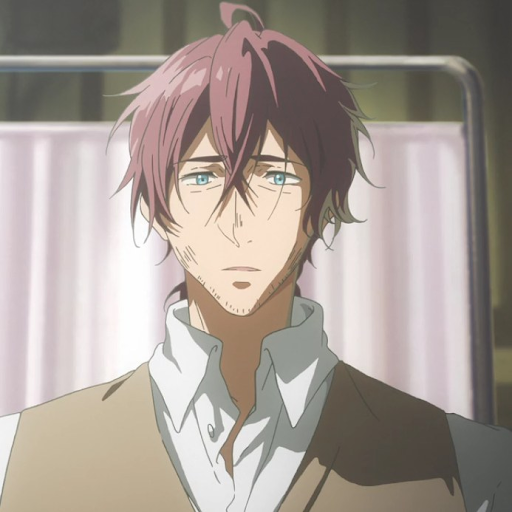 One of Gilbert’s best friends, Claudia would take Violet under his wing after Gilbert’s disappearance at the end of the war, and even employed her in his postal company as a Memory Doll. Very early on, Claudia says to Violet that ‘everything you’ve done so far has sparked a flame that is now burning you up.’ Much like Gilbert’s final words, Claudia’s message to Violet seems cryptic to her at first, and she spends a good amount of the series trying to piece together what it means.

Just last September, the film Violet Evergarden: Eternity and the Auto Memory Doll hit Japanese theaters. It was a run that was limited, but still very lucrative, with box office reports 750 million yen made in just four weeks. This film served as just a side-story taking place a few years after the events of the TV series ended and was merely just the appetizer to the main course: the Violet Evergarden feature-length film that takes place immediately after the final episode. 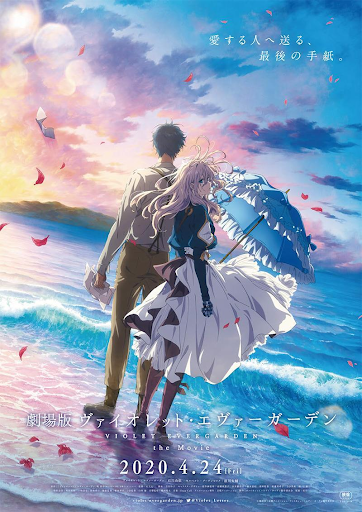 Without spoiling too much, Violet finally understands what Gilbert’s dying words meant, but only when she gets a commission request from a mysterious, not-yet-revealed client. Though the show’s ending doesn’t show who he is, the movie does, and let’s just say that this person’s presence is something Violet is all-too-familiar with.