Trapped in A Virtual World: .hack

.hack, otherwise known as Dot Hack in order to avoid confusing people or computers, is a video game and anime franchise which takes place inside a fictional MMORPG (massively-multiplayer online role-playing game).

The games and the multiple anime series collectively tell the story of an online world known as The World — not the most creative name, but something like WarQuest FantasyLife would be worse.

Although the different games and anime shows tell different parts of the story, there is a common theme throughout the franchise. There is also something of a timeline that can be followed, although there are some leaps between game and anime.

In all versions of the story, something has gone seriously wrong with The World. People have gotten trapped in the game.  They go into a coma in real life and get literally stuck online.

Of course, the story isn’t really about the technology, but about the people who are affected by it.

Online, networked “virtual worlds” have existed since the 1970s. Obviously Mazewar (1974) and other early examples of Multi-User Dungeons (MUD) would be considered extremely primitive by today’s standards.  But, they did set the stage for what came later.

The graphics and the programming slowly improved until players would be able to roam around more detailed and realistic realms such as Ultima Online (1997) or EverQuest (1999).

By the time that the original .Hack//Infection video game came out in Japan in June of 2002,  gamers were used to the idea of online worlds where customized characters could communicate with other players, form teams, fight monsters, and so on.

What .hack adds is the promise of a truly realistic, virtual reality game.  In the .hack anime shows, characters in the game are clearly able to do just about anything they can do in the real world; movement and expressions are all natural-looking.

We have only just recently started to catch up to the fictional world depicted in .hack, with new technology such as VRChat and the Oculus Rift headset.

.hack didn’t anticipate such weirdness as Ugandan Knuckles,  but it does have player killers and other griefers.

Project .hack was followed by .hack Conglomerate, which we’ll look at later.

The first three .hack games came out in Japan in 2002, and they arrived in North America a year later.  These were .hack//Infection, .hack//Mutation, and .hack//Outbreak.

The fourth game, .hack//Quarantine, was released in 2003.  These games were all on the PlayStation 2.

Fortunately, you can enjoy Sign without having played any of the games, and you can play the games without having watched any of the anime. Of course, you get a more complete picture of the full story if you do both (or at least read an article such as this one, so you can learn about both).

The games came packaged with episodes of .hack//Liminality, an OVA series, so one might assume that you’re expected to watch that much.

Interestingly, Liminality is one of the few parts of the .hack franchise to deal primarily with the real world, instead of the game world — we see glimpses of players’ real lives elsewhere, but most of .hack takes place inside The World.

Sign tells the story of Tsukasa, a player who is stuck in The World. He suffers from memory loss.  He can’t log out, but he doesn’t know why.

Soon, other player characters are concerned about Tsukasa.  Mimiru and Bear start to investigate this seemingly impossible situation.

Tsukasa has a guardian, the mysterious and legendary item known as the Key of the Twilight.  Unfortunately, Tsukasa can’t control the item at first, and it attacks other player characters.

The story gets complicated with some player characters discussing their real-life problems, which they’ve gone online to avoid.  There’s a lot of Seinfeldian talk about nothing, which echoes real-life online chats. The series moves slowly, but it never feels like it needs to hurry up.

Some of these chats also edge close to romantic interactions.  BT and Bear’s relationship shifts around, as the two have gotten to know each other and have even met in real life. Meanwhile, Silver Knight seems to be permanently stuck in the Friend Zone with Subaru, leader of the Crimson Knights.

Silver Knight (Ginkan), second-in-command of the Crimson Knights, often ends up as the comic relief for the series.  He is a serious and deadpan protector of justice with a silly-looking helmet, which puts him in the same category as Batman.

A show which was so serious and philosophical for 25 episodes finishes with a party in the OVA episode, Unison.  Unison takes place after the games, so characters from .hack//Sign meet characters from the games.

The first four games take place after Sign.  Many of the main characters look very similar to the Sign characters, either because the game gave them similar player character designs or because they chose similar looks.

Kite and BlackRose investigate the mysteries of The World.   Kite’s friend, who plays online as Orca, ends up in a coma, as does BlackRose’s brother, Balmung.  (Balmung makes a brief appearance in .hack//Sign, while Orca is mentioned but never seen.)

The games simulate an MMORPG, but there is no actual online interaction with other players.  For example, players create parties to fight monsters within The World, but the other team members are computer-controlled characters. Players can also check in-game “email” while outside The World.

In general, throughout the .hack games and anime series, the owners of The World, Cyber Connect (a.k.a. CC Corp) are portrayed as negligent at best and corrupt at worst.  It is heavily implied that all of this could have been avoided if they had been better people.

Eventually, characters learn about Harald Hoerwick, the programmer who made The World, and how Hoerwick intended to make the perfect independent artificial intelligence.  There is also an epic poem, the Epitaph of the Twilight, which holds clues to the creation of The World.

The ultimate villain in the games is the Cursed Wave, a malevolent force from the Epitaph of the Twilight.

A fifth game, .hack//frägment came out in 2005.   Frägment is a remake of the original .hack game series.

Unlike the previous games, Frägment does have multiplayer online game abilities.  The online mode of the game allows players in a lobby to create a team.  Players can also chat, send e-mail, and post to an online board.

Legend of the Twilight 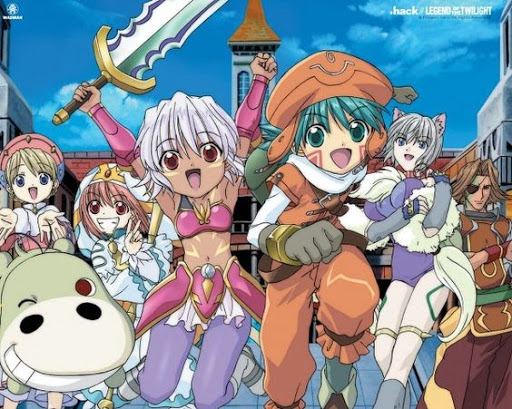 In both cases, the story takes place after the events of the .hack video games.  Twins Shugo and Rena win a contest.  The prizes are avatars designed after the legendary Kite and BlackRose.

Naturally, just like the previous characters, Shugo and Rena run into their own problems with The World.  In both the manga and the anime, Shugo receives the Twilight Bracelet, a mysterious and powerful illegal item.

In the anime, Rena falls into a coma.   In the manga, the Cobalt Knights, a group of administrators, capture Shugo.  In the anime, Cerulean Knights attempt to capture him.

In the anime, a hostile AI threatens The World. Shugo and Rena must save The World.

.hack Conglomerate is a sequel to Project .hack.    The Conglomerate includes all of the .hack//G.U. (or “Gu”) games — Rebirth, Reminisce and Redemption.

The G.U. games continue Haseo’s story.  He is still searching for Tri-Edge.   Tri-Edge is a version of Kite, also called Azure Kite or Azure Flame Kite.

In 2017, .hack//G.U. Last Recode was put up on Steam.   The Last Recode collection includes Rebirth, Reminisce, and Redemption. It also includes a fourth game, Reconnection.

.hack//Sign was available on Crunchyroll.  It is currently available at Funimation.

Note: .hack’s unusual title makes it difficult to Google. You will likely find many, many references to life hacks, game hacks, hackers, etc.  The name Hack could also refer to a 1982 single-player “roguelike” dungeon-crawler computer game which later became NetHack.