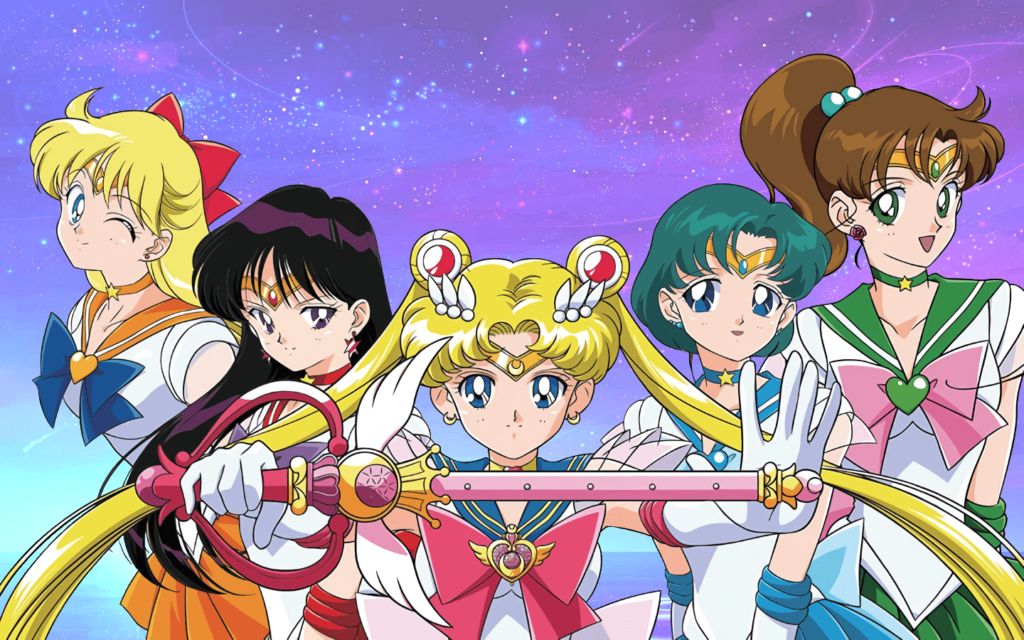 Sailor Moon is the quintessential magical girl series. With her distinctive, one-of-a-kind pigtails-and-odango hair, she is easy to imitate and parody. Internationally, she is one of the more common characters to cosplay.

But there is a lot more to Sailor Moon than the hair, the transformation sequence, and the catchphrases. Let’s take a look at this famous manga and anime series, especially its story arcs. How many episodes are there? How can you avoid filler anime episodes? And how does Sailor Moon Crystal fit into the story?

As others at OTAQUEST have pointed out, Sailor Moon is actually a sequel to Naoko Takeuchi’s earlier manga, Codename: Sailor V. The series lasted three volumes, and the character (aka Sailor Venus) was incorporated into Sailor Moon.

The first Bishoujo Senshi Sailor Moon manga (aka Pretty Soldier Sailor Moon or Pretty Guardian Sailor Moon) was published in December 1991. It continued for 60 chapters (or ‘Acts’) in 18 volumes, ending in February 1997. Different tankobon re-prints divided the story into a different number of volumes. But if your version has 60 acts, you have the full story.

In total, there were 200 episodes. If you remember far fewer episodes than that, you may have watched the DiC dub on TV, which had only the first two seasons, 82 episodes, and lots of censorship. (But it did invent the well-known ‘Fighting Evil by Moonlight’ version of the theme song.)

VIZ Media currently holds the English dub license, and you can stream the VIZ version on Hulu. 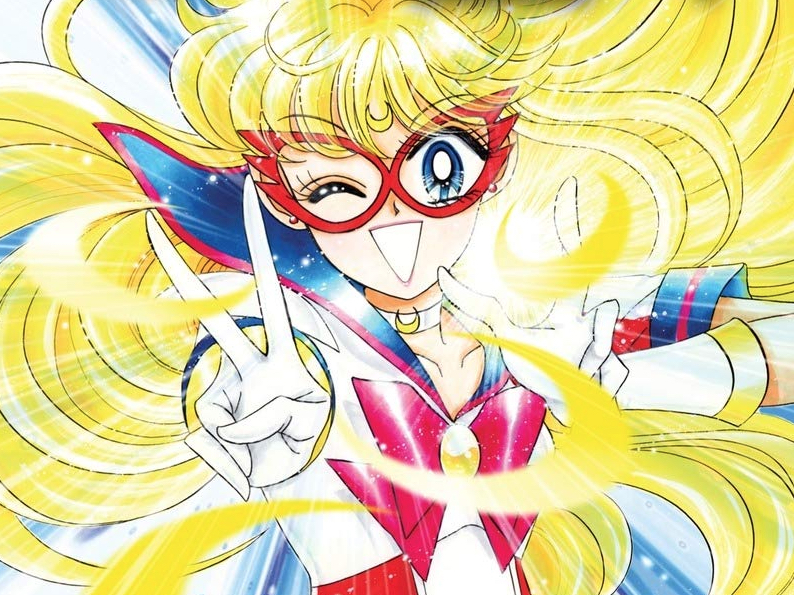 Tuxedo Mask is revealed to be Mamoru Chiba (who had earlier been dating Rei in the anime). Usagi and Mamoru remember their past lives as Princess Serenity and Prince Endymion. Luna and Artemis reveal the history of the Moon Kingdom. Tuxedo Mask/ Endymion is kidnapped and brainwashed.

At the end of the first season, the sailor guardians find the Dark Kingdom. All the other senshi sacrifice themselves to save Sailor Moon. Usagi rescues Endymion, but the prince dies fighting Beryl. Sailor Moon transforms into Princess Serenity. Serenity fights Beryl (who is possessed by Queen Metalia). Serenity defeats Beryl, destroys Metalia, and dies.

The Silver Crystal deus ex machinas all the good guys back to life. But their sailor senshi memories are gone.

The first half of the Sailor Moon R anime is sometimes given its own name as the Makai Tree Arc (episodes 47-59). It’s considered filler, but it explains how Sailor Moon got her memory back. It also introduces some powerful new attacks.

Black Moon really begins with the sudden arrival of pink-haired Chibiusa. Mamoru and Usagi are now in a relationship. The Black Moon Clan is after Chibiusa. We meet Sailor Pluto, guardian of the Space-Time Door. She allows the guardians to go to the future.

Chibiusa is revealed to be Usagi and Mamoru’s future daughter. Chibiusa is brainwashed into the older, evil Black Lady. As Neo-Queen Serenity, Sailor Moon turns Chibiusa back to normal. And together, the two destroy Wiseman, the Death Phantom. 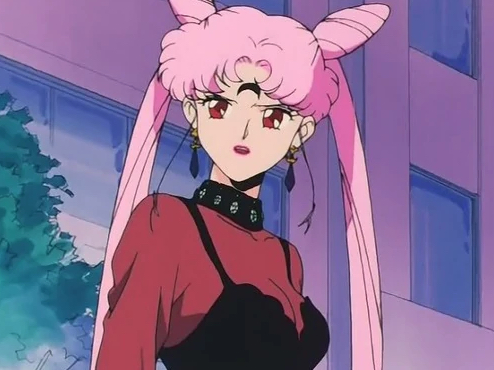 The sailor scouts face new enemies, the Death Busters, led by Professor Tomoe. Tomoe has a daughter, Hotaru, who will become Sailor Saturn. (But first, she becomes host to Mistress 9, the Messiah of Silence.) As the Guardian of Destruction, Saturn is seen as a potential threat if awakened.

Sailor Uranus (Haruka Tenoh) and Sailor Neptune (Michiru Kaioh) are introduced. These two are either lesbians or passionate cousins, depending upon the translation. Haruka is not a dude.

The outer sailor senshi need to find three Pure Heart Crystals which contain special talismans. Uranus and Neptune have two of them. The third belongs to Sailor Pluto. Sailor Moon transforms into Super Sailor Moon and defeats the leader of the Death Busters.

Hotaru is reverted to a baby, and will return later. 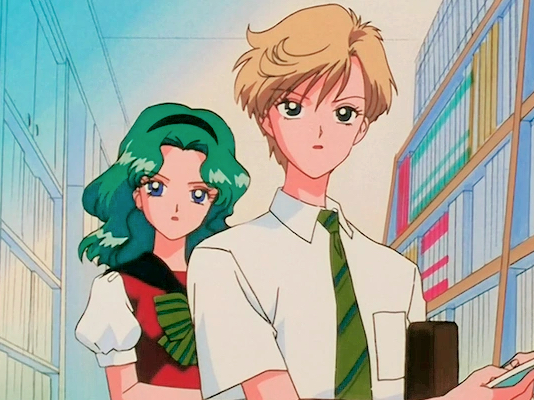 The Dead Moon Circus arrives during an eclipse. They’re searching for Pegasus, who appears in Chibiusa’s dreams. Zirconia leads the circus, but Queen Nehelenia commands Zirconia. Pegasus is actually Helios, guardian of the Golden Crystal of Dreams. Nehelenia gets the crystal, destroys Zirconia, and emerges from her mirror prison.

We learn about Nehelenia’s tragic past and desire to stay beautiful. Sailor Moon/ Princess Serenity rescues Chibiusa. During a battle, Nehelenia loses her beauty, and she seals herself back up in her mirror. Helios returns home.

Season 5 starts with a Nehelenia sub-arc (episodes 167-172): This is linked to season 4, as it finishes up the Dream arc. Sailor Galaxia releases Nehelenia from her mirror. Hotaru grows up quickly and becomes Sailor Saturn. Nehelenia forces Mamoru into her world. Sailor Moon transforms into Eternal Sailor Moon and follows Nehelenia. Sailor Moon takes pity on Nehelenia, which breaks her curse. 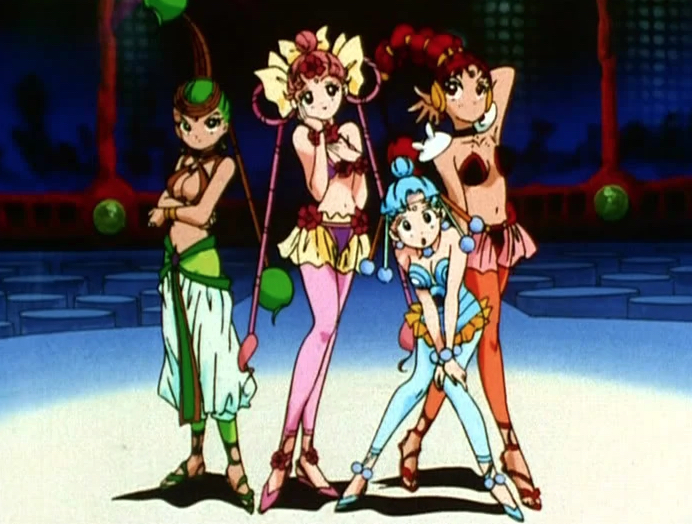 The Sailor Starlights arrive. The corrupted Sailor Galaxia leads the villainous Shadow Galactica. These are sort of anti-Sailor Senshi. They steal ‘Star Seeds’ from sentient beings. Their victims turn into Phages, who become the monsters of the week. 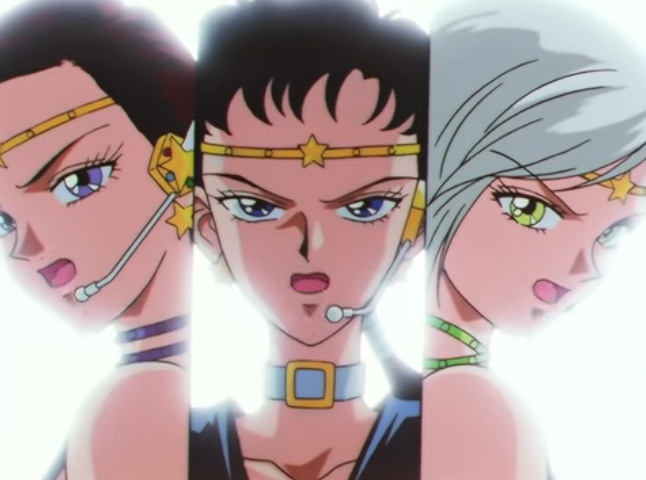 Sailor Moon Crystal (2014) squeezes all the Dark Kingdom arc (46 episodes in the original) into 14 episodes. This eliminates a lot of filler. It also matches the number of chapters in the original manga’s story arc.

Crystal’s second season reduces Black Moon down to 12 episodes. Season 3 (2016) eliminates filler from the Death Busters arc, for a total of 13 episodes.

The two Sailor Moon Eternal movies replace what would have been the fourth season of Sailor Moon Crystal. These movies retell the Dreams arc.

Warning: There’s a lot of filler in Sailor Moon. If you want to avoid the filler, watch Sailor Moon Crystal, which is reportedly 100 percent filler-free.