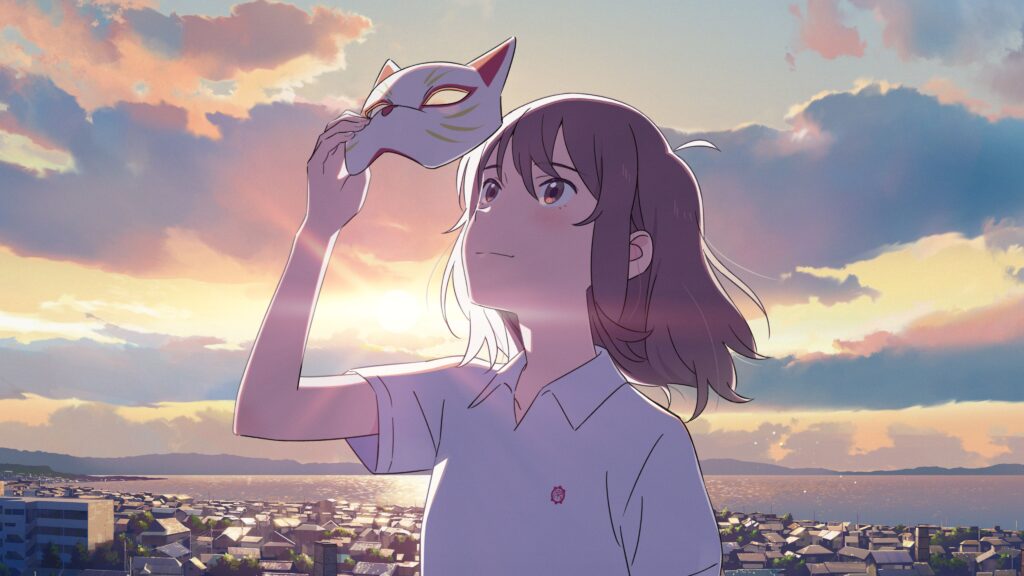 A Whisker Away is a much better English title for this film. The Japanese name is too convoluted to sound natural (literally translating to Wanting to Cry, I Turn Into a Cat), even if this lengthy original title succinctly puts forward the movie’s 1-sentence elevator pitch: a fantastical tale of love involving cats. Who doesn’t love cats, right? With such an easy-to-understand concept, no wonder Netflix was happy to jump on board to rescue the film after its planned cinema release was one of many COVID casualties.

Similarly, this change of plan for the film’s release works in the film’s favor. After all, with a talented team behind the wheel for this Studio Colorido production, with major names like Mari Okada on the script and Junichi Sato acting as one of the film’s 2 directors, you ensure that people will stand up and take notice when the film releases, while the film’s lack of originality and slight missteps are more easily overlooked on the small screen when you haven’t paid for a ticket. 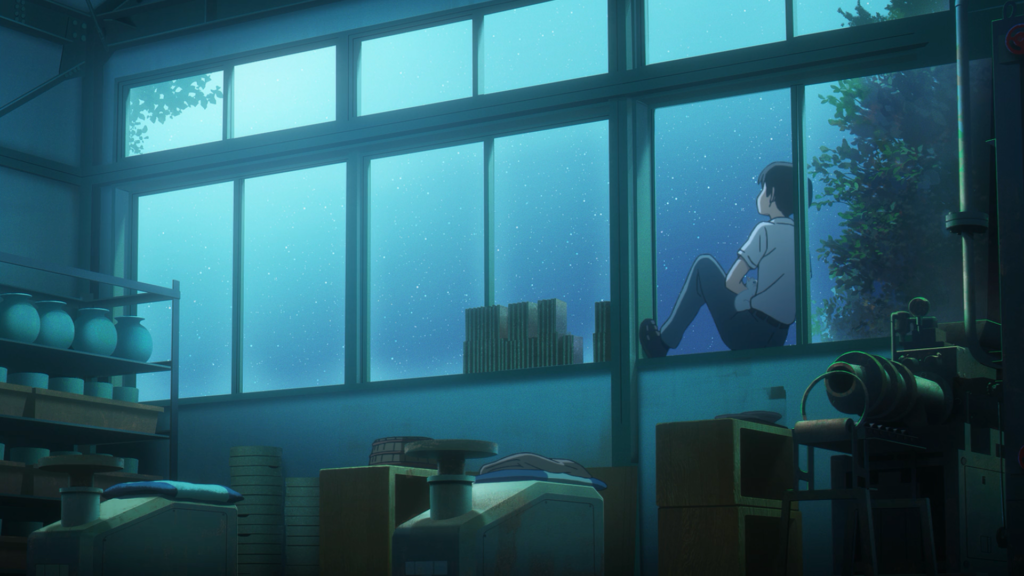 There’s a scene early on in this film that will make or break the movie experience for many. A Whisker Away is a story about the energetic Miyo Sasaki, of Muge. In this scene, just one minute into the film, Muge’s bashful energy is brought to the forefront as she forces her way into the life of her crush, Kento Hinode. Despite Kento’s indifference, Muge is obsessed with her rose-tinted crush. Every day, against the better judgment of others, she expresses her love by forcing her bountiful energy onto the indifferent boy, despite the derision this causes her from the rest of her class. Just hearing his voice is enough to make her weak at the knees.

This obsession, which gives off stalkerish vibes at points, could easily be off-putting, especially so early on. If you can’t accept her personality here, the rest of the film will be a struggle.

Even at this early point in the opening few minutes, however, we’ve already been introduced to Muge’s more withdrawn side and personal issues, after a disagreement with her divorced mother and the gift of a mask by a mysterious cat-faced Mask Seller. It helps to contextualize Muge’s energy as a front to make up for the issues she faces elsewhere. 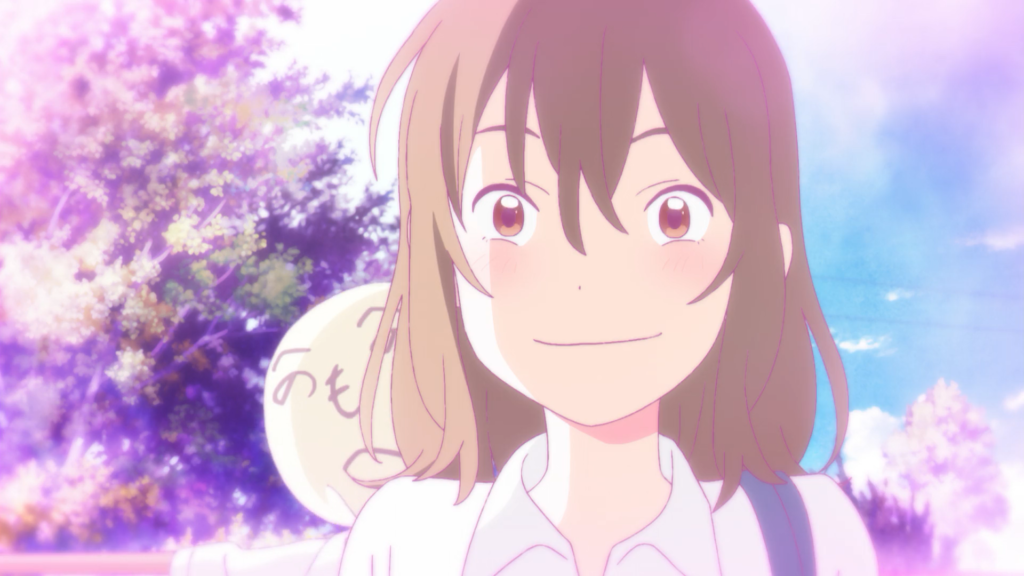 The reason why A Whisker Away is a better title for the film? The sense of mystery it gives off. By not giving away everything about the film before you even click play, you get the sense there’s more than meets the eye, and there’s more to Muge’s character than her over-compensating energy in equal turn.

For all A Whisker Away is being promoted and sold as a love story between these two polar opposites, this is a film about the masks people wear in public and private as they display their idealized self to the world, hiding their problems away from others. Using the mask Muge received as a literal representation of this, this mask allows for Muge to turn into a cat, letting her run from her self-esteem and family issues and into the arms of her crush, who, without the need to put up a front for the world to see, lets out his worries about his future to what he thinks is a stray cat from the street. 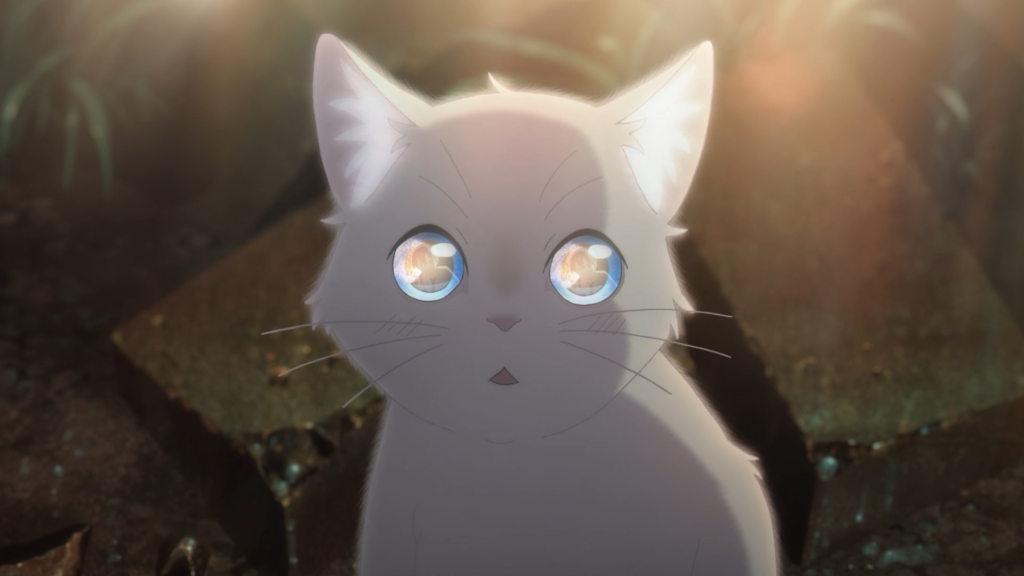 There’s much about the concept and its execution in these opening moments that I love, from the multilayered usage of physical and metaphorical masks to the movie’s writing which allows for distinct characterization and all these ideas to establish themselves within just the opening 10 minutes of the film. Yet it’s here where the film fails to make the next step I know the creative team behind this film are capable of, as the rest of the movie feels like it apes its superior counterparts instead of establishing a unique voice.

Mari Okada’s best works all focus on the theme of identity and self-worth, from Maquia’s story of finding new purpose when all is lost and you’re ready to give up to AnoHana’s story of confronting guilt and grief and moving on from the past, and much of the writing for the film feels like it combines the themes of these two works into a decent yet inferior product. 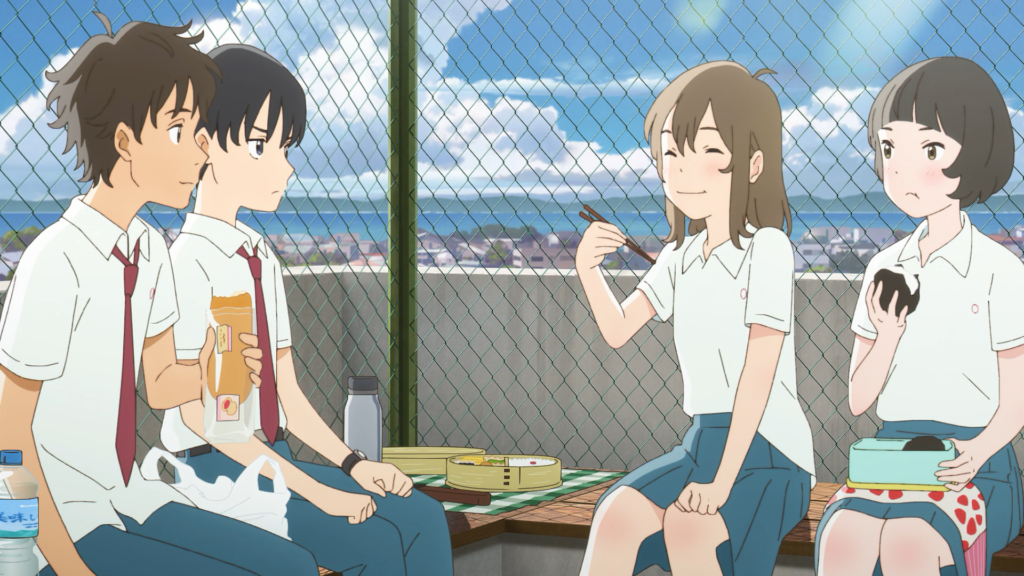 Muge’s cat mask comes with it the ability to make her transformation into a cat permanent. The Mask Seller is the voice in Muge’s head desperately pleading with her to throw away her humanity and run from her problems by becoming a cat permanently. Just as a person’s mask can be used to hide someone’s problems, the mask can be permanently discarded as though discarding their life away as something not worth living, which becomes a distinct possibility as the stress of school, love and family become too much to bear. Why keep living?

While I appreciate the family-friendly way the mask is therefore used to tackle the topic of depression, many of the key scenes relating to this development feel familiar and rehashed. Similar beats can be found in Okada’s other work and other recent anime movies, and I can’t help but feel that some of these scenes were handled better in those examples, too. While it’s still handled well, it plays itself incredibly safe. Ironically, the movie would be improved by embracing a messier outlook. Mental health is the focus but mental health is messy, without easy answers. Every use of the mask seems to bring with it renewed clarity that betrays what it’s like to actually deal with depression. Only very briefly in the final act is this messiness acknowledged, and I know Okada is capable of better on this front.

On the fantasy side, the visual aesthetic of A Whisker Away more broadly alongside the Mask Seller and many of the fantastical environments in the final act ape Studio Ghibli while never matching it, particularly Spirited Away through its connection to a spirit world. Again remaining too familiar while never surpassing it, I can’t say these moments are bad, yet they’re also dragged down by failing to find a unique vision. You can’t help but think of Spirited Away in the final act, and you similarly can’t escape how that film handles this better, either. 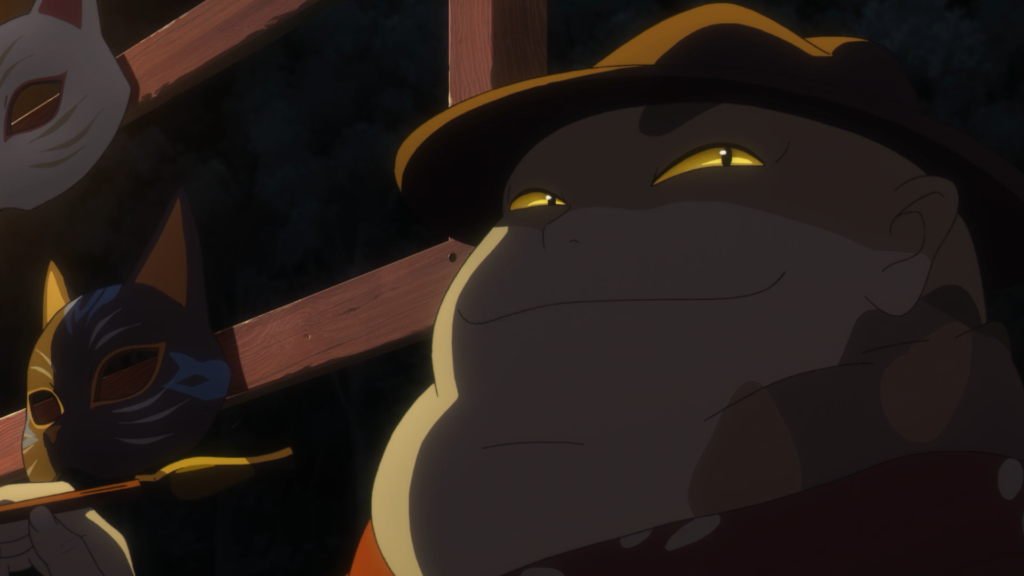 Even if the visual style isn’t unique, it is well-crafted. The animation is smooth and strong throughout, filled with minor touches and details that immerse the audience into the work itself. With the number of cats in this film, I appreciate the work that not only went into ensuring that cat behavior was mimicked but that also ensured that Muge’s cat-like actions are slightly off, clearly distinguishing them from the other cats.

Perhaps the biggest misstep comes through the movie’s final act, where the tone and messaging almost entirely shifts from the mental health and personal struggles that dominated the film to a confrontation with the movie’s antagonist. It feels like too much of a tonal shift and it causes the film to lose sight of itself for a brief spell near the end. Much of what happens ignores the themes the film has built up before bringing them back at the very end, and for all the strengths this moment has, it’s hurt by what came before it. 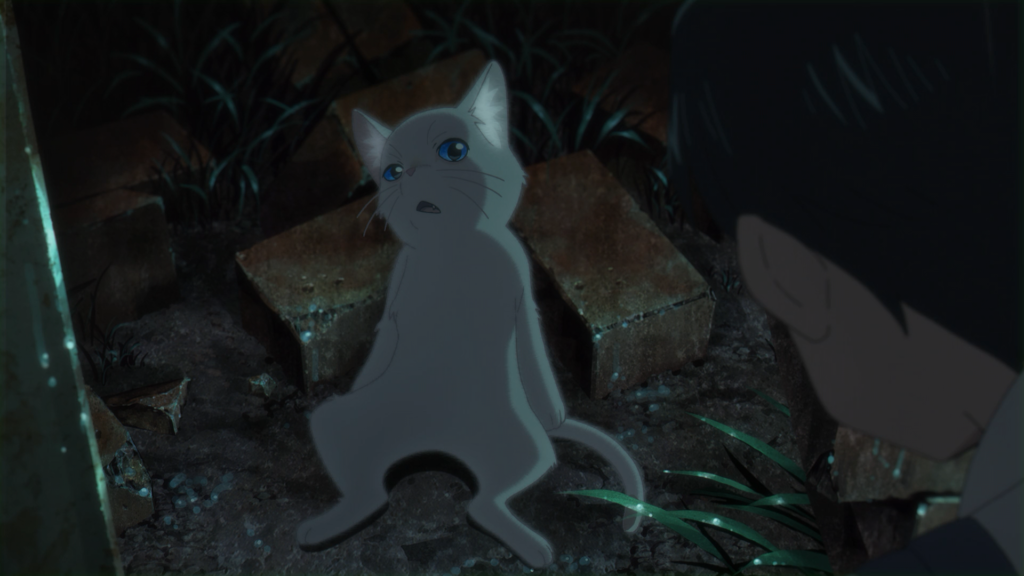 A Whisker Away, at its core, is a movie about human connections and the toll and joy it can bring. Essentially, the movie is about humanity.

When the film chooses to embrace this, even if it lacks in originality, the movie stands tall and strong. The inner turmoil of Muge and her love interest and the desire they have to change embraces what makes us human, and the problems she goes through with her family and self-esteem are equally emblematic of this. When it chooses not to, it loses its way somewhat.

Even then, we’re still left with a strong film, if one lacking the quality and unique flair the team behind the movie is capable of that would turn this good film into something truly great.

Still, it’s pretty decent. This cat lands on its feet.

A Whisker Away is streaming worldwide via Netflix.