A Retrospective on Trigger’s Ninja Slayer From Animation 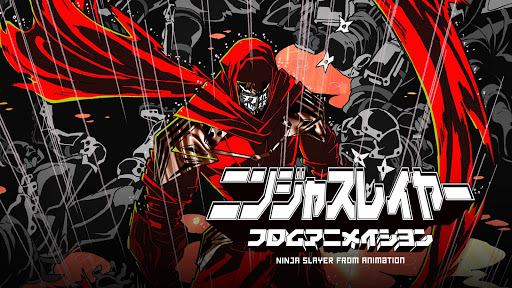 Within a Japanese cyberpunk city called Neo-Saitama, there exists the deadly Soukai Syndicate of ninjas. The story begins when a salaryman named Kenji Fujikido and his family are attacked by their members. As the man on the verge of death witnesses his wife and child slain, a vengeful ninja spirit known as Naraku Ninja comes to him and lends its ninja power. Together they form a ninja hellbent on fulfilling the sole purpose of killing all other ninjas: NINJA SLAYER.

I hope my synopsis of the series fills you with the same excitement that I had when I read a better version of it on the internet five years ago. As someone with a love for all things cyberpunk, thinks ninjas are neat, and loves the works of Trigger, I was fully on board when I heard about this anime.

While I enjoyed Little Witch Academia and Kill la Kill, the latter was my absolute favorite. I loved the action and serious moments in Kill la Kill and the synopsis alone for this new series was giving me similar vibes.

Upon further research, I saw that it was an adaptation from a science fiction novel series (which was then adapted to a manga). Upon FURTHER research, I saw that the authors “Bradley Bond” and “Philip ‘[email protected]’ Morzez”, as well as the whole story of how the series came to be, were likely fictional. The trailer released at 2014’s Anime Expo certainly added to the bizarre hilarity of it all.

By the time of release, I wasn’t sure if this would be something akin to Kill la Kill. But I remained pretty excited about it! No matter how it was, I knew what to expect from Trigger and I knew the end product would be entertaining.

I absolutely could not wait to see if Trigger would “save anime” again with what could only be extreme over-the-top action and beautiful use of colors and visuals. 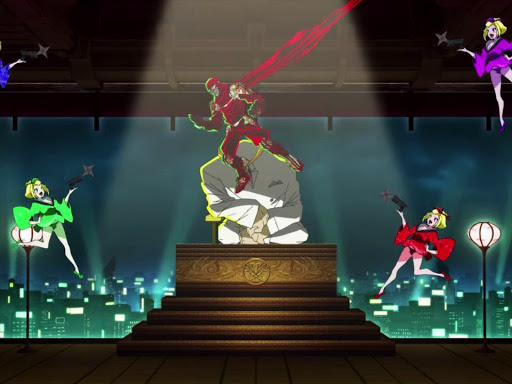 Now, the opening for Ninja Slayer From Animation gives some glimpses to how the entire show looks, but the majority of it looks just a little low-budget to what Trigger usually offers. And to be completely honest, I barely noticed thanks to the kick-ass theme! Boom Boom Satellites have a wonderful discography and this song does such a wonderful job of pumping you up for ninja slaying action!

Wonderful opening aside though, the series itself does look a bit…different. It was only later that I realized the signs had already been pointing to this, the biggest being that the director was Akira Amemiya. While Akira has an incredible career with a lot of range in the titles he’s worked with, at the time the only other series he worked on as the director was Inferno Cop.

For those who unfortunately don’t know, Inferno Cop was an ONA series released in 2012. With all but the finale episodes only three minutes in length each, the titular protagonist experiences an eventful adventure, from dealing with the underlings of an Illuminati-like group, waking up in a post-apocalyptic zombie-overrun future, to battling an ancient pharaoh.

Oh, and sometime in-between that he goes to hell after transforming himself into a car. It’s a wonderfully bizarre series with cheap visuals ala moving static 2D images around, but the short runtime leads to a quick pace that fits perfectly with the series.

It’s certainly not for everyone, but I still find it incredibly entertaining and would recommend it to anyone with its short runtime. Although I was disappointed to see this would be more Inferno Cop than Kill la Kill, I was still excited to see what this new series had to offer. I was just here looking to be entertained and Trigger never failed when it came to that.

And the first episode was really entertaining! It looked very low-budget at times but its absurdity was enjoyable to me. More importantly, it wasn’t just moving static images the entire time like Inferno Cop. There was actually some of that Trigger animation we all love in there.

I ended up coming away from the first episode with hope and I was looking forward to watching the rest of the series.

By the time I finished the series, I felt very mixed about it. If I had to pick a definite answer I’d have said it left me with more of a negative feeling. In retrospect, I don’t think I can choose a side. I’d liken it to an enigma if anything.

The character designs are pretty good in my opinion. They’re not as memorable as the character designs of Kill la Kill, but they are faithful to the source material. The usage of color outlines on the ninja characters (and Nancy Lee) adds a unique flair to the show.

Most of the lower-level ninja enemies have a pink outline, important antagonists have yellow, Nancy Lee has blue, Yamoto Koki has purple, and Ninja Slayer himself has green. The color choices fit very well with the aesthetics of each character, whether they emphasize a character’s color palette or contrast against it.

The series would continue to switch between Inferno Cop and typical Trigger-level animations. There is an awkward balance between the two, but some of the best art and animations are used for Nancy Lee and other female characters. 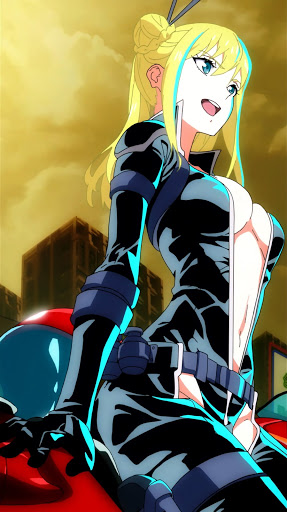 Ignoring the fanservice character design, it does look really good. When the art in Ninja Slayer is at its best, it looks fantastic.

The animations follow the same principle, with some of the best animations in the series being when Nancy is caught and tied up (repeatedly) or subdued and fondled by a perverted ninja. It’s certainly intentional, but it makes sense with the tone of the show and its source material.

The Misplaced Tone of the Anime

This leads to something else I need to go over: the tone. Kill la Kill manages to weave the comedy, action, and dramatic tones together into a wonderful product. Inferno Cop is a bizarre ride from start to finish and it never takes itself seriously.

Ninja Slayer From Animation does its best to represent the absurdity of its source material, but it doesn’t quite nail it. This is a show where the main character witnesses his family’s murder and uses the power of a vindictive ninja soul to fulfill both of their needs for revenge.

But, it also takes place in a world where ninjas must always politely greet each other before battling (even if they’re in the middle of a highway chase), enemies recite a death haiku and explode upon their death, and at one point in the history of this futuristic ninja world, there was a ninja who fought during the “Texan Revolution” and used a suplex technique called “The Alabama Drop” to kill his foes.

The source material feels like a parody and most would argue that it is. Female characters are sexualized and enemies are exaggerated in their evil tendencies. When it comes to action and story it’s played straight, but it’s the rules of the world that make it fun and entertaining.

What’s added with the anime adaptation is the comedic aspect of the art and animation. This extra element is the best and worst aspect of the show. The awkwardness of it can exude the same hilarity that Inferno Cop did.

When there’s a huge build-up to an enemy throwing out shurikens and the scene changes to a still-frame of Ninja Slayer rotating in place very quickly to deflect them, it’s funny because of the contrast. When moments of dramatic pause are lengthened to an awkward amount, it’s funny because it’s obviously parodying.

These types of gags work well in Inferno Cop because it’s a 13 episode series that typically runs around three minutes in length. Ninja Slayer From Animation is a 26 episode series with an average length of 12 minutes. The difference in length is very obvious and these gags lose their novelty quickly.

It’s all being done in the name of parody, but there is a point where parody can cross over into being annoying.

I should clarify that I never felt like I was watching the same episode or fight over and over again. It doesn’t feel overly formulaic and there’s different visual gags and enemies throughout.

A static Ninja Slayer fighting against static lions is wholly different than fighting by throwing and catching swords against another static ninja. The fights are unique and enjoyable, but once the gags become predictable, they become annoying.

Even serious moments of character development feel awkward when the show goes back to its “static” look. Inferno Cop is great throughout because it never takes itself seriously. Ninja Slayer absolutely can at times and the visuals contrast with that.

At times the contrast is great and it made me laugh. At other times it just got a bit of an awkward chuckle out. 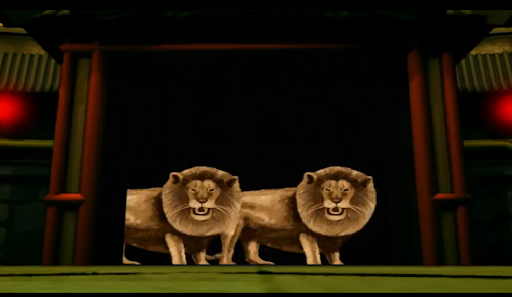 Should You Watch His Personal War of Vengeance?

To be honest, I don’t even know if I’d say that I like it. I doubt I’ll ever watch it again. What I like about the show is offset by what I didn’t enjoy. But the flaws I see in it might not be shared by everyone.

There’s plenty of people that will defend it online, just as there are those who knew it wasn’t for them after a couple of episodes.

Nonetheless, I’d recommend that people give it a shot. It can be streamed for free on Funimation in either the Japanese or English dub (the latter of which does a wonderful job at feeling like a show on Adult Swim). If you prefer physical media then you can find the Blu-ray at Rightstuf.

At the very least you’ll probably have a unique experience watching it. Whether you view it as an anime or a glorified PowerPoint presentation, there’s not much like it.

other James Fujita 4 weeks ago

One Last SSSS.Dynazenon Trailer Before Its Premiere