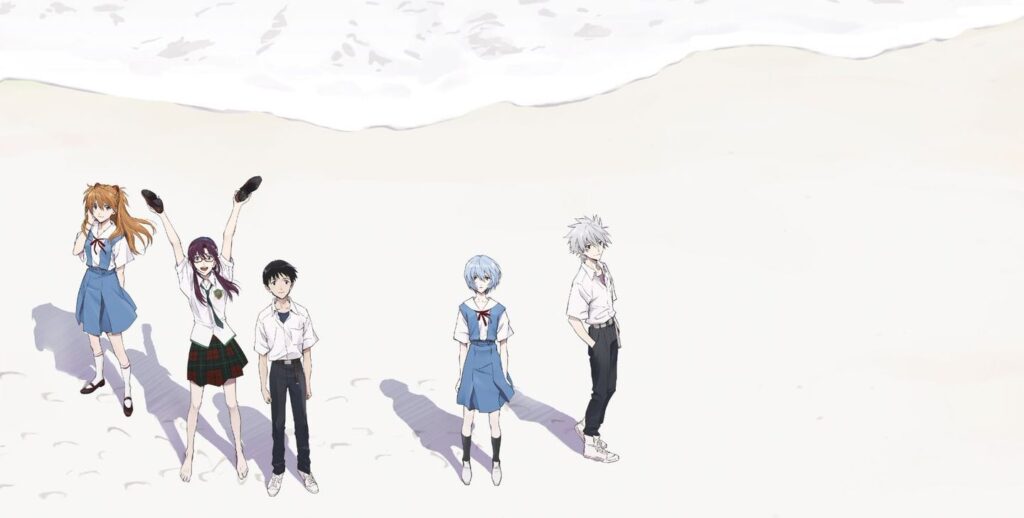 Accepting the New End of Evangelion

Nobody takes anything more personally than Evangelion fans take Evangelion. Anno’s incredibly personal work resulted in fans etching the series into their hearts deeper than any other anime… who knew that would happen!

For more than 25 years now, we’ve all been having the same circular fights about abstract plot points, Hideaki Anno’s intentions, should the Rebuild movies exist or not, and perhaps most notably, what the hell happened in The End Of Evangelion?

Now that Evangelion 3.0 + 1.0 is finally a watchable movie that just might also come out in English this decade, some of these arguments will come to a definitive end; Being essentially a spiritual tomb for many who’ve stewed at their keyboards since the original Rebuild of Evangelion announcement 15 years ago, these final Eva developments will hit hard.

You’ll still be able to wage wars over whether you like Rei, Asuka, or Kaworu best, but being the third and most likely last Evangelion ending, we’ll have to learn to accept their truths.

Neon Genesis Evangelion ended for the first time on 27 March 1996, when budgetary constraints and a lack of sponsorship led a depressed and distraught Hideaki Anno to finish this future piece of permanent human culture with the two most inventive and controversial episodes of animation ever.

Fans have since 180’d on ‘Do you love me’ and ‘Take care of yourself’, recognizing their inherent genius and essentiality to the esoteric and overarching grander Evangelion, but the Japanese otaku of March 1996 hated them.

Most fans tell each other that the death threats Hideaki Anno had been receiving for not spoonfeeding the nerds of yesteryear an easy-to-digest ending led him to manifest the End of Evangelion the following year, the second end of Evangelion. Surely the financial benefits of Evangelion becoming a massive success post-run had something to do with the film’s creation, but those death-threats in part sculpted what shape the movie would take.

We must reiterate that you couldn’t tell from how we all pedestal Neon Genesis Evangelion that those few who actually watched it when it aired failed to appreciate the show ending in a bunch of scribbles, stream of conscious monologues, and animatics.

Armed with a significantly bigger budget while nauseated by fan, financial, and self-pressure, spiritually cel-painting with his own vomit, Anno produced a still personal but artistically heightened work of film-animation you could call, in part, assault against those fans; End Of Evangelion does feature a whole slew of ‘wow nothing like this has ever or will ever be animated again’-type scenes one after another, but surprise-surprise they’re not any more comprehensible than the TV end.

Anno gave the fans the animation they wanted, but was steadfast in giving them neither all the answers nor a happy ending. Instead of Shinji and Asuka walking off hand in hand into the sunset, he forced fans to watch him choke her out on a beach and only after putting them face-to-face with their own masturbatory death-threats in the cushy theater seats. Thus Evangelion ended its second time.

Anno used this precious and intimate work to call the fans out, and to their credit, instead of acting like babies again, they decided to respect Evangelion for all time by constantly throwing money at its never-ending stream of merch and arguing about its minutia for the next 20 years. Sure, fans of any series ‘keep it alive’ in some corny, sentimental way, but despite End of Evangelion re-ending the series, it never really was allowed to die.

It’s all but forgotten now, but there was a time when NGE and EOE existed without the specter of then-future Rebuild films hanging over fans’ collective heads. Before the Evangelion remake tetralogy, fans were begging for more for years on end. While we wholeheartedly embraced The Art of End Of, we couldn’t help both wanting answers and wanting to peak further into Hideaki Anno’s wholly unique brain. We joke about all the Evangelion merchandise on the site, but the reason it never stopped was that fans kept buying it and buying it during that entire decade dry-spell, perhaps if only to keep the dream of More Evangelion alive in themselves. With a decade of constant fan demand, backed up by billions in merch sales, our dreams would finally come true.

However, dreams coming true means Evangelion fans had a whole new set of anxieties to deal with: ‘Oh god there’s going to be more Evangelion’ and ‘How the hell are they going to outdo End of Evangelion.’ Even back in 2007, fans had pondered what the end of their imagery Evangelion 4.0 would be, not realizing they’d have to wait 15 years for Hideaki Anno to drop a film curiously called Evangelion 3.0+1.0 with the subtitle ‘Thrice Upon A Time’ and the advertising tag-line ‘Bye Bye, All Of Evangelion’.

Fans were trading theories around from the outset, and Evangelion 1.11 only having minimal differences to the series on the surface, perhaps played to the fervor’s favor via those minimal differences being more intensely scrutinized than even some religious texts!

With Anno drawing fans’ salivation more directly in Evangelion 2.22 and sailing into completely uncharted territory with Evangelion 3.33, Eva cultists around the world soiled themselves silly with their ideas, chewing on each answer given and digesting them into new questions to regurgitate back into the Eva discourse void.

While the first three films were released in a relatively timely manner, Anno gave his audience no option but to stew with their theories and hopes in what would turn into that nine-year wait for the final piece of the puzzle.

Remember, part of the whole appeal of Rebuild Of Evangelion was that this was to be an idealized Evangelion Anno would’ve made if budgetary and other restrictions didn’t impact the creation of the original. Now to us, that statement, often lauded by fans, isn’t meant to be read as literally as to mean all these story changes and character deviations are what Anno always intended; Rather, the tone and messages of the movies, not to mention the lush animation, are perhaps a closer interpretation to Hideaki Anno’s own ideal Evangelion.

One can, and often does, employ ‘separating the art from the artist’ for any number of reasons, but when said artist straight up uses their own death-threats in that art, it becomes a fool’s errand to try. 25 years had led up to this final end of Evangelion and the only person in the world who could have ever made it was in complete control of the end product this time around. Again, the film itself isn’t Evangelion 4.44 Hideaki or fans imagined 15 years ago, much less the intended end of Neon Genesis Evangelion, but it’s the Anno of today ending it once and for all.

We’ve seen Evangelion 3.0+1.0, and have internalized all of its new brain-shattering revelations and implications. We understand nearly all of you haven’t had the chance yet. Of course we’re not telling you what you’ll have to accept, but we are letting you know you’ll have to accept, whether you like it or not.

Whether you’ll want to acknowledge x, y, and z events as canon or decide the rebuild films don’t matter at all, it doesn’t change what the most important person in all of this thinks. Evangelion 3.0+1.0 is Hideaki Anno’s final statement on everything about his beloved creation. The film relays his final meditations on Shinji, Asuka, Rei, and everything Evangelion ever was. You can hold on to your opinions even after watching the movie, but you can’t change his.

Ultimately, all the hard work and tears produced by the thousands of worldwide internet-dwelling Evangelion scholars for decades mean less than his final word. That doesn’t mean your own personal relationship to Evangelion doesn’t matter, but if you truly love this art and not just the culture surrounding it, honesty to yourself means Anno’s word is law.