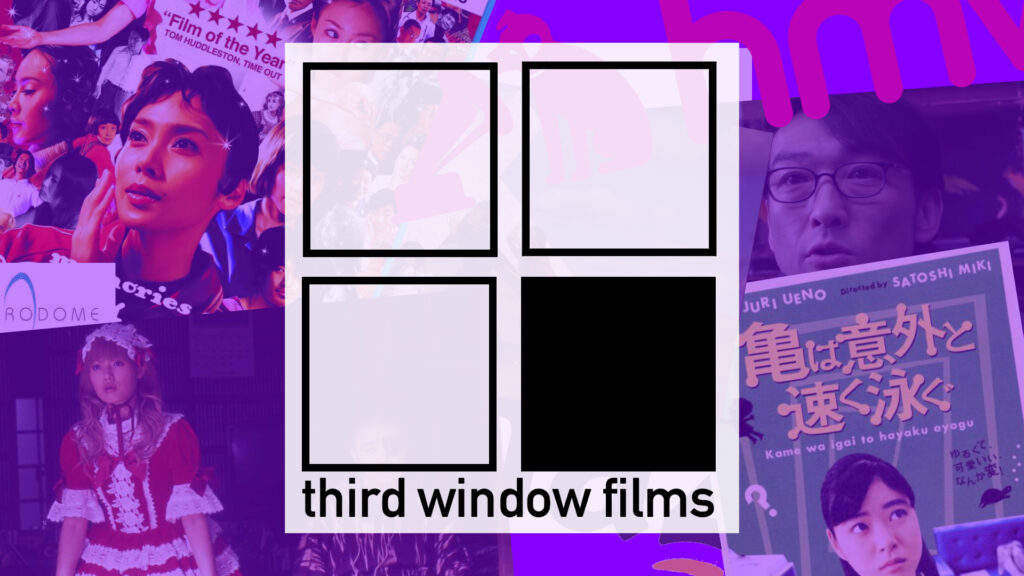 Welcome to another issue of Your Japanese Film Insight. This time, I want to take a step back and discuss how Japanese films have earned their reputation internationally. The reputation of Japanese films outside of the country is determined heavily by the distributors who put in the work to bring these films to countries around the world. Of these, few are as well-known or respected as Third Window Films.

I recently had the chance to interview the founder and CEO of Third Window Films, Adam Torel, where we discussed everything from the company’s origins to their work distributing and shaping the international image of Japanese cinema.

The big question? What does it take to license and distribute Japanese films in the West?

Entertainment distribution is rarely a branded institution. You have your studios famous for producing a particular genre of film (take Disney’s ubiquitous stranglehold over animation for that), and you have the brand of the director behind the camera or the actor in front of it. Rarely do people go to bat for them, with the exception of arthouse distributors such as Criterion, A24, and Fox Searchlight (now the Disney-owned Searchlight Pictures, distributors of the Oscar-winning Nomadland).

It’s a bit different for foreign language movie distribution. Companies handling the distribution of these films often also have to overcome the language barrier on behalf of their audience, acting not just as distributors but curators with the ability to dictate the conversation. By being active curators, a brand taking movies from one country and releasing them in another is suddenly an authoritative voice fighting the corner for that country’s cinematic output.

For decades, that was relegated to releases and rereleases of classic directors like Yasujiro Ozu. For directors such as Ozu, their films are undoubtedly worthy of preservation, but a 1950s director isn’t representative of a modern industry. Outside of the BFI in the late 1990s and early 2000s was Tartan Asia Extreme, a now-defunct international movie distributor that became a poster child for ultraviolent gore-filled horror-style genre films from mostly East Asian countries. Third Window Films, founded and still managed today by CEO Adam Torel, wished to challenge that narrative.

‘It’s more of a passion project of getting more obscure and a variety of more independent films from Asia, nowadays mostly Japan, out to the West,’ noted Adam Torel on the ethos behind Third Window Films as we started our interview from Tokyo over Zoom. ‘The whole point of distribution is to get films to people. I’m trying to help in the way that I find films that I really like and I think have a lot that people would like if they got to see them, and making sure that they get out there to the public.’

Third Window Films is a UK-based distributor of Japanese film, founded to provide a middle ground between the lauded classics of Ozu and the eccentricities of Tartan. Japanese film had a lot more to offer than just these two extremes, yet very little of that was making its way internationally in any legal capacity. Access to Japanese films was certainly easier than it was before, but it was limited, and for every Oldboy, you had a Scary Hair.

Even for a company wanting to disavow this approach to Asian film, founding Third Window Films at a time when Tartan had saturated the market was difficult. We were already a long way from Battle Royale screening in major theaters by this point.

‘I mean, it took a lot of a lot of learning, a lot of losing money and a lot of problems for the first few years, especially with the logistics of being a small company with no connection to places like Amazon or HMV [a large UK entertainment store],’ stated Torel. ‘You can’t just roll up and say “can you sell these DVDs?”, you need to have middlemen, and at the time it was Metrodome.’

This is only compounded when you’re attempting to launch something that was unlike similar Asian film distributors at the time. ‘When I started off, I thought that it might be better or more advantageous to release the type of films that were, I guess, sellable, like action films or horror films, but try to find films that were better examples of that.

‘The first few films that I did were Korean genre films like No Blood, No Tears and Lee Chang-Dong’s film Green Fish, which were more genre titles. I thought that these would help me get going before I could start working on more minor titles. The problem with that is I think people just saw me as maybe another Tartan or another one of those type of companies that were releasing genre action films, and it was at a time that Tartan had just killed market through oversaturation.’

Adam had jumped into the business having worked at Tartan before founding his own company. But at a time when a majority of film purchases were still made not from online Google searches but by impulse buys in stores, it was difficult to convince people to take a chance on any Asian films when they’d been burnt on low-quality films from the likes of Tartan in the past.

Many have assumed that the rise of digital media would be a boom for independent and niche distributors, helping the likes of Third Window Films, particularly during a pandemic, but in our interview he noted this wasn’t the case. This is due to the realities of digital monetization for movies, especially considering that the existence of independent cinemas can do the job of bringing validity (and sales) to certain films in a way that digital isn’t able to provide. In fact, it’s cinematic distribution that helped the company gain legitimacy after a rocky initial few years.

The company’s fortunes took a turn with the release of Memories of Matsuko and Kamikaze Girls, two massively successful films for the company that opened the door for major releases moving forwards. For these movies, it was cinemas, particularly independent ones, that are to thank for building the attention needed for these films to thrive.

‘In the case of the company’s earlier titles, they were mainly for that straight-to-video market. You couldn’t really get a theatrical release for the Korean genre film. But with films like Memories of Matsuko, they were films that got into cinemas. Not many, but still. And they got a lot of very good reviews in places like Time Out and all those big, big magazines at the time! Therefore, that got the word out for them, and it got them into stores and they ended up selling a lot more [as a result].’

It snowballed from there, particularly for Kamikaze Girls. ‘It was picked up by people like Jonathan Ross, who talked about it on the TV show he used to do at the time looking at Japanese culture [Japanorama],’ remarked Torel. This helped to sell the film for TV broadcast too and provided massive profits for the company, while also further expanding the audience to people who wouldn’t tune in otherwise, even on modern streaming services.

Examples like these showcase why independent distributors are vulnerable in a digitally centered post-pandemic environment. Such an environment raises barriers that won’t impact larger distributors but hurt smaller ones that rely on cinematic discovery and physical store curation, while revenues for streaming are skewed based on movie size and scale.

‘There’s now more video-on-demand channels like HBO Max and Disney Plus opening up worldwide, which means that people are focusing more and more of their time on buying subscriptions because they’re at home all the time instead of buying single films,’ noted Torel. ‘It’s making the value of a single film worth even less nowadays. When people consider buying one film for rental for £3, they just don’t do it.’

It became clear during our interview that these issues, alongside increased piracy during COVID, have squeezed the income of distributors such as Third Window Films. Those with more power such as streamers can use that control to extract more money from their agreements, making it even more difficult for independent distributors to turn a profit.

‘Japan doesn’t feel that they’re as affected by COVID, so they’re continuing their lives as usual. They’re charging the same amount for licensing their films as they were before, not realizing that it’s a lot harder nowadays for distributors overseas to distribute films. But they don’t understand that because they deal with Asia and South Korea, where issues aren’t as severe. They wonder, well, our films are in the cinemas, why can’t you put our films in the cinemas?’

As Adam Torel admitted, even trying to take control of the situation by pushing their own older releases through platforms like Amazon Prime via streaming or iTunes hasn’t necessarily helped. In reality, without a self-run streaming service or direct digital sales, physical media is still the primary money-driver for independent distributors such as Third Window Films.

‘I’ve only had like one or two films even recoup the encoding costs,’ admits Torel. ‘I mean, iTunes is expensive to get on there. It’s about £500 just to get onto iTunes. The customer’s maybe only paying £1.99 or something to rent it, and I’m only getting a small amount of that.’

Independent distribution is a tough business, and it isn’t getting any easier.

That brings us to the end of the latest issue of Your Japanese Film Insight. Check out part 2 of our interview with Adam Torel of Third Window Films, where we discuss Third Window Films co-productions like Tezuka’s Barbara and Lowlife Love, the production committee system, behind-the-scenes on One Cut of the Dead‘s phenomenal success outside of Japan and the Japanese film industry more broadly.

As ever, you can find a compiled list of all previous issues over on Letterboxd.

Are there any films you want to see discussed in the future? Contact me directly on Twitter @socialanigirl !

other Eddie Lehecka 4 years ago