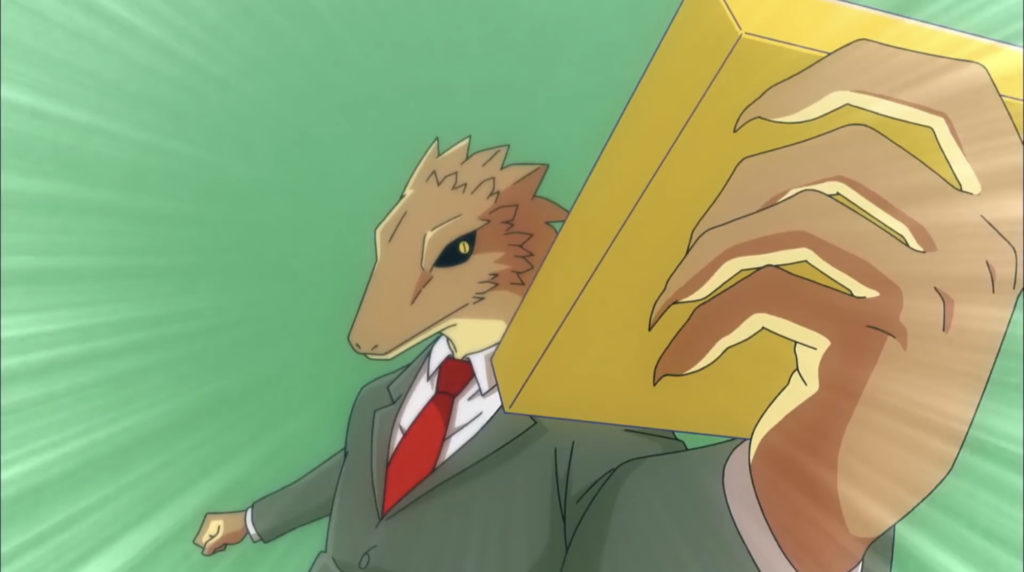 While I’ve become less reluctant about the idea of just walking away from a show when I’m not enjoying it, the three-episode rule of using that first few episodes to make a judgment on whether to continue is still an important barometer I like to use when judging anime. Usually by this point, a show has settled into a routine and you can judge whether a show is right for you. As Africa Salaryman episode 3 reaches this judgment point, I’m happy to report that, although flawed and a mixed bag overall, I can say this show is still worth your time.

During my review for episode 2, I noted how varied in quality that episode ended up feeling, as the episode veered wildly in enjoyment between its two stories. Whereas a hunt for a mysterious animal with an ingenious one-off character is funny and interesting, its other story was painfully by-the-numbers that offered little and left me bored. Also, the story surrounding the animal hunt was enjoyable yet less relatable to daily life, even if the message the segment wants to share that becomes clear near the episode’s conclusion is an interesting bit of food for thought surrounding worker’s rights.

Stuck between relatable-yet-boring and absurd-yet-overtly-obtuse, the show had been enjoyable but was yet to find the right tone. Episode 3 shows that it is possible to offer a route down the middle, as the show is able to tell a down-to-earth that differentiates itself using humor focused around its characters and setting that allows it to stand apart, and for the first time link its two self-contained stories together with a common idea. The episode places a lot of the focus onto Lizard and Toucan, as the Lizard worries about not being able to form a connection with business clients due to being boring, to which Toucan offers to teach them tricks.

So far so normal, yet it shines with Toucan as a joke about them eating yakitori (made from bird, just like them) not only made me laugh but was followed up upon in later moments and in the episode’s other story to hilarious effect. This is helped by the Toucan being by far the most interesting character of our main cast ever since the show began airing. As more side characters cross the paths of our office workers and the situation branches further into the absurd, we enter into the larger-than-life territory where the show has always shined most. A simple plan to go partying instead of hold a flower viewing place quickly escalates when the dead body of another bird that looks just like Toucan that was left with him is mistaken for Toucan himself, with humorous results.

I feel like I’m parroting on about this with each of these reviews, but in spite of overall enjoying this episode, a story mostly surrounding client management and cherry blossom viewings feels like a bit of a waste of its Saharan setting. This isn’t helped when it rather unoriginally refers to the viewing spot as ‘Africa Ueno Park’, after the park of the same name in Japan. While I can note my joy at certain moments, I’m still left wishing it utilized its setting and characters more.

I’m still not sure I can recommend such a show as this to everyone, with its humor and content more mature simply by virtue of its focus on office workers over school children. It’s also a mixed bag in terms of quality as it makes me laugh as many times as a joke or moment fails to engage me. Saying that, when the show shines it revels in the absurd and works within the bounds of the medium to accentuate its humor in a way that I can recommend this to someone in spite of its mixed bag. Episode 3 finds a happy medium between the completely absurd second half to its previous episode and the more generic scenes you’ve seen in many slice of life anime before it to find a niche that it can exist within. Africa Salaryman is far from perfect, but it’s still worth watching in its current form.