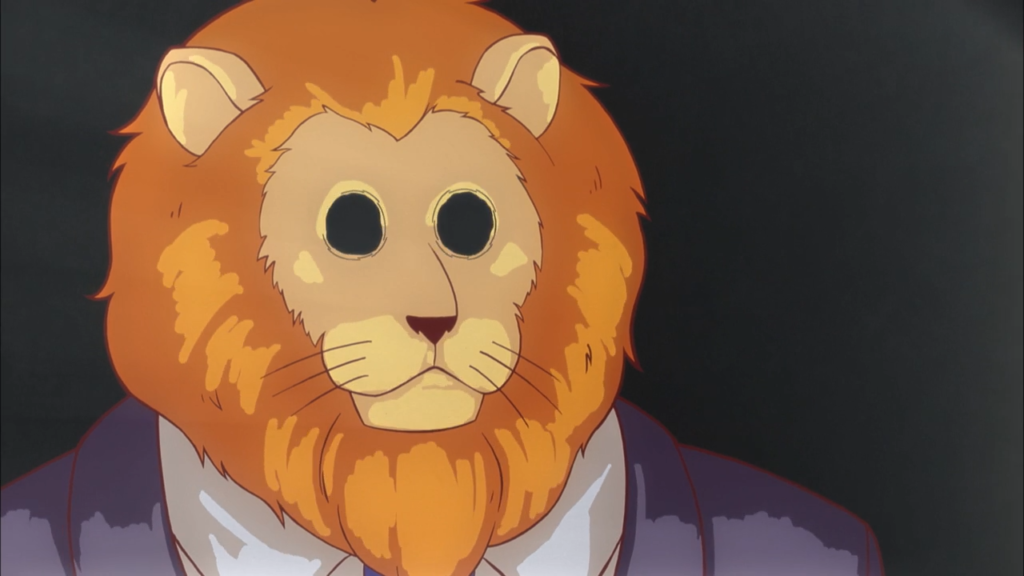 In the most unlikely of circumstances, the not-at-all-story-driven Africa Salaryman has entered a story arc, one which episode 8 promises to at least try and conclude.

To catch everyone up to speed, this office comedy featuring anthropomorphic talking safari animals where episodic quality sways between good and bad like a pendulum recently flew our characters to Hawaii for a working holiday. Last week, for reasons I am still baffled by, Toucan met with his childhood friend and attempted (and failed) to steal the riches hidden underneath Iolani Palace, and now he’s been arrested for this serious crime and is stuck in Hawaii. It’s post-vacation now, so the fallout from the messy criminal proceedings was set to come to the surface this week…

Or so I thought. This is never brought up again. Instead, Windows Vista took too long to update and Lion forgot how to use Microsoft Excel. 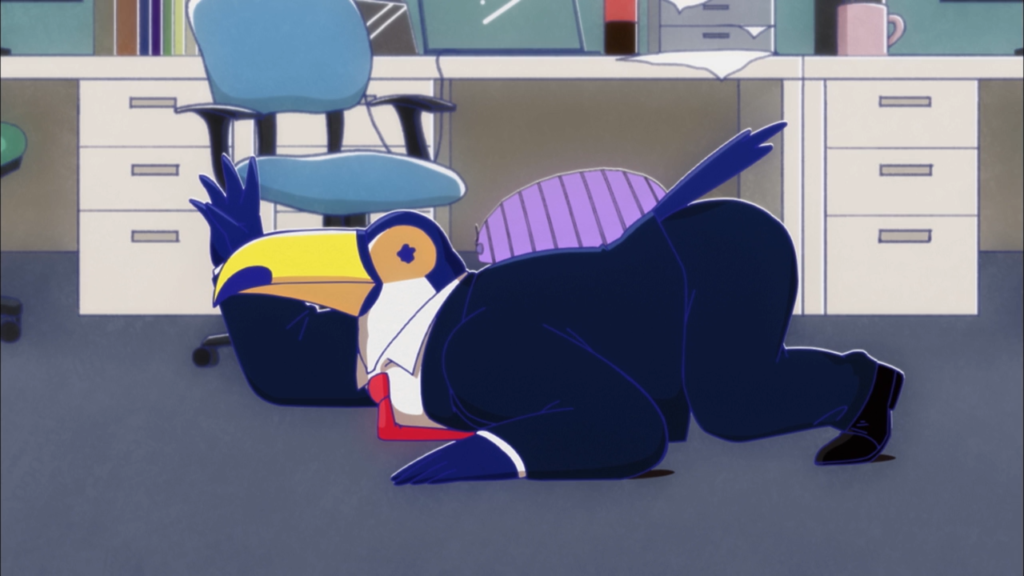 I don’t whether I should be glad that the events of the last two episodes have seemingly been completely erased from the show’s memory. Episode 6’s setup for their travel to Hawaii was admittedly contrived, the plot to become high-value criminals weirdly out of place with potentially long-lasting consequences I perhaps wouldn’t want a satirical comedy to cover when it has no relevance to the topics the series traditionally covers. In saying that, for Africa Salaryman episode 8 to pretend as though nothing ever happened is incredibly jarring, even as someone who couldn’t care less about the consequences in the first place.

With Toucan back at the office as though nothing ever happened, our wage slaves have more pressing matters to attend to in order to satiate the whims of their corporate overlords. Forget a lifetime in prison, Toucan, Lizard, and Lion have to deal with a much more grave issue: the office is a mess! With the mess becoming an issue, it’s time to solve it the only way anything can be solved in the 21st century: technology that does the same thing that humans do but is less effective at doing so. That’s right, the office now has a robotic vacuum cleaner.

I mean, it looks like a bug! It talks! It cleans! It’s perfect! Aside from the cost being taken off of their salary without consent, what could go wrong?

As it turns out, a lot. Toucan gets mistakenly recognized as trash and is chased by the AI of the violent vacuum before Lion’s hunting senses lead to him destroying it. Shame the skit isn’t all that funny. And very short, having lasted no more than a few minutes.

This is actually one of the longest setups of the week, in spite of this. The episode is mostly made up of shorter skits in place of fewer, longer stories that have a journey to go through between their setup and punchline as seen in previous weeks. Each has varying core ideas, yet none of them result in any humorous moments. Another skit this week features Lion using the smoke of the smoking area of the office building to hide a fart. A rather offensive one uses a gorilla for one of the women at a dating mixer Toucan attends as shorthand for them being ugly, leading to a painful sequence as they try and get away from the event by any means necessary. 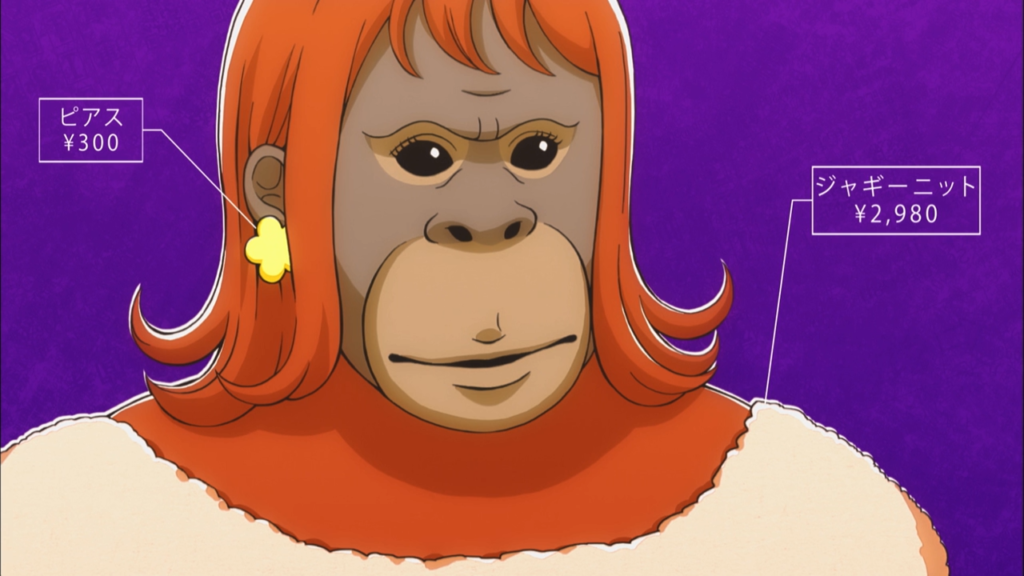 There are more jokes like this just within the first half of the episode, and none of them are all that funny. In fact, while I’ve had complaints about some of the skits within earlier episodes of Africa Salaryman such, with episode 8 it really begins to feel like less would have been more, as the saying goes. I found myself bored, willing for the episode to be over before we even reached halfway.

Alas, the monotony continued for the remainder of the episode.

We have sports day is set up to try and deepen workplace bonds and because its a trend at other high-performing companies. This isn’t taken anywhere. A skit about summer memories has this same issue, as does a story about the pain of sitting still for too long, and the list goes on.

In previous reviews I’ve noted that some skits have felt dragged out and lost their humorous impact over time, an idea never feeling like it deserves to be extended to the 7-8 minute runtime it would receive in order to take up half of an episode. Often the running gag would run out of steam before the conclusion, and you’d be fighting back the urge to skip to the next section more than you were fighting back suppressed laughter. 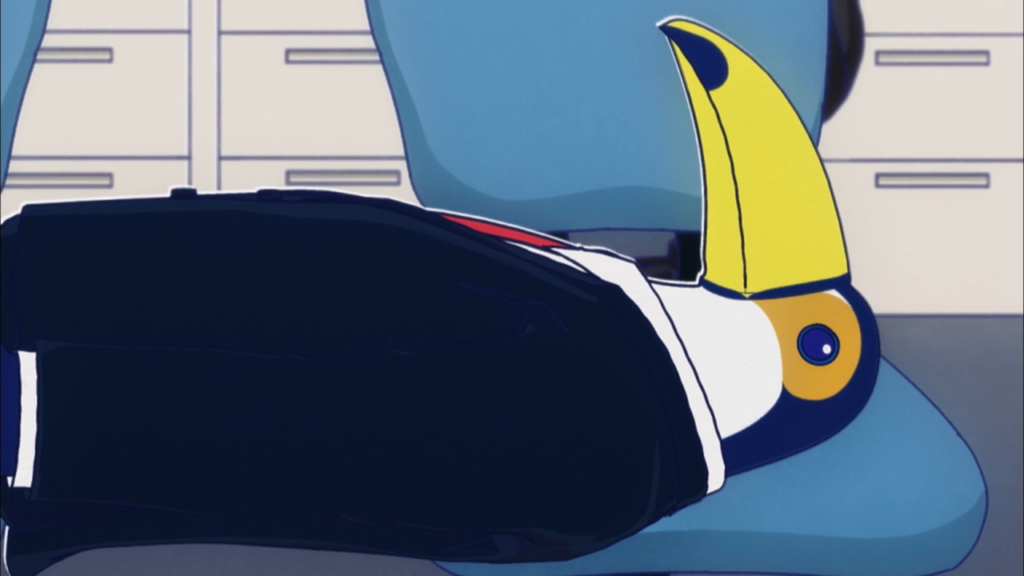 Episode 8 of Africa Salaryman suffers from the opposite problem and, in a sense, this is a much worse solution. Previously, you at least recognized when a joke became stale that there was an interesting initial concept with issues often coming down to pacing and originality. Here, the setup isn’t funny, the punchline is worse, there’s no build-up or reward, and any idea isn’t given the chance to breathe and develop. Worse, it feels like a lack of effort is the biggest culprit more than anything else, a need to phone in an episode of half-baked ideas bunched together in the hope of making up an episode they forgot was supposed to be in the series, rather than an earnest attempt at making the audience laugh. Most of these jokes don’t even feel like they have enough content for even a 4-panel comedy panel, which is perhaps where my biggest issue arises.

While I rarely bring them up when discussing other episodes, mostly because they never have content worth discussing, each episode of Africa Salaryman often has a short joke before and after the opening and ending credits have rolled, and episode 8 is no exception here. The reason I never discuss them is that they often add nothing to the experience of the episode. 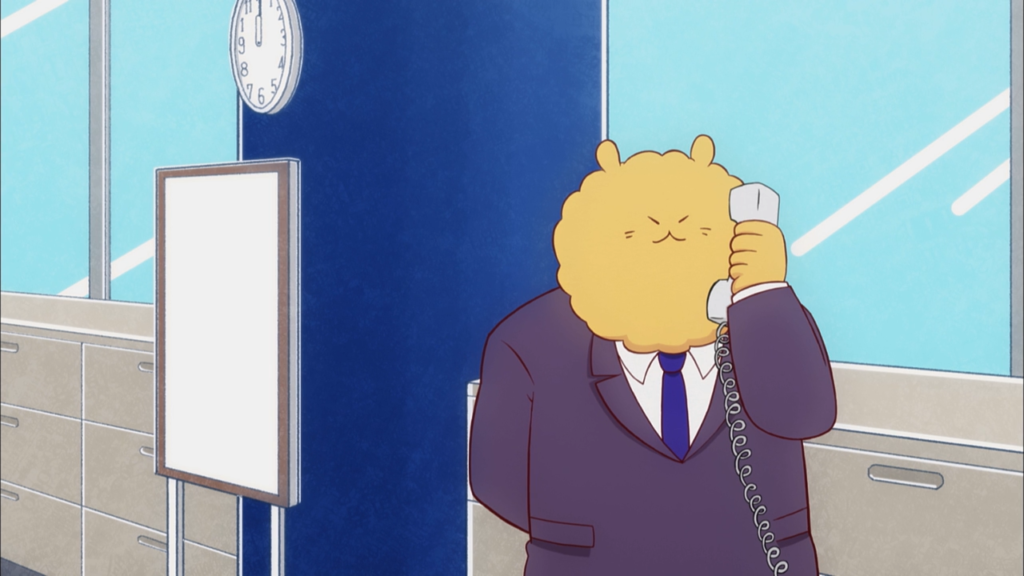 While I can criticize last week’s episode for taking Toucan out-of-character and for its unusual premise, this week was basically these boring, short post-credits skits dragged out for an entire episode. When you do that, what you’re left with is one of the most unsatisfying anime episodes of the entire year to date. Best to give this episode a hard pass.