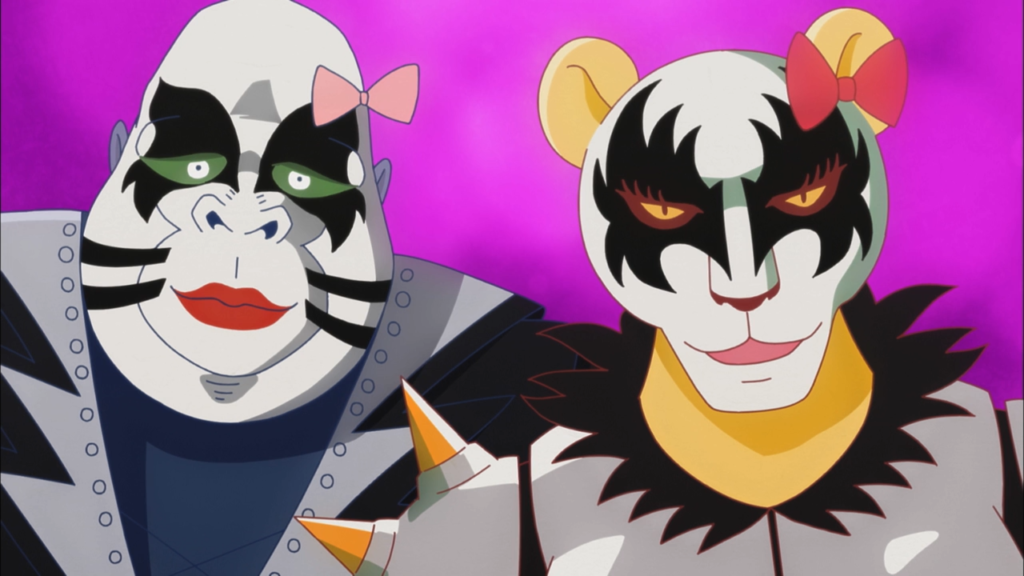 There’s a character I haven’t properly introduced within these weekly reviews as of yet, a character who is thrust into the spotlight for Africa Salaryman episode 9 to mixed results. That character is Honeyguide

Honeyguide was first introduced a few episodes ago within episode 6 during a rather unspectacular sketch involving the character. At the time I assumed we’d never see the character again, yet they’ve gone on to make cameo appearances within the anime ever since. None of these episodes have helped at making the character more likable to the audience, which is why the decision to create a comedy sketch relying on the show’s ability to convince you to feel sympathetic to their plight was an unusual one, to say the least.

Can they pull it off? Not really.

Learning From Your Mistakes? 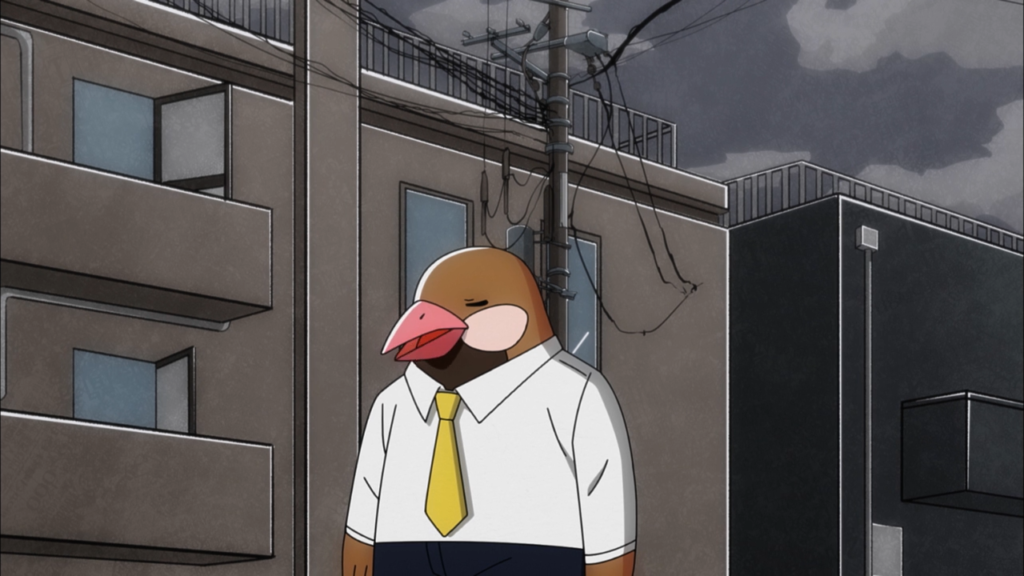 Honeyguide is a sociopath. He’s intensely dislikable, and he certainly isn’t a character you hold any modicum of respect for when all he has done is laugh at other people’s displeasure. Even Toucan, for all he acts like a goofball in many respects, is a loveable goofball in spite of his flaws, making them a character you can root for most of the time in spite of his at-times questionable actions. While these feelings for Toucan come about mostly due to their regular appearances within the show and their overall friendlier demeanor, Honeyguide acts a polar opposite to Toucan in almost every respect. Because of this as a viewer, you’re left feeling resentful as their cruel and callous actions impact the lives of those around him, which is what makes the decision to center a story on this character something that feels at odds with the rest of the anime from a tonal standpoint.

In a workplace environment, solidarity with your coworkers is necessary in order to get along with them and to fight against workplace injustice. Honeyguide revels in workplace disorder and actively makes the lives of his coworkers harder, which is the reason why his character is so dislikable and not easily redeemed, even in a relatively low-stakes anime such as this one. This first skit of the episode relies on evoking a feeling of sympathy for the character as they try and avoid falling into debt after repeated workplace issues have docked their pay to the point they’re struggling to scrape by.

As an audience the humor of the skit relies on us feeling sympathy for his lack of money, regret for his decision to spend his remaining money on slot machines before feeling anger at his lies surrounding the reasons he got into debt to gain the help of a loan shark and his subsequent attempts to fix the situation. The mood swing from moment to moment is where the comedy of the story is supposed to lie. 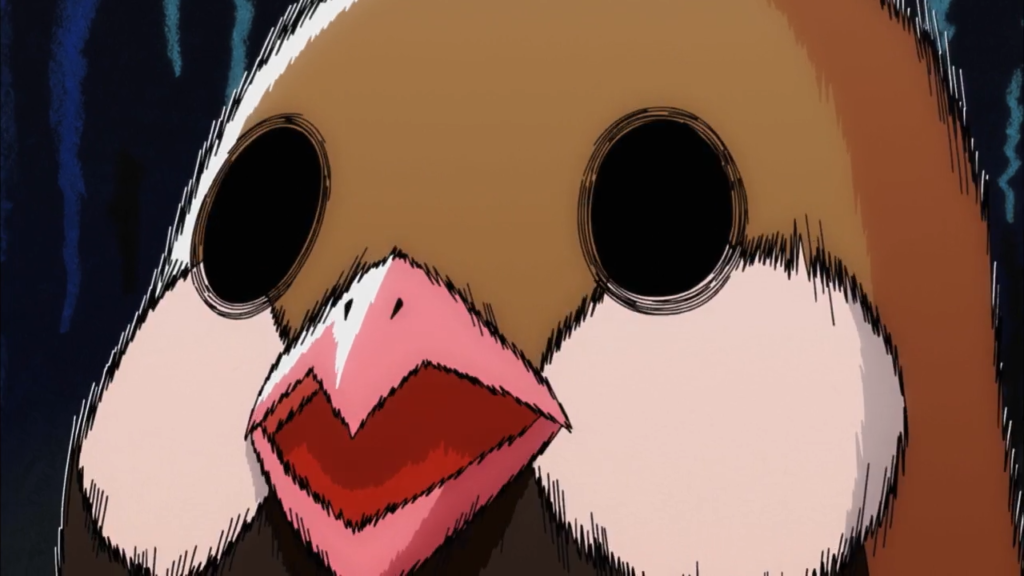 The issue with Africa Salaryman episode 9 is that those previous events steel us to Honeyguide’s contempt of others to the point we are unable to feel anything when faced with such hardships. That’s karma for you, I guess. The result is a feeling of disengagement towards the events going on around the character, meaning the humor falls flat and the sudden tonal shift to a bomb plot that attempts to kill the boss in order to redeem money on an insurance plan created in their name baffling in spite of being the logical endgame for a sociopath such as them.

Perhaps most frustrating is that there are signs in this story that, with a bit of tweaking, could have made this much more engaging. Having almost any other character leading the story would make us more sympathetic despite the sudden raising of the stakes to a bomb plot feeling out of place and jarring within the context of the episode. A separate story altogether that used the show’s comedy to tackle power harassment, an exaggerated-yet-not-entirely-without-merit claim made by Honeyguide to elicit sympathy from the loan shark within this skit, could also have taken place with a different lead who didn’t wilfully use the power of his higher-ups as a weapon to wield against his co-workers. Without that, the idea just doesn’t work, and the result is a poorly-implemented story that fails to entertain. 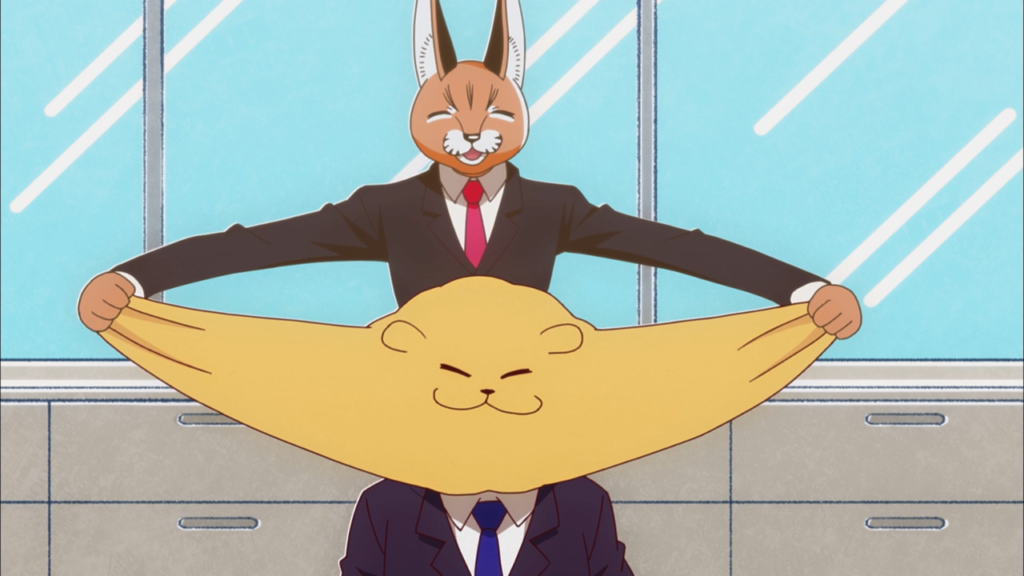 While the second half of Africa Salaryman episode 9 is the better story, it still isn’t something I would recommend to others. While the first half failed because its story required sympathy for a character who deserved none and failed to deliver on its key ideas in order to create a humorous and engaging skit, this half of the episode suffers from a much simpler issue: it all feels a little boring.

This story sees the happily married Lion dragged along to a speed dating event by the unmarried HR employee Caracal. While Lion never wanted to attend in the first place and was forced along by the unrelenting persistence of Caracal, they had initially been very excited for the event, before it turned out that the whole thing had been a scam.

Speed dating has a lot of potential for comedy, and even though it’s not an original idea to make a comedy sketch on the phenomenon, with the set up the show provides with its animal cast it could play into each animal’s characteristics in order to create an interesting story from it. Instead, I was left relieved once the ending theme begun to play since for all the potential the story had for comedy, I found myself stone-faced and bored throughout.

Perhaps it’s telling that the funniest point of the entire episode came during the short post-credits scene that followed on from the events of this segment as the two schoolgirl characters, Gorilla and Lioness, Lion’s daughter, attend the event despite being underage by making themselves look older through applying Kiss-inspired makeup. It isn’t funny, but it’s better than what came before it, and the reference did at least wring out of me the episode’s first smile, even if it came during the show’s dying moments.

Africa Salaryman Episode 9: Better Than Nothing 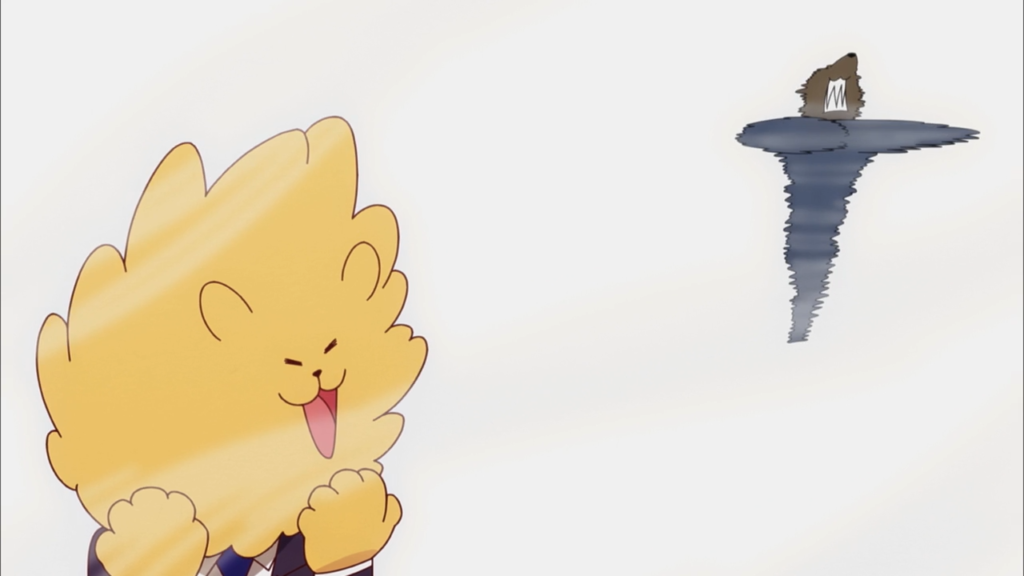 Alas, I come out of Africa Salaryman episode 9 once again disappointed by its content. Each story had the potential to be something more, especially the sketch in the first half of the episode, yet neither could deliver an engaging and humorous story I felt was worth my time.

After a bit of turbulence the series has once again returned to a status quo, yet one infinitely inferior to the one I noted in early episodes after highlights such as episode 1 and episode 3. While I did resign myself to accepting this was an anime which would fail to reach its potential, and although this is certainly an improvement on last week’s low point for the show to date, I have to be honest, I was expecting more than what I ended up receiving.