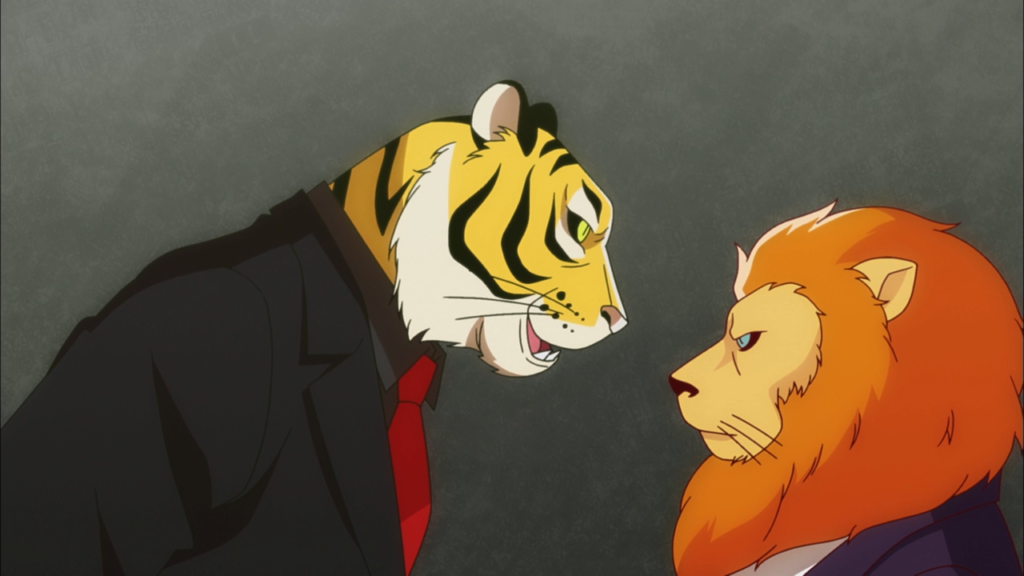 Where did it all go wrong for the once-intriguing comedy slice of anime Africa Salaryman, which recently concluded its 1-season run with the airing of its 12th and final episode?

In theory, before the season began, there was a lot suggesting the show could be a success. First of all, you had its premise and a set-up which, while not entirely unique, held the potential for hilarious bouts of comedy as the various safari animals were thrown into everyday situations. Through portraying relatable issues with an animal spin which exaggerated the situation and also took advantage of each animal’s unique characteristics, the potential was there. Not only that, its main cast all have famous actors portraying them, ones who themselves have featured in their own comedies both in animated and live-action formats.

Had I known the results would be so disappointing, however, I certainly would not have selected this anime as my wildcard choice for anime to cover these past few months.

Although the 12th and (thankfully) last episode of the anime premiered over the weekend, rather than specifically focus on the episode in isolation, I would prefer to look at Africa Salaryman as a whole, post-mortem style. Where did it all go wrong for this prospective comedy anime? 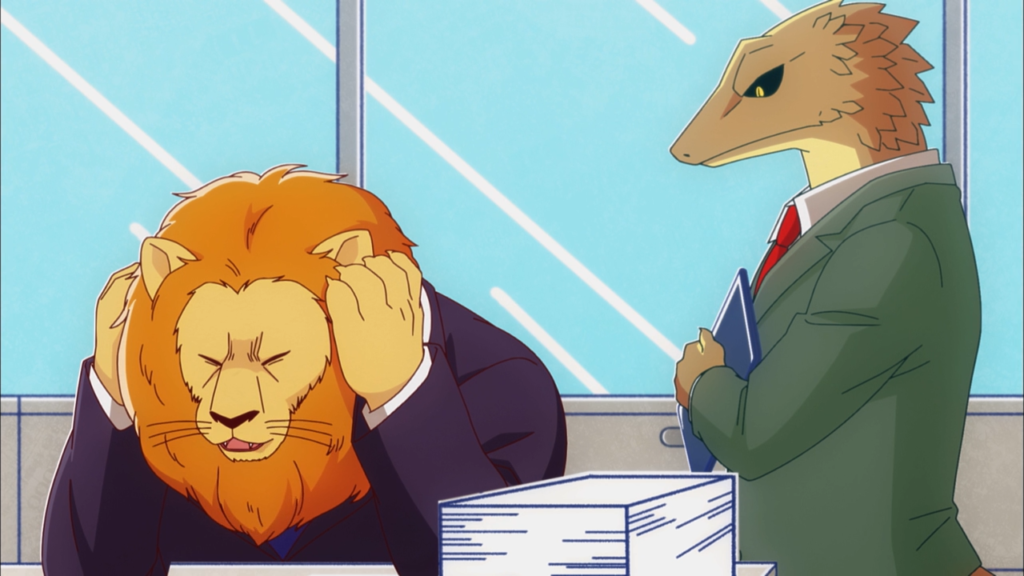 The first issue the Africa Salaryman had was with its pacing. This is the point where most unsuccessful comedy anime fall apart because they’re unable to time their jokes effectively within the context of the show and at the right moment to get any reaction from the audience. You can have talented voice actors with a knack for comedy (the anime’s choice to use big-name Japanese talents showed they had this part down from the start), but without good writing and pacing it will all, very quickly, fall apart.

Often this meant that the anime failed to reach its full potential. You could see this in a few different places, a few sparks of brilliance among the deadwood, where things just… worked. Episode 2 subverted expectations during its skit involving the search for a rare animal who turns out to be a colleague who had run from work. It commented on the Japanese work culture and had a set-up that complemented its characters and the anime’s overall premise, and had me laughing endlessly; even now, this skit is perhaps my favorite of the entire show.

However, multiple times throughout the series, the issue of pacing and writing was too hard to overcome. I specifically raised this exact problem as the episode was plagued with multiple skits that, though they started well and were even successful at rising a smile out of me, overstayed their outcome and were boring by the end, perhaps the biggest sin a comedy can commit.

With the dentist skit in episode 4, while nothing particularly groundbreaking, the idea of having Lion scared of the dentist despite his fearsome appearance and other things about the episode were a clever set-up for comedy that it began to use effectively to make me laugh. That skit outstayed its welcome, and it was far from alone here. I raise these episodes specifically because of what I wrote at the time, but if I wasn’t worried about sounding like a broken record I could have made this point about Africa Salaryman on a near-weekly basis. 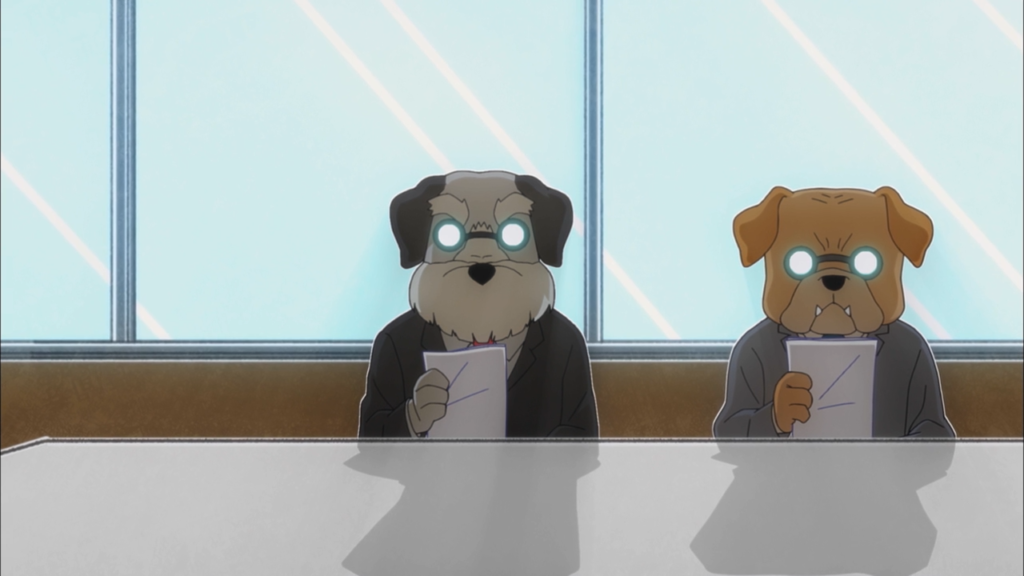 When using Saharan animals in a workplace environment, there is potential for natural strangeness to drive the comedy as these animals interact with ‘human’ situations and tackle them with the traits of the species they’re a part of. You’re mixing predators and prey into the same environment thanks to this premise, too! The possibilities are endless! Unfortunately, for an anime with more opportunities to embrace unique ideas for its comedy thanks to its premise, it often falls into the worst possible habits a comedy anime could fall into.

Repetition, come the later parts of the series, was a major problem for the show. Everything from small ideas to full skits was copied wholesale from previous episodes of the series. At times, the jokes being repeated were not particularly funny in the first place. Just last week, for example, there were jokes being made in one skit that were later being repeated in a different skit within the very same episode.

Africa Salaryman often repeated the same jokes to the point of groan-inducing insanity, and when it wasn’t being repetitive it was intentionally trying to be eccentric in a way that was out-of-place. The Hawaii episode (episode 7) still stands out the most here, with the crazy left-turn the series took as it shifted from slice of life comedy to poorly-planned heist of an abandoned royal building with added bomb-making still filling me with shock even now. It didn’t really work within the context and it doesn’t fit within the anime’s premise either.

As the anime went on, this became a much larger problem as it leaned much harder into eccentricity as a way to cover for the creators running out of ideas to naturally evolve its premise more than they already had. Unfortunately for them, it didn’t work. 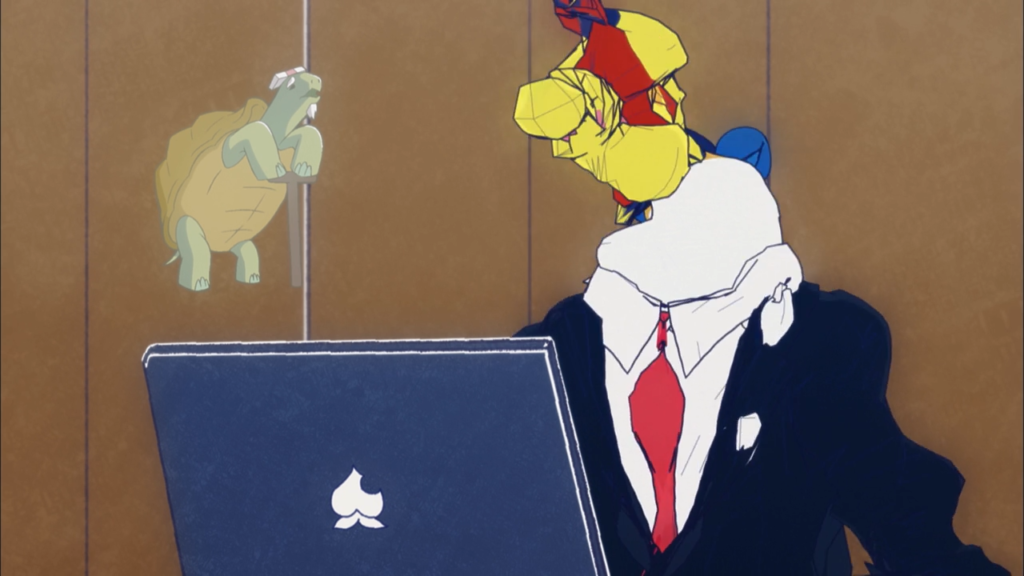 Animation in a comedy anime is rarely its strong point, and it can feel harsh to complain about it considering this point. However, early episodes of the anime took advantage of the clearly-rough animation style the anime was going for (a result of poor deadlines and experience with CG animation on the surface, though without insight into the production it’s difficult to tell). The rough animation would be contrasted with points of 2D animation and reality-bending conceptual shifts to accentuate the jokes it was telling.

This was pulled off to great effect in Africa Salaryman episode 1 and continued to have moderate success in the opening few episodes which followed. Not just having the ability but the willingness to jump between opposing animation styles whenever it became necessary was a crutch to lean on when a joke didn’t land, admittedly, but it was effective. These moments would often be the most visually impressive moments of the series too.

This soon fell by the wayside. As time went on these moments became fewer and further between, and often relied on the same timing and animation styles every time it happened, unlike the Warhol-inspired or rough jump cuts in the opening episode. It felt lazy and had the opposite effect it once had, bringing down the comedy and series as a whole as time went on.

The very static nature of many moments of the show outside of this didn’t help either, as it betrayed the excitement in the voices and that was supposedly apparent in the situation our characters were facing. 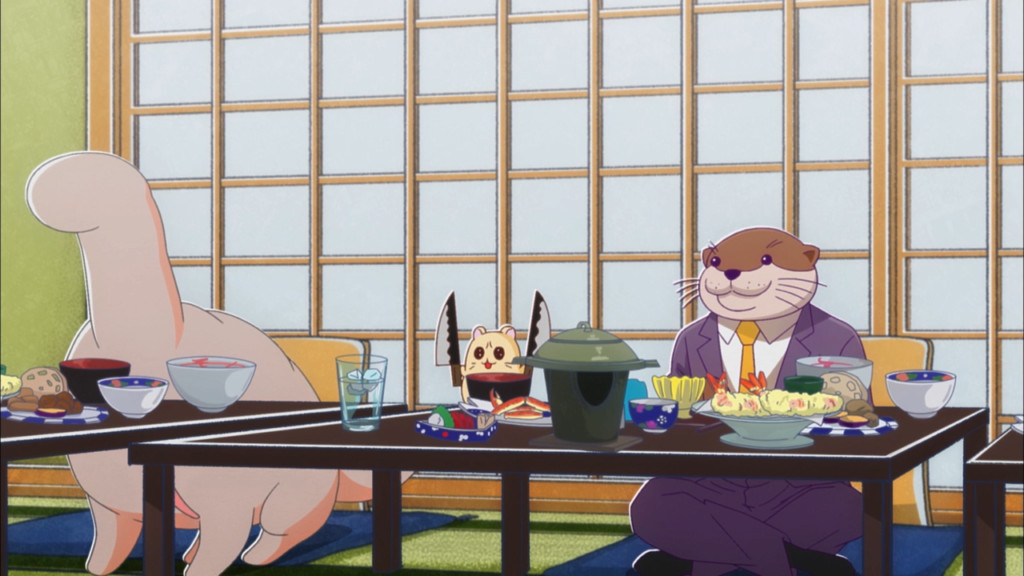 If I’m honest, I could go on for much longer about the issues with Africa Salaryman, yet I feel little need to. There are moments where the animation, voice acting, characters, tone and setting all come together perfectly, and these moments serve to be the best moments of the entire series. Unfortunately, the final episode, which aired over the weekend, suffered from the same issues I cited here, and these moments of clarity were too few and far between to leave much of an impression except for a longing of what could have been.

It’s a shame if I’m honest. I had little idea what to expect when I started watching this anime back in October, however, I saw potential in what it had the potential to be all the same. It’s a shame it was unable to come even close to this, and I, unfortunately, can’t recommend this anime to anyone because of that. One or two positive skits (which could be viewed in isolation outside of the rest of the series before moving on) don’t excuse the boredom I felt for the rest of the show’s runtime.