Aggretsuko Captures 9-to-5 Office Blues Like No Other Anime 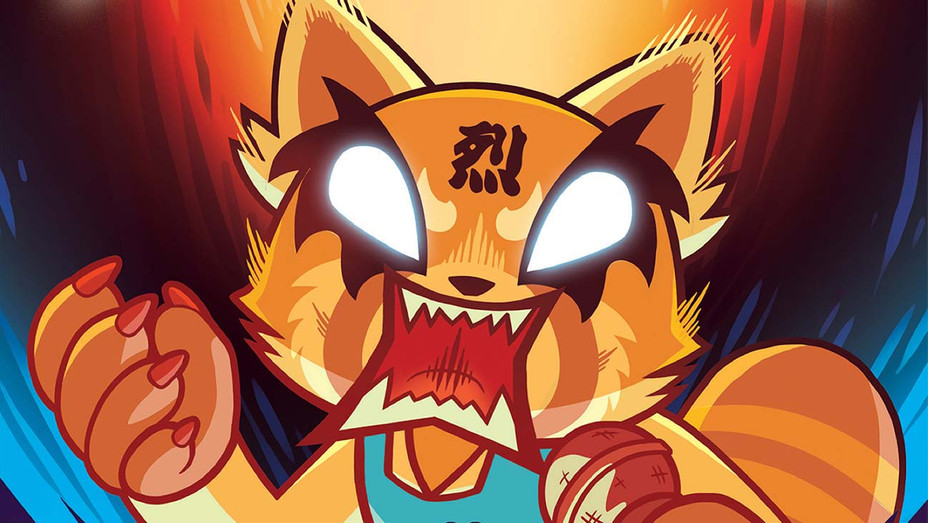 No matter how much you initially like your job, there will inevitably come that one morning where you are rudely awoken by your alarm clock, as you think to yourself, ‘Oh God, not this again.’ It is with this that you finally understand. Congrats! Your dream job is actually your worst nightmare.

You are there, day in, day out, performing the same menial chores, listening to the same boring water cooler conversations. As you sit dead-eyed in your cubicle, hurriedly organizing the papers needed for today’s two o’ clock meeting in a mad scramble, here comes Joseph from sales once again rushing to your side to slack off to tell you that lame story of how he met his current girlfriend at that one Van Halen reunion concert. For the millionth time. This is your reality.

And this is what Aggretsuko is in a nutshell. Don’t be deceived by the bright colors and fluffy animal characters. There is no fluff about the joys of being stuffed in a cubicle with your other co-workers, extolling the virtues of teamwork and whistling while you work.

As so many others will tell you, this is a cartoon for adults. Just not in the same way South Park or Panty & Stocking are. Despite being a show occupied by talking animals, Aggretsuko is a surprisingly mature look in how it humorously satirizes the workplace. 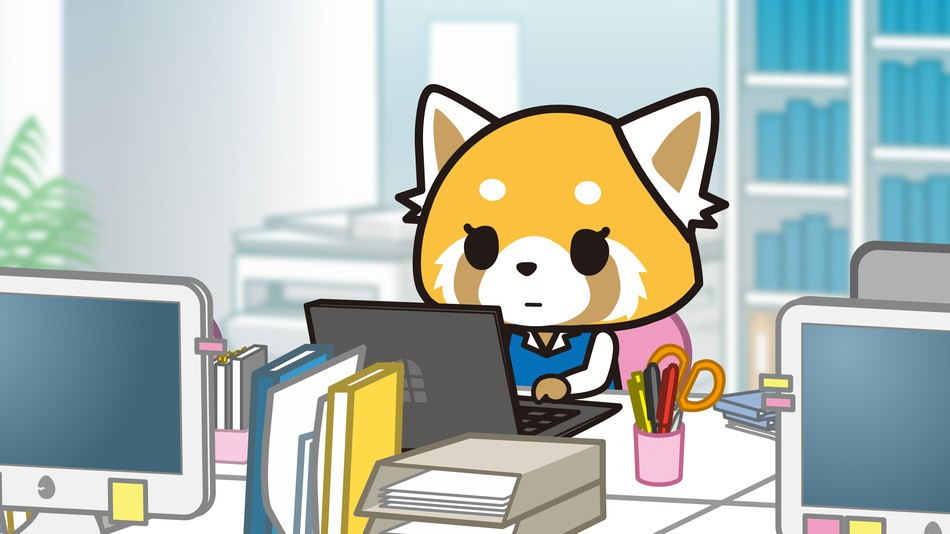 You would think that with the hard anti-corporate stance that it takes, Aggretsuko would have been made by Slavoj Žižek. But lo and behold, it was made by the capitalist entity responsible for Hello Kitty: the Sanrio Company.

The Sanrio company first launched Hello Kitty in 1974. When it arrived in America just two years later, it would become an international phenomenon. This would prompt Sanrio to constantly create and add new characters into its line-up, which includes My Melody, Unico, and of course, Aggretsuko.

Initially called Aggressive Retsuko, the show started out as a series of shorts featured on Tokyo Broadcasting Station’s Ō-sama no Bruranchi Saturday morning program in April 2016. These shorts were directed by Rareko, the man behind the Yawaraka Sensha online shorts, which ran from 2005 to 2011. Looking at the Yawaraka Sensha shorts today, it’s easy to see how its minimalist style of animation carried over into Aggretsuko.

Our twenty-something red panda heroine Retsuko is someone who came into this job with overflowing optimism. That this was going to be the start of a long and rewarding career, filled with joy, adventure, and friendship. And I wish I could tell you that it was, but sadly, the workplace is no cozy little New Game slice-of-life story.

Cut to a few years later. Having been robbed of her spirit by her Kafkaesque pit of Hell, Retsuko is now a shell of her former self. She is teaming with frustration and hates everything about her boring, stale, dead-end, lifeless, adult-daycare of a job. She hates her morning commute. She hates the mountains of work she’s given. She hates her arrogant pig of a boss. And deep down, she probably hates herself.

Eventually, when it’s finally time to punch out and leave the workplace, a drained and bitter Retsuko stumbles down the street to her local karaoke bar. It is there that she is able to let out her bottled-up frustrations through the harsh screams and tritonic guitar riffs that only heavy metal karaoke could provide. 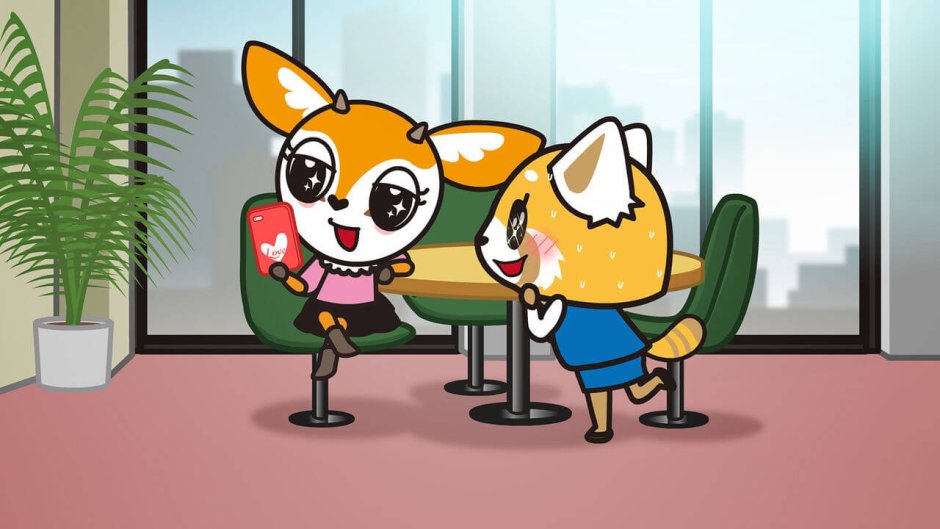 Many of Retsuko’s co-workers come dressed up in proper business attire, complete with suits, ties, expensive watches, shiny shoes, whatever needed to look the part. But they come with so many idiosyncrasies that they may as well come in wearing clown shoes and make-up. I’m just saying: if you’re gonna be part of a three-ring circus act, at least look the part.

I say that sardonically, because the characters inhabiting Retsuko’s office each have a charm to their personalities, even if it all comes across as a bit dysfunctional.

She might look cute on the outside, but one look into soul-piercing eyes and you’ll notice something more sinister underneath it all. Fenneko is reserved and stern, but also screechingly caustic, brazenly brash, and impeccably matter-of-fact.

She can detect every social cue, verbal and non-verbal alike, with such accuracy that you’d think she was gazing into your soul. Which she’s not, but she’s definitely gazing at something else: her co-workers’ social media, making her the office stalker.

Haida is not the stereotypical ‘laughing’ hyena. Even though he likes to don a bass guitar and punk rock gear at night, by day, the man is the farthest thing from a vicious hyena. Or Sid Vicious, for that matter.

At the workplace, Haida is a high-strung, giant nerd of a co-worker whose day usually consists of a series of awkward events. He’s also a nervous, hopeless romantic who has trouble expressing his feelings for Retsuko. The relationship between Haida and Retsuko becomes one of the show’s highlights, to the point where it’s been compared to the Jim and Pam relationship from The Office.

Retsuko’s boss, and a stereotypical one at that. He’s a procrastinator who lets everyone else do the heavy lifting, boorishly rude and inconsiderate to his underlings, and does what he can to make Retsuko’s life Hell. And of course being the antagonist of the series, he’d be a pig. After all, what better way to caricaturize your corporate overlord?

Anai doesn’t arrive on the scene until season two. When he’s first introduced, he has the aura of a young, polite man, if only a teeny bit inexperienced at the job. But on the inside he’s a terrified and panicky child who has trouble transitioning into adulthood.

You’d feel a bit sorry for him if he wasn’t such a psychopath in the process–he constantly sends angry emails to his co-workers who he feels are harassing him, and records conversations with them as if he’s a mole in some sting. Worst of all, he hates being given advice, is ultra-paranoid of his co-workers, and freaks out at even the tiniest little slip-ups.

What’s Next for Aggretsuko?

As of right now, there are two seasons and a Christmas special for Aggretsuko, both conveniently on Netflix. The second season was announced shortly after the first season came out, although the world would have to wait for another year before its release.

The Christmas special, We Wish You A Metal Christmas, would be sandwiched in between, with a release of December 20, 2018. The second season was finally released in June 2019, and the third season was announced just two months later in August. No official date for the third season has since been given.

Aggretsuko is Coming Back for a Third Season

Netflix Original Anime ‘Aggretsuko’ is Getting a Holiday Special