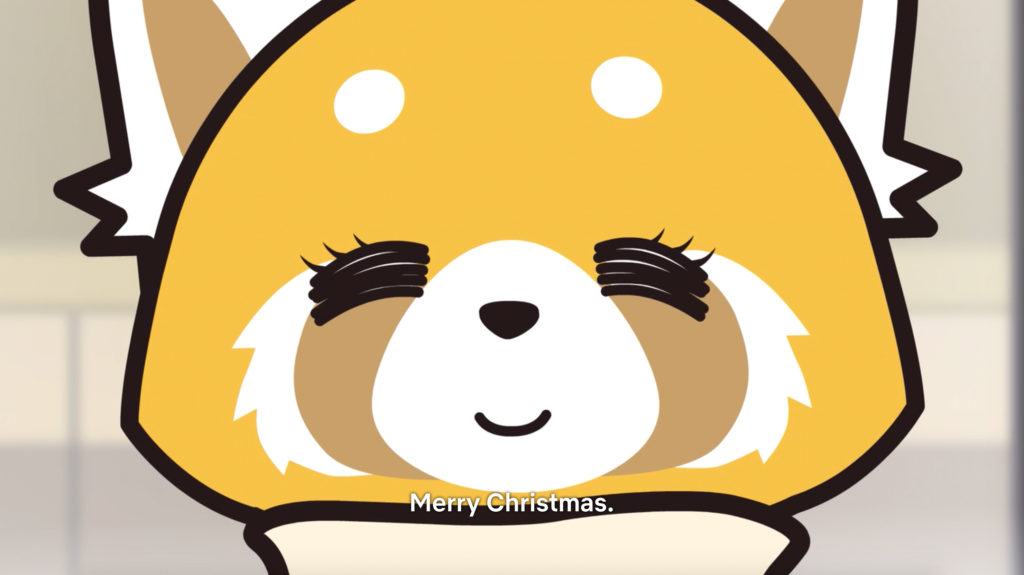 It’s safe to say that besides the ever popular Gudetama, Aggretsuko has been the biggest breakout character from Sanrio in recent years. The way her typical office worker facade strips away in times of stress to a growling, metal singing maniac quickly took the internet by storm when she was first debuted in 2015. After a series of short segments aired on TBS in Japan, it didn’t take long for an animated series detailing her daily life to get picked up, and like the character itself, became a fast favorite when it began streaming on Netflix worldwide earlier in 2018. Just as quickly, a holiday special was announced and released in time for Christmas the same year. Acting as a bridge between the first season and second season of the show, this Christmas special continues the story of Retsuko’s daily life only this time centered around the holiday season. And what better day to talk about the episode than on Christmas itself?

Before I get into my thoughts about the episode itself, it’s important to mention the difference between Christmas in Japan and the US for the context of the episode. It can be lost on viewers who aren’t well-versed in the culture that the show is specifically a takedown of daily life as a member of the workforce in Japan. While there are definitely parallels to working anywhere in the world, there are a lot of Japan-specific cultural jabs that the series pokes fun of and this episode is no different. Where Christmas in most parts of the world is a holiday focused on family, friends, and religion (depending on your own personal beliefs), in Japan (Tokyo especially) it’s absolutely a holiday for couples and that’s the primary plot point of this particular holiday special.

The episode opens with the continuation of a scene from the final episode of season one, with Haida in the hospital confessing his feelings for her. This scene is shown to be replaying in Haida’s head as he contemplates how to ask her to spend Christmas Eve with him, leading to him roping Fenneko into his plan. While most synopses focus primarily on her obsession with Instagram in the episode (where it’s revealed that Tsunoda is coaching her, and Fenneko having serious concerns about it), Haida’s story plays just as big of a role in the episode as Retsuko herself. Throughout the episode, both characters are shown regretting their inability to make plans for the special evening and finding themselves in less than ideal situations as a result. 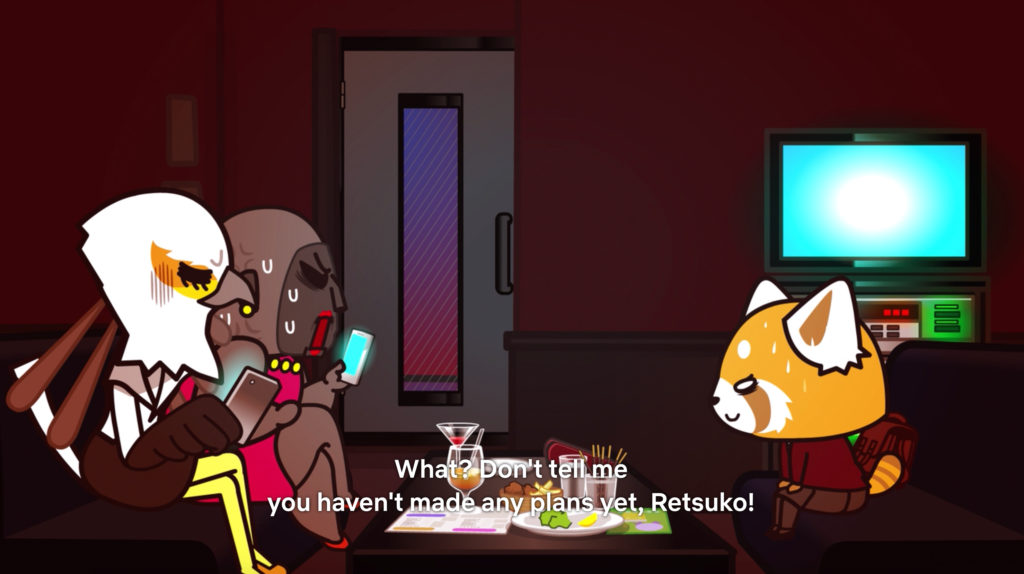 The Instragram portion of the story is where this failure to achieve perceived happiness comes into play, with Retsuko being so worried about her amount of likes on the platform that she ends up forgetting to make plans and gets roped into working late once again by Director Ton. This along with Tsunoda’s “perfect” Christmas Eve post sets her off into her typical rage, and after jumping out of the window of their office she makes her way to somehow create her own perfect post using tricks taught to her by Tsunoda. Her tricks end up being seen by Fenneko & Haida, which causes him to fall into a well of self-pity while Fenneko sees right through the ruse. This causes Haida to run off out of concern and search for Retsuko but the next time we see her, she’s in the company of Director Gori & Ms. Washimi after both of their Christmas Eve dates end in tragedy. The trio takes in a meal at a standing soba bar, much to Retsuko’s dismay, and then resolves itself in the kind of heartwarming way you would expect from a holiday special while also showing that the focus on social media can lead to some pretty unfortunate situations (as shown in Tsunoda’s case).

At its core, the episode plays out very similarly to other episodes of the show, which in itself isn’t a bad thing. The universal relatability of her plight is the kind of thing that makes the 22 minute show a very pleasing and easy watch for viewers. The thing that makes it stand out overall though is how the story all comes together in the end. It still has plenty of series-typical funny moments and does what it does best in portraying everyday life in an amusing way (the Instagram story element is sadly all too relatable itself). Ultimately though, the episode ends up being so heartwarming at the end that the title “We Wish You A Metal Christmas” feels just a bit misleading. Any way you slice it, this episode is what I would call perfect to add into your holiday special rotation this year and if you’re already a fan of Retsuko’s misadventures it’s absolutely a must watch.

Aggretsuko: We Wish You A Metal Christmas is available for streaming via Netflix.