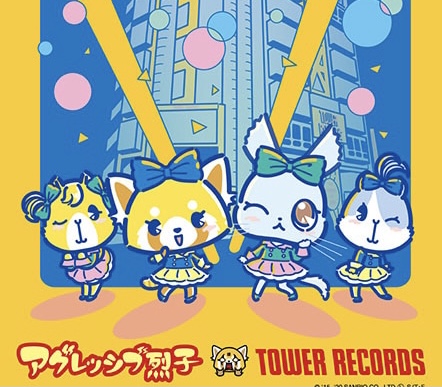 Aggretsuko Season 3 has launched on Netflix worldwide onto the screens of excited fans both inside and outside of Japan. The Sanrio character became an unlikely worldwide success when its first season launched on the streaming service and that popularity has held strong ever since. The new season has a strong musical focus beyond Aggretsuko’s love of metal as she finds herself involved with a small-scale idol group known as the OTM Girls. With the musical leanings of this newest season, perhaps its no surprise that the launch of Aggretsuko season 3 has coincided with a new line of Tower Records collaborative merchandise.

This merchandise features Aggretsuko and the characters in OTM Girls in both metal and idol attire as featured in the latest season. The main poster promoting the campaign shows Aggretsuko and the girls in idol gear and this same art can be found on pin badges, keychains, stickers, towels, clear files, eco bags and pass holders. It can also be found on a rather nice t-shirt design, complete with Tower Records Shibuya in the background. A more metal Aggretsuko fans may be more accustomed too can be found on a range of similar variations to this merchandise like the pin badges and key chains, while this design, complete with Aggretsuko smashing a Tower Records-branded guitar, can be found on a flask and a black t-shirt.

With the prominence of Tower Records Shibuya in the art of this promotion it should be no surprise that you will be able to purchase this merchandise in-store at the iconic flagship store, while a selection of these items will also be available at select other Tower Records stores across Tokyo and across Japan. Otherwise, all of these items can be purchased online on the Tower Records official online store. Items will go on sale on September 2nd, but online pre-orders can be made now.

Aggretsuko Captures 9-to-5 Office Blues Like No Other Anime