Agravity Boys Chapter 50: Ending as It Meant to Go On – Jump Time 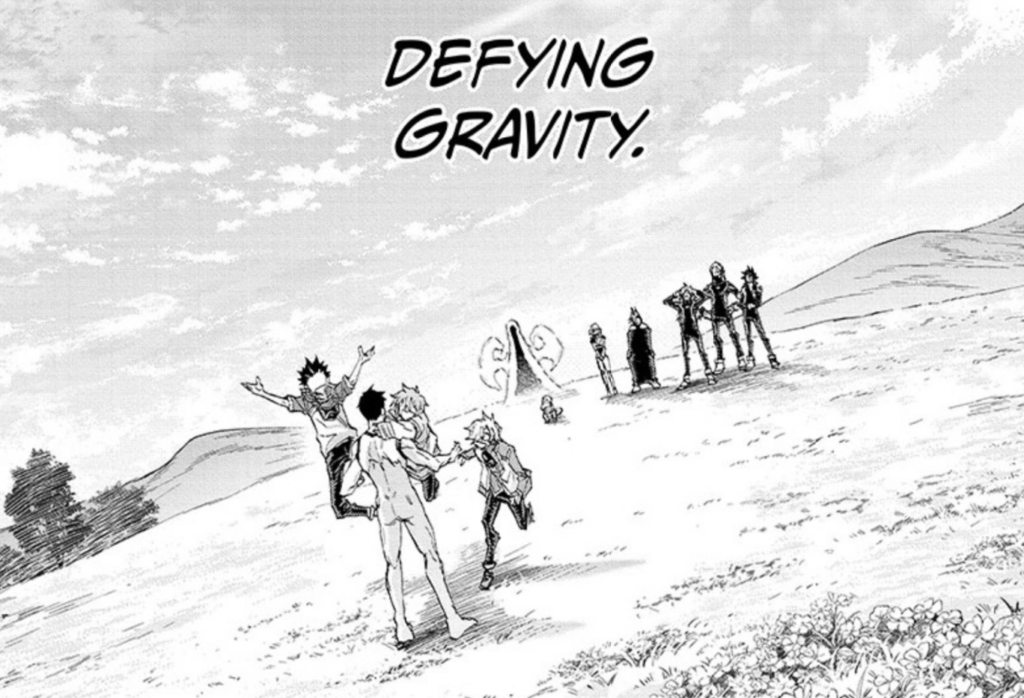 The beginning of a new week can only mean one thing: time for new Weekly Shonen Jump! This is where Jacob investigates the latest and greatest in the magazine, telling you what’s worth your time and what’s not. You can find coverage of other series under the tag Jump Time. Here’s Agravity Boys chapter 50.

When Agravity Boys first began, I languished the fact that Atsushi Nakamura’s excellent artwork was being used in service of such a ‘bizarre and disconcerting premise.’ In my initial review, I described it as ‘a drunk man… stagger[ing] back and forth with reckless abandon’ and only occasionally hitting the mark. Almost a year on, both of those things are still applicable, and apply perfectly to chapter 50, Agravity Boys’ ending.

I don’t think anyone expected Agravity Boys to end like this, least of all Atsushi Nakamura. Sure, the series wasn’t selling very well, but that was the case even back with the initial debut volume, so one has to wonder what the Jump editorial department was doing all this time. Biding their time considering how many other high-profile series the magazine has already lost? Perhaps, but we’ll never know for sure.

For now, all we do know is that Agravity Boys chapter 50 feels like a very rushed ending. It makes no attempt to wrap up the overall narrative (the quest to discover what happened to Earth) or explore any of the questions that have been around since the beginning. Instead, it picks up from last week’s chapter 49, or the climax of the Penis arc: that’s what makes me think that Nakamura didn’t have enough time to put together a proper ending.

Yeah, the Penis arc. If you’re not familiar with Agravity Boys, then you may be furrowing your brow wondering what on earth I’m talking about right now, but that’s just how this series rolls. Even chapter 50’s ending, to be honest, is mostly in keeping with how the series has operated until this point: inconsistently, marching entirely to the beat of its own drum.

Some parts of Agravity Boys chapter 50 are funny, such as how it uses the two-week break between Jump issues to further the hilarity surrounding how sudden and unexpected Baba’s death is. It also beautifully parodies the kind of Soul Jar collection plotline that you often find in fantasy series, but it’s not quite a proper conclusion.

Agravity Boys will be receiving a special chapter in an upcoming issue of Jump GIGA, which is described as an ‘ending’ for the series in much the same way as Time Paradox Ghostwriter. Good luck reading it legally, though, since VIZ Media didn’t pick up that chapter for translation: you’ll just have to brush up on your Japanese.

For now, Agravity Boys’ departure with chapter 50 destroys any hope of Atsushi Nakamura’s science-fiction series becoming the new Gintama. I’m hoping that he comes back sometime soon with a stronger premise, because he has clear talent. Even better: he teams up with a better author than himself!

You can read Agravity Boys chapter 50 for free via VIZ Media.