‘Akagi’ Takes Over Tokyo to Celebrate Finale After 27 Years 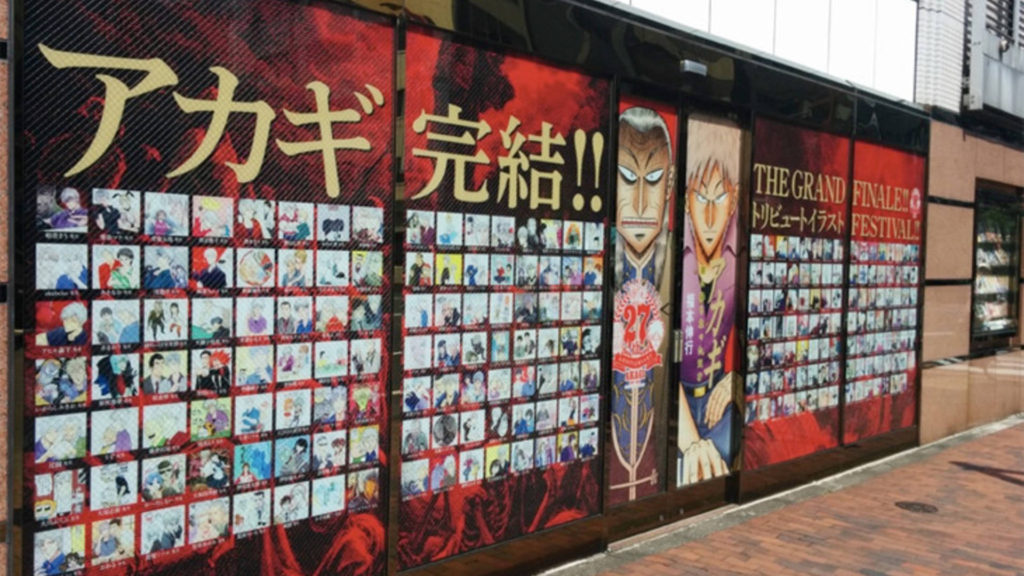 After 27 long years and 36 nerve-wracking volumes later, Nobuyuki Fukumoto’s legendary gambling manga Akagi has come to an end. Even among his other excellent works such as Kaiji and Ten, Akagi is not just his longest series, but his most fully realized yet – it stands to reason, then, that the author is honored for such a feat.

The final, 36th volume of the series will release on June 27, and to celebrate the end of the series anime goods chain Animate will be conducting a signing event with the mangaka himself – allowing fans a rare chance to meet and talk with the otherwise elusive, workaholic Fukumoto. The first signing event will take place at Animate Ikebukuro building no. 2 on July 1, and the second will take place at Animate Akihabara on July 28. Since no other venues have been announced, it’s probably safe to say that these dates will be your only chance.

That being said, you do need to have either bought or placed a reservation for both Akagi volume 36 and a special commemorative acrylic plate set to take part in the signing event. The final volume will set you back around 700 yen, but no details have yet been shared as to the design or price of the acrylic plate. Even so, this seems like a rather small price to pay for such a rare opportunity. Make sure to register to take part at either of the participating stores, however, as only limited spaces are available on a first come, first serve basis.

With all that being said, you can join in with the Akagi celebrations without having to spend a single yen – simply make your way over to the Takeshobo buildings in Tokyo and Iiidabashi to take a look at a special display on the windows of the ground floor. It looks a little something like this: To celebrate the ending of the manga, publisher Takeshobo gathered over 200 pieces of fanart which show off different aspects of the series and its world. The best of the bunch have been used to make this display at the Takeshobo offices, and it’s certainly something to behold. Just seeing the different styles and approaches to the series really reinforces how impactful it has been over its long run – something both Takeshobo and Fukumoto should rightfully celebrate. You can also check out all of the fanart online via Akagi’s official website.

Nobuyuki Fukumoto’s Akagi follows the titular Shigeru Akagi as he returns to the world of mahjong after defeating high ranking yakuza at the mere age of thirteen. Similar to the well-known Kaiji, the series explores the game of mahjong as well as the psychological states of the players in the great detail that Fukumoto has become famous for – with plenty of ‘zawa zawa,’ of course.

Animate Games Might Be What the Visual Novel Industry Needs