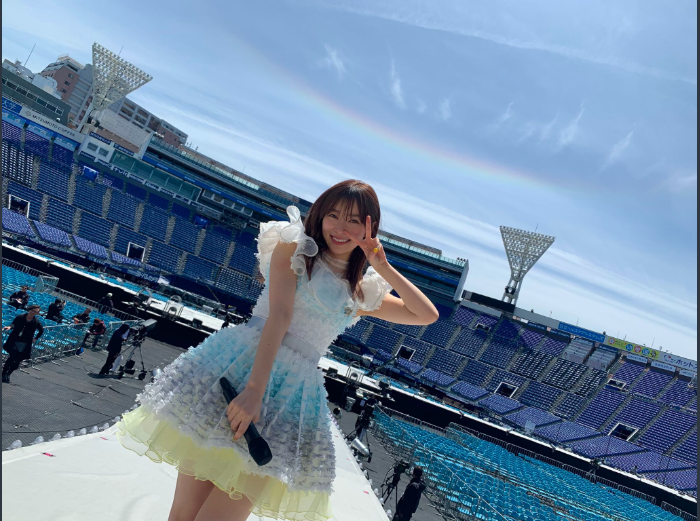 Long-running HKT48 member Rino Sashihara graduated from the group Sunday, April 28. Fittingly for the most popular member of the J-pop institution AKB48 ever, her farewell was blown out into a spectacle. Held at a sold-out Yokohama Stadium, members from the AKB-verse past and present showed up to wish Sashihara well in her post-idol life. Comedian Hitoshi Matsumoto swung by to cosplay as recently deceased rock ‘n’ roller Yuya Uchida, who collaborated with Sashihara a few years ago. Fans said their farewells with biggie-sized gestures of thanks.

This supersized goodbye to Sashihara also doubles as the only AKB-centric marquee event for 2019. In March, the group announced they wouldn’t be holding their annual general election this year. For the past decade, this has been AKB48’s centerpiece, helping drive the sales of singles into the millions and being broadcast nationally on TV, complete with coverage panels that would make CNN producers do a double take. For people not following the happenings of AKB48 and its many sister outfits, this was the best way to catch up with what the biggest musical outfit of the 2010s was up to.

These intersecting stories mark a very literal end of an era for the group, as they’ll see their most popular member ever head off to new territory while the folks behind AKB48 retool the group moving forward. But the departure of Sashihara and the lack of a general election in 2019 closes a specific chapter of J-pop history, too.

Eras rarely follow a neat path, even if lists celebrating specific periods make everything appear linear. AKB48’s peak years started in 2009 when their song “River” topped the Oricon singles chart, their first to do so. Every single after has taken the top spot. The biggest hits coming from AKB48’s world saleswise tended to be the election singles put out before the yearly event, coming with ballots fans needed to vote for their favorites. These usually became the year’s biggest selling single.

That fact underlines the entire model of AKB48 and their associated sister acts. Releases came out in multiple versions, and often come with extra goodies, ranging from ballots to tickets to handshake events. The model prioritized hardcore supporters with disposable income willing to buy multiple copies of the same song. AKB48 managed a handful of legitimate zeitgeist-capturing songs — the image-defining “Heavy Rotation,” the easy-breezy afternoon disco of “Koisuru Fortune Cookie” — but for the most part they became the second-highest-selling artist of the now-finished Heisei era by appealing to a very specific set of supporters.

AKB48’s success in the early 2010s shaped how J-pop would operate in the first half of the 2010s. Idols mimicking the AKB modeled started debuting at a rapid clip soon after, and pop music became a game of niches, different groups trying to appeal to smaller groups of fans.

This fact isn’t what fated AKB48’s era of J-pop to end. Really, all artists around the world have pivoted to this model, with social media and streaming sites like Spotify being the new spaces where fans go to show their support. And these platforms are easy to inflate.

Really though, it was how analog AKB48 and many other idol outfits operated during a time where the music world at large was shifting towards digital. AKB and their associated sister acts didn’t shy away from the internet — a large chunk of their success is owed to meme-able dances shared on YouTube — but their main strategy relied on physical goods.

The type of idol-dom AKB48 represented in Japan has been on the slow decline for a while now, but the double whammy of Sashihara’s graduation and no election wipes out the two most recognizable elements of the group from public purview. More importantly, though, the physical market they leaned on is starting to recede. A report from earlier this stream revealed that digital streaming is growing swiftly in the market. This is where J-pop is going next. Trying to replicate the physical-first times AKB48 pushed to the forefront is no longer the right move.

AKB48 and all the satellites in their orbit will carry on, and will have to adjust to this new reality. But the era they stood tall over is now over, and time will tell what comes next.