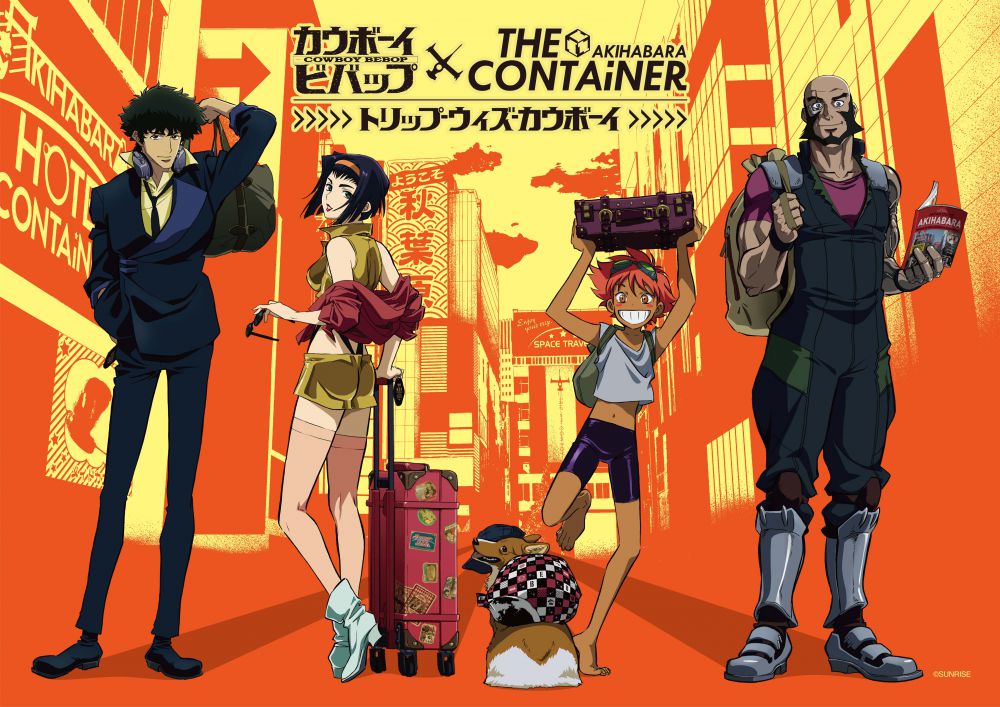 While the bulk of 20th-anniversary celebrations for Shinichiro Watanabe’s beloved science-fiction series Cowboy Bebop may already be out of the way, that hasn’t stopped otaku event space THE AKIHABARA CONTAiNER from announcing one last celebration of its own. From April 19 to April 28, it will play host to a new Cowboy Bebop pop-up shop in Akihabara featuring original goods and theming.

The concept for the new pop-up shop is rather well thought out. The website describes it as thus: “Akihabara, somewhere on a planet in the solar system of the distant future. Where idol, anime, game and other cultures overflow. On such a planet, Spike, Jet, Faye, Ed and Ein stand.” This then ties into the new key visual for the pop-up, drawn by none other than Kawamoto Toshihiro, character designer for the show. Check it out below:

Pretty cool, eh? This key visual will also form the basis of many of the original goods available as part of the pop-up. These include acrylic stands, clear files, coasters, and stickers.

Don’t go expecting a massive amount of limited edition goods though, as the pop-up’s inventory will be weighted more towards already existing goods such as mugs, phones cases, t-shirts, and other apparel. But even that should be pretty exciting for any serious Cowboy Bebop fan. After all, it was never the kind of show to get much merchandise in the first place, so to have any amount of merchandise gathered in one place – limited-edition or not – is an unprecedented opportunity.

It’s also really cool that THE AKIHABARA CONTAiNER have clearly put a fair amount of thought into the theming of the pop-up The shop’s decor will be themed around the ‘Akihabara of the future’ concept outlined above, allowing customers to ‘experience’ such a concept. Even in a small sense, it’s amazing that the Bebop universe is being expanded beyond its original 24 episodes and movie canon in this way. I, for one, can’t wait to go along and take in this new Bebop experience – and perhaps even buy a couple of things along the way.

You can see more details, including location and the full inventory, on SUNRISE’s website.