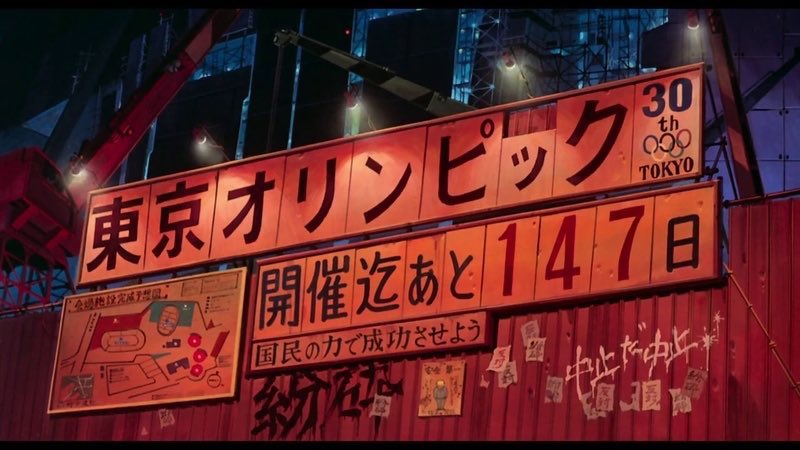 The 2020 Olympics have been drawing comparisons to the story in Katushiro Otomo’s legendary manga AKIRA as far back as the original announcement of Tokyo as the hosting city. In the story, a major setting is the under-construction 2020 Olympic stadium in Tokyo, so it’s easy to see the connection there. Things started seeming even more similar a few weeks ago when the initial outbreak of Coronavirus (now officially COVID-19) started taking over the news as fans of the manga started speculating that the Olympics should be canceled due to health concerns, and the Olympics in the manga were also canceled.

An iconic scene from the AKIRA manga and film is that of a sign outside of the Olympic stadium stating 147 days to the event, and the words “stopped” tagged just below. In the real world, just days ago on February 26th Prime Minister Shinzo Abe held a press conference urging companies to cancel all events scheduled to occur over the next few weeks. Additionally, the government made the request that schools should also close from March 2nd until the end of April, something which has garnered a lot of media coverage in the west over the past couple of days. In and of themselves these announcements are something for the sake of public safety, but things start to get a little creepy when you consider that yesterday was officially 147 days until the Olympic opening ceremonies. These preventative measures being called for in such close proximity of the date from the manga have not been lost on the internet, which immediately ran with the comparison. The topic quickly started trending on Twitter, with many people speculating that cancelation is on its way.

The Reality of the Situation

The Olympics have not been canceled, nor has there been any public discussion of such a thing happening just yet. 147 days really isn’t a long period of time, and COVID-19 is gaining more attention day by day, but governments around the world are taking serious measures to contain the outbreak and vaccines are already in development. Could the Olympics still be canceled? Sure, but I think we’re going to have a lot more to worry about if the outbreak is still serious enough in June to call for such a thing to happen. Here’s hoping that everything is under control soon, and in such a way that global fears will be quelled and all identified cases can be dealt with quickly and effectively.

In the meantime, if coincidences like this keep popping up it might be time to start looking into buying a motorcycle.