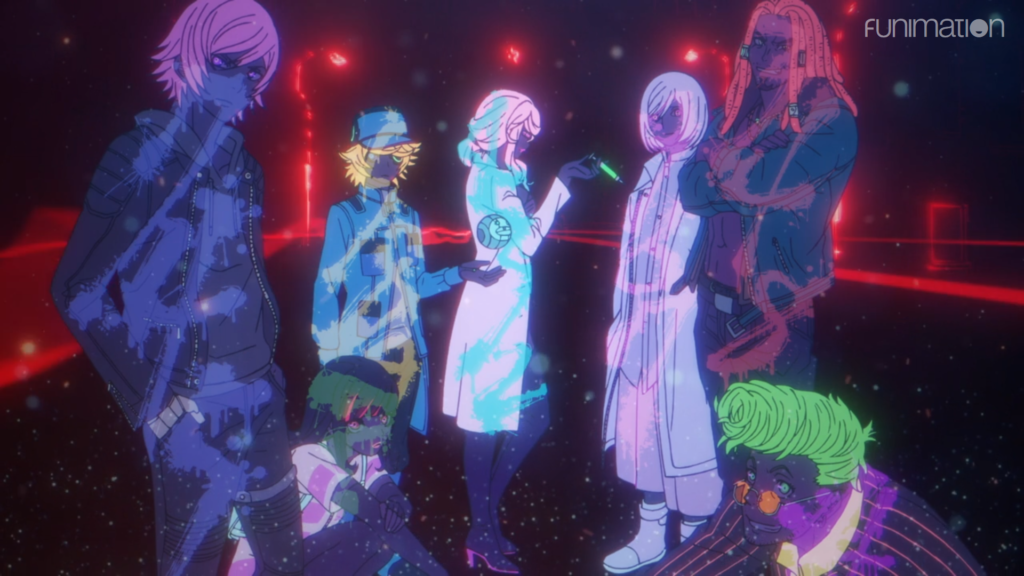 As I finished up Akudama Drive, a grittier than usual Japanese cartoon set in a not-so-utopian near future and conveniently backlit by all sorts of neon pinks, blues, and purples, it dawned on me that this anime came out at the same time as the Polish game Cyberpunk 2077. I am pondering whether two half cyber, half punk pieces of narrative art produced in two different countries that came out at the same time are not doing us any good in properly understanding that there are reasons ‘The Zeitgeist’ keeps serving up dystopia. The show is probably the result of the many not wonderful goings-on in the world leading Danganronpa creator Kazutaka Kodaka and his new studio Too Kyo games to team up with Studio Pierrot to make an original anime about a broken society under harsh authoritarian rule upheld by openly murderous law enforcement producing violent criminals, but through an honest attempt to address these themes, we got a pretty good show at least.

Those particularly violent criminals… Akudama Drive stars a bunch of them, most of whom are pictured right above these words, and they are in fact what the Akudama are. They all have convenient names like Brawler, Cutthroat, and Courier that both allow you to call these characters something and tell you what they’re about. Previously not a violent criminal, one Swindler gets caught up in these Akudamas’ dealings through a twist of bad fate and has to keep up with appearances as otherwise she would probably be killed without a second thought. These dealings in question see a group of Akudama forced into cooperating for a group heist that starts out as a high body count fun, but gets increasingly real and even borders on harrowing as it goes on. With official police executors hot on their tail and forces running this Blade Runner-esque society not being exactly transparent about the state of the world (shocker there), stakes balloon quickly.

Even from episode 1, I was wholly impressed with Akudama Drive’s commitment to doing everything it does at a bewildering 200 percent, and it’s almost impossible not to start with the animation. As if the dripping-in-Outrun aesthetics of 2XXX Kansai weren’t pleasing to the eye enough, returning Danganronpa champion Rui Komatsuzaki’s instantly identifiable characters were so lavishly and specifically animated to pop off the screen. You might originally be tantalized by that in vogue Cyberpunk imagery, or understandably pushed away by the iconography so heavily relied on in recent years. Either way, the neon illumination and purple ambiance only accents are one of the show’s twists, as its visuals actually have more to them than the Vaporwave filters. Even when the Akudama are inside one of these buildings, or find themselves in non-candy fluorescent-drenched scenery, they still exert texture and fluidity. It feels great in motion, and it’s one of the few shows to look great in pauses too.

A ton of care was applied to how Akudama Drive portrays itself, but what it portrays is also something to behold, for better and for worse. Perhaps unsurprisingly coming from the creators of Danganronpa, the anime is extremely violent, nakedly portraying brutality against flesh that for some could be hard to watch. The violence doesn’t feel so meaty in the first half of the show, in which Brawler and Cutthroat pile up the corpses. The series’ enjoyably kinetic action sequences against state-sanctioned criminal killers trying to do their job almost comes across comedic. However, as the show goes on, it changes its focus from a heist arc to one centering around two very unfortunate children. There, the violence narrows from indiscriminate plowing through crowds and big fights to more singular and precise depictions of pain to individuals. If you can stomach it, it doesn’t quite come across as violence-porn like Elfen Leid, but let’s say the Japanese TV broadcast sure was censored for a reason.

Over-carving of skin isn’t the only aspect where Akudama Drive’s ‘let’s do it to the max’ philosophy ends up shooting itself in the foot. Being about a nebulous dystopian society, the show attempts to tackle some serious issues with a viewpoint I don’t disagree with in theory. Law enforcement using over-excessive force, leading to the much cruel death of ‘criminals’ and ‘innocents’ alike, protests and riots in which more violence is doled… All are, unfortunately, a very real-world thing and I commend Too Kyo and Pierrot for not shying away from this. Its inclusion feels cheaper than it should, however, when you are having one of your main characters being ‘some dude who’s killed like 1000 people for fun’. He is at odds with the message, and there is also some clumsy execution from a narrative standpoint. Maybe if the show had more than 12 episodes, it could have had room to address these horrors with the fullness necessary to convey their severity. That said, it was a surprisingly good effort.

Kazutaka Kodaka also strives to portray what scraps of wholesomeness exist in the Akudama Drive world with great sincerity; that same sincerity that makes the teen murder simulator Danganronpa series so emotionally captivating. The most endearing facet in the entire series comes in the form of the previously mentioned unfortunate children (whom saying anything about would be a cornucopia of spoiler), and their relationship with Swindler who mothers them without a second thought. The show very succinctly captures their little hearts opening up, slowly learning what love is in a word that appears to have none. While this appears at odds with the show’s unflinching displays of violence, and admittedly makes for jarring contrast, I’d argue it comes from the creator’s same narrative philosophy. Less complex of a reason than that, it succeeds in being emotionally resonating, despite whatever nitpicks you could have with the odds and ends.

Even if Akudama Drive didn’t contain violence on par with 2020s Gleipnir, it understandably wouldn’t be for everyone. The whole show’s a lot, to summarize, regardless of your particular excitement or tiredness about eye-pleasing but generic cyberpunk imagery. Undeniably Kodaka and Too Kyo Games went into this with a lot of that ambition, which brought the show to some great highs but also to some weird spots along the way. For an original anime created by a game studio though, there’s a lot it does right and there’s plenty to like about it too. I wish more anime were this courageous in its spectacular presentation, honest depictions of humanity, and the controversial messaging, even if said messaging didn’t fully gel in an artistic sense. It’s the young studio’s best production to date, following the FMV kind-of-a-game kind-of-a-movie Death Come True and the half-finished World’s End Club. I want to see what Too Kyo Games will do next, even if they keep not making games.

You can watch Akudama Drive in English exclusively on Funimation.