Alita: Battle Angel is a CGI Spectacle Worth Watching 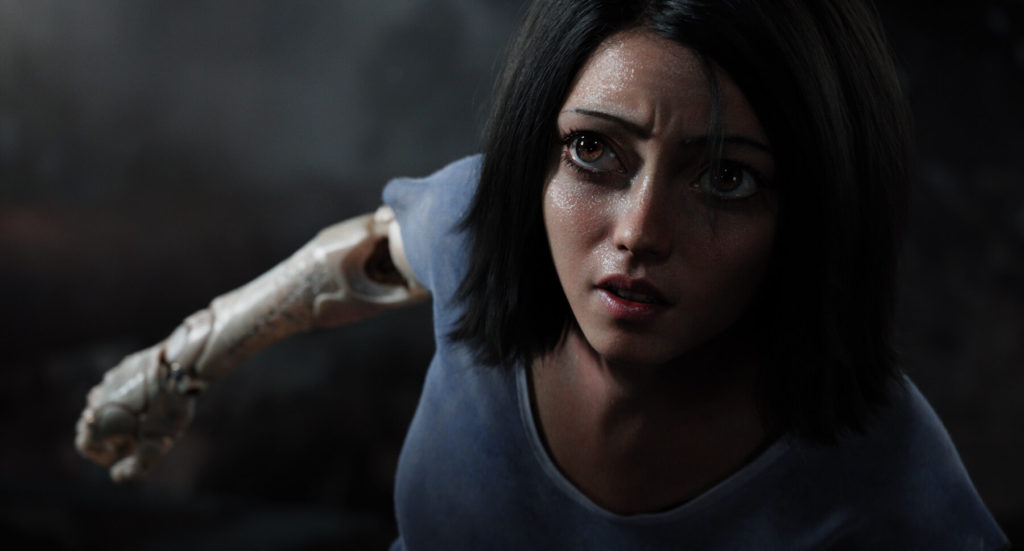 Before diving into the core of this review, let me preface things by sharing that I knew very little about the source material for Alita: Battle Angel until just a few days prior to attending a preview screening for the movie. Every single trailer for the film drew me into what looked to be a fascinating world and set of characters, but due to being so busy with other things, I never had a chance to read the manga this film was based upon until the beginning of this week. With that being said, in those days leading up to the screening when I finally did get the chance to give it a try, I was blown away.

There was this incredible detail to the raw grunge of the post-apocalyptic world of Iron City, a detail that eventually became a recurring staple of every scenic panel of the manga. The characters were paired with both interesting designs and personalities, while the manga’s ruthless setting only reinforced the surrealism of the world they lived in, opting out of depressing undertones and other norms of the genre. It was through this combo that the manga quickly became a real page-turner for me, and I found myself still flicking through the pages even while queuing for the film — but all this excitement left me worried for the film that left me so excited to read this manga in the first place.

Hollywood has a known poor track record with this sort of adaptation. It’s probably not necessary for me to cite how films like Dragonball Evolution or the recent Ghost in the Shell adaptation mostly failed in their attempts to bring these properties to the West. As much as producer James Cameron spoke up his desires to adapt this movie for decades due to his love for the original work, I feared what I was enjoying about this manga would be lost to the CGI wilderness.

While I don’t see an issue and in fact support change within the adaptive process in order to create something that better suits a new medium, I do expect that any changes made retain a modicum of respect for the original work. It was obvious to me that in order to turn a serialized manga into a 2-hour movie that changes would be required, and my fear was that the artistic license taken would morph Alita into something that lost what made the manga so interesting to me.

Luckily, my fear was misplaced. 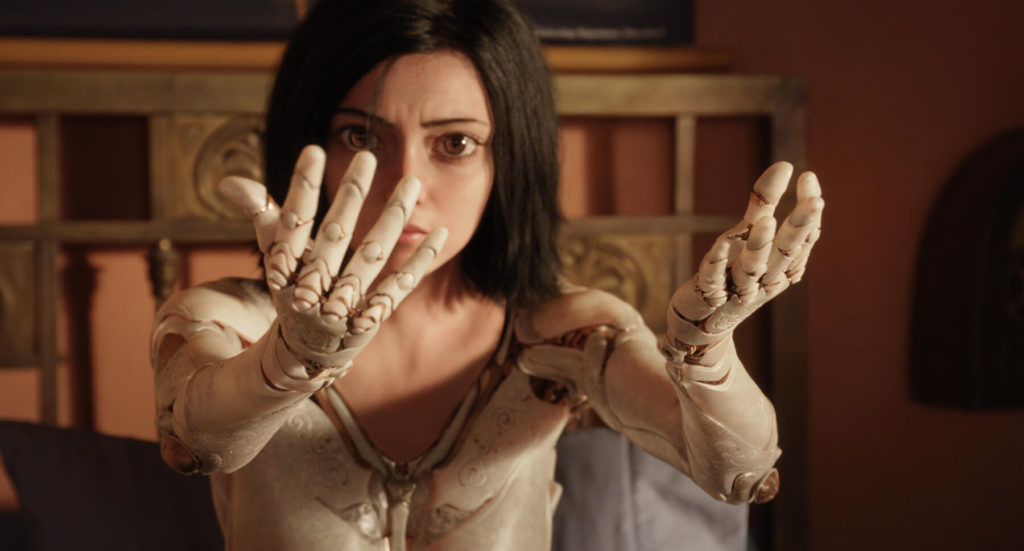 Alita: Battle Angel tells the story of the first two volumes of the manga it’s based upon. In this world, the city of Zalem is the final floating city left following ‘The Fall’, a massive battle that occurred 300 years before the events of this film that destroyed many of the floating cities and most of the planet. Below Zalem is Iron City, the setting within which the entire movie takes place and a dumping ground for the waste from the city above. Doctor Ido, a man who spends his days repairing the various cyborgs who live in the city, finds the metallic head of Alita in the scrapyard while on a search for new parts, a unique find due to her brain remaining completely intact despite her body being destroyed. Ido repairs and decides to look after her, even if any attempts to ask about her past failed due to her not retaining any memories from prior to their meeting. In Iron City, Alita meets Hugo, a young boy whom she befriends who promises to teach her about Iron City and help to trigger her memories, and although Ido wants to protect her from any harm, she is willing to fight if that is what is necessary to discover the truth about her past and to protect those she cares about.

The first thing that will strike you when you see this film is how it looks (and no, I’m not referring to Alita’s eyes which didn’t even register as an issue for me after the first scene she was a part of). This is a film unashamed of its budget and scale. If there’s one thing that can’t be faulted about this movie, it has to be on its recreation of Iron City and the character of Alita into a wonder of CGI artistry. I’d argue the city loses some of the grit it once had for a more clean-cut dystopian setting, yet it certainly looks the part and, like the rest of the film, has an endearing charm to it.

While the breakneck speed and intense destruction of Motorball may have only found its place within this film as an excuse for some large-scale CGI action sequences, its inclusion remains a wonder to behold. This bloodsport is the primary source of entertainment for residents of the city, where heavily-augmented cyborgs race around a track at high speeds, avoiding obstacles and other players willing to destroy them in order to through a ball into a basket to score points and, in turn, win the match. For the best players, those with the ability to become a champion, a chance to live in the sky-city of Zalem awaits them. Its speed and action are an exhilarating experience, for sure.

Though these may be the most impressive examples of its striking visual design, the film doesn’t just use its budget as an excuse to be a bit flashy. This film justifies its budget with some very impressive world building and set design etched into the highly-detailed CG environments that take on a life of their own when experienced in 3D. Even when certain aspects of the film’s story fails to hit the mark and end up pulling you away from the moment, the world still manages to suck you right back in.

Speaking of story, as that last sentence perhaps hinted at, this is easily the film’s weakest aspect. For all I may feel that the movie on the whole pulls off well, it certainly has its fair share of problems. One decision made with the film’s direction that I would have to disagree with is the increased focus on the romantic relationship between Alita and Hugo, morphing it from a subplot in the original work to a central focus and driving force for this entire movie. Hugo is a young boy who works a variety of jobs within Iron City in order to collect 10 million credits so they can hitch a ride up to Zalem. Within the manga, his character is relatively minor and serves mostly as a stepping stone in Alita’s development as a character. He gets a little bit of attention and we learn of his motivations and his life, yet in reality, his appearance in the manga is rather fleeting. While making him a major character within the movie should allow you to delve further into his personality, in reality, it makes him less likely, with his role as a love interest threatening to derail the entire experience of this film. 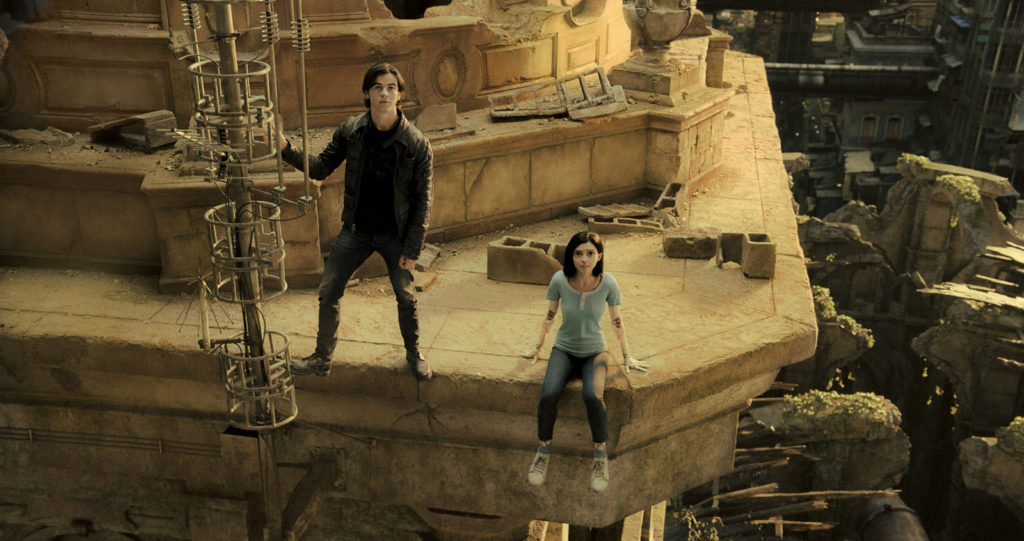 While I’d say the performance of Rosa Salazar as Alita in this film was a personal highlight for me, Hugo’s character is rather bland and would have been rather forgettable had he not featured as prominently as he did. Their relationship lacks any real depth, often devolving into an overly-sappy and rather childish romance with the character writing to match. The line ‘we only belong one place, and that’s together’ was so cheesy, especially in the context of the scene it belongs to, that it ended up causing me to actively recoil in my seat.

It’s not just here where I have issues with the plot, either. While a few new characters were brought into the film, including a few friends for Hugo, none felt like they served any purpose to the wider narrative and were quickly forgotten as soon as they were off-camera. Chiren’s demeanour and framing within the movie suggests a level of importance for the character that never ends up being realised, making her appearance in this film redundant and distracting. Even characters that were present in the manga, such as the bounty hunters of Iron City, are left a little underdeveloped and could perhaps have been better-handled than they were.

As a whole, though, the film is able to surpass these issues. This film ends up being better than the sum of its parts by overcoming the clunky romance that threatens to consume it, proving to be one of the more exciting blockbuster adventures in recent years. While superheroes have dominated Hollywood for the past few years, sci-fi stories like this have either been poorly made (Mortal Engines) or unsuccessful (Mortal Engines again, Valerian), and although Alita could still prove to be the latter, it certainly isn’t the former. One consequence of the dominance of the modern superhero film replacing the modern blockbuster is that many of the big budget films of recent years end up blending into one another and being rather forgettable, at least for me. This breaks that repetitive mould with some style, and while it lacks many of the deeper story elements of the original work the result is still a fun action event movie with some genuinely stunning visual effects. It won’t be the best movie you see this year, but Alita: Battle Angel is a film worth watching.

Now I just wish I could attend those Alita: Battle Angel events going on in a few US cities right now… alas, I guess I’ll just get back to the manga instead.