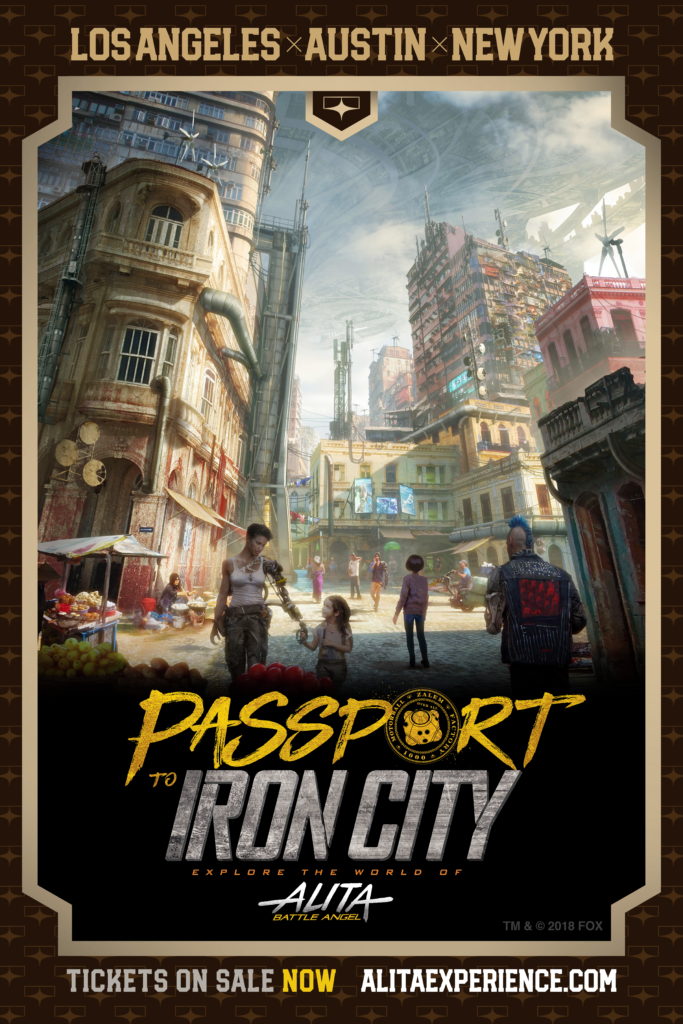 There’s been more than a few false starts when it comes to attempts by Hollywood to adapt Japanese manga and anime properties for the big screen, but one with the potential to buck this trend is Alita: Battle Angel, the new live action film directed by Robert Rodriguez and produced by James Cameron. Each trailer has only made me more curious and further excited to experience the world within which the movie is set in, which isn’t that far away given the upcoming February 14th release in cinemas in North America. While I may be quite excited to experience the movie through the medium of cinema, people living in Los Angeles, New York or Austin have the opportunity to step into the Iron City within which the movie takes place through the ‘Alita: Battle Angel – Passport to Iron City’ immersive experience.

Opening on January 23rd in Los Angeles, January 26th in New York, and January 29th in Austin, the aim of the experience is to transport attendees to Iron City where they can interact with the city’s residents, earn credits through the completion of puzzles and challenges, experiment with technology from the movie and uncover clues about the city’s force in power in order to determine their fate.

Upon arriving at the ticketed event, guests will gather in an exact replica of the Kansas bar from the film, where they’ll have the chance to meet their teammates and learn more about the secrets of Iron City. Every Kansas bar location will feature an exclusive beer from Three Weavers Brewing, crafted specifically for each city and themed around Alita’s world, along with Underwood wine from Union Wine Co, if you’re the drinking type. From there, Iron City’s residents will escort guests onto the streets of the city itself, where guests can explore and continue their adventure. At the end of the experience, guests will receive a post-experience Iron City assessment that assigns them to their individually tailored role within Iron City, based on the decisions they made while exploring the city. Each winning team will walk away with a unique Iron City souvenir.

Tickets are available to purchase at the official website for the event, with tickets costing $25 before the film’s release, with prices increasing after February 13th to $55. While I personally can’t experience it myself even though I would like to, fans of the original manga or those who are excited for the upcoming film should have lots of fun exploring Iron City for themselves.

Alita: Battle Angel is a CGI Spectacle Worth Watching

The Soundtrack for Persona 5 Is Getting a Vinyl Release