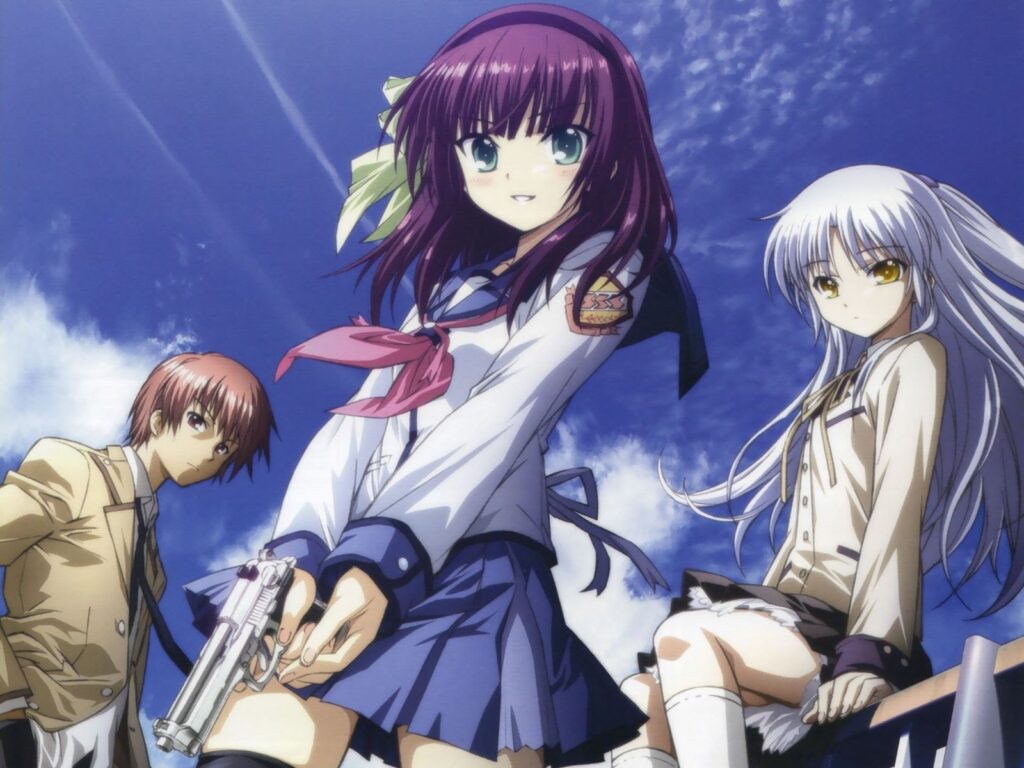 A mysterious school is actually a waystation for people who aren’t quite ready to be dead yet in the anime series Angel Beats! It’s a short, fun series; only thirteen episodes long. The series pokes fun at high school and high school anime cliches and tropes. When it’s not being silly and funny, there’s actually quite a bit of metaphysical philosophy in there as well.

Warning: There are a few unavoidable spoilers ahead.

No, it’s Not Highschool of the Dead

Typical, average teen student Yuzuru Otonashi wakes up one day with a case of amnesia. 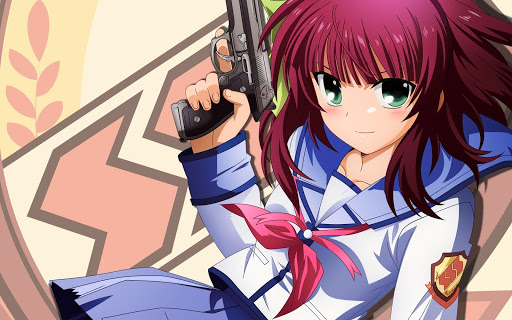 He quickly meets Yuri Nakamura. Yuri, or Yurippe as some people at school have nicknamed her, is the leader of an organization called the SSS.

SSS stands for Shinda Sekai Sensen, or literally ‘World of the Dead War Front.’ It also gets translated as ‘Afterlife Battlefront,’ which is less of a mouthful.

She wants Otonashi to join the SSS in its fight against God.

Yuri blames God for the situation that they now find themselves in (more about that below).

In Angel Beats!, God’s presumed representative is a mysterious girl called Angel. This is the SSS’s nickname for her, based on the assumption that she is a literal angel. Her real name will be revealed later in the series.

Angel is the student council president. She is dedicated to keeping the peace at school, which makes her the enemy of the SSS.

Otonashi (and by extension, the audience) learns a lot in the first episode. First of all, everybody at school is dead, not undead; this isn’t that sort of series. They’re just dead, and ‘living’ in the afterlife.

Since they’re already dead, they can’t die. People who do ‘die’ will come back later unharmed. But if they get too used to living a ‘normal’ life at school, they will disappear completely.

So, the SSS wants to stop that from happening. And they try to fight Angel in various ways.

Angel has a variety of sharp, pointy ways to defend herself, primarily the Hand Sonic, blades which she can make at will. These supernatural powers make her seem inhuman, especially when combined with her logical, stoic nature.

Throughout this short series, the SSS goes on various missions. These often feel like a mixture of video game antics and action movie caper. There’s a certain amount of comedy from the booby traps and other obstacles since none of the deaths are permanent.

There is a baseball episode and school exams. We learn about several of the main characters’ past lives, and many are tragic in some way. People disappear.

Some of the ‘students’ aren’t real. Yuri calls these non-player characters, which adds to the video game feel of the SSS missions.

Eventually, we learn Angel’s real name, Kanade Tachibana. Kanade loses her council title and is replaced by Ayato Naoi, the council vice president. At first, Naoi seems to be just as dangerous as Angel/ Kanade.

Kanade becomes less of a presumed ‘bad guy’ and more friendly as the series goes on. We learn of Naoi’s history, and he joins the SSS.

There’s a subplot involving clones of Kanade, who seem to be more like the ‘old’ Angel.

By the end of the series, it has become clear that disappearing is not a bad thing. Rather, it should be the ultimate goal of all the humans at the afterlife school.

Otonashi and Kanade decide to help the other students. Each one has something important, special or tragic holding them back. That needs to be fixed before they can ascend.

The final episode is a graduation episode, with the remaining characters literally and figuratively moving on from school.

Where Good Anime Go to Die

There are some interesting comparisons to other anime. Given the nature of the series, some of this is probably deliberate.

SSS is a version of the SOS Brigade, only with a slightly different set of goals. (They both use ‘sekai’ or ‘world’ in the title.)

Yuri’s take-charge personality, willingness to break school rules, and general appearance make her a good analog for Haruhi Suzumiya. Ironically, Yuri’s enemy is God (at least initially), while Haruhi herself may be God.

This would make Otonashi, the main character of the anime, Kyon. It’s not a bad comparison, either. Of course, plenty of other series feature male protagonists who play the deadpan straight man against an overbearing, often tsundere female counterpart.

Girls Dead Monster could arguably be a version of Afterschool Tea Time from K-On! or some other schoolgirl band anime (maybe). The band even has a Yui, who becomes the lead vocalist, much like the other Yui.

The powerful and villainous student council has been seen in plenty of other school-based anime shows.

The Afterlife and Philosophy

Angel Beats! is also an interesting anime series from a philosophical perspective.

If Japan was a Catholic country, the high school might be considered a rather literal metaphor for Purgatory, the ‘waiting room’ where souls remain until they are ready for Heaven or Hell. The series has a character called Angel, and the main characters are all dead.

We also eventually learn that the high school’s purpose is somewhat similar to the Catholic idea. Indeed, Christian viewers are certainly welcome to interpret the series that way, if they want.

However, Angel Beats! is not a Western animation series. It is probably much more accurate to consider the series in the context of Japan’s Shinto-Buddhist religious roots — especially the Buddhist half, since death isn’t really a major focus of Shinto.

In general, Buddhism tends to be very concerned about what happens after death. There are many different branches of Buddhism, but they all deal with the subject of life after death.

Buddhism is partially based on Hinduism, just as Christianity has roots in Judaism. Hinduism has the idea of endless reincarnation; part of classical, traditional Buddhism is all about trying to break this cycle of rebirth by letting go of our many attachments and obtaining enlightenment.

Japanese Buddhism is divided up into several sects, so it is difficult to generalize. But the concept of an afterlife frequently pops up, and Pure Land Buddhism has the concept of heaven — which apparently resembles the Byodo-in Temple.

So, What Does This Have to Do with Angel Beats?

So, let’s get back to Angel Beats! and take another look at the plot with the benefit of hindsight.

The students have all died, but they haven’t ‘moved on’ yet. They’re all aware that they are dead, nobody is under the illusion that this is an ordinary high school, and they talk about the school as if it were the afterlife. The problem is, the school isn’t the full, total afterlife.

They all have regrets or something holding them back, they are still too attached to their old lives, in other words. They can only move on when they have solved whatever it is that is keeping them attached to the physical world and their physical bodies.

Most of this is very Buddhist in nature. Admittedly, the idea of a high school afterlife waystation still feels more like Purgatory than anything from traditional Japanese religion, but we wouldn’t have the series without it.

Of course, Japanese pop culture tends to be very lackadaisical about the subject of religion, which reflects the attitude that many modern Japanese have toward religion in general. Anime characters attend festivals, visit shrines, and so on, but it’s very different from the Western idea.

Note that the series never actually fully reveals what happens to souls after they leave the high school and disappear. Do they achieve enlightenment, or does something else happen? Perhaps heaven actually does look like the Byodo-in.

Another possibility is reincarnation. It’s not really brought up as a possibility until the very end of the final episode, and even then it’s very vague.

Angel Beats! was created by Jun Maeda, one of the co-founders of the visual novel brand Key.

Prior to creating Angel Beats!, Maeda had been involved with key products Air, Kanon and Clannad.

The Angel Beats! TV anime aired in 2010. It was directed by Seiji Kishi, who also directed Radiant and Humanity Has Declined.

A short story prequel and a manga came out a year ahead of the anime. The short story, Angel Beats! Track Zero tells about the founding of the SSS. It started in November 2009 and finished in May 2010. It was made into a book in 2010.

The manga was a yonkoma, titled Angel Beats! The 4-koma: Our Battlefront March Song. It started in 2009 and ended in 2013. It appeared in Dengeki G’s Magazine, a magazine for fans of bishojo games, or ‘gal games.’

An OVA, Stairway to Heaven, came out in 2010. This was a midquel, or interquel. The SSS’s latest scheme fails, and there is a sports festival.

Another interquel OVA, Hell’s Kitchen, came out in 2015. This one takes place during Golden Week.

A visual novel was released in 2015. In Angel Beats! 1st Beat, the player plays as Otonashi. Otonashi must help the other characters.

The opening for Angel Beats! features the theme song My Soul, Your Beats!, sung by Lia. Lia also performed theme songs for Air and Clannad.

Angel/ Kanade plays the piano in the opening