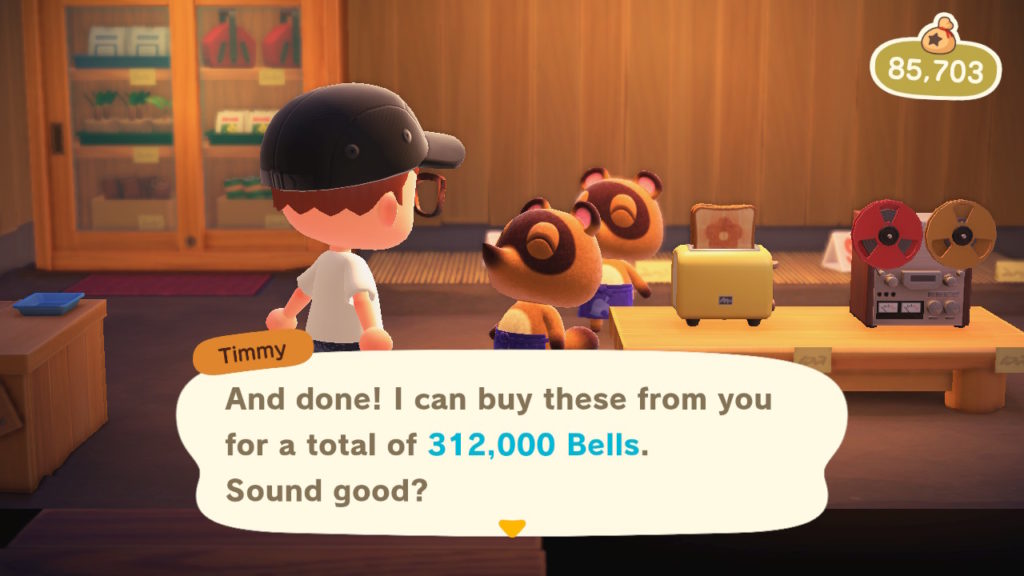 Paying off your house in Animal Crossing is always a time-consuming task, so much so that jokes about Tom Nook’s loan sharking activities persist enough that the developers have openly said they think he’s just misunderstood. For this reason, everyone is on the lookout for quick money-making tricks as soon as the game comes out, and Animal Crossing: New Horizons is no exception. Below we highlight a few of the most effective ways to make bells fast. Of course, new strategies are found every day so we’ll do our best to keep this guide as up to date as possible. 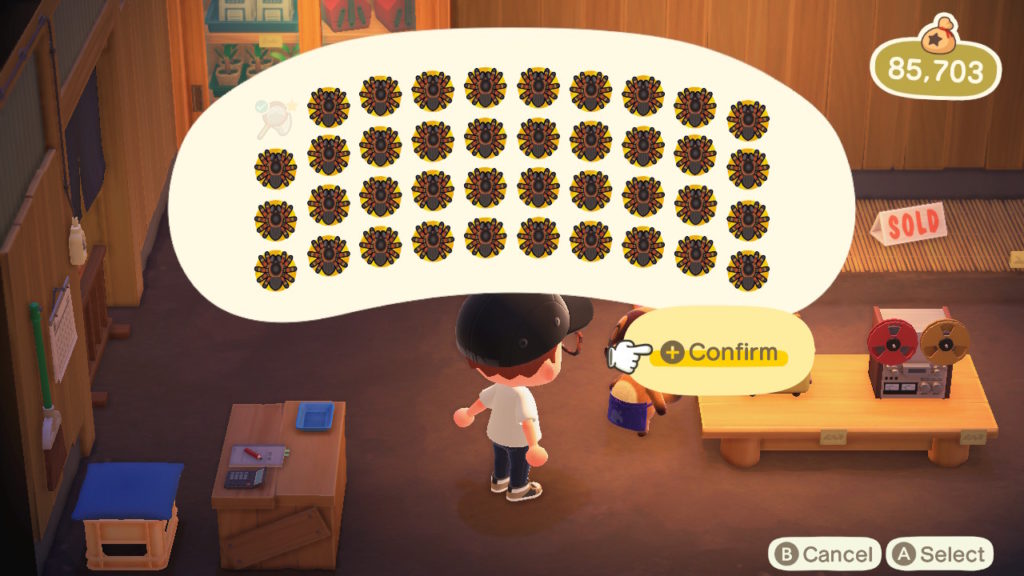 Farming bugs and fish have always been a staple in making bells quick in the Animal Crossing series but move over beetles because tarantulas are king in New Horizons, at least from the months of November-April. Selling for 8,000 bells apiece these creepy-crawlies are currently the hot commodity on the block. If you have your strategy down correctly, you can earn upwards of 300,000 bells in less than an hour with a bit of prep work and excellent timing. Spawning from 7pm – 4am each day, you’re going to need at least the following to get the most of out your hunt:

I also recommend the following (be prepared to break and/or leave these on the island):

With that in tow, head over to Dodo Airlines and make a visit to a mystery island. Mystery island layouts will spawn at random, and some layouts are infinitely better for this strategy than others. Additionally, it’s possible to end up on an island where only Emperor Butterflies spawn (which isn’t terrible, they sell for 2,500 bells each) but likewise if you’re lucky you’ll get one where only tarantulas spawn. Besides the tarantula island, I find the bamboo island to be the best option for filling up your pockets with tarantulas quickly.

Once you land, you can just keep an eye out for tarantulas but with the way bugs spawn, the best strategy is to do a bit of extra work and remove all of the trees, rocks, weeds, and flowers from the island. There are a couple of reasons for doing this. First, once everything is all cleared out you can clearly identify all bugs much easier without all of the extra visual distractions. Second, other bugs can spawn on the island too. By removing trees, flowers, and rocks you reduce the number of possible species to tiger beetles, tarantulas, mole crickets, and wharf roaches. With those being the only species, ignore the mole cricket (only one can spawn at a time) and scare off the beetles and roaches by running toward them until tarantulas spawn. Ideally, your landscape should be completely empty.

Now that you have the landscape cleared out, you can start running a route that covers all grassy areas to check for tarantulas and tiger beetles, and the rocky areas on the island coast to check for wharf roaches. There will always be 2 bugs on the overworld at any given time. When you see a tarantula don’t immediately run up to it, I recommend walking at normal speed directly at it and listen for the noise it makes when it begins to chase you. Swing your net right when you hear the pouncing sound and you should catch the tarantula, it might take a few tries to get down but once you have the timing you’re golden as long as the tarantulas don’t sneak up on you when they spawn. Alternatively, there is another strategy that reduces risk of being stung to zero but will take much longer to fill up your pockets (unless you’re on the tarantula only island plot). 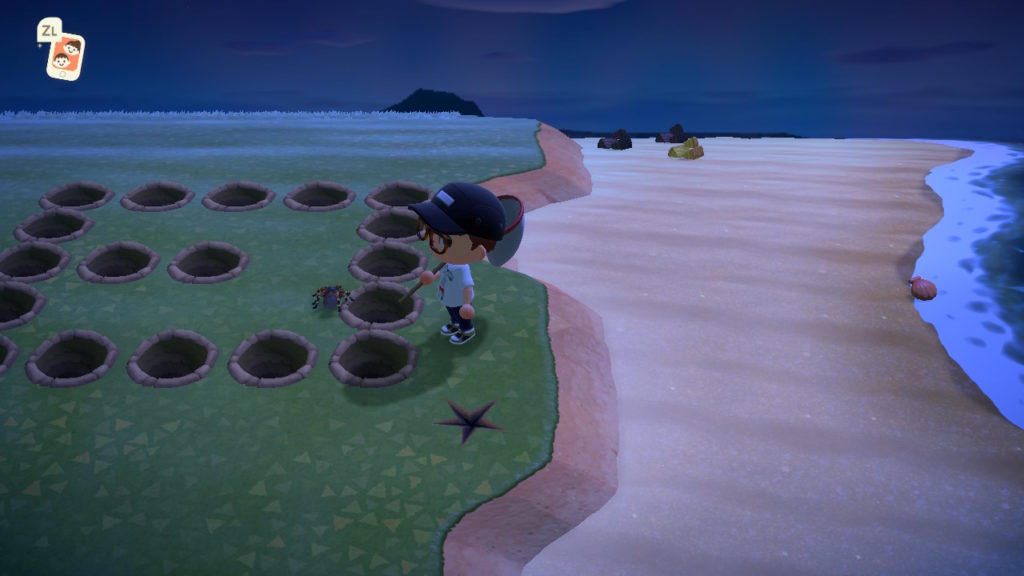 Dig a series of holes in the shape above and get a tarantula to chase you into it. Jump over one of the holes after running inside and then seal the section up, the tarantula chasing you then won’t be able to get out. Now at this point, no other tarantulas that spawn on the island will chase you because only one tarantula can be in chase mode at a time. Just walk up to the others (if you run they tend to run away and bury themselves) and swing your net to your heart’s content. As stated above, this works best on the tarantula only island because you know there will be 2 or 3 other spiders running around, but this can absolutely work on any plot of land where they spawn. To get a better idea of how this all works, refer to this Japanese twitter video:

Now you can fill up your pockets and offload them to Timmy & Tommy Nook as many times as you like!

The Stalk Market in Animal Crossing has been in the series since the very beginning. Every Sunday Sow Joan would come to your town and sell you turnips at a price set for that week, each day after you then go to Nook’s Cranny and check how much they’re selling for and hopefully flip them for a profit. Everything resets on the following Sunday (the previous week’s unsold turnips spoil at this point) and you can do it all over again. This feature still persists in New Horizons, but rather than Joan being the weekly visitor her granddaughter Daisy Mae shows up every Sunday from 5 am-12 pm to fill the role.

Just like the stock market in real life, this would seem like a rather high-risk endeavor to tackle, but if you have a friend to play with and are willing to time travel by changing your system clock, then you can really work this feature to your own advantage. Just find a day where turnips are selling at a particularly low price, and then have your friend find a day where the Nooks are buying at a significantly higher price. Buy in your town and sell in theirs, it’s that easy. You can make over one million bells in a single trip in this way, and it’s basically the most legitimate way to earn bells quickly in massive amounts right now. Note that each town has to have already opened Nook’s Cranny or a higher shop equivalent for this trick to work, but most players should be at that point within the first few days of play.

Update 3/26/2020: This method has now been patched out via an update, but players still using version 1.0 or 1.1.0 are still able to make use of it. You can check your version number on the title screen of the game.

This is easily the most controversial of the current bell making methods, but it does exist and we do want to let you know about it. It’s only been a few days since the game has released and an item duplication glitch has already been found. It works best in local play as of right now, so you’ll need 2 villagers in your town, and it’s easier to execute with a friend due to the need for a second player. Basically, you take a single tile table like the cardboard box (found for free inside the recycling box at resident services) and place an item on top of it. Upon doing son, one player should start spinning the cardboard box while the other player grabs the item placed on top of it. Once you have the timing down, the item will continue to spin with the box and the player grabbing the item will pull duplicates to fill their inventory. It’s not particularly easy to explain in words, so here’s a helpful video from YouTuber AbdallahSmash026 demonstrating the glitch:

Using an expensive item like the Nintendo Switch that was gifted during the game’s first update will net you a huge profit rather quickly, additionally, once you have the crown item you can use that to earn 12 million bells in one trip to Nook’s Cranny! Of course, since this is a glitch there is a high chance that this is going to be patched out in a future update. Another thing to note is that this can result in the generation of a glitched item in your inventory, although it seems very rare. If you get the glitched item, drop it on the ground somewhere that you can build one of Nook’s “public works” projects, and build something on top of it or start another villager and build their house on top of it. We don’t know if there are any long term negative effects from this yet either, but it seems pretty safe as of right now.

I personally stick with the Tarantula method because I’m in it for the long haul. Completing the Nook Miles challenges is a major motivator for me, and catching all of those bugs definitely helps toward that goal while actually having a reason to catch so many. I don’t fault anyone who chooses the other options, I just don’t find them to be as fun myself. Whichever way you choose to earn your Bells, have fun and share the wealth if you so desire, all of the animals on your island would love to receive some expensive gifts to show off in their homes!