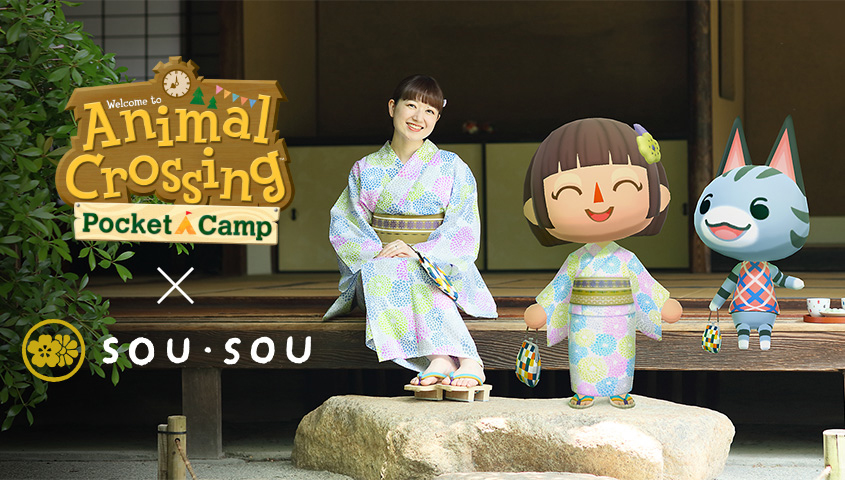 Summer festival season may be mostly canceled this year, but people have come up with clever online alternatives.

The yukata, geta and other accessories arrived at the end of July as part of the mobile game’s “Bamboo Bonanza!” August update, and will be available through Sept. 7.

Animal Crossing: Pocket Camp players can also buy real-life summer yukata similar to the ones worn in the game. According to Nintendo, the items will be available on Aug. 12, but SOU・SOU’s online store already has the items listed.

Some of the names are slightly different than their in-game counterparts, but “Fence” (in the online catalog) would seem to correspond with “Window-Frame” (in the game). “Letters” looks about the same as “Text.”

“Karen” is “Pretty” in the game. (Note: The name used on the website refers to the kanji meaning “cute,” “sweet” or “lovely,” and not the Western name.)

Like all wearable in-game items, the in-game yukata are unisex, but the real-life catalog items are labelled men’s or women’s.  A couple of the items are available only as kimono-sleeve shirt top, which are offered separately from the accompanying kimono pants.

You can also get geta, hairpins, purses, folding fans, and other wearable accessories from SOU・SOU.

The SOU・SOU Interior Collection will be available in-game and in the real-life catalog on Aug. 12.  (Some websites state Aug. 13 because of the time difference between the U.S. and Japan.)

Incidentally, Isabelle is also wearing a summer yukata during this month’s camp activities, but the pattern of her yukata doesn’t seem to match any of the SOU・SOU ones.

Older in-game summer yukata from 2018 and 2019 have also been reissued, but her outfit doesn’t quite match them, either.

In addition to the online catalog, there are also the brick-and-mortar flagship store in Kyoto, a branch in the Aoyama district of Tokyo, and a U.S. branch at the New People building in San Francisco’s Japantown.

According to their website, the company name comes from the Japanese phrase “sou sou,” or “yes, yes.”

The company’s U.S. website describes the brand as “modern and edgy” while “dedicated to preserving the best traditional techniques by using skilled craftspeople and time-tested materials.”