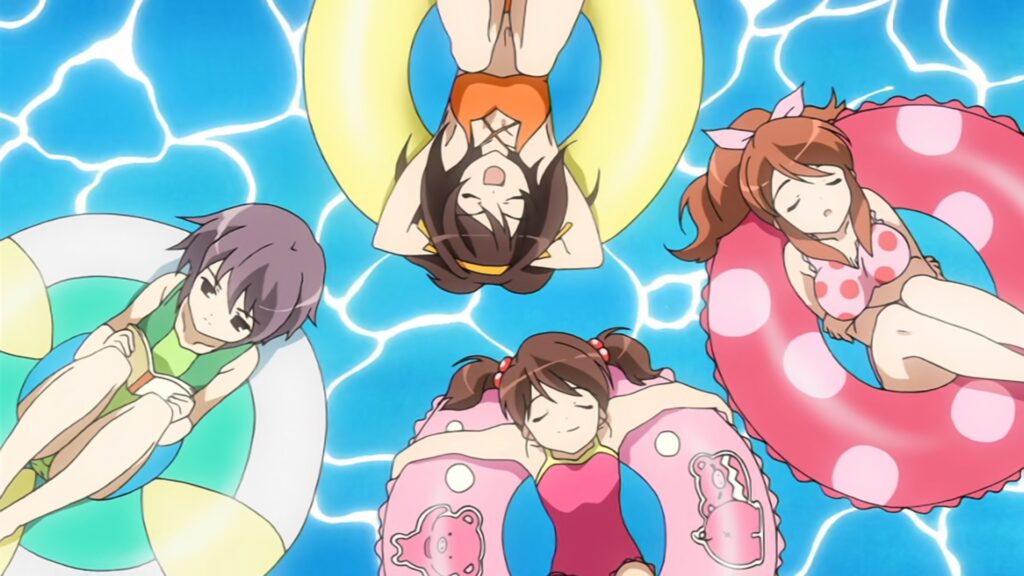 Ah, the beach. From The United States to France to Australia to Japan, it is a worldwide symbol of warm days, vacation time, relaxing and just generally having fun.

Except when you can’t go, because local officials have closed the beach. Or, even if it is open, it is way too crowded for comfort. Or… let’s face it, there are a lot of reasons why you may not be able to go to the beach even if you really want to go.

Thank goodness there’s always anime. For whatever reason, a lot of anime shows have beach episodes. Even action-packed shonen shows will often find a way to take a break and hit the beach. If you can’t get to the beach in person, here are the best anime beach episodes you won’t need sunscreen to enjoy: 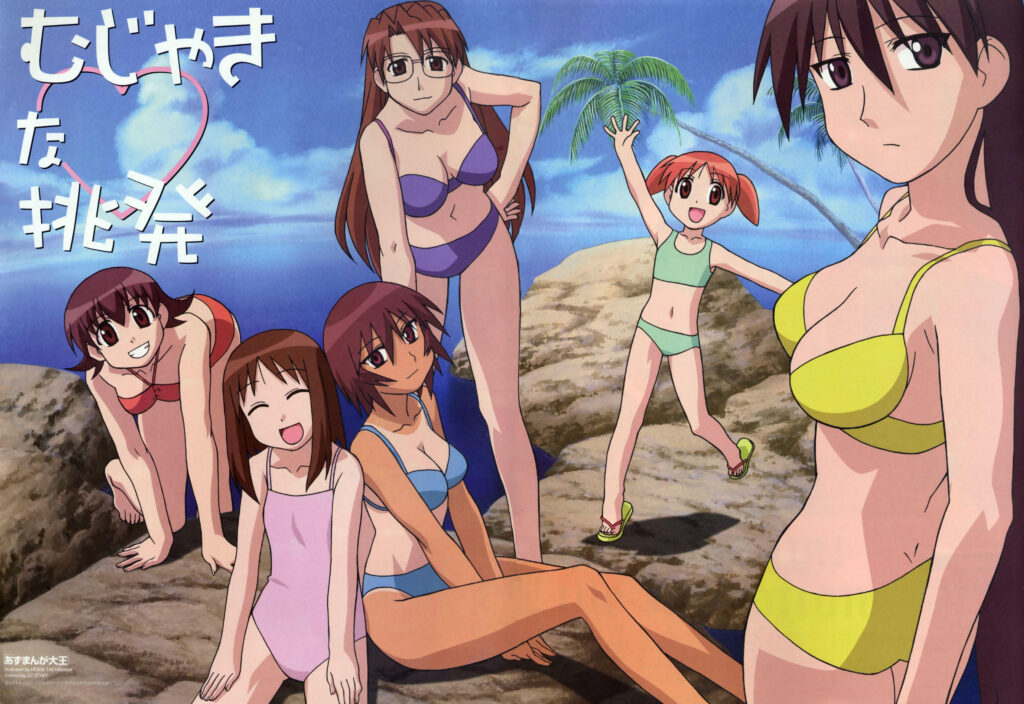 Naturally, a comedy series featuring high school girls would have a beach episode, and Azumanga Daioh has three of them: Episodes 5, 14, and 22.

All three feature the girls taking summer trips to Chiyo’s family beach home. They bring along their teachers, Yukari and Nyamo, presumably for adult supervision. Despite the repeated vacation theme, the show’s creators do manage to come up with enough unique plots, jokes, and gags for each episode.

In episode 5, Chiyo and Osaka get traumatized by the Yukarimobile. There are also good jokes involving horror stories, fireworks, and other summer cliches.

In episode 14, Osaka drifts out to sea while at the beach. They also go to a summer festival in their yukata. It’s another typical Japanese cultural activity, but it makes for an adorable scene.

Probably the funniest bit is when Nyamo gets seriously drunk. She then proceeds to tell the girls all about adult relationships. Of course, innocent Chiyo doesn’t get it, and the next morning, she asks Nyamo for help, who panics because she can’t remember what she said last night.

Episode 22 is supposed to be a study trip, but all the beach fun gets in the way. At the beach house, Osaka tries to wake up Yukari with a frying pan, except she picks up a deadly looking kitchen knife by mistake. The resulting chaos is one of the funnier scenes in the whole show. 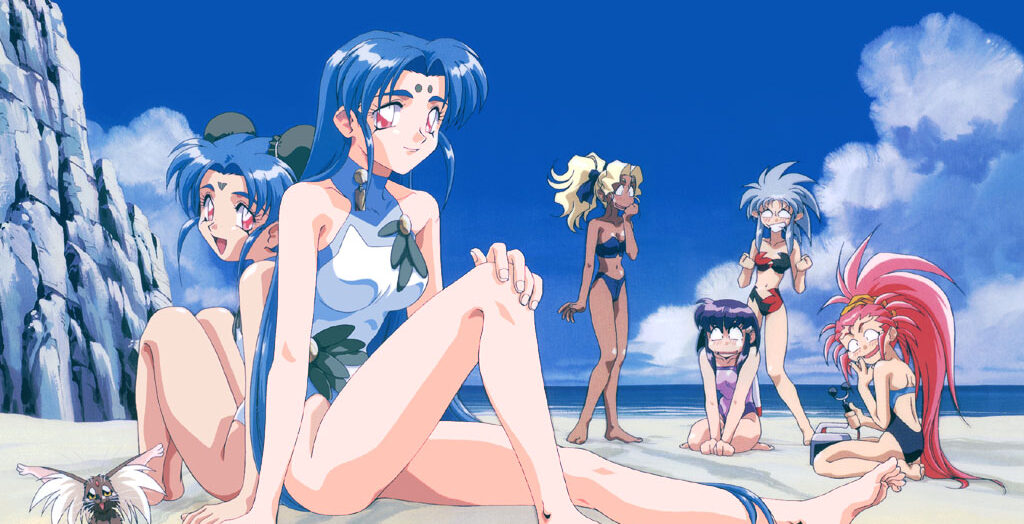 Tenchi Universe proves that even in outer space, there will be beach episodes as long as there’s an inhabitable planet with water.

Episode 20, No Need for Swimsuits, has the Tenchi gang running a snack shack at a beach resort on some distant planet. Somehow, the planet has Earth-like palm trees, as well as all the stuff you would expect at a typical tropical beach.

Ryoko creates the world’s largest shave ice, which she reluctantly shares with the others. Kiyone looks awesome as a lifeguard.

At the end of the episode, there is a swimsuit contest. Tenchi Muyo! is a harem comedy franchise, so Ryoko, Aeka, Mihoshi, Kiyone, and even the villainess Nagi get involved. Washu isn’t there, so the only girl who doesn’t get involved in the fanservice is young Sasami. 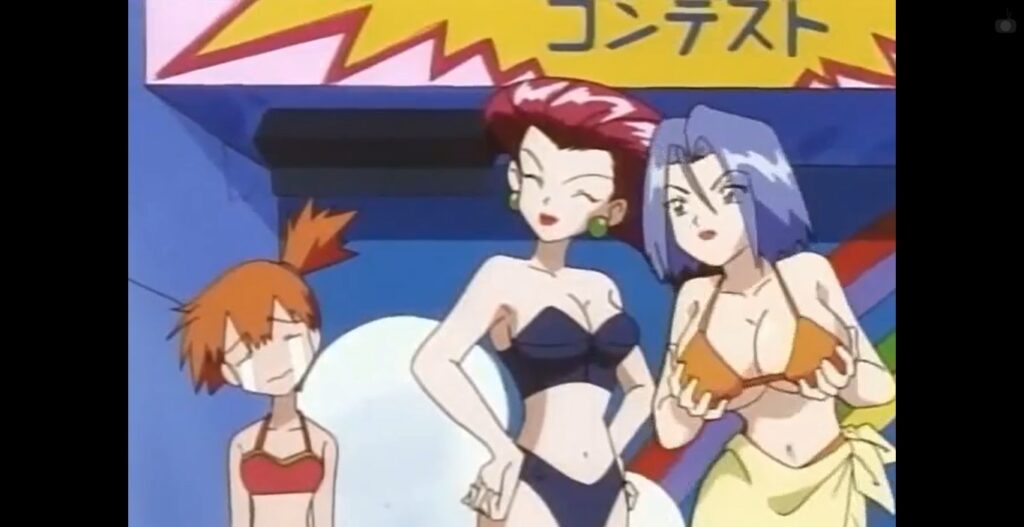 Pokémon has a ridiculous, and somewhat infamous beach episode, Beauty and the Beach. It’s episode 18 of the original series.

The episode is probably best known for the censorship. The scene in question is a swimsuit and Pokémon beauty contest. Misty is one of the contestants, and both Jessie and James of Team Rocket enter. James is in female disguise, and his disguise features an inflatable bikini.

The rest of the episode has something to do with a pair of rival beach restaurants, but nobody seems to remember that part.

The K-On! girls spend time at two of Mugi’s family beach homes in episodes 4 and 10 of season 1. (The episodes are creatively called Training Camp! and Another Training Camp!)

As the name implies, the first trip is supposed to be a training camp for the band, and Mio tries to get the others to be serious about it. But naturally there’s a lot of goofing off, including by Mio.

There’s a cute scene near the end where Mugi, Ritsu and Yui plan an impromptu concert for Mio. Yui happily playing guitar in the middle of flashy fireworks is quite a sight to behold.

Azusa joins the group for the second ‘training camp.’ Just like Mio, Azu-nyan also ends up having more fun than actual band practice. 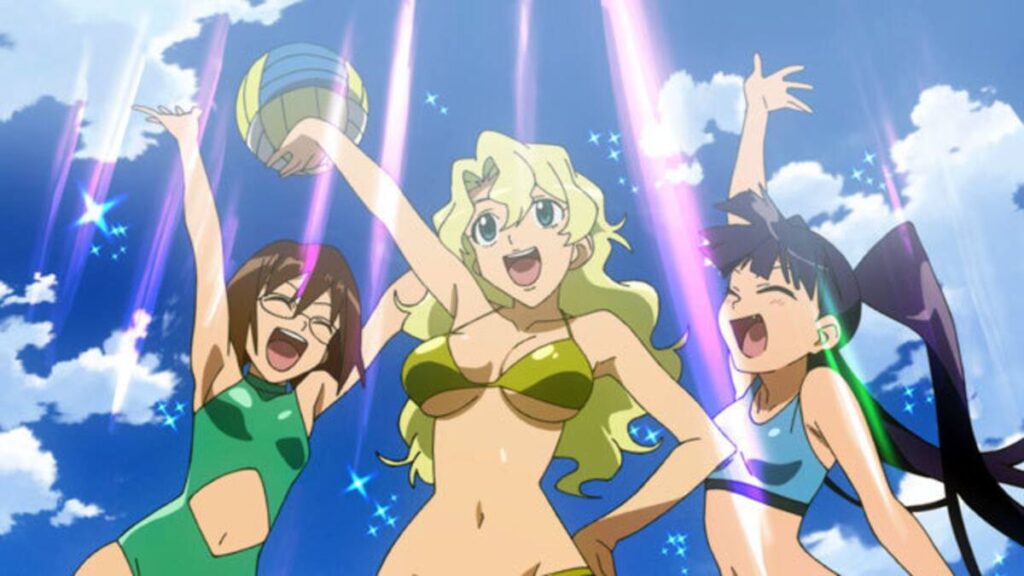 Tengen Toppa Gurren Lagann is full of references and tributes to classic anime series, plus the series is powered by sheer awesomeness. They also have a sexy main character who wears a fanservice bikini top all the time.

So, it makes sense that Gurren Lagann would have a beach episode. It was episode 12: Yoko, Will You Do Me A Favor? Somehow, Yoko’s beach wear manages to expose less than her normal outfit does. And she gets upstaged repeatedly by Nia. It’s surprisingly touching and you feel sorry for her.

Of course, the beach scene doesn’t last long before the show gets back to the usual craziness. In the end of the episode, the two girls reconcile.

The Melancholy of Haruhi Suzumiya’s beach episode is a two-parter, Remote Island Syndrome (episodes 9 and 10 of the first season).

The main thrust of the story arc is actually a murder mystery party, complete with a Phoenix Wright: Ace Attorney-inspired ‘courtroom’ scene. Haruhi does the classic ‘Objection!’ point, and slams her hands down on the table a lot. Koizumi shakes his head exactly like Miles Edgeworth.

What qualifies it as a beach episode is that there are scenes of Haruhi and Mikuru playing in the surf at the beach. Haruhi, Mikuru, and Kyon’s sister also ride a giant banana while being pulled by a jet ski.

Yuki reads while sitting on the beach, while floating in an inflatable beach toy, and even while water skiing. 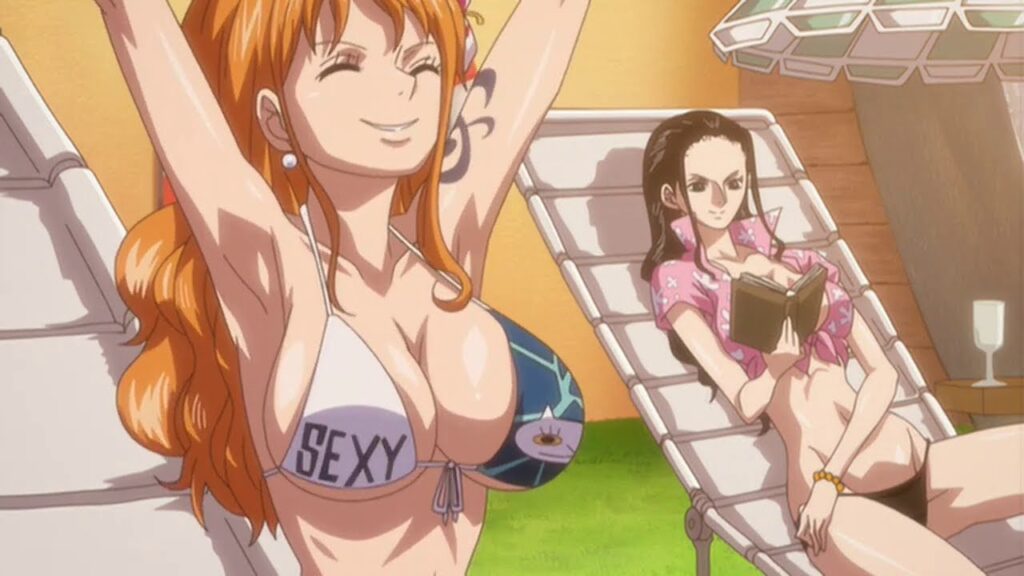 One Piece is an anime about pirates who sail around the Blue Sea, traveling from island to island in search of treasure, fun, and adventure. The Straw Hat Pirates also have Nami and Nico Robin, two women who look sexy in just about any outfit.

So all things considered, they must have a bunch of beach episodes, right?

Well, no, actually. Some of the series’ opening theme songs feature beach scenes. But, One Piece actually has surprisingly few beach episodes.

At the end of Thriller Bark, there is a short filler story arc which could be considered a beach episode of sorts. In episodes 382 and 383, the crew takes a vacation at a tropical island spa resort. The resort seems to have everything you would want for a beach vacation: a lot of water to swim in, beach umbrellas, palm trees, bikinis, people serving tropical drinks. Everything but an actual sandy beach.

Even on vacation, the Straw Hats can’t avoid adventure. This one involves a ‘treasure’ and the return of a previous villain. In the end, the resort ends up falling apart. 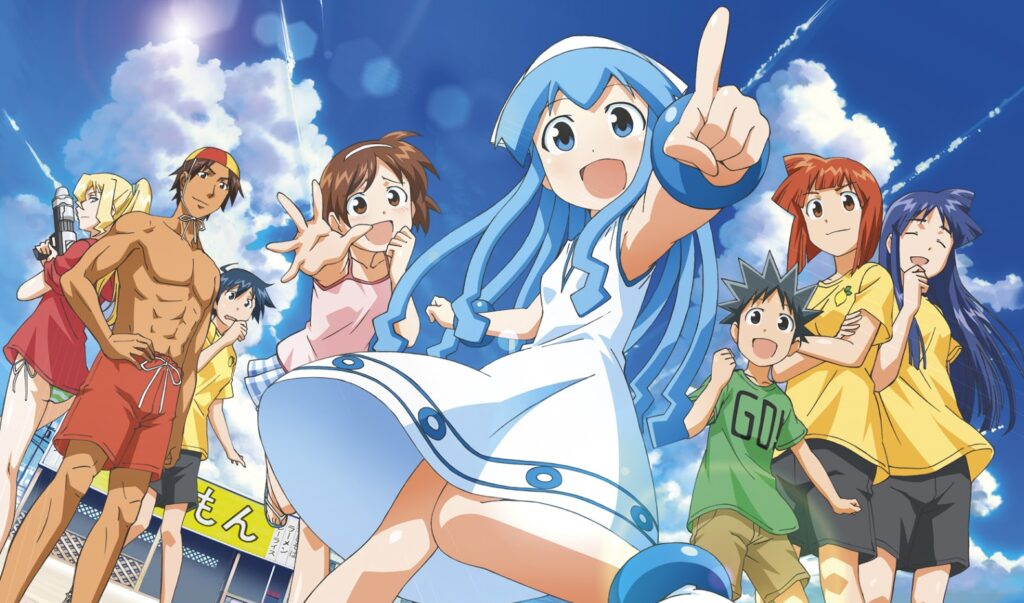 Technically, just about every episode of this squid-tastic series is a beach episode, since most of the action takes place at a beachside snack shack in Yuigahama, Kamakura. One of the main characters even surfs.

Regardless, Ika Musume (Squid Girl) is a good, fun comedy series with a lot of goofy characters, cute girls, and a lot of heart. If you want some laughs, pick any episode; you won’t be disappointed.