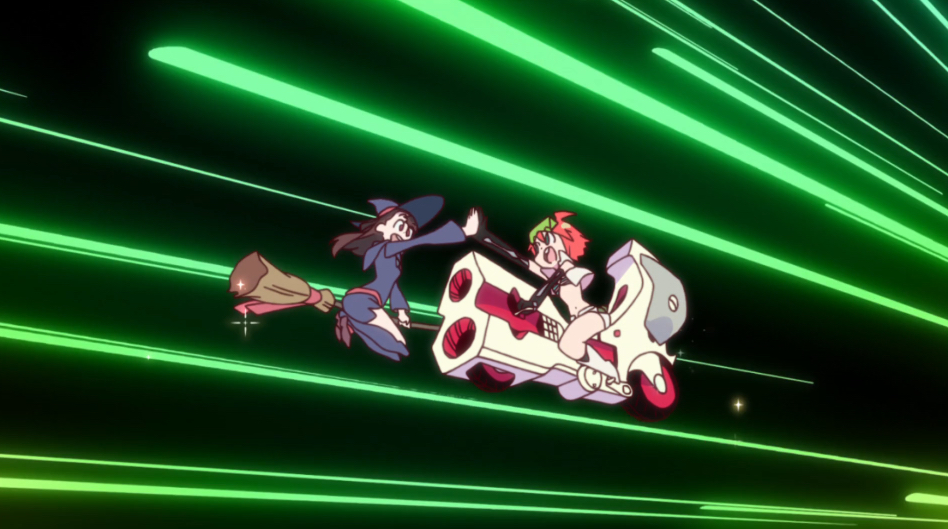 Crossovers have long been a popular concept in fiction.

The basic idea is simple enough. Take two (or more) characters from two separate fictional universes and have them meet.

Will they be friends? Will they team up? Or will they fight? Which one is stronger, smarter, more skilled, or faster?

Crossovers can be serious, silly, cute, or just plain weird and strange, but they are frequently interesting.

Naturally, anime and manga series are not immune to the appeal of the crossover.

Before we look at anime crossovers, we need to acknowledge some “rules” which crossovers tend to follow:

Keeping that in mind, let’s look at a few good anime crossovers:

This wonderful combination of cute, sweet, weird, action, and comedy was one of the first anime shows to come out of Studio Trigger. Appropriately, it contained several crossovers which highlighted the new studio.

Space Patrol Luluco came out after Kill La Kill, but before Little Witch Academia.  While out on her adventures, Luluco visited planets which were clearly based off of each of these anime series.

Inferno Cop also has a crossover — Chief Over Justice is clearly meant to be a parody or tribute to Inferno Cop.  This connection is confirmed when the real Inferno Cop shows up later.

This series is extremely Gainax-ish, with wild animation, an over-the-top plot, and generally fueled by huge amounts of pure awesome.

However, these crossovers suggested that the new studio was more than just a spin-off of Gainax.  With Space Patrol Luluco, Trigger created a whole Trigger-verse, where different anime franchises are just a planet away. 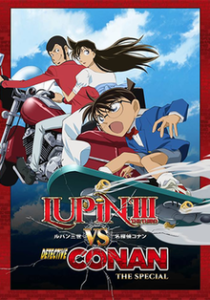 Take a great thief and a great detective, and you should have a pretty good combination, right?

The first was a 2009 movie-length television special. This was followed by an actual movie in 2013.

Both have the same title, except for the addition of “The Movie” to the sequel, so be cautious if you want to watch them “in the right order.” This little mini-review is based on the 2009 TV special.

As is often the case with “X versus Y” crossovers, the two main heroes take a while to realize that they are actually on the same side.

For one thing, Lupin’s thieving ways don’t sit well with the boy detective. If you applied typical Dungeons & Dragons character alignment, Lupin would be a Chaotic Good at best. Conan is definitely Lawful Good.

For another thing, many of the characters don’t actually meet up until the middle of the story.  When they do meet up, there’s a lot of comedy and hijinks.

The main story tells about a princess who has a “princess and the pauper” relationship with Ran Mouri from the Detective Conan series. Conan must also solve a murder mystery.

Meanwhile, Lupin and Jigen are planning a heist of some royal jewels.

Jigen also befriends Conan through a silly fake father-son thing, which is annoying and awkward for both of them.

Fujiko technically kidnaps the princess, although for most of the story it’s just two girls out to have a good time.

Overall, Lupin III vs. Detective Conan is a funny adventure story, if perhaps a bit too light-hearted for a Conan story.

To give you some idea of the comedy and jokes, Lupin wears red — just like he does in the lighter, sillier “Red Jacket” series.

It’s rather ridiculous to think that Kadokawa has enough isekai series characters to fill an entire high school classroom. But here we are.

The four franchises that they parody in this series are Saga of Tanya the Evil, KonoSuba, Overlord, and Re:Zero. The Rising of the Shield Hero joins in the second season.

The other isekai series are more dark and serious, so it’s fun to see them in a farcical setting. All of the characters are chibi-sized, so we get to see a goofy, chibi skeletal Ainz.

If you think about it, the series is sort of an anti-isekai. It features fantasy characters stuck at a high school.

Rather than normal people stuck in a fantasy world, these fantasy world characters are required to participate in the stereotypical “normal” school activities — classes, athletics, and other school events.

We also learn that Subaru and Kazuma are essentially the same character.

Akira Toriyama’s best well-known series have crossed paths on several occasions. All of the crossovers have been fun.

Although they are both Toriyama classics, the two shows aren’t really that much alike. Dr. Slump is pure comedy, featuring the cartoonish hijinks of a naive little robot girl.

Dragon Ball starts out as somewhat comical, but it quickly develops into an action-adventure, martial arts shonen series.

Blue quickly learns that this little girl is no pushover.

Arale makes a couple of appearances in Dragon Ball Super. One is a brief cameo. Goku has grown up, but Arale is still the same age as before.

In her most recent Dragon Ball Super appearance, she beats the snot out of Vegeta. (To be fair, Vegeta gets in a few good shots as well.) She also holds her own against Goku. It’s a silly episode, and Vegeta even breaks the Fourth Wall.