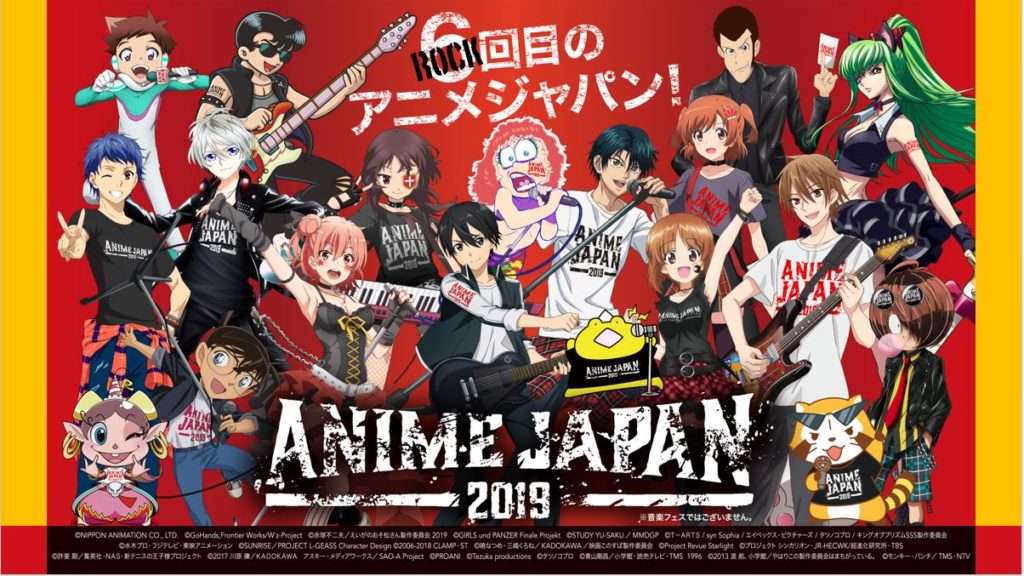 AnimeJapan is quickly becoming one of the most important events in any otaku’s calendar, taking its place next to giants such as the bi-annual Comic Market. Its focus on exclusive announcements as well as providing a place for people to express their fandom has filled a niche in the Japanese cultural landscape ever since it’s formation six years ago. Last year I had a lot of fun covering the various events and happenings at the two-day celebration, so I was pretty excited to see the AnimeJapan start its promotion for this year’s event in revealing the new ‘theme’ via a new key visual. Check it out below:

This year’s theme will be that of ‘rock,’ and regarding the theme, AnimeJapan put out a rather lengthy statement on their website by way of explanation:

“Not as special as the 5th anniversary, and still a year before the Olympics.

The task of coming up with a theme for this year seemed difficult, but one thing we were certain of was that this edition will most likely be bigger than ever.

This is undoubtedly all thanks to our valued attendees, sponsors, and exhibitors.

We would like to take this opportunity to express our heartfelt gratitude.

It is thanks to all of all the challenges, experiences, and opinions of everyone involved, that we were able to build AnimeJapan into what it is today.

That, however, is exactly why we cannot simply follow in our own footsteps. We would rather break the mold!!

When such feelings in mind, we return back to the theme we spoke of.

Now then, this will be the final AnimeJapan of the Heisei era!

Let us all get excited!!” – AnimeJapan Organization, Executive Producers

So while the idea for the ‘rock’ theme might have come from a pun, the organizers have clearly put in a lot of thought into how they should approach this year’s event. As they highlight, this event will be the last of the Heisei era, so it needs to see out the old era with a bang. But at the same time, topping the fifth-anniversary celebrations of last year seems like an impossible task. Hopefully, this theme will allow the event to continue evolving beyond its peak last year, through the power of rock.

In accordance with the theme, AnimeJapan has announced that there will be ‘rock’ themed goods this year. But I wouldn’t be so sure of the theme’s importance. In the part, the event’s key visual has had little effect on the actual happenings of the event. That being said, I really do hope that they sell some of the designs the characters are wearing, especially Megumin’s black t-shirt and Kitarou’s sunglasses.

What’s more interesting is how the line-up of characters has changed. AnimeJapan changes it’s line up every year more or less in line with what is currently airing, which is why such characters as Emilia from Re;ZERO and Ruler from Fate/Apocrypha are not present in this year’s key visual. For reference, here is last year’s: 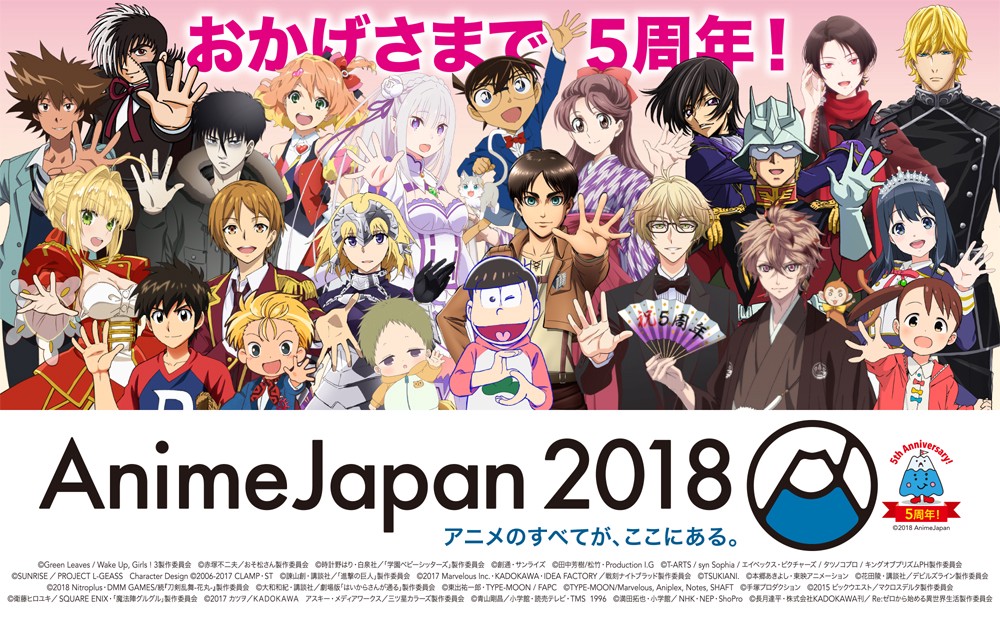 Conversely, the position of characters in the visual usually reflects how important the event views their respective series. Given that, it’s no wonder that Kirito from Sword Art Online is front and center this year, along with Konosuba’s Megumin and one of the sextuplets from Osomatsu-san (I can’t tell for the life of me who it is under the drag). I wouldn’t be surprised if these series’ stage events end up being some of the most important in this year’s schedule as well.

With the new key visual unveiled, no doubt marketing for the event will begin in earnest. Some events for this year have already been confirmed, such as the return of the “Manga we want to see animated” fan ranking. Like last year, the event will take place in Big Sight over two days from March 23 to 24. Check out the official website for more information.