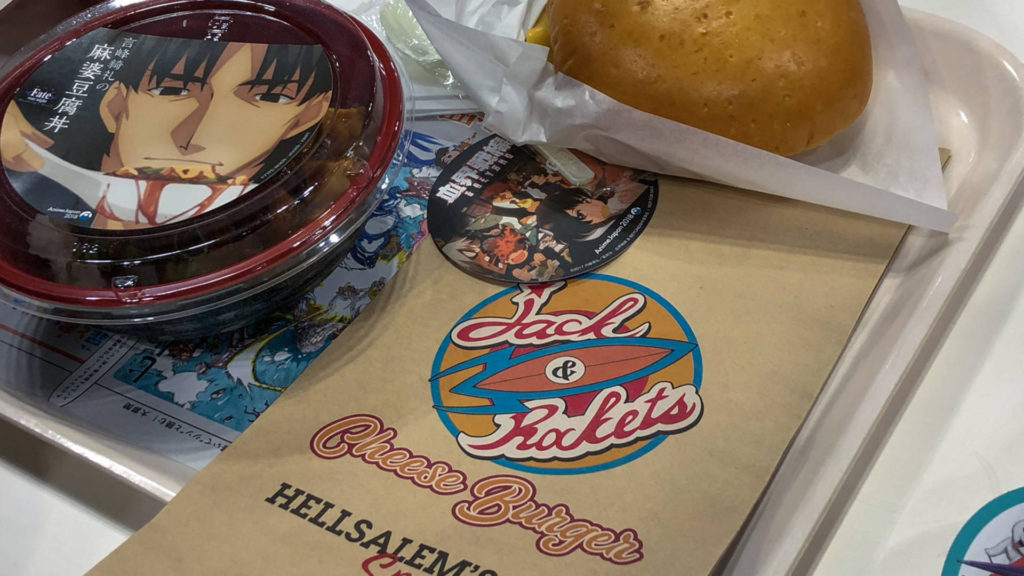 Beyond the panels, the stalls, and the cosplay of AnimeJapan 2018, there existed another mysterious frontier that writers Mike and Jacob set out to discover. That frontier was the collaboration food menu, of which they were able to try five of six (the last one was miso ramen from sword boy series Touken Ranbu). Below is a short review of the food itself, with which they hope to tantalize our reader’s taste buds and inspire their imaginations.

Editors Note: The two writers in question are nefarious for having poor, uneducated opinions on food; this is especially showcased by their unfortunate favoring of GoGo Curry over the superior CoCo Ichibanya Curry. Take everything said below with a grain of salt. Let’s open this with a question; how many Matsuno brothers does it take to make a single curry rice? Surely it had to be the combined efforts of all six, especially given the surprising taste offered here. I’m pleased to offer props to whoever served this classic Japanese curry rice dish with a pleasant helping of cheese to boot. Upon opening the lid, just a bit of steam rose to flow through my nostrils. It wasn’t overly-hot in actual temperature, but the sauce itself pleasantly-surprised with a bit of a kick. If you’ve ever had a savory Japanese curry before, there really isn’t too much else to write home about, but man, the combination of a meaty roux and a rather unorthodox topping was delightful in a familiar, comfortable sort of way. I can’t help but wonder though; if these NEETballs were just a little more active and had some sort of stable job, would they have been a lot more tender and juicy? Wielding this mighty churro in my hand made me feel powerful; well, at least to the extent that either a wooden “bokken” sword or a chocolate and cinnamon-covered churro could actually make me feel. Wrapped in a delightful paper sleeve resembling Gintoki’s iconic outfit, I knew that I was about to slice any lingering pangs of hunger in two. Out of my selections, this was the easiest to award a near-flawless enjoyment score to, because it seems really hard to mess up a churro. If we replaced all weapons with the likes of these, I imagine that we’d attain world peace real quick.

I must profess that I haven’t watched or read Kekkai Sensen yet, but the thought of a good cheeseburger was too powerful for me to resist. I’m sure that a lot of the references contained within the dish were therefore wasted on me, but I can definitely comment on the quality of the food. What I first noticed was that the cheeseburger was only lukewarm, which immediately put me off once I picked it up. I have a real disdain for lukewarm dishes and have sent back food many times in restaurants because of this, so this was initially affronted. I’m happy to report, however, that the quality of what was sandwiched between those buns was very pleasing. Two slices of firm cheese paired well with the soft texture of the patty, which initially panicked me as I wondered what meat it might be made out of, but it soon won me over. Another boon to the appeal of this burger was the subtle-yet-effective relish spread on the lower bun, which again added another dimension to the patty. Overall, I would definitely take up another opportunity to taste the Hellsalem’s Lot Special burger once more, and perhaps next time I’ll actually be able to understand the references. (Jacob Parker-Dalton) Sandwiches tend to be a classic choice because they can be quite effectively filling. If you’re crafty enough, you can even include all of the essential food groups into the meal — heaps of vegetables and proteins snugly fit between to slices of processed carbs. I’m sad to report that the Rabbit House’s Sandwiches achieved none of the goals a typical sandwich can hit and that it was easily the most disappointing thing between both mine and Jacob’s dishes. Maybe it was simply missing a chaser in the form of some lovely coffee brewed at the hands of some impossibly-cute anime waitresses, but if this was the only thing I would have ordered, I would probably be able to fill a mug with my own tears. Appearances can be deceiving — it may look like these sandwich slices are of typical width and height, but each slice of bread was honestly no larger than that of my index finger. Coupled with some paltry slices of ham and cheese, a meager amount of potato salad, and a barely-there presence of ketchup and omelet, and the only redeeming quality to this dish being the cute strawberry wrapping paper. Mapo tofu is one of my favorite dishes in the world, and so even though I’ve fallen out of love with the Fate series as of recently, I couldn’t help but enjoy this. Tofu can be a hard nut to crack, as you have to take care in ensuring that the tofu isn’t too hard or too soft. Ideally, it should melt in the mouth and provide only a slight hint of its existence within the dish. In turn, I’m happy to say that the collaboration mapo tofu-don was able to achieve this. Pair this ideal consistency with a spicy-yet-tasty sauce that pairs brilliantly with the tofu, and you’re on to a winner. Further adding to the experience was that the dish is based on one of my favorite moments in the Fate series – Kirei’s encounter with Shirou whilst eating incredibly spicy mapo tofu in Heaven’s feel. To further get in the Fate collaboration mood, for those who wanted to emulate Kirei’s profuse sweating during that encounter, an extra sachet of spice was also provided. But, the dish was spicy enough for a mapo tofu lover like me without adding that extra spice. I’d be happy to eat Kirei’s tofu once more, anytime. (Jacob Parker-Dalton)