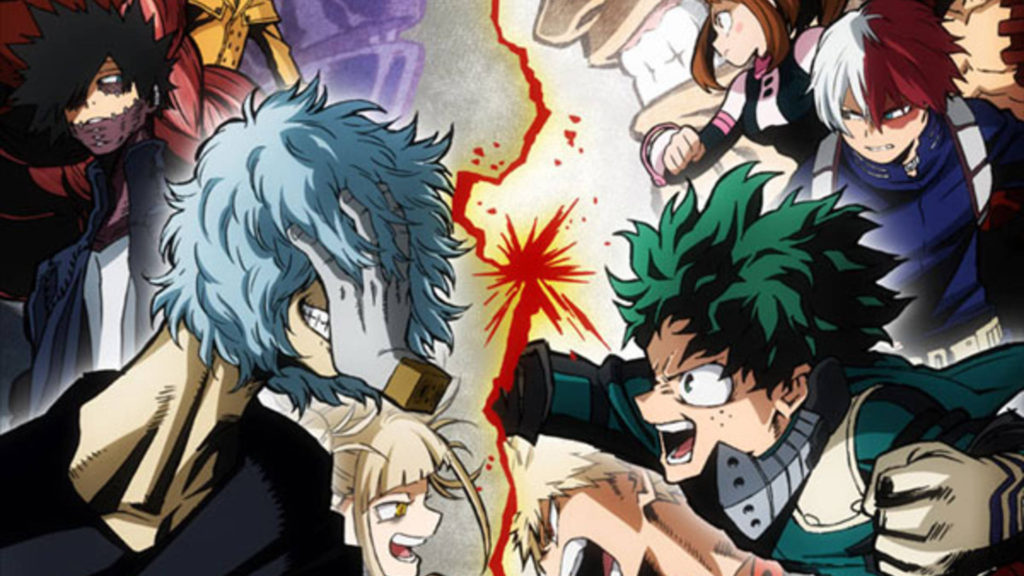 As the smash hit My Hero Academia heads into its third season, voice actors for both heroes and villains alike took to the stage today at AnimeJapan to talk about the new series today. Opening the show was a rousing performance from character Deku, All Might, Bakugo and Uraraka, who appeared on stage in outlandish mascot character form. These same costumes had been seen on the event floor previously in front of the Toho Animation booth, though they still managed to catch us off-guard.

Daiki Yamashita (Midoriya Izuku), Nobuhiko Okamoto (Bakugo Katsuki), Ayane Sakura (Ochaka Uraraka) were present on stage, with Kaito Ishikawa (Tenya Iida) taking charge of the proceedings – very much in line with his class representative character in the show. Then – to the heroes’ surprise – the League of Villains stormed the stage, with Kouki Uchiyama (Tomura Shigaraki), Misato Fukuen (Himiko Toga), and Hiro Shimono (Debi) arriving to crash the party.

“Villains will be what makes this third season so unique,”

said Uchiyama. Up until this point, they had not yet appeared as the fully consolidated League of Villains, which only formed at the end of the series’ second season. “Adding villains to the mix will make for a vastly different experience,” the voice actors affirmed.

In performing the roles of the villains, the voice actors were also confronted with several problems. When Uchiyama first saw the Tomura’s design – covered in hands – he was at first shocked, and then struggled to gauge what emotion he should be expressing, since Tomura’s expression is always hidden. In the same vein, Toga’s voice actor struggled at first to be menacing in her performances, which is not surprising given her previous work in the relatively cutesy Rosario + Vampire and Sailor Moon Crystal.

Furthermore, Shimono had to work hard in lowering the volume of his voice to become more menacing, since he is usually portrayed as a louder individual. This certainly came across during the event as well; whenever he talked he would stand up and make his way to the front of the stage, while the other voice actors remained calmly seated. Once Yamashita and Okamoto pointed this out, it also became a running joke and brought great amusement to both the audience and cast members alike.

Not only will the villains constitute new horizons for the series, but the cast also promised that we will also see new sides to the students themselves. Yamashita pointed out that, in the previous series, the teachers were always able to save the students, but hinted that this time the students will be on their own. Although it’ll be sad to see the potential absence of such great characters as Aizawa and All Might, it is reassuring to see that both the cast and production team are working hard to keep the series fresh and moving in new directions.

What will make this new series even fresher, the cast added, is the rising tensions that will take place during the events of Season Three. They observed that, with each series, the stakes have been raised higher and higher, and that won’t be changing this time either, in order to “go beyond.” The fact that the villains will appear and that the students won’t be helped by the teachers will likely only add to this.

Finally, the discussion moved towards the movie, which will release on August 3 and is titled My Hero Academia: The Two Heroes. A new key visual was released, showcasing the title and release date, but also a striking image of the main cast – Deku, Bakugo, Todoroki, Uraraka, and Iida – as well as an interesting tagline in “Who is your hero.” Further intriguing is the image of what seems to be a young All Might within the tagline, suggesting that the film will delve into his backstory before he became a teacher at UA. What’s more is that the cast revealed that the series will take place “overseas” and feature the students and All Might operating during a “huge catastrophe” in order to save a new character. Many questions still remain as to the nature of the film, but this visual does intrigue me as an My Hero Academia fan. Set to release August 3, 2018, in Japan, there’s definitely a lot to get excited about. The cast seems keen to continue in pushing the series further and not rest on their laurels, and I hope that this reflects the quality of the upcoming season. I’ll be eagerly awaiting the April 7 start for the third season, as well as more information on the movie.