A Review on Pom Poko: A Ballsy Environmental Allegory 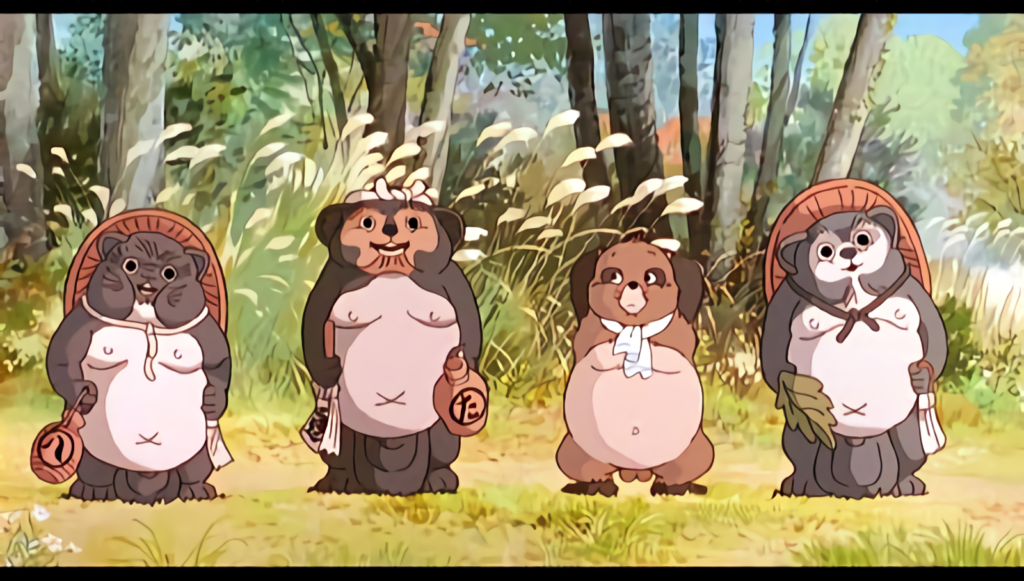 When most people think of Studio Ghibli, they think of films like Howl’s Moving Castle, My Neighbor Totoro, or Spirited Away. Even though it is from the same studio, Pom Poko is not counted as a common favorite among the masses. While it lacks the whimsical scenes like the ones from Howl’s Moving Castle or Kiki’s Delivery Service, Pom Poko tells a chilling story of eco-terrorism that we can all learn from.

Pom Poko was directed by Isao Takahata who was known for directing Grave of the Fireflies, The Tale of Princess Kaguya, and many more films. The film was released in 1994 to much critical acclaim, and it was nominated for best picture. However, Lion King also came out that year and blew the competition away.

While Lion King follows Simba and his Hamlet inspired tale, Pom Poko tells a more relatable story that involves the environment and displacement, a tale a lot of people can relate to when it comes to cities wanting to expand and which leads to the removal of people from their homes.

In this case, Pom Poko is in a similar vein as it follows a clan of tanuki who are displaced from their home for the development of apartments.

However, the film isn’t without it whimsy as the film stays true to Japanese folklore.

In the tales, the tanuki are depicted as mischievous, a bit gullible, and have the ability to shapeshift. They are also very easily distracted and lazy. This is all reflected in the film and pays homage to the tanuki in many ways; one of these ways is in the title of the film. The name Pom Poko comes from the sound of drumming tanuki bellies.

Before you start to wonder, allow me to answer your question: Yes, their testicles are shown in the film since they are used when the tanuki transform and are an important part of their folklore. In the English dub, they are referred to as ‘raccoon pouches’.

The film begins in the 1960’s with the tanuki living in harmony with a nearby farm in the Tama Hills. The tanuki would eat the animals around the farm and the food that was on the ground; they never took from the humans. They marked it as a symbol of pride in where they were able to live in harmony with humans. When the people who owned the farm left, the tanuki moved into the farm until new development started on that land.

Bulldozers, excavators, and loaders come on the land and begin tearing down the farmland. This leads to the displacement of the tanuki, but it also leads to a food shortage. This leads the tanuki to create gangs and fights for food begin amongst themselves which leads to bloodshed amongst the clan. A tanuki eventually ends these needless battles and proposes a plan to fight back against the development by using their transformation skills and infiltrating the human world to learn more about them.

This proves to be difficult for the tanuki, as they have trouble focusing on their tasks and completing them. However, after a long, arduous training regime, they are successful and begin scaring the humans in the development sites. As a result, the people of Tokyo begin to believe that the hills are haunted due to them angering the spirits.

This causes the development to be postponed several times, and most of the tanuki are happy. One of the tanukis is not pleased with the results and pushes for a more violent approach, but the tanukis refuse to be violent. As they continued with their harmless pranks, one of them did go too far and ended up killing some humans, but they were easily replaced and construction continued.

Seeing that their non-violent plan wasn’t working, they sent out tanukis to seek help from elder tanukis in faraway regions. The elders take years to arrive, but when the elders do arrive, they suggest showing the humans that their town is haunted in an attempt to scare them off. This backfires on them and a theme park takes credit for the festivities.

Some of the tanukis became disheartened, others became angry, many just gave up, and others remained firm in their stance to be peaceful even after the events. As a result, the tanuki split into four factions: eco-terrorists, cult members, tanuki who think about living amongst humans, and tanuki who want to bring awareness about the destruction through peaceful means. Each group meets a different fate.

The cult leader decides that he’s tired of living, transforms into a ship, and sails to the afterlife taking the members of his cult with him. The other factions get to work. The eco-terrorists are all killed in a standoff with the riot police. The tanuki who think about living among humans meets with a kitsune, who has already merged within society and learn about what they need to do to successfully transition.

The tanuki stage one final plea to stop the urbanization of their homes by showing the town what has been lost. This allows the tanuki to make their plea to the humans to stop destroying their homes. This works, and humans begin to talk about making space for the animals with parks.

Of course, this all comes too late, as the construction project is well underway. The tanuki continue to struggle to live the lives they used to. As a result, the transforming tanukis decide to live amongst humans to allow the other tanukis a chance at survival. At the end of the film, a tanuki asks the audience to think about the living spaces of the animals that are in their areas, ending the film on a reflective note. 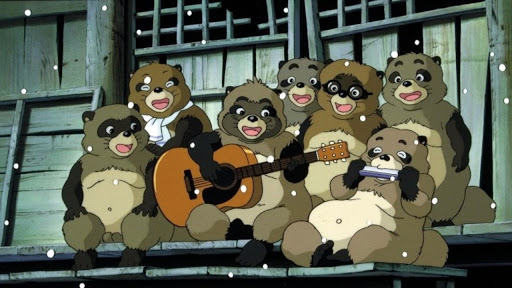 Pom Poko has all of the notable elements of a Ghibli film: a great story, beautiful imagery, and fun characters. This film does tone down the usual Ghibli whimsical shots for this film to show the results of deforestation which makes it much more real than fictional. However, the film still inserts the whimsical shots when appropriate.

Studio Ghibli is famous for embedding messages about preserving the environment in their films. This film is one of the more literal approaches to it as it tells this story directly from those who are most affected by the events of the film. Even though Pom Poko was made about 20 years ago, it’s message still rings true to this day especially where more and more green areas are turned into concrete jungles.

Watching this film in 2020 only reminds me that little to nothing is being done in terms of protecting the environment, which made the film melancholic for me. I found myself saddened by the ending, knowing that it is rooted in reality and that our reality is far much worse.

This doesn’t mean it’s a bad movie. It’s an excellent film, a solid 5 out of 5, and it takes the proper care of showing the effects of deforestation and how it affects the environment. Everyone can learn from watching this film when it comes to taking care of the planet.

Where to Watch It

Given that it is a Studio Ghibli film, it is not too hard to find a copy of the film. Pom Poko is available to watch on Youtube, Prime Video, Vudu, and Google Play for $12.  You can also buy the film online through GKIDS, Amazon, or a local retailer like Target. If you live in the UK, it is also on Netflix.