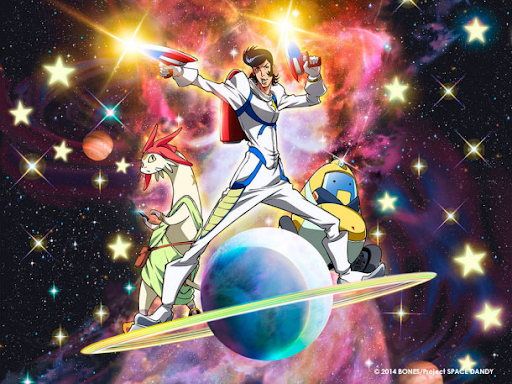 One of the greatest anime crimes to take place post-2014 was an utter lack of follow-up to the sci-fi masterpiece that is Bones’ Space Dandy (2014). I know, I know. That isn’t technically true, but for a series as cool as Space Dandy, fans demand, no, need, more than a measly two thirteen-episode seasons.

And don’t even get me started on the English dub for this show…(It’s spectacular.)

This writer could not recommend watching the entirety of Space Dandy more than she already has, but should you want a sampler of the Aloha Oe crew’s shenanigans before fully committing, or are pressed for time (I get it, so much Adult Swim, Crunchyroll, and Netflix, too little time), these are the episodes you should check out first.

I also recommend that those fluent in English watch the English dub as Dandy’s voice actor Ian Sinclair is absolutely amazing and a lot of anime comedy tends to resonate more with viewers via localization (i.e the ad-libbing and overall vocal performances “hit harder” in English).

Which Episodes Should I Check Out, Baby? 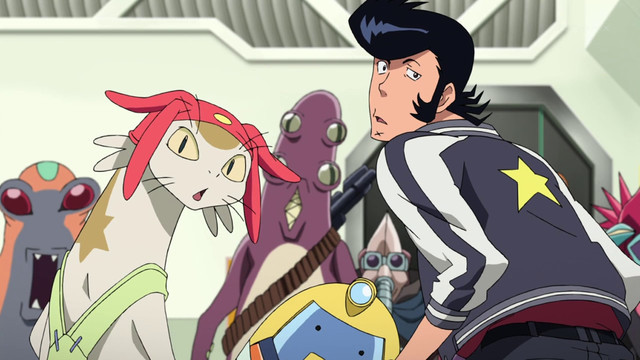 I, of course, had to add Space Dandy’s pilot to this list. Not only is it our introduction to Aloha Oe alien bounty hunters/crew members Dandy and QT, but it’s the one where their ragtag group is made complete with a third member.

While taking a detour at Dandy’s favorite space “Hooters,” Dandy and robot companion QT mistake cat-like alien Meow for a new species and shenanigans ensue. Once said misunderstanding is cleared up, the trio sets off to a different universe to find a real rare creature (which becomes somewhat of a running gag in a show without continuity).

“A Merry Companion Is a Wagon in Space, Baby” (Season 1, Episode 5)

I have a weakness for father-daughter narratives. I also have a weakness for Dandy showcasing his less hefty reward and women-crazed side. “A Merry Companion” brings both together for a charming story in which Dandy, ever quick on his feet, decides to help the crew’s target as of the episode, a rare alien girl named Adélie, find her missing grandfather. In my opinion, “A Merry Companion” is one of the more cinematic episodes of Space Dandy that manages to balance cute little moments, comedy, and drama in a short amount of time. On a related note, I would love to see an older Adélie return in a hypothetical Season 3 even if that should go against the anime’s one-off style.

This episode made me laugh harder than that of any other series in general. The premise is simple. Team Aloha Oe enters a Grand Prix-esque space race hoping to show up the bishounen champion Prince and his smug crew. Needless to say, hilarity ensues. This was one of many scenarios in which Space Dandy explores characters paralleling each other through mere coincidence. If not a coincidence, the show’s substance tends to come from alternate universes, inexplicable doppelgangers, and well-worn tropes.

Despite Space Dandy being an ensemble type of deal, it’s nice to see the crew member with brain cells get his own episode. It ain’t easy being the moral center of one’s group of friends as well as the “smart one,” but QT manages for the most part. When it seems like his life will remain just that, a life devoid of “true” emotion, a series of ups and downs (no thanks to Dandy and Meow), the cleaner finds a newfound sense of peace in a ladybot working at a coffee shop.

As a fan of select mecha and Transformers, the comical, but no less dramatic ending to this episode really was my cup of tea.

While most Space Dandy episodes are pure comedy, I think it could serve the show well to further delve into alien species/robot humor and relations in a hypothetical Season 3.

Remember when I mentioned alternate universes and doppelgangers? Well, this episode is a smorgasbord of creativity, fanfiction fuel, and references if not the smorgasbord. You’ll just have to watch it to see what I mean.

Do you fancy yourself a fan of musicals? Then, you’ll love this episode. As the episode title implies, Dandy goes undercover in order to find his new target at a high school. Upon failing to fit in with the cool kids, our hero instead decides to help the nerds find their voice.

Not to mention prom’s tomorrow!

Grease and Highschool Musical ain’t got nothing on the cringe-inducing, yet endearing performances are strewn at the beginning and end of “The Transfer Student.”

This may be my favorite Space Dandy episode of all time, not necessarily because of its brand of humor, but because its serious rom-com vibes are off the charts.

One of the characters I’ve failed to mention until now is Dandy’s boss Scarlet. Scarlet is front and center in this episode, the normally competent and stoic woman enlisting the help of Dandy so as to get a pushy ex off her back.

Despite Space Dandy’s lack of “hard” continuity, Dandy and Scarlet’s dynamic remains fairly consistent. Dandy sees his boss as a bit of a drag, but is nonetheless attracted to and impressed by her. Scarlet has little patience for our hero’s nonsense, but as “Lovers Are Trendy” proves, they have much more in common (and chemistry) than they initially think.