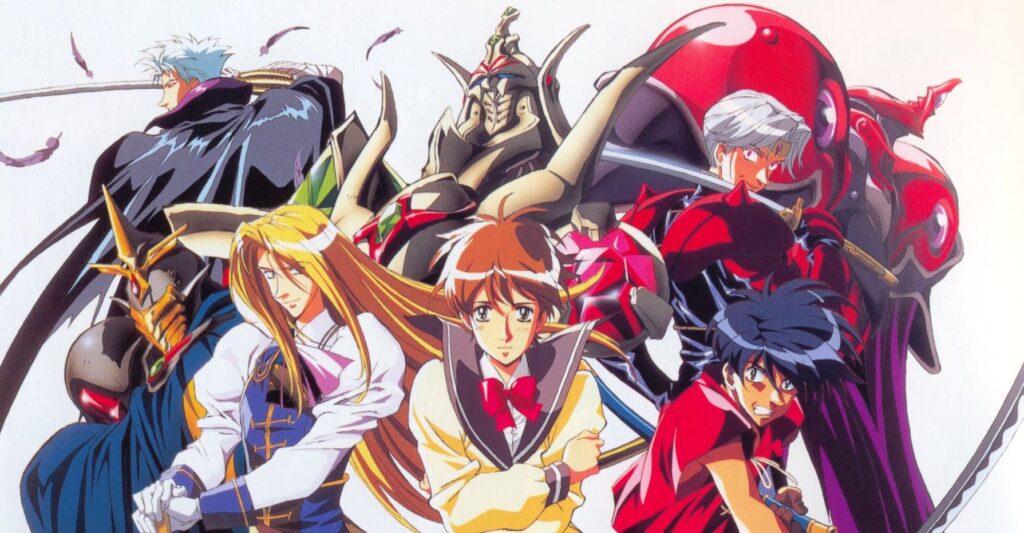 The Vision Of Escaflowne. The title alone should inspire wonder and mystique if you haven’t seen or conjure imagery of, arguably, the most gorgeous fantastical world anime ever had to offer. 1996’s Escaflowne has remained such a mainstay for the old-school over the years, that when fans had a chance to kickstart a new dub for a Blu-ray release of it a few years back, they paid-up to the tune of $318,000 out of a requested $150,000.  Conceptualized by famed Macross creator Shoji Kawamori, directed by the criminally underappreciated Kazuki Akane, and animated at Mobile Suit Gundam and Cowboy Bebop‘s Sunrise during their peak, this collaborative effort between some of the best resulted in something greater than the sum of its already massive parts. Masterfully blending elements of various genres that we don’t often see mixed together, Escaflowne remains a significant accomplishment in anime to this very day. 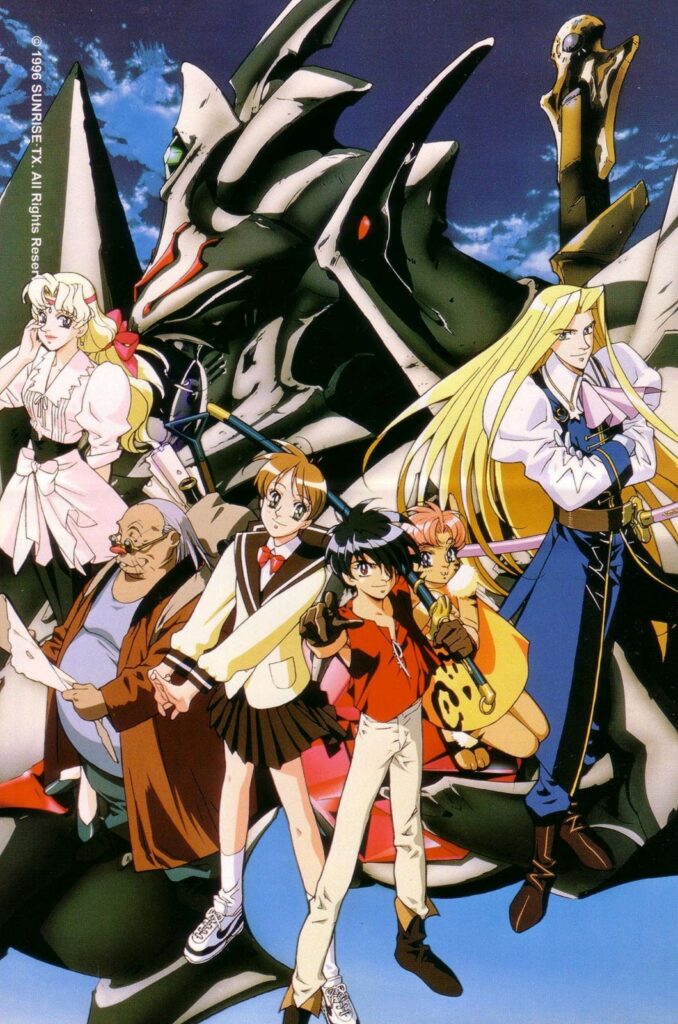 Drawing From Vastly Different Inspirations to Create Something Entirely New.

Shojo, Fantasy, and Mecha are all very broad genre terms that don’t actually tell you exactly what a show will be, but even then, only very rarely can an anime claim it’s in the middle of the Venn diagram between all three. Shojo and Fantasy isn’t all too uncommon with works like Fushigi Yugi being institutions, not to mention the entire Magical Girl subgenre. Classical fantasy and mecha’s a little less common, what with ‘futuristic’ technology and alternate versions of the distant past usually only coming together in JRPGs, but shows like Aura Battler Dunbine have bridged the gap. Shojo and Mecha’s the rarest intersection, as shows like Gunbuster aren’t really ‘Shojo’ despite their female protagonists. Clamp’s Magic Knight Rayearth also draws from all three genres to some degree; however, not only do the mechs not come into play towards the end, but it doesn’t push itself to the artistic and narrative heights of The Vision Of Escaflowne.

It’s not as if the creators of Escaflowne sought out to intentionally experiment with genres. On the contrary, creator Shoji Kawamori simply wanted to make a show about ‘robot and divine powers’ after inspiration struck while visiting far-away mountains in Nepal. That check out with how evocative the foggy naturalistic landscapes and fantastical takes on ancient architectures that compromise The Vision Of Escaflowne’s settings are. The show itself actually took years to get off the ground. It was trimmed from 39 to 26 episodes and spent years on hold after losing the incredible Yasuhiro Imagawa to G Gundam. That doesn’t sound good, and normally you’d want the director of Giant Robo to helm your show, but Sunrise giving Kazuki Akane his first chance at direction was the best thing that could have happened in the show. As enticing as lavishly animated titanic robot battles in mystic lands (with a love triangle to tie it all together) would have been on their own, Akane’s fingerprints imbues a grounded human element to the entire affair, allowing the audience to empathize. 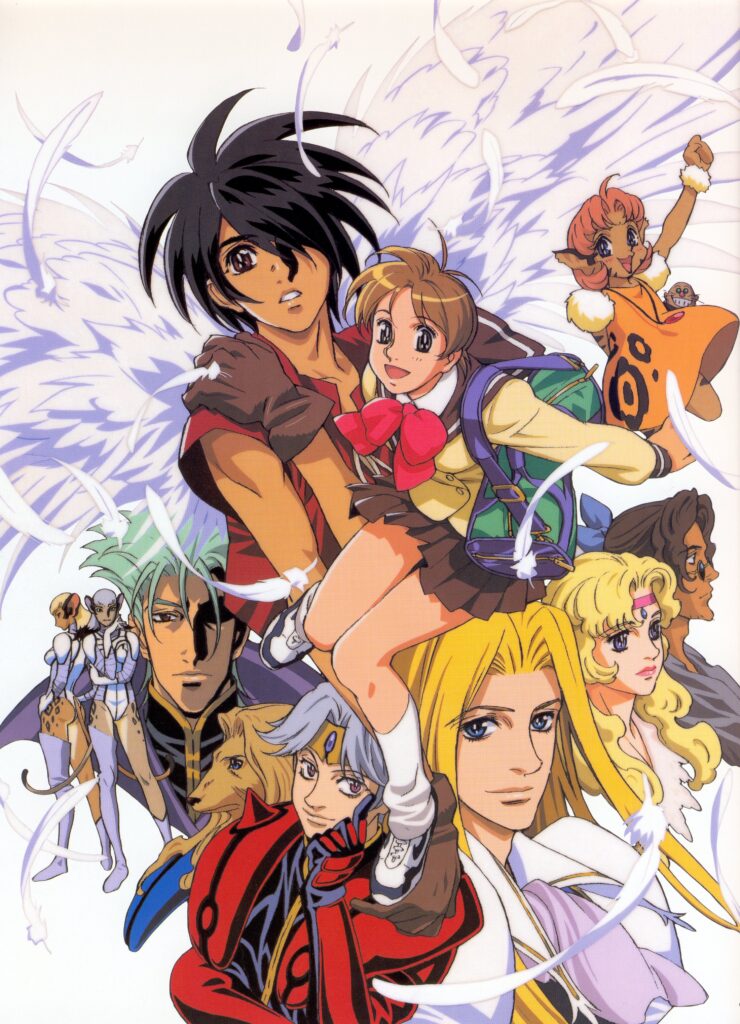 An Unforgettable Trip to Gaea and the People Hitomi Meets Along the Way.

Hate to use this phraseology, but The Vision Of Escaflowne could be considered something of a proto-isekai work. Hitomi’s your average highschool girl in the track and field club, when one day, in the middle of running a very important race, a mysterious boy named Van and a whole ass dragon he’s dueling manifest out of nowhere. He’s able to take out the Dragon despite the culture shock, but when he gets transported back, Hitomi gets dragged along for the adventure of a lifetime. What separates this from your dime a dozen light novel inspired isekai shlock, aside from Hitomi being a girl protagonist, is that Escaflowne doesn’t serve as wish fulfillment. Sure there’s something of a love triangle between her, the hot-headed prince Van Fanel, and mature Allen Schezar who commands his Kingdom’s army, but neither is the romance the focal point of the show, nor does she ever become some over-powered party leader. In fact, she doesn’t even pilot the mechs, the boys do, but with her sharp tongue and aptitude for divination, she’s no damsel in distress either.

Much more important than the background romance, with the show never entering ‘love story’ territory, is the ongoing war between Gaea’s smaller territories, of which Allen’s Kingdom is one, and the Zaibach Empire hellbent on world domination. This conflict takes Hitomi and co all over Gaea, meeting many colorful characters, leading to Hitomi experiencing new joys, significant loss, and growing up some along the way. As Allen and Van’s backstories (which involve surviving a genocide and unspoken royal affairs), begin to unravel, the viewer can’t help but feel they’re traveling on the airships with them for the entire ride. Kazuki Akane’s down-to-earth direction paints each of these characters as multifaceted, giving a real-world weight to their lives and the magical world they live in. Even those from the Zaibach Empire get the same nuanced character exploration, making them integral to the Escaflowne experience.

The Vision of Escaflowne Just Looks So Good.

Kicking off what might be called a Golden renaissance era for Sunrise with Cowboy Bebop, Outlaw Star, and The Big O following in the next few years, The Vision Of Escaflowne isn’t only one of the best anime of the 90s but one of the best looking TV animations ever made. As if hand-animating the beloved Gundam Wing robots to polish wasn’t enough for Sunrise, they really stepped it up in 1996. Shoji Kawamori and Kazuki Akane really gave us a best of both worlds situation in terms of both the quality of the animation and how inspired the visual style of it all was. From start to finish it never drops the ball, either with its scratchy yet fluid hand-drawn animation or with its dynamic settings that generate a palpable atmosphere.

We mentioned that Shoji Kawamori’s original pitch for The Vision Of Escaflowne came after traversing the mountains in Nepal, and that visual influence can be seen all over Gaea. With copious amounts of some of the most alluring depictions of nature you’ve even seen outside of a Miyazaki movie, and many wondrous architectures that scream ‘mystic temples’, you’ll wish you were transported to the planet in Hitomi’s place. The mecha of Escaflowne also uniquely fit the series, as they believably look like they were sculpted from clay and stone as opposed to being factory produced. As long as you don’t mind the larger than average noses that character designer Nobuteru Yuki loved to indulge in at the time (though ten years later his work on Paradise Kiss proved him to be plenty versatile) every second Escaflowne’s on the screen is magic for your eyes.

Escaflowne Should Be on the Anime 101 Syllabus

The Vision Of Escaflowne isn’t some forgotten treasure, as that 350k Kickstarter proved. However, it should be mentioned in the same breathes as your Neon Genesis Evangelion and your Revolutionary Girl Utenas; It’s a venerable classic for old school fans but, like our previous OTAQUEST Selects Martian Successor Nadesico, it’s one that hasn’t been passed down to the newer generations like Cowboy Bebop. This show was big enough to air alongside Digimon and Power Rangers on the classic Fox Kids Saturday morning cartoon block, albeit heavily edited, and that’s why Funimation decided to kickstart its new dub. With its unique fusion of genres and influences, and with the added level of visual polish and nuanced story-telling, I think The Vision Of Escaflowne should be a required watch for everybody.