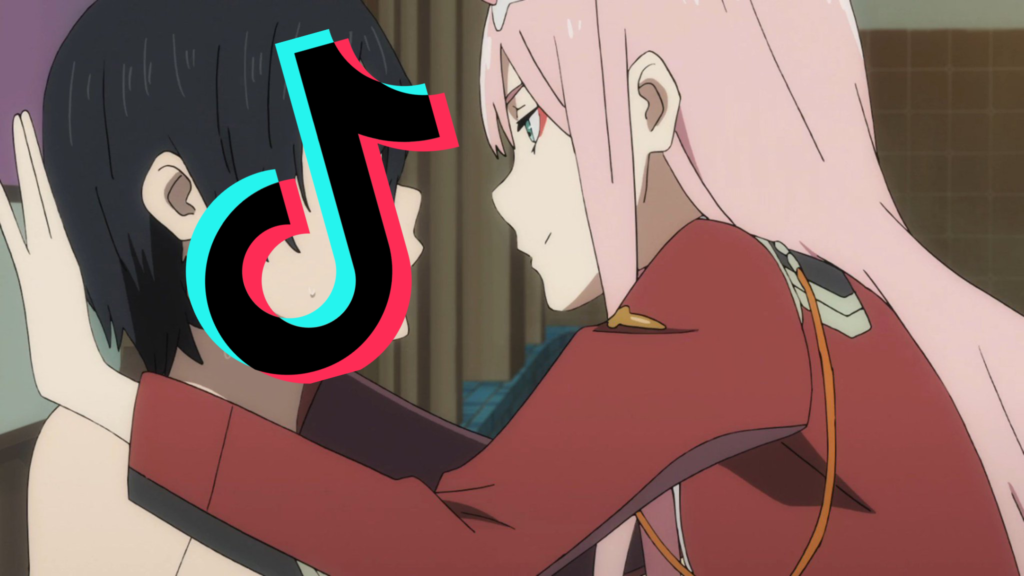 Social media has an unavoidable influence on every aspect of modern society, and when it comes to the media we consume, that impact is only amplified. Anime simulcast discussions are unavoidable on Twitter and Reddit, while manga chapters are analyzed and discussed on social media and in YouTube videos within hours of release. Away from anime, a glance at the discourse surrounding the broken nature of Cyberpunk 2077 shows how social media can amplify issues and force a response.

Still, while we understand how buzz on these platforms can help a show become more popular, it can be remarkably easy to overlook emerging social media platforms, and the quirks that algorithms on platforms like TikTok have. These algorithms drive both anime fans and those completely new to the medium towards a variety of series both old and new.

What is TikTok, and How Does the Algorithm Work?

Despite TikTok growing rapidly as a platform to a worldwide user base of over 800 million active users by July 2020, and despite dominating the news in the recent US presidential election thanks to Trump’s repeated attempts to ban the app, many are still unaware or misinformed on the app’s capabilities. To bring everyone up to speed, let’s start from the beginning: what is TikTok?

TikTok is a video sharing platform that rose to prominence for the app’s ability to allow its users to share short-form videos with others that range from 3 to 60 seconds in length. With users able to create their own sound to accompany the video or use other people’s sounds or popular music, users on the app will dance, educate, inform, and crack jokes in ways that take advantage of the app’s limitations.

The discovery of content created by other users is almost exclusively driven by the algorithm. While users can scroll videos created by those they follow (similar to a person’s Twitter timeline) most users discover new content in the app using the For You page. The For You page is the first thing a person sees upon booting the app, and this constant scrolling stream of content recommends new videos at first based on what’s popular, before gradually becoming more refined and informed by videos you like and users you follow.

Users spend most of the time watching users they don’t follow on the For You page, and it helps trends spread organically through the app.

Various factors play a role in a video being recommended. Alongside the demographics of the users you follow and content similarities, hashtags play a major role in recommending videos. If a user is liking several videos with #cats attached to it, the app is more likely to recommend more videos that feature cats.

The algorithm is far more complex than this not-exactly-basic explanation, but this is enough for our discussion. While the example of #cats I gave is rather broad, recommendations can become more and more specific the more time you spend on the app. Thanks to this, niche communities can form where the algorithm perpetually recommends videos based within a certain community niche on the app. It won’t be long before an anime fan could be sucked into the rabbit hole of cosplay TikTok, or anime reaction TikTok, which are videos you’re more likely going to want to keep watching.

Where Anime Fandoms and TikTok Intersect

With 800 million users on an application that continues to grow more and more popular by the week, it should be no surprise that there are many fans who rely on apps like TikTok to inform themselves about anime. After all, they keep seeing videos from other users that share their interests, which makes it easy to form a parasocial relationship with a certain creator who, upon cosplaying a character or mentioning an anime they like in a video, could be all that’s needed to drive them towards anime.

More than simply recommending an anime in a video, TikTok is home to trends incorporating anime that can shift the narrative on a particular show.

While each community on TikTok can be home to its own multitude of in-jokes and trends, some trends can spread beyond these communities thanks to the recommendation algorithm. One of the most popular trends across the app in 2020 has brought Jojo’s Bizarre Adventure to new audiences. The song ‘Jojo Pose’by Apollo Fresh took on a new life thanks to TikTok, where it became an integral part of a trend that saw audiences ‘posing’ to whatever they chose in time with the song’s chorus. To date, over 300,000 videos have been made using the sound with YouTube compilations racking millions of views.

Leaning more directly into how the algorithm functions to facilitate these trends, one of the more prominent recent examples centers on Muse Dash from Chinese developer PeroPero Games. How does an 18+ rhythm game from a Chinese developer suddenly become one of the top-selling games on Steam and boost the popularity of Zero Two from Darling in the Franxx?

If you use TikTok then you've probably come across the #MuseDash trend yourself. While it has taken on various forms at this point, it started out on Nov 8 as a simple live wallpaper video that had characters from the game in it

These videos captured the attention of many people pic.twitter.com/tmEf3qi9EX

Well, it all started when a video using characters from both Darling in the Franxx and the game itself dancing in time to a song. Summarized well in a Twitter thread by Daniel Ahmed, this soon led to users capitalizing on the viral success of the video to create their own content, creating derivative content such as reaction videos, videos featuring alternative characters, or people recreating the dance.

This is where the quirks of the algorithm amplified the success of the trend. Just as users will put their spin on a popular trend hoping they go viral, others, understanding that videos sharing the same hashtag will be recommended to users who like a particular hashtag, will tag unrelated videos to the trend with the same #MuseDash hashtag. Unsuspecting users may stumble on these videos, while liking it leads the algorithm to recommend more relevant Muse Dash content, aiding the trend’s spread.

Millions tuned into #MuseDash in the final weeks of November and early weeks of December, and the impact was noticeable. Not only did sales of Muse Dash increase, but according to Google Trends, searches for Darling in the Franxx reached their highest search volume in 2020 (one of the characters in the original video was Zero Two from the anime). The success of the trend in convincing people to watch the anime can be noted in how the search volume for the anime has continued to increase even as the Muse Dash trend has died down.

There are other examples, too.

Danganronpa is by far the most prominent series of characters featured in cosplay TikTok videos, thanks to the vivid, unique and easily recognizable character designs and fun costumes, as well as their poses. This is another example of a trend that spread throughout the app and beyond anime and cosplay audiences when, earlier this year, trends centering on Junko Enoshima poses and voice lines from the Danganronpa anime spread throughout TikTok.

Polygon covered the success of this trend and Junko Enoshima on the app in January when it was dominating the app’s algorithm, but this only tells half the story. The success of the anime and series has continued to grow even after the trend left ‘mainstream’ circles of the app, and mentions of the series were relegated back towards cosplay niches. Despite no new anime or games being on the horizon and with the last new game being released almost four years ago, interest in the series in Google searches is approaching its highest point ever. 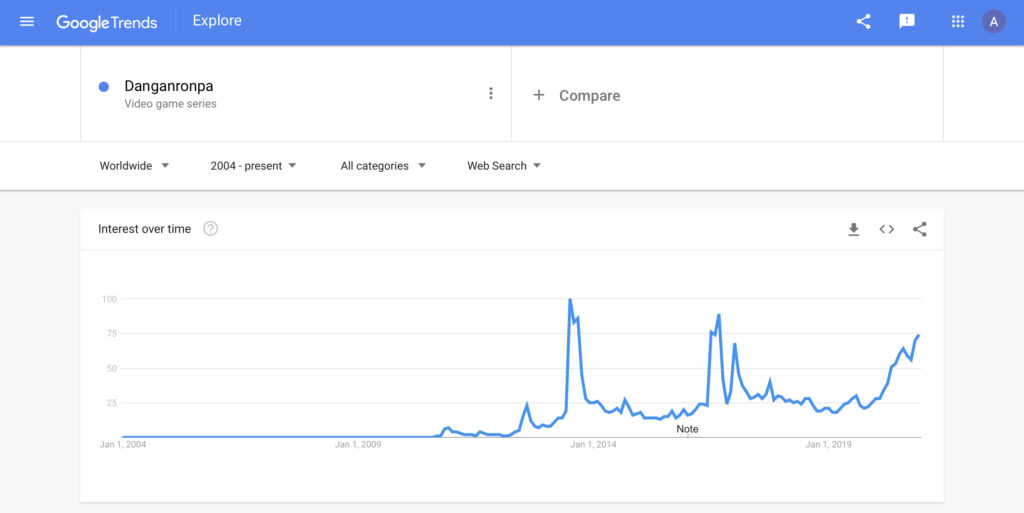 Kill la Kill, as well, has seen a mini-revival in popularity in part thanks to the Little Pogchamp meme. While that has since transcended both the anime and TikTok itself and is less associated with both of these by this point, interest in Kill la Kill increased slightly as a result of several TikTok videos being made using the sound, preceding the YouTube animatic that blew the meme to new heights.

Even ignoring TikTok as a specific instigator, it’s easy to forget that, as a fan, the people in our anime bubbles may not share the views of the wider anime community. I’m guilty of it as well! I spend a lot of time talking to a particular group of anime fans on Twitter and Discord, which isn’t representative of the larger group watching videos about anime who may not share the same interests. If the people I spoke to were representative of wider anime fandom, PreCure, not Demon Slayer, would be the largest anime in the world!

Still, as anime becomes ‘cool’ and reaches broader audiences outside of the always-online subset of long-term, ‘hardcore’ fans, the barometer for popularity is no longer in the hands of an impassioned Twitter commentator or a person writing for an anime website or blog. These fans won’t mind that Netflix releases Beastars months after the show has finished airing in Japan, as they’re informed primarily by Netflix recommendations. Your hairdresser will praise Seven Deadly Sins, and the shop assistant will talk to you about Darling in the Franxx after just discovering the show through TikTok a week ago, blissfully unaware of the conversations surrounding the show when it first released.

The reality is that anime is far bigger than it once was, and many are more likely to learn about a new anime through TikTok than me or others recommending it in an article. As much as some circles online may scoff at the idea of someone just finding out about an anime like Kill la Kill when they may have long since moved past the series, maybe we should embrace that.