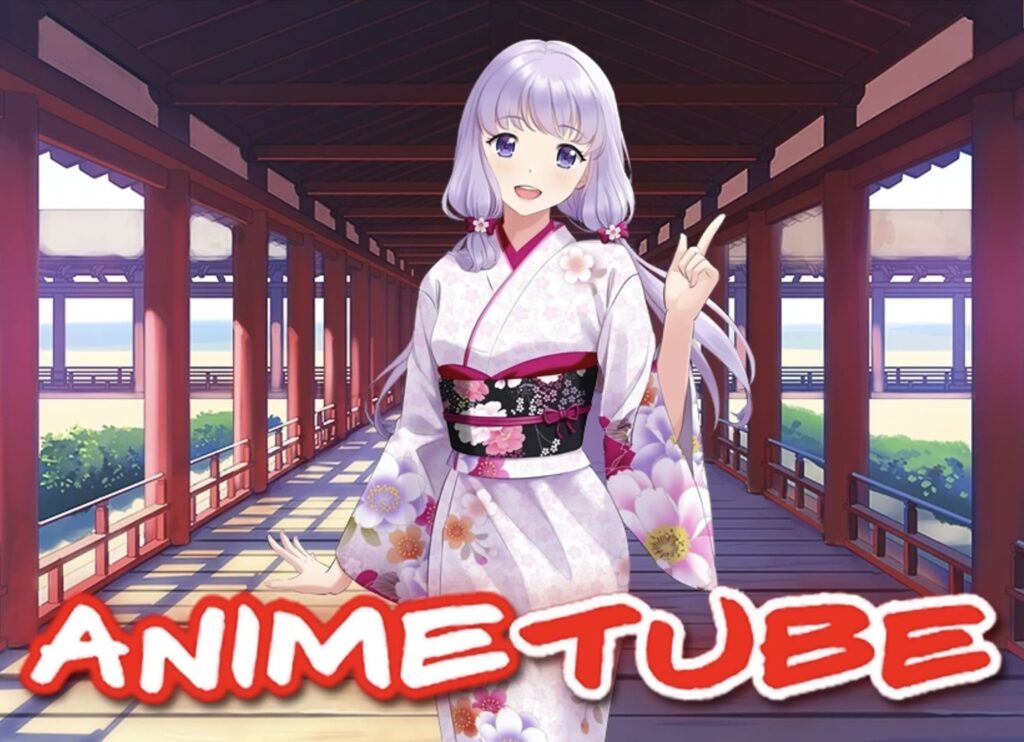 With a promise to host an anime library deeper than the likes of Crunchyroll and Funimation combined while introducing an AI virtual assistant, Anime Tube sounds like it has the potential to be an amazing new player in the anime streaming space. In theory, that is. A closer look at what this ambitious anime streaming service is aiming to achieve through its Kickstarter reveals several red flags, obstacles, and misleading claims, alongside a lack of understanding of how the anime industry functions.

That’s before we discuss the issues they’re already facing with major anime licensors since going public in the way they have.

Yet here we are, staring at a Kickstarter with a seal of approval from the crowdfunding website itself with over 220% of its initial funding. Unless the campaign is canceled, it will receive whatever money has been pledged to the campaign in just 28 days. Let’s dive into exactly what this Kickstarter promises, and pick apart why Anime Tube may not be the safe investment it claims to be. 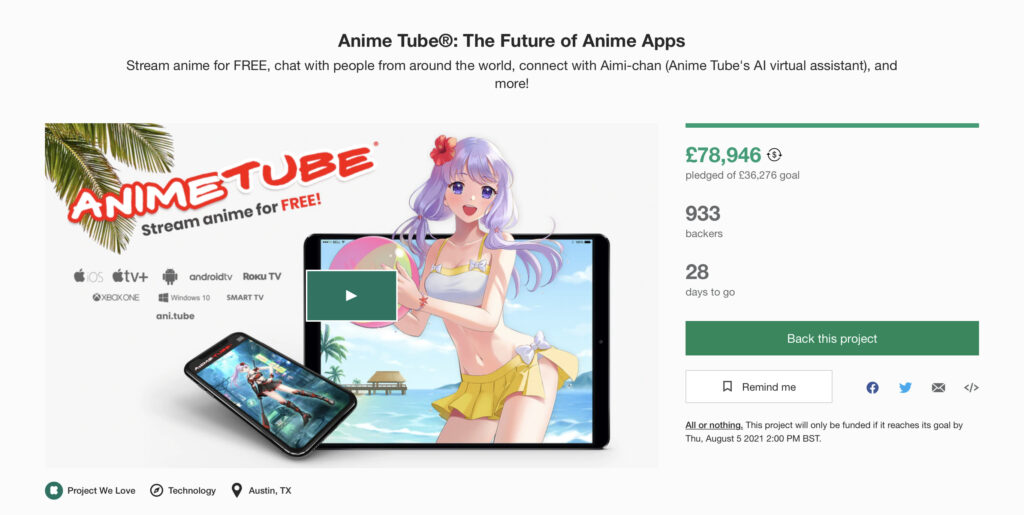 Anime Tube, as described in their Kickstarter, is ‘a new, multi-platform application product built from the ground up’ that plans to replace the ‘Netflix-style streaming apps that lack unique features and simply stream anime movies and shows’ with ‘the ultimate free anime app’. Alongside ad-free viewing, their subscriptions range from 100 shows at $0.99/month ($9.99/year) to 5000 shows at $5.99/month ($59.99/year). Some features promised alongside the anime content available to view include a live chat, customizable queue, and an in-app manga telling the story of their in-app assistant by the online comic artist group Merryweather Comics.

More competition in anime streaming, particularly at a time of expansion by both Sony (who now own Funimation, Aniplex, and are in the process of buying Crunchyroll) and Netflix, is far from a bad thing that could improve streaming for everyone. However, several claims make this plan at best naïve, and at worst deliberately misleading for those wishing to aid in the birth of this new streaming service.

The first comes from the titles they aspire to license and the use of anime content not yet signed to the company in the Kickstarter pitch to backers. To license 5000 shows when even the current largest legal streaming services like Crunchyroll only have around 1000 titles is an ambitious undertaking. The list of titles they plan to license (featured in a 19-page document now removed from their official website) does include the names of more than enough anime to meet this target, but the process of licensing these shows is far from simple.

A glance at the titles featured in the list includes several anime under exclusive licensing agreements with other streaming services, such as the Sailor Moon: Eternal movies recently released by Netflix as Original films, several Studio Ghibli films under exclusive licensing agreements with HBO Max and Netflix (depending on region) and Neon Genesis Evangelion, all shows that would be impossible to license under existing agreements. Many shows featured also seem to understate the difficulties that have prevented these shows from being accessible for many years, including beloved classics like Love Hina and shows such as PreCure (only recently licensed in a limited capacity by Crunchyroll). The list even includes anime like Chibi Maruko-chan, already available in English via the Japan Foundation.

Statements from the team in charge of Anime Tube have showcased a liberal interpretation of what it means for an anime to be under discussion, and therefore open to inclusion on this extensive list of titles. Shawne Kleckner, president of Right Stuf anime in possession of international rights for anime featured on this list such as Revolutionary Girl Utena, publicly responded to the company on Twitter noting they had yet to start any licensing discussions for their shows. In a now-deleted tweet responding to the claim, they stated that they had contacted Shawne via LinkedIn and were yet to receive a response. 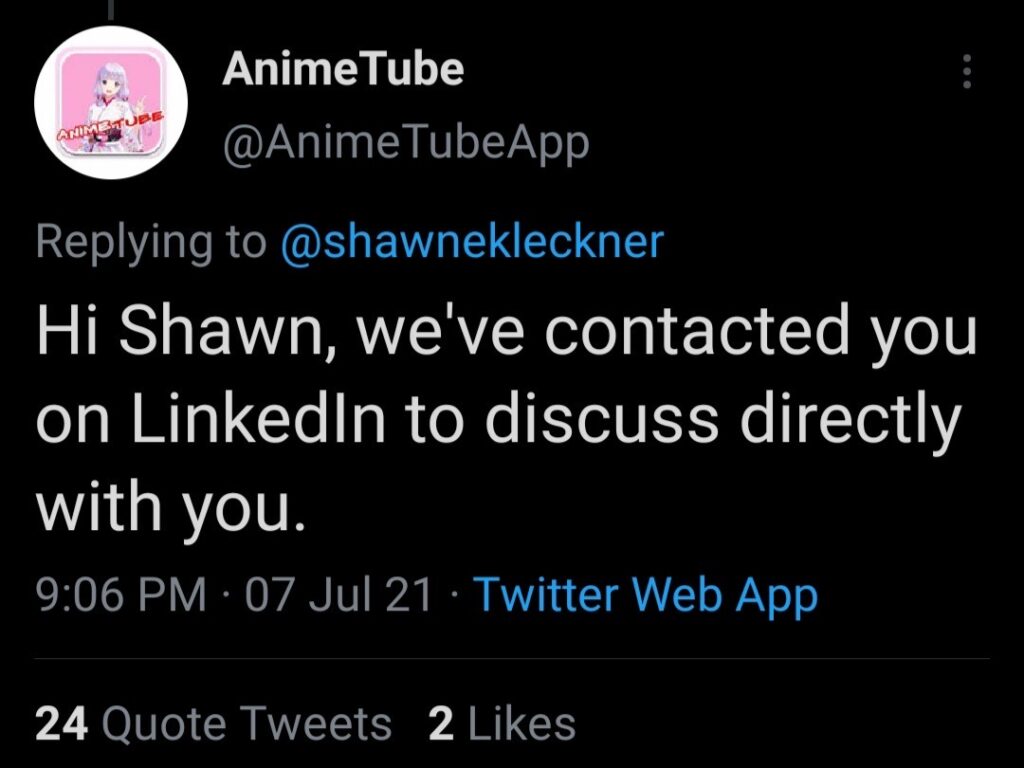 As the company admits in their Kickstarter, no anime has been licensed at this time. The company notes that they ‘have already met and have several meetings scheduled for the near future with anime production companies to get licensing agreements in place’, with the Association of Japanese Animations (whose name is spelled incorrectly in the Kickstarter description) supposedly assisting with the licensing process. So far, unless the company can definitively state otherwise, the use of imagery from shows like Death Note, My Hero Academia, and more is misleading.

If the company is planning on licensing any of the anime on their extensive list or featured in their promotional material, promoting the service with these shows without finalizing terms to distribute them will be problematic down the line. Alongside the problems that come with disclosing contractual discussions without any deal being signed as is the case with their list of anime under discussion, Japanese licensors can be strict on the use of their artwork and logos that require production committee approval for use in a promotion or official apps. The fact that such permissions haven’t been granted by any of the committees in charge of the anime featured in their campaign could be problematic if the company wants to license these or any other shows by these companies in the future.

This is all without discussing the costs of licensing these anime. In the $50,000 goal for the Kickstarter, no money is set aside for licensing. The company’s goals note $40,000 for the vague category of ‘development’, with $10,000 being set aside for professional fees. Despite being listed in the Kickstarter, things like the AI virtual assistant and live chat are included in stretch goals that have yet to be met and would require an additional $170,000 of funding to achieve. Even then, at $220,000 no money would be set aside for licensing, with a belief that ‘the Japanese anime industry is moving towards providing anime for free (with video ads)‘. Funding for fulfilling backer rewards that range from posters to figures is also missing.

In reality, the anime industry is trending in the opposite direction. Because of the growing popularity of anime around the globe that has seen international revenue become a primary driver of industry growth, high demand is making the licensing of new shows more expensive than ever. This reality has driven the rise of international co-productions, with Crunchyroll and Funimation increasingly funding shows in production in exchange for a place on the committee, merchandizing opportunities and, crucially, exclusive licensing agreements. Odd Taxi from the recent anime season is a perfect example of this.

Netflix is funding original productions for the same reason: doing so provides them with a library of anime, only available on their service, that will ensure fans flock to their service over the competition. Far from the claims being made by Anime Tube, anime licensing is more corporate (and expensive) than ever. Licensing older shows has its hurdles, too, and is a niche currently satiated by established physical distributors like Discotek and services like Retrocrush.

On top of this, to license their massive 5,000 show library, the company expects to complete this acquisition process in just two months ahead of a planned December launch. While their subscriptions plans are tiered based on how many shows the company has successfully licensed by the planned December launch date, even licensing 100 shows in a short, two-month window is a difficult task.

The question marks raised by Anime Tube don’t stop at just this Kickstarter. This is Game Face LLC’s second attempt at launching their Anime Tube Kickstarter, and a look at this failed campaign, featuring additional details on the company’s view on the logistics of licensing and running an anime streaming service, further exposes the problems that the company may face when trying to act on the promises made in this new crowdfunding initiative.

This older Kickstarter was launched on 6 June and canceled one week later on 13 June. Unlike the current Kickstarter, this had a far more ambitious $285,000 goal and ended its campaign with just $63,278 raised. Alongside confirming the company’s lack of finalized agreements as of 8 June (‘our licensing acquisition is an effort in progress’), this campaign dives further into how the company plans to achieve its ambitious dreams.

This expanded goal includes $100,000 for CMS fees and an additional $100,000 for web application development. In the new campaign, these costs have seemingly been brought together under the $40,000 target the company has on their ongoing campaign. $50,000 would have been set aside for business development, with just $20,000 being set aside for travel to Japan to speak with licensors.

Needless to say, such a low amount would struggle to license up to 5,000 anime at a price as low as $4 per show (or as high as $200 per show with 100 anime licensed at launch). Just $10,000 has been set aside for legal fees, finance and translation costs for the shows being licensed in this original plan, an amount that would come out at just $2 per complete anime. While the undervaluing of the costs associated with licensing and translating is one issue with this original campaign, it only raises further concerns on the new campaign when this new campaign has no provision for any of these costs.

What becomes clear when exploring further into the ambitious plans of Game Face LLC and Anime Tube is the unlikely ability that the company can achieve its lofty goals without external investment far beyond what the Kickstarter could provide. Looking further into the claims made by the company showcases a lack of experience required to launch an all-new streaming service and acquire the list of titles necessary to fulfill their aims as stated on their website and in their ongoing campaign.

Yet this is a campaign legitimized with a ‘Projects We Love’ endorsement from Kickstarter themselves that now sits at over double its initial funding goal. As things stand, it’s hard to imagine a situation where many of the people backing this Kickstarter campaign won’t lose all the money they put into it in the hope of a streaming service they can believe in.

It was our first offer to do a sponsored comic, and the money was honestly pretty good. Our team and I looked into it, and found while we thought it was a very ambitious project, we expected outside investors to cover costs, not just kickstarter money.

Whether the campaign will end successfully, and attempts are made to launch this service, remains to be seen. Even in the time taken to put together this article, the money spent to launch a sponsored comic with Merryweather Comics has been refunded by the creators, with posts discussing Anime Tube deleted. Regardless, until much more has been clarified about the direction Anime Tube wishes to take to find success in an ambitious market, it would be best to hold off on backing any Kickstarter campaign at this time.

Anime Tube did not respond to requests for comment at the time of publication.

UPDATE: As of 10 July, the Kickstarter campaign for Anime Tube has been suspended by the service for violating Kickstarter policies, while the public Twitter account for the service has also been deleted. The company have stated on Facebook that they wish to appeal this suspension, but the result of this appeal remains unknown. The company has yet to respond to claims made by industry professionals regarding the authenticity of the campaign, or respond to our own questions and request for comment.